You can now make good on all of your threats to flip the table thanks to arcades in Japan. Arcades are commonly called gesen, a shortened version of the Japanese-English word gemu senta (ゲームセンター). Although living out your table-flipping fantasies is probably reason enough to go, these places are a great way to spend a few hours if you are temple and shrine-ed out or if the weather isn’t cooperating with your itinerary. It's also a cool way experience something other than typical tourist areas for a more well-rounded image of what life in Japan is like. This is why I included a stop at the Asakusa branch of the game center Taito Station when my friend Linn came to visit me from the U.S. Curious to see what two Americans thought of a Japanese game center (and to get her game on), my Japanese coworker Chiharu came along for the ride to introduce Linn to some of Japan's more unsual games. 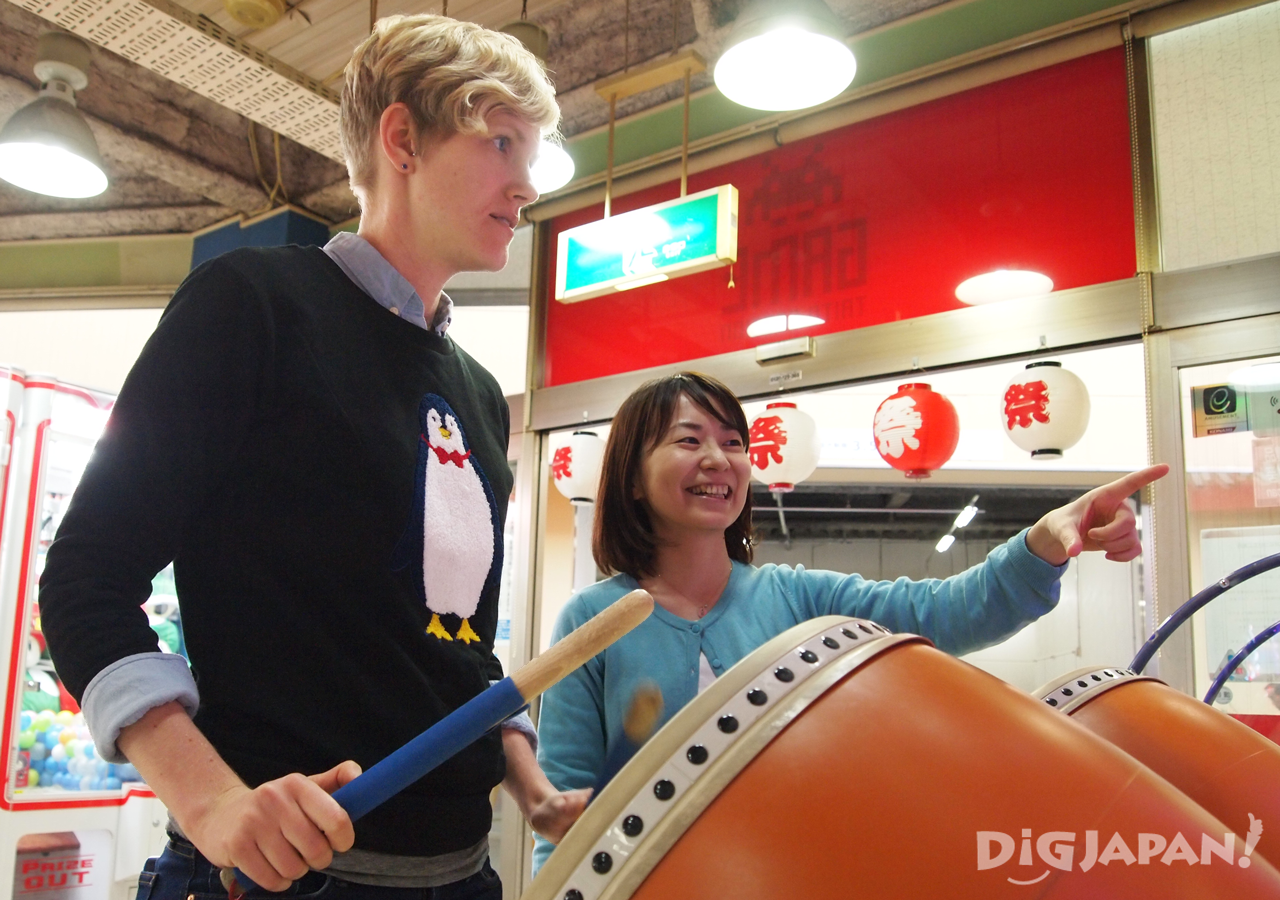 Chiharu explains how the game works to Linn.

The first game we introduced to Linn was Taiko no Tatsujin (Taiko Master). This is a rhythm game where you score points by beating a taiko drum in time with the notes that scroll across the screen from the right as your selected song plays. The basic game play is easy. You hit the face of the drum when you see a red note called a don  (ドン) and the rim when you see a blue note called a kat (カっ). You hit the drum in the correct place with one drum stick—called a bachi in Japanese—for a small note and with both for a big note. The majority of the songs available on the machines are Japanese, especially pop songs, so fans of J-pop and rock are going to have a bit of an advantage over those who aren’t. Either way, it’s a lot of fun. 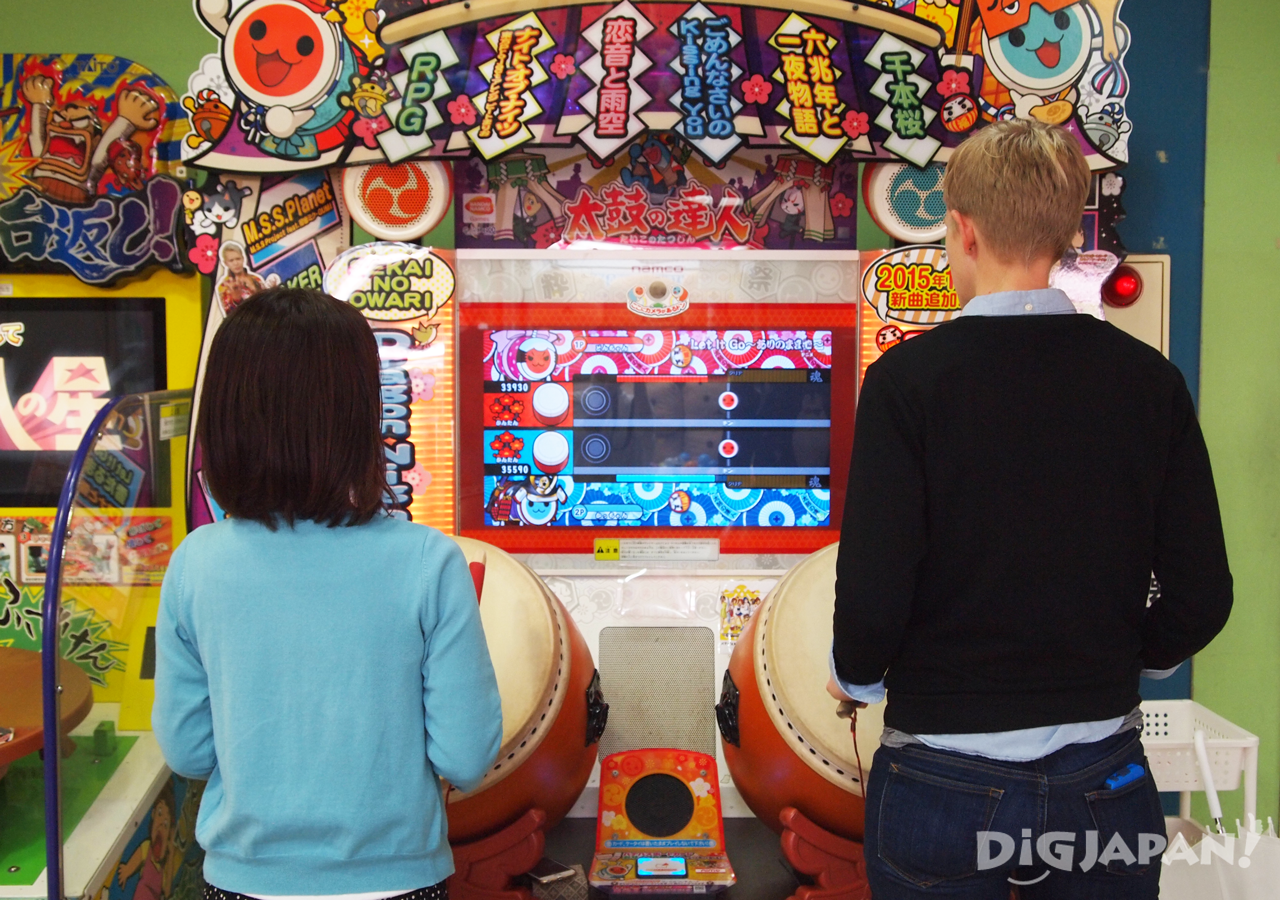 Linn and Chiharu play to see who is the real taiko master.
（C）BANDAI NAMCO Entertainment Inc. 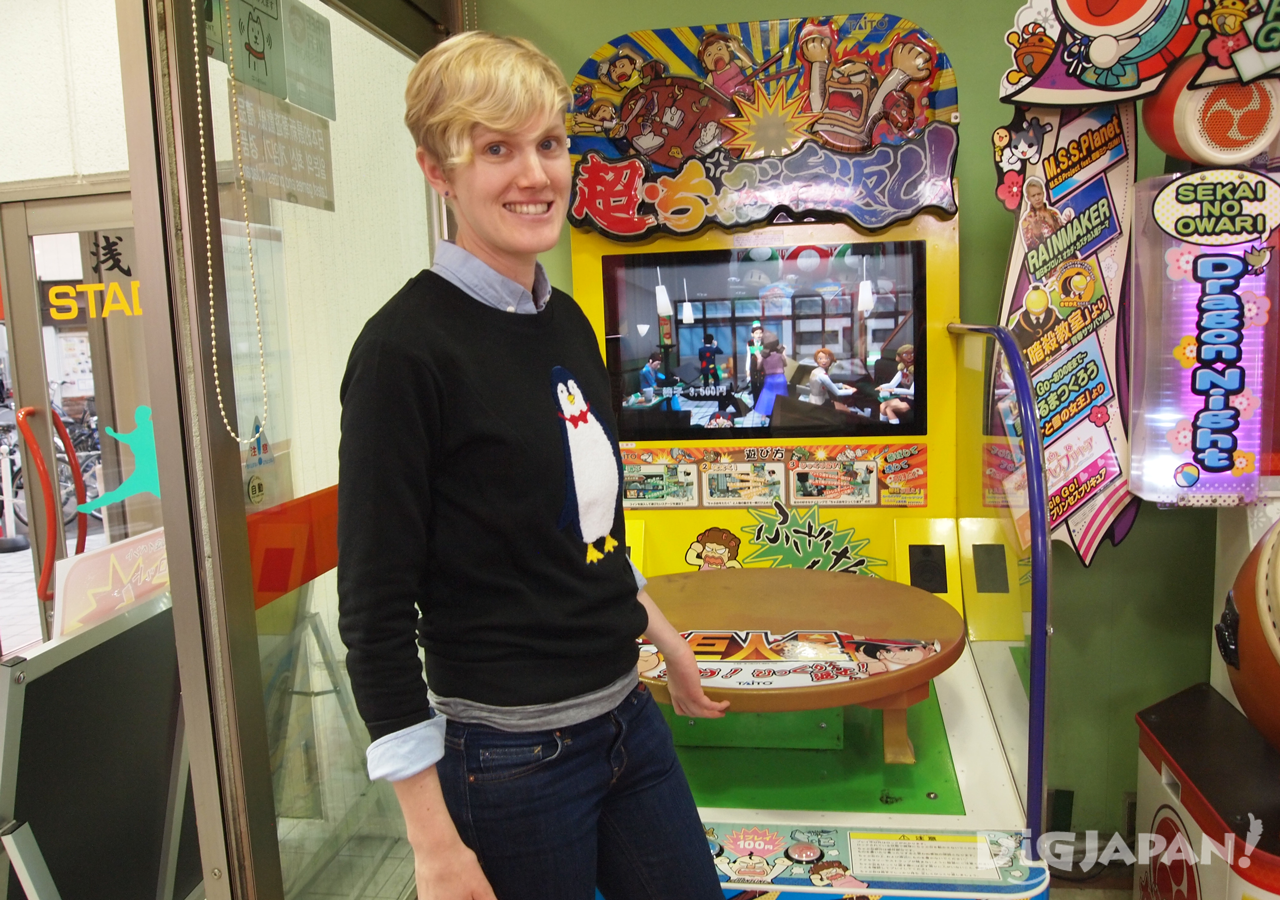 Linn gets ready to release her pent up anger by flipping a table.

The satisfaction of flipping a table is a cross cultural thing. Japan's taken it one step further by creating a game where you can experience that joy without doing any actual damage to property or your relationships. It’s a game called Cho Chabudai Gaeshi, meaning Super Flip the Table. In the Japanese context, the table getting flipped is a specific type called a chabudai—a low legged table around which people would sit on the floor to drink tea or eat a meal. (My coworker was impressed that the English expression didn’t limit the table-flipping to just one type of table.) 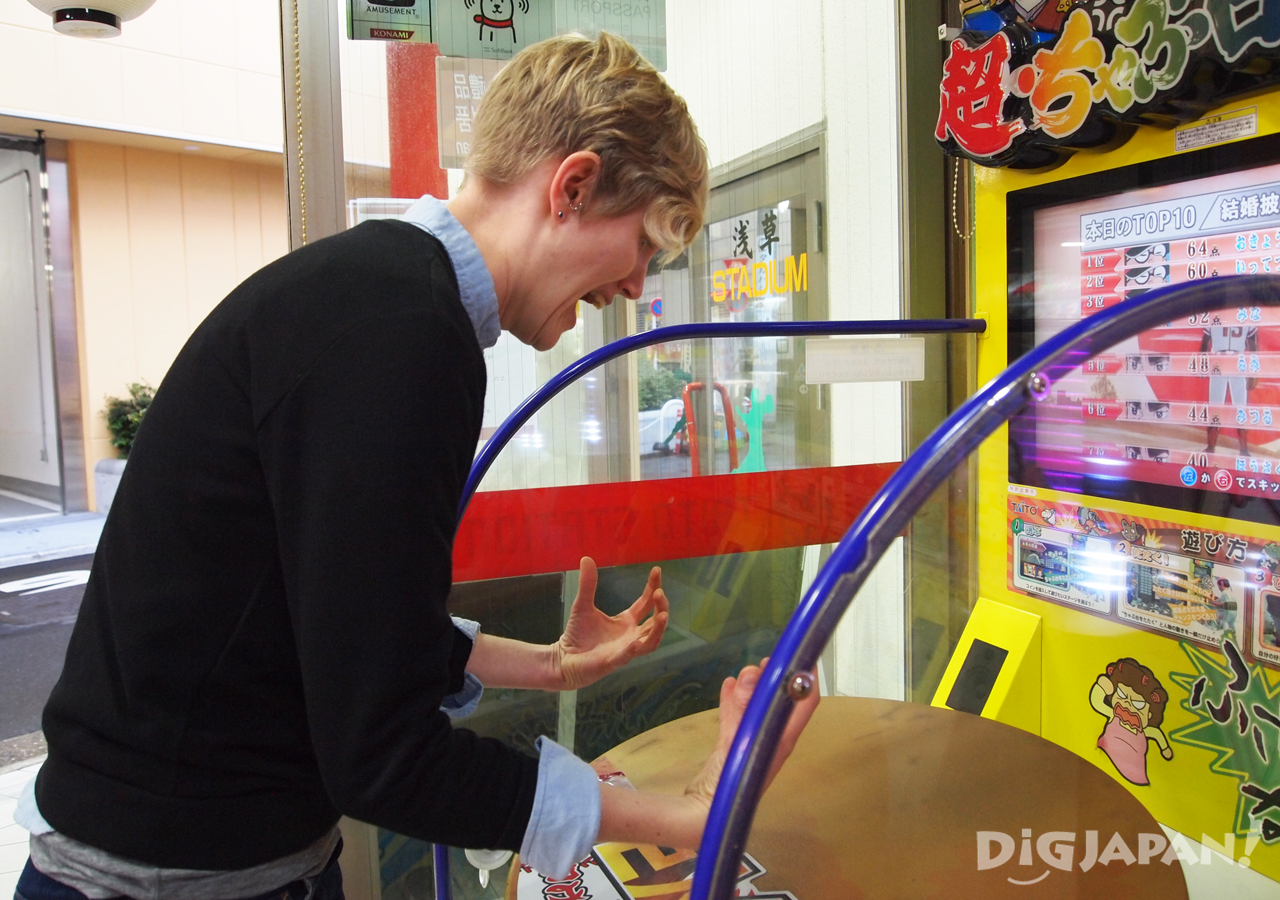 Maybe she's getting a little too into this game...

This game isn’t available at every game center, but you can find it at Taito Station’s Asakusa location. You can choose from various settings in the game in which your character will become increasingly irate until you flip the table. Settings include a father who’s had it with his ungrateful kids and nagging wife (the stereotypical scenario), a corpse irritated with the guests at their funeral, a bride who's totally over her reception, and so on. Linn chose a good one: a part-time worker at some nameless fast food chain who can’t even anymore with rude customers and lazy coworkers. 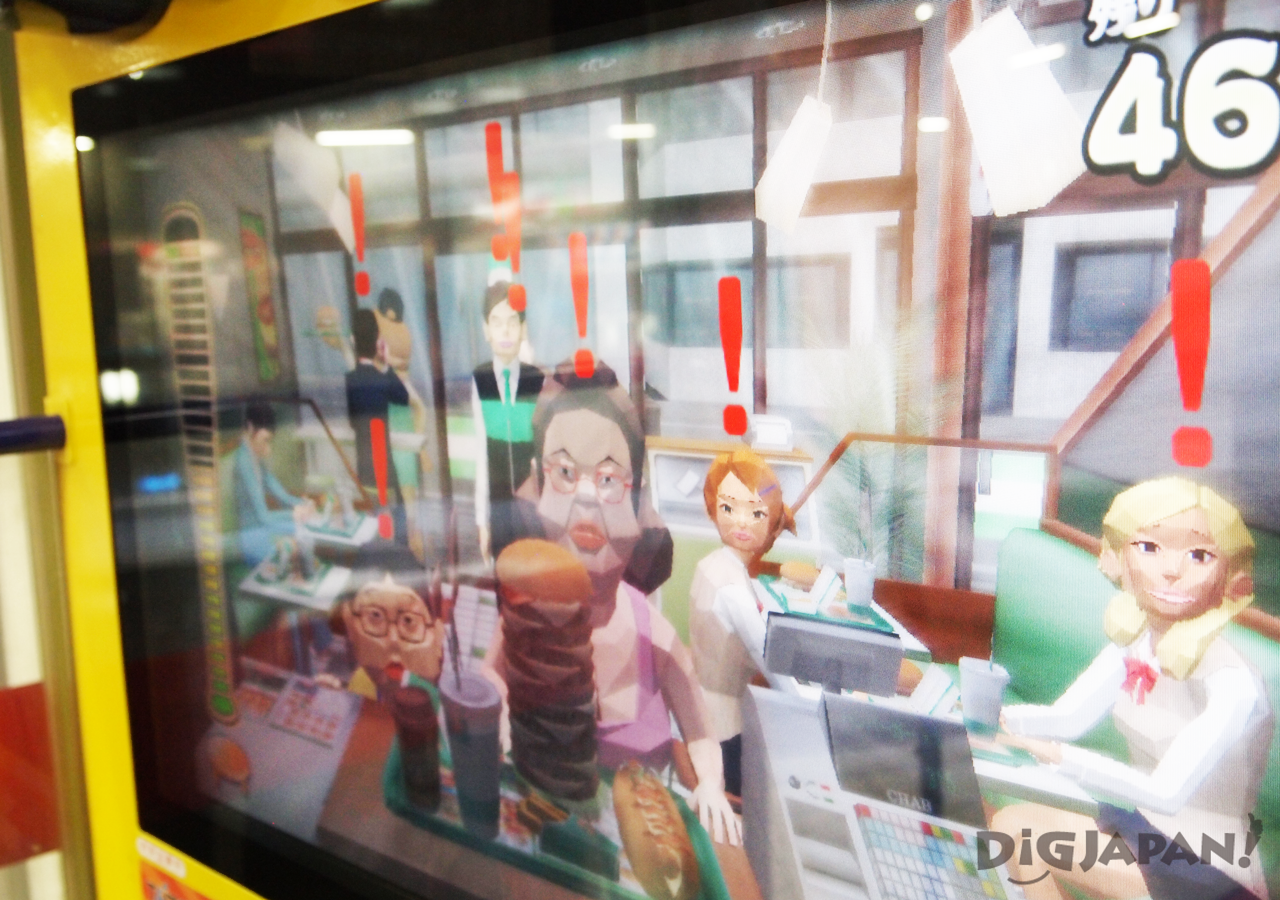 Here’s how it works: you have a set amount of time to express your increasing rage by banging your fists on the table. This charges a power meter to the left of your screen and gets the attention of the people in the scene (not enough for them to start behaving better, of course). When the power meter is fully charged, it’s time to flip that table as hard as you can. 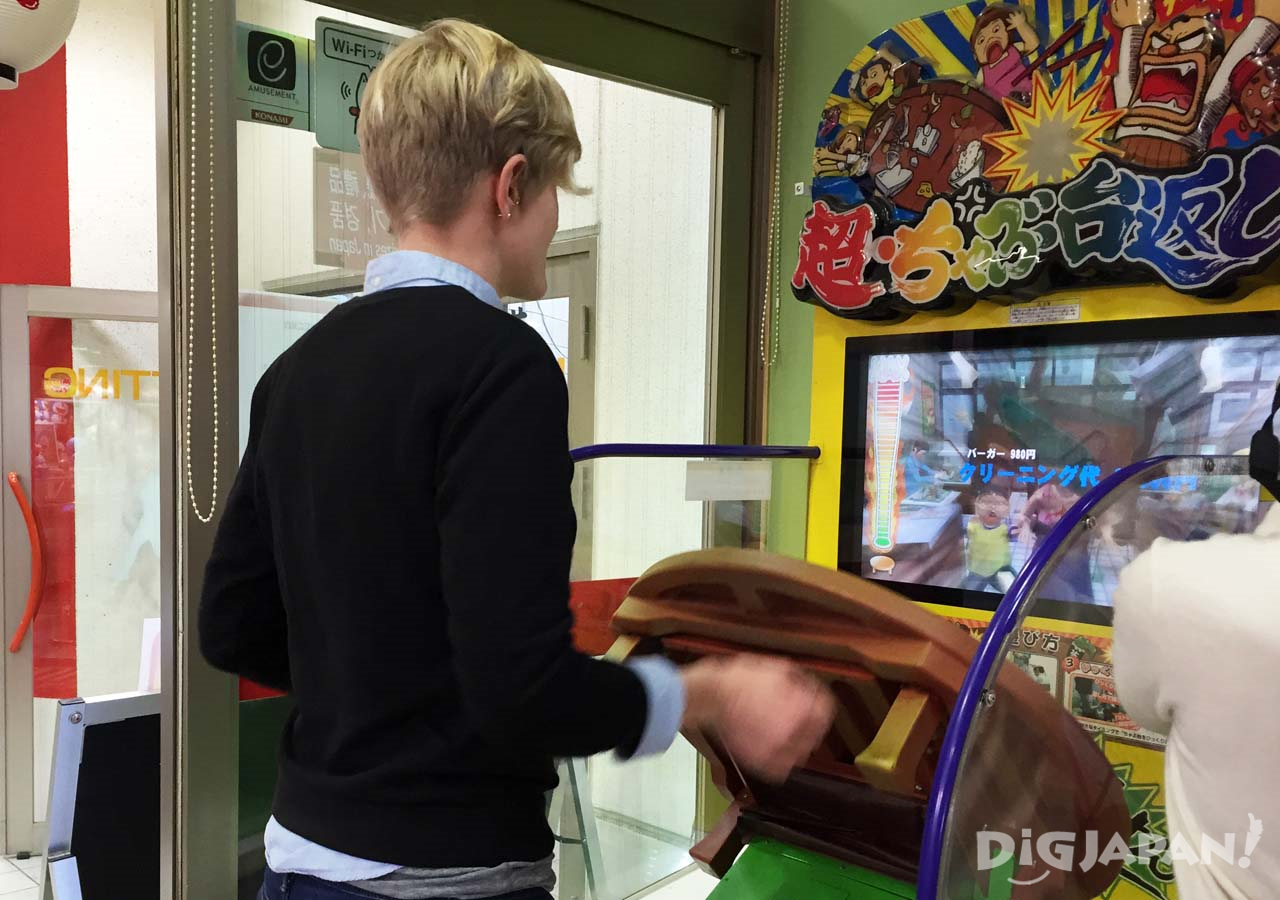 How far you can flip it depends on how charged the meter is. After you’ve flipped the table, you’ll get a breakdown of the carnage you inflicted. Linn got an amazing “damage ratio” of 91% and a total score of 100 points! 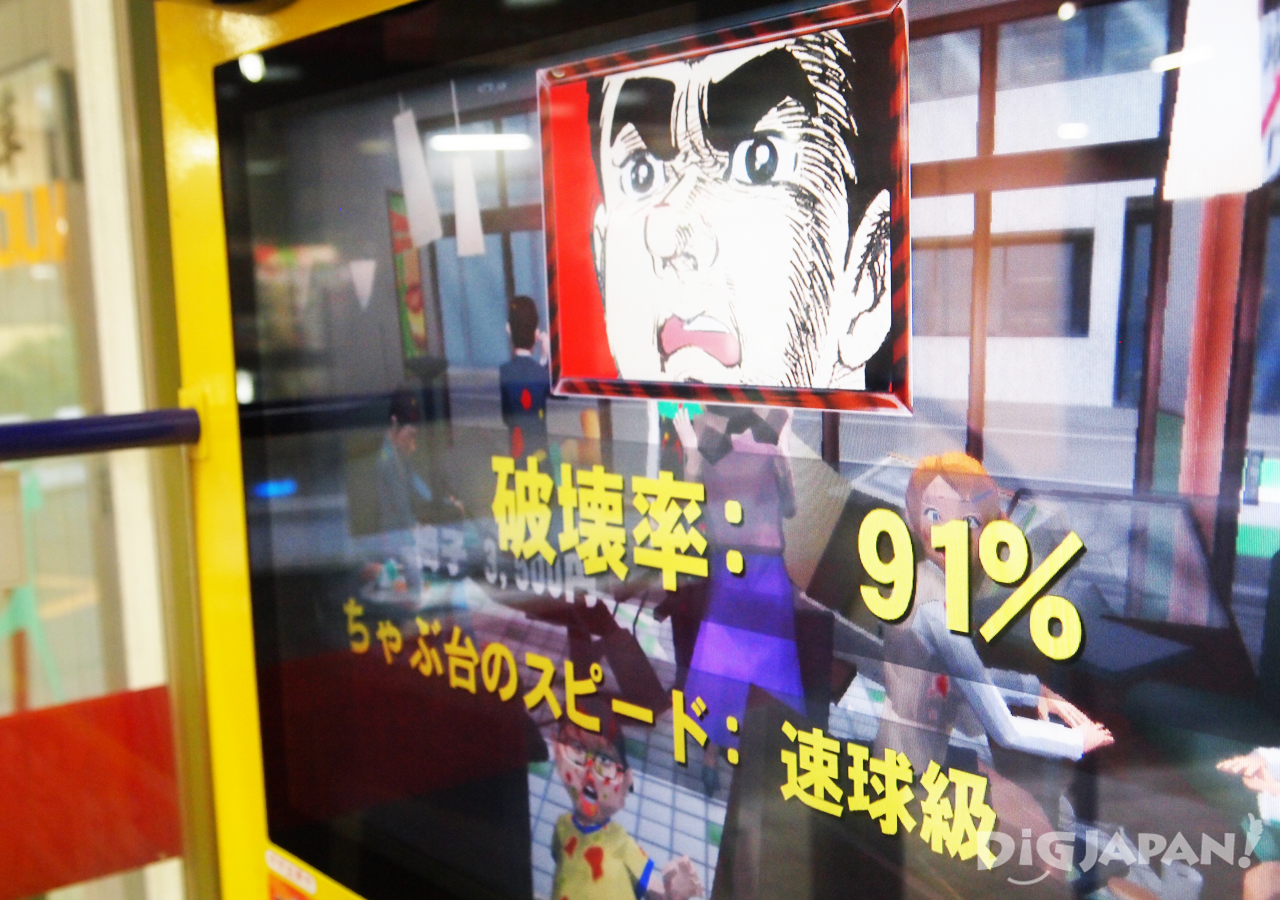 Now I know not to mess with Linn... 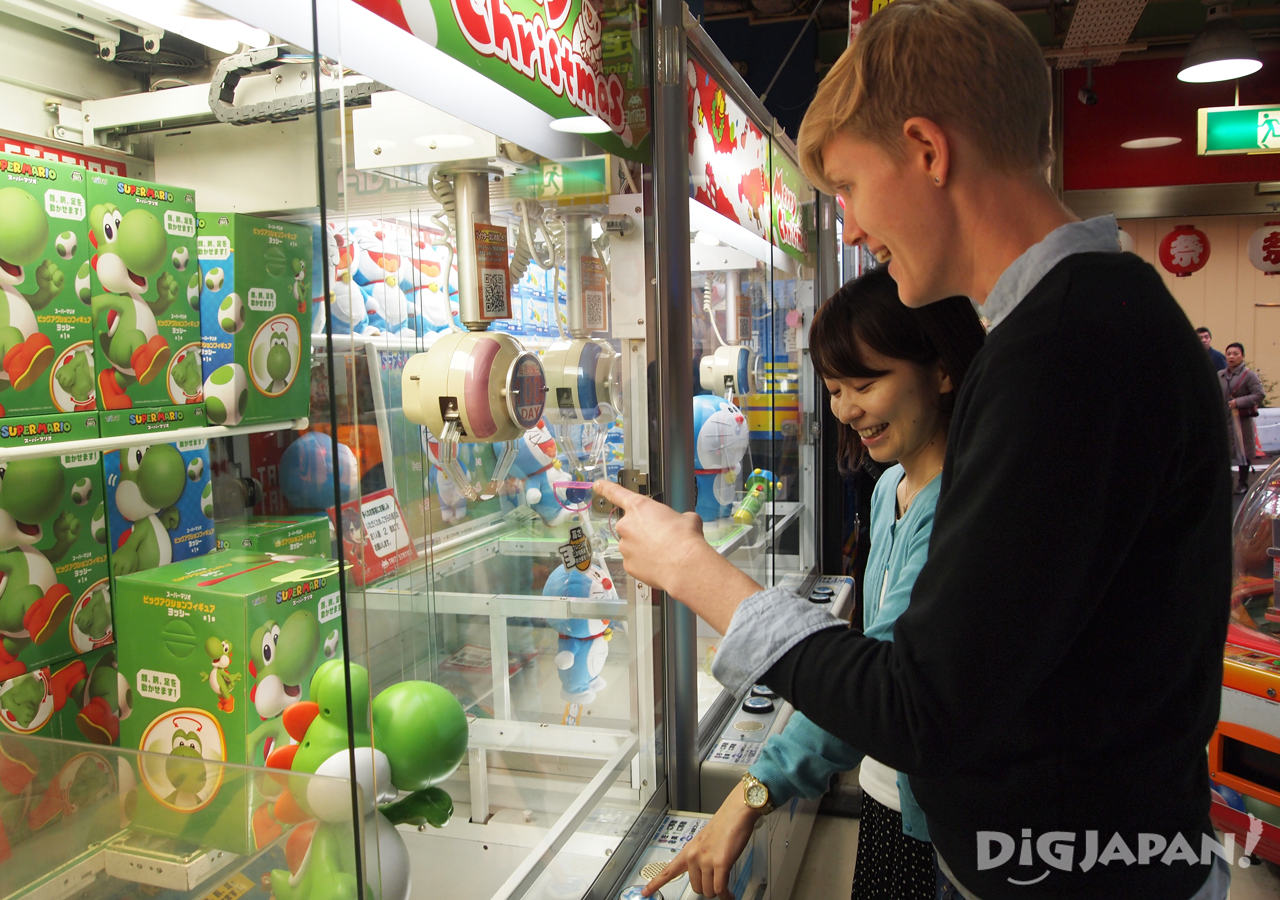 Linn and Chiharu form a plan of attack.

So these may not be that unusual, but you just can’t beat a classic. Crane games in Japan are every bit as infuriating and addictive as the ones at home.  The prizes range from candy to figurines to adorable plushies of popular anime characters and everything in between. No guarantees that you'll be able to win anything, but it's fun to try. However, it might be a good idea to hand your wallet over to a responsible friend who can prevent you from having a fourth “last try.” 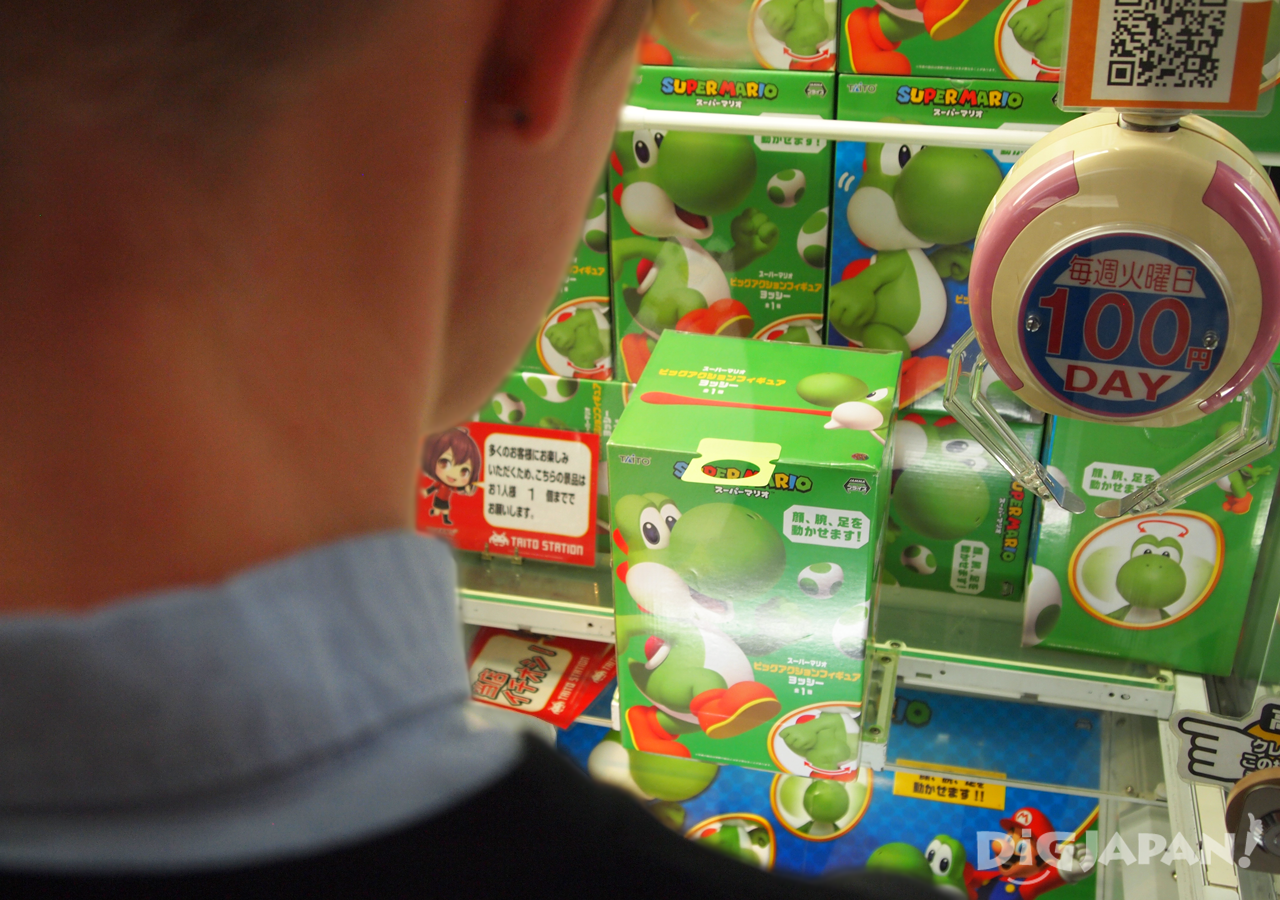 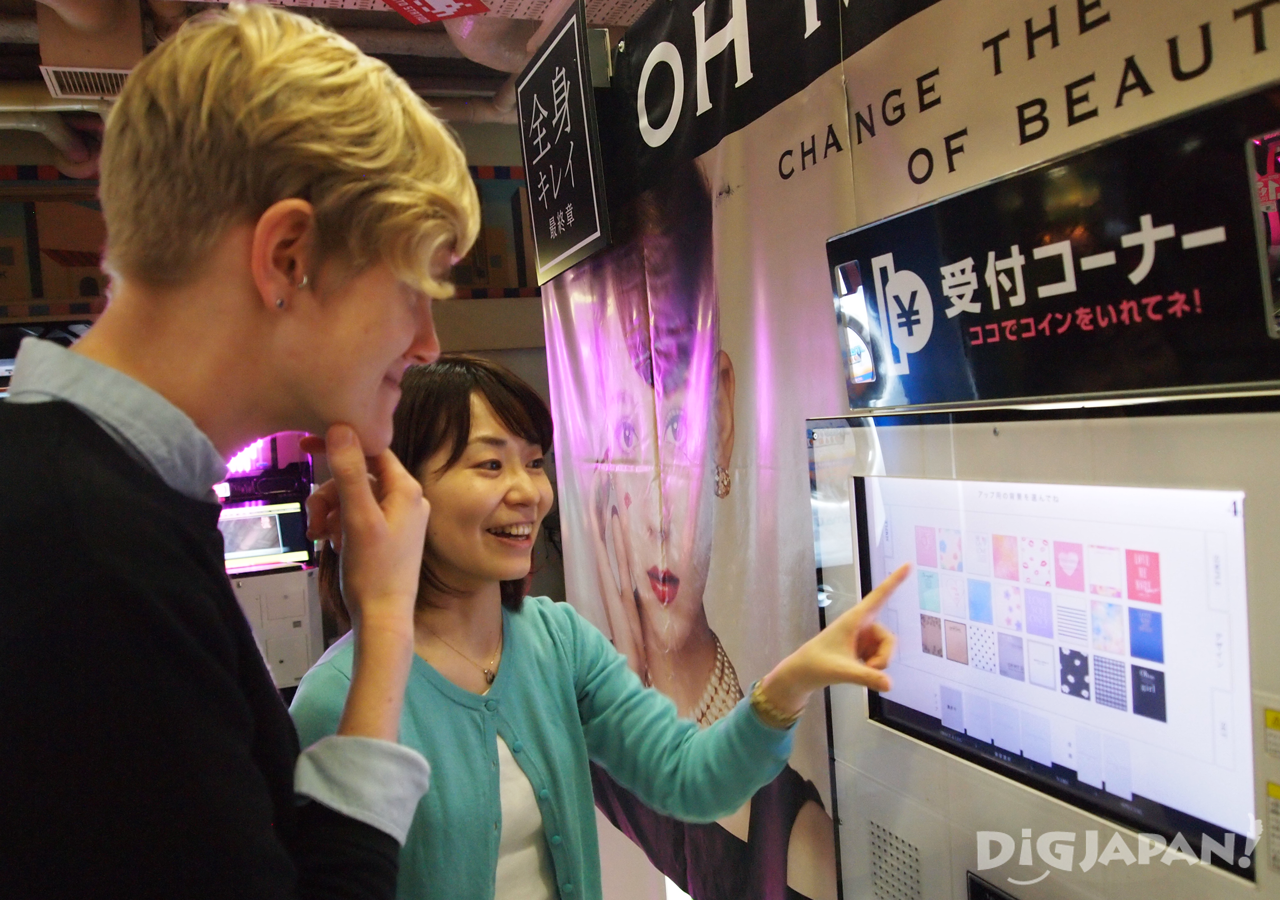 Linn and Chiharu give their background options careful consideration.

Photo booths aren’t all that common in the U.S. anymore, but you’ll find them in just about any game center in Japan. These aren’t your typical photo booths, though. These are purikura. These things have special filters that can “beautify” your appearance—that is to say, they can make your skin paler and your eyes (comically) large. The exact filters and the degree to which you can use them to manipulate your appearance depend on the exact machine. Linn was a little weirded out by the concept. 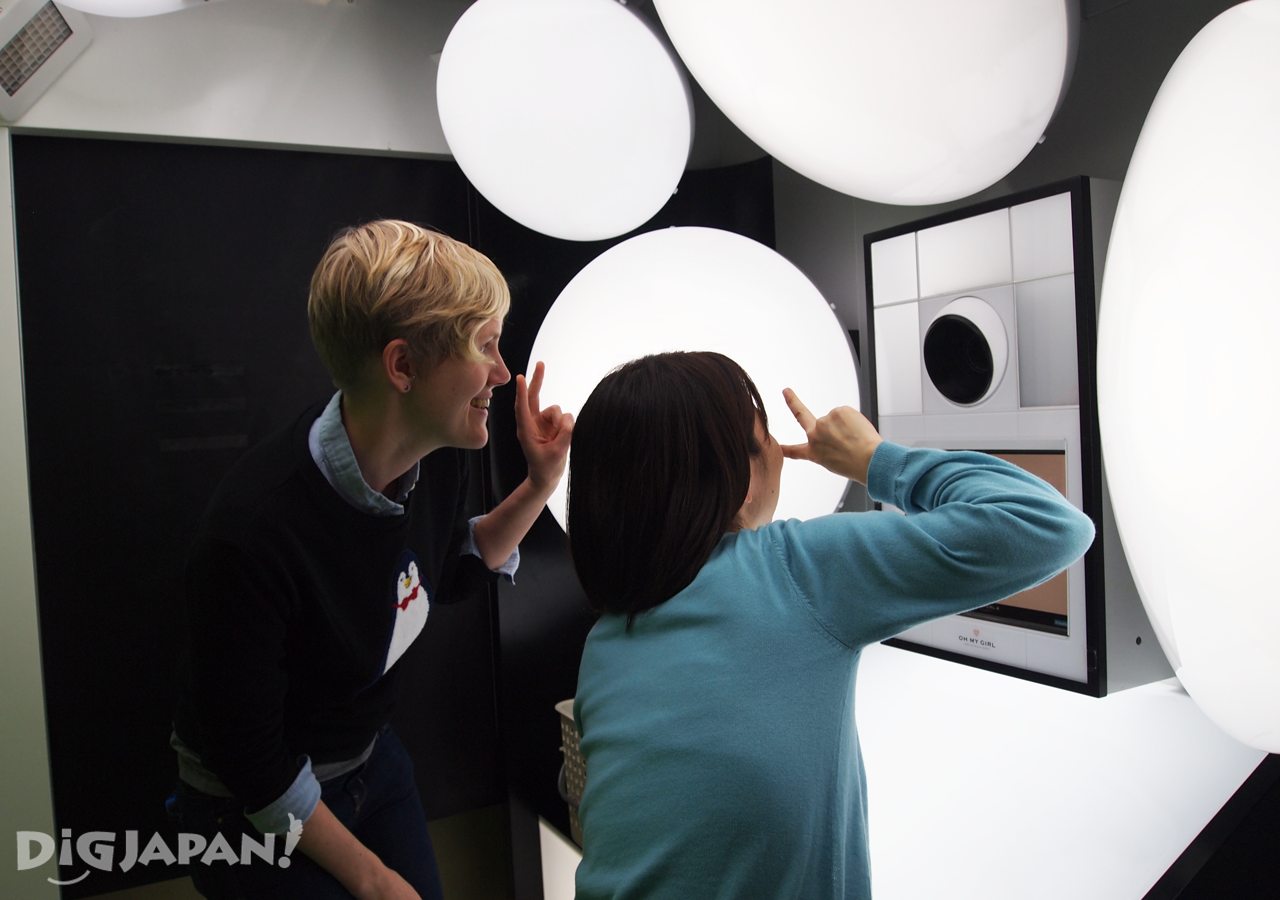 After selecting the background colors, you step inside the booth. There’s a screen inside that will prompt you to pose and show you what you look like. You can't retake your pictures, so make sure you work it! 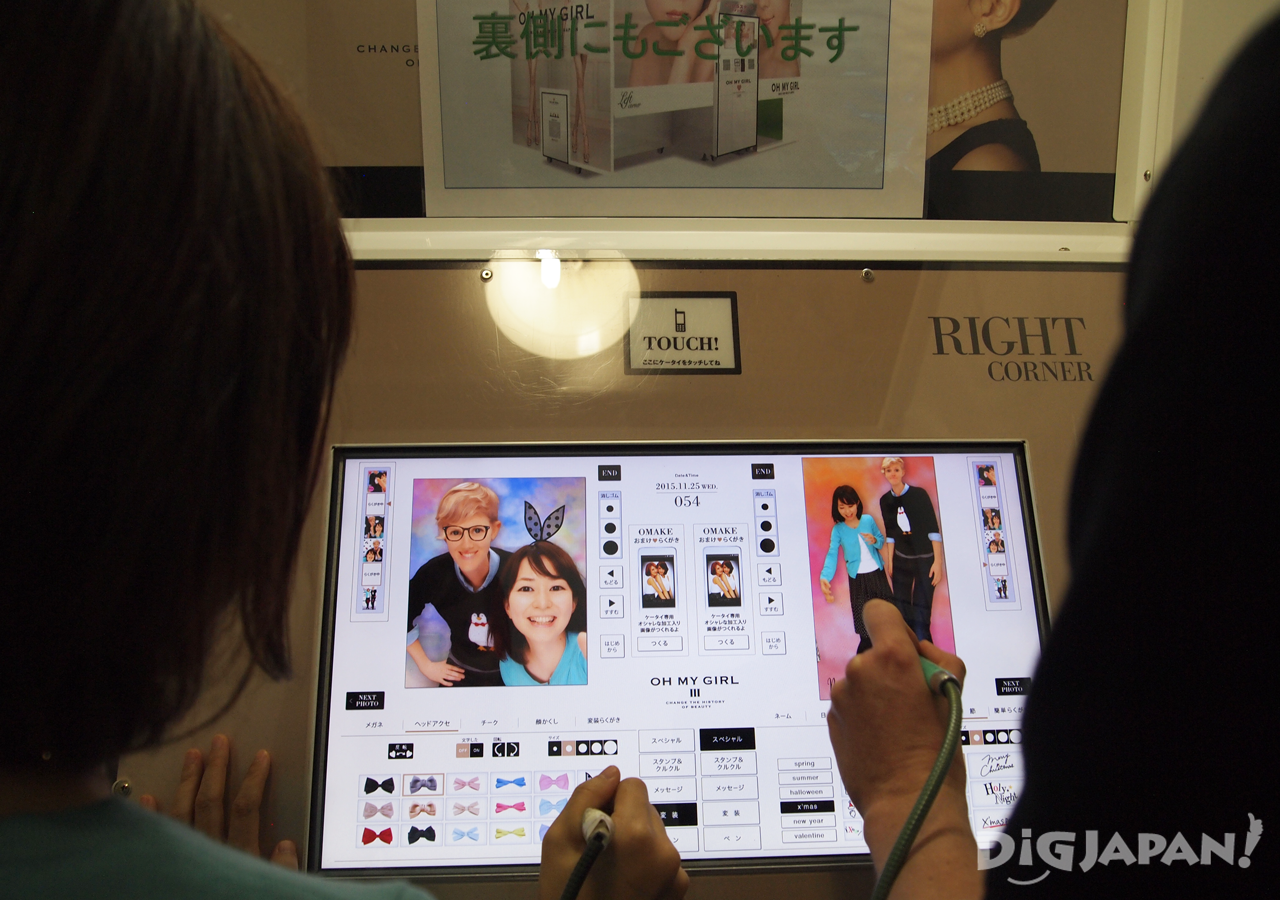 You can decorate your pictures with text and stamps.

Once you've taken your pictures, you can decorate them with text and stamps as well as choose the layout of the pictures before you print. 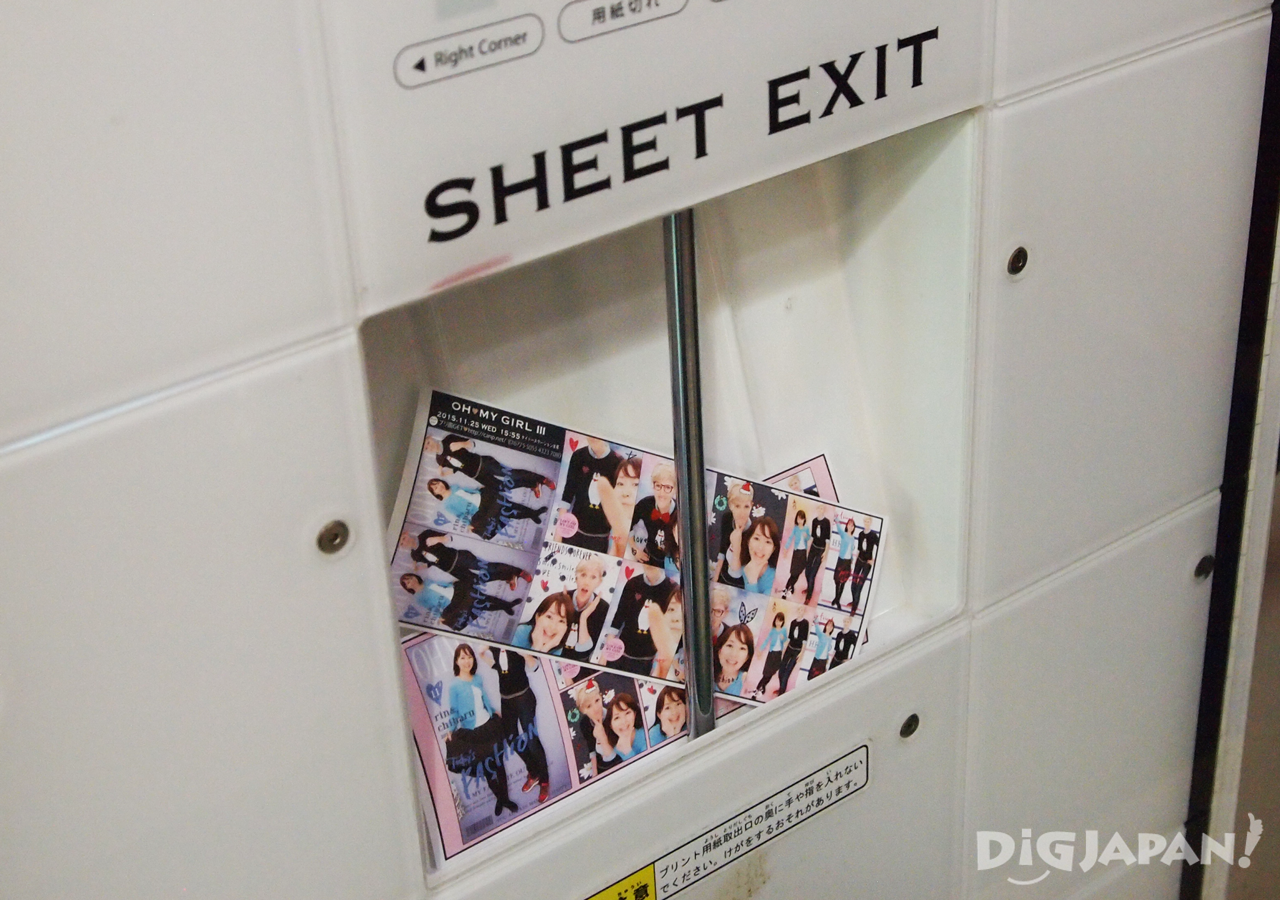 Tada! The pictures are printed from the machine.

How much time you have to decorate depends on the settings the store has installed on the machine. Your pictures will be printed out from a printer on the side of the machine. Bonus: the photos are actually stickers! 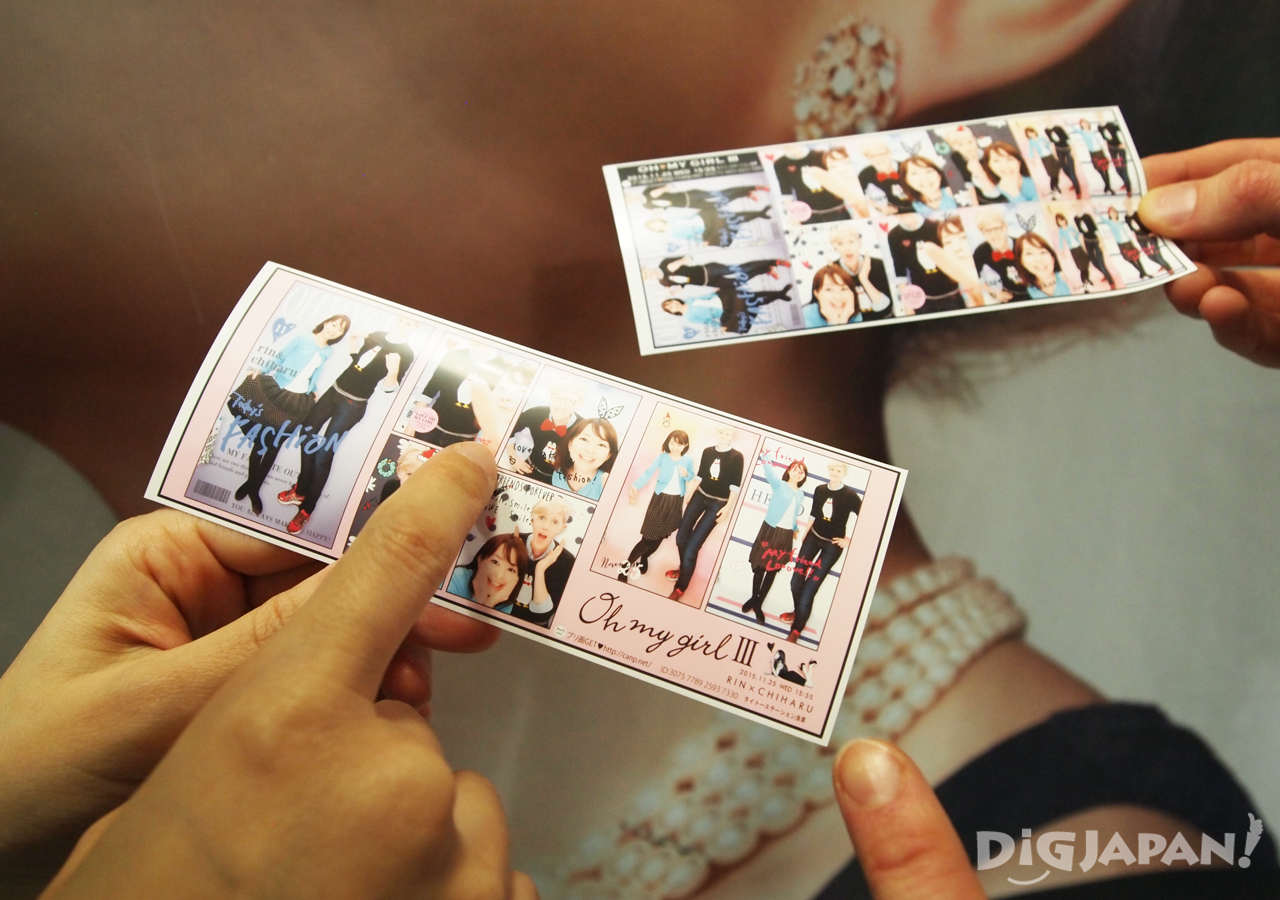 These are just a few of the options at the game center. So if you'd rather have the glory of winning souvenirs rather than buying them, want some slightly bizarre photos to commemorate your trip, or relieve stress with some table flipping, then enjoy a few hours at a game center.

Have you ever been to a game center? If so, do you have a game you'd recommend? Let us know in the comments!

Correction: a previous version of this article said that you would have unlimited time to decorate purikura pictures if no one else was taking pictures at the time. The amount of time you have depends on the settings that individual game centers install on the machines.