The first thing that comes to mind when thinking of Mika Ninagawa's artwork is color-- and lots of it. The hues she chooses are bright, intense, and almost otherworldly. What better creatures to pair with these vivid colors than some of the ocean's most fascinating: jellyfish. From now until March 14th 2017, you can see her collaboration with Sumida Aquarium during the special exhibit "Mika Ninagawa x Jellyfish" (「蜷川実花×クラゲ」). 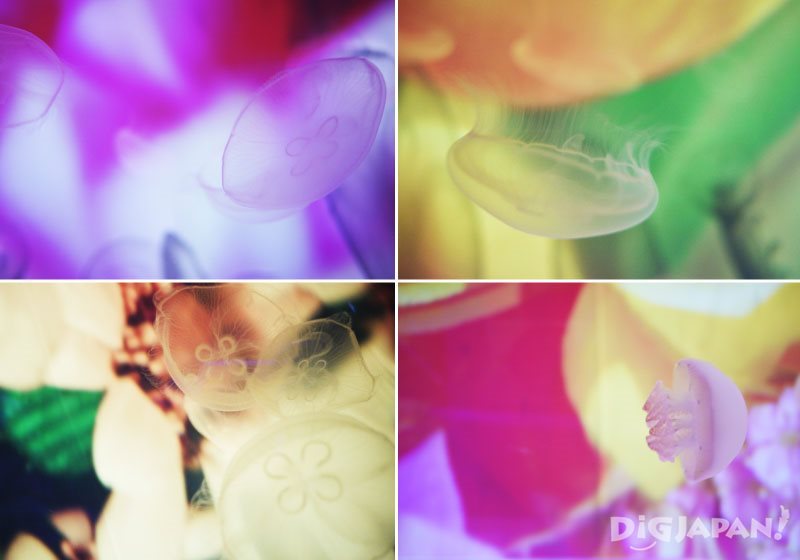 A giant tank greets you the moment you step into the aquarium. Inside, jellyfish drift peacefully in the water, a sharp contrast to the vivid, forceful backdrop of Ninagawa’s colorful artworks. 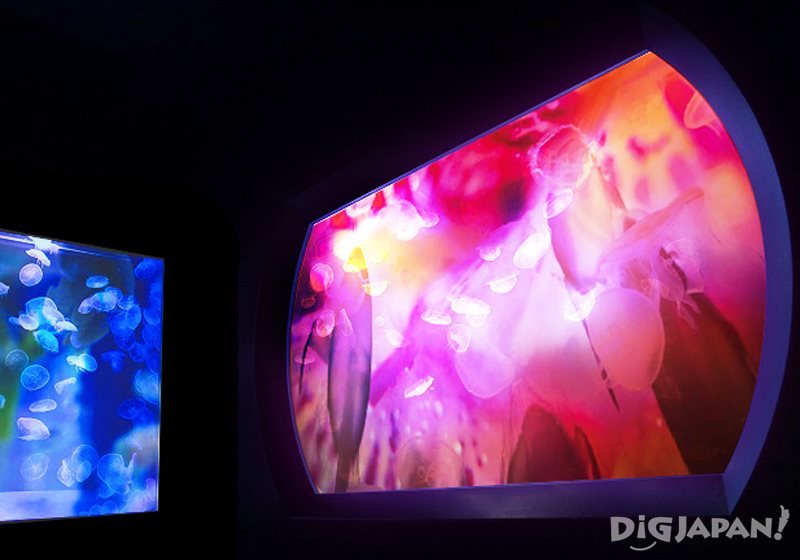 This tank of jellyfish used in the collaboration comes in at around four meters wide.

The union of flowers and jellyfish is an unusual one, but the two come together in a unique sort of harmony. Ninagawa invites everyone-- young and old, male and female-- to visit this unique world and be soothed by the creatures inside her works.

Including the huge tank at the entrance which measures around four meters wide and a meter and a half tall, all eighteen of Sumida Aquarium’s jellyfish tanks have been transformed by Ninagawa’s vivid art for this event. In addition to still pictures, some tanks have moving projections created by the artist. 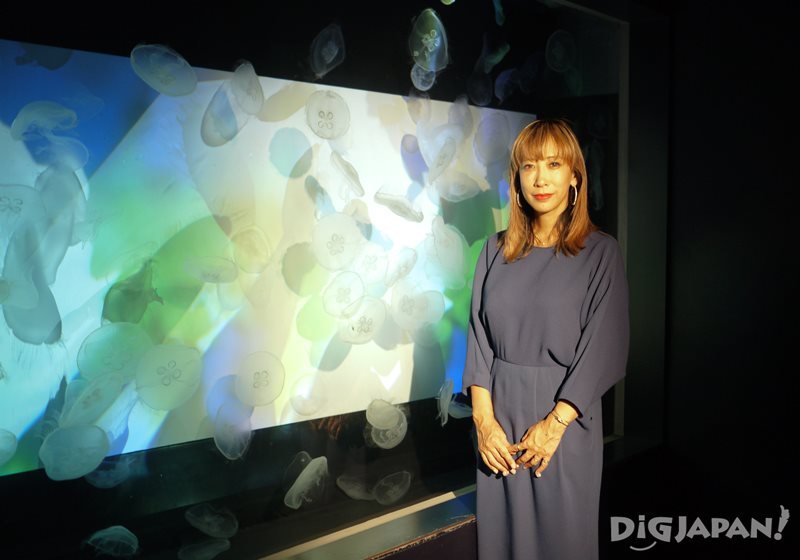 The large tanks of jellyfish have been brilliantly transformed by the colors of Ninagawa.

Located right beside the large tank are eight smaller U-shaped tanks, each containing a different species of jellyfish. Some are a stunning blue color while others are no larger than your fingernails. During the event, you can watch them swim tranquilly against a background of Ninagawa’s photographs. 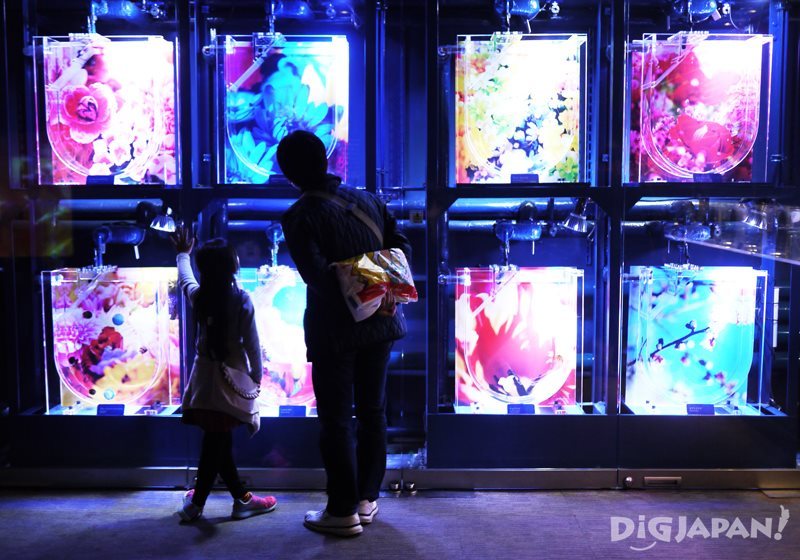 The U-shaped tanks next to the large tank. 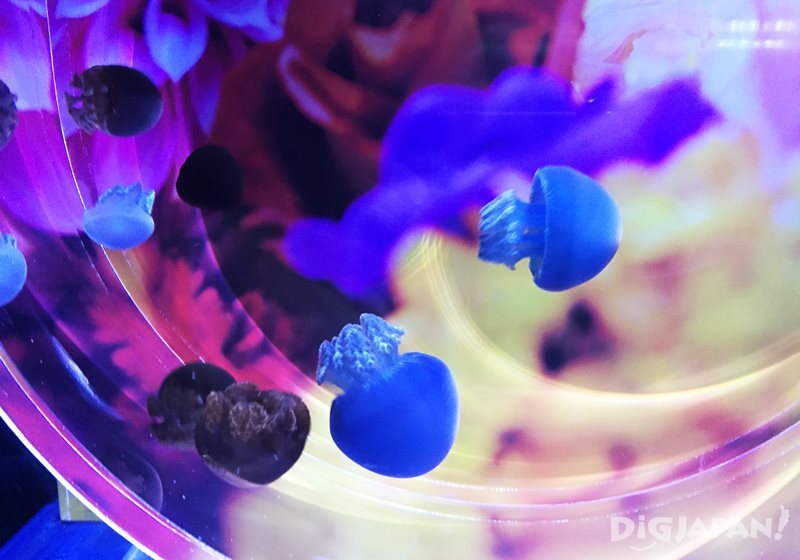 Brilliantly blue jellyfish swim peacefully in one of the smaller tanks. 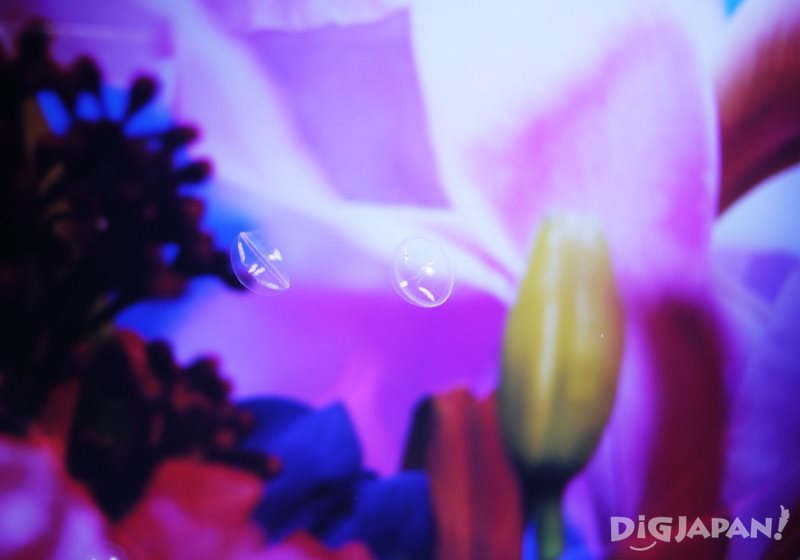 Jellyfish no larger than your fingernails seem to melt into Ninagawa's photograph. 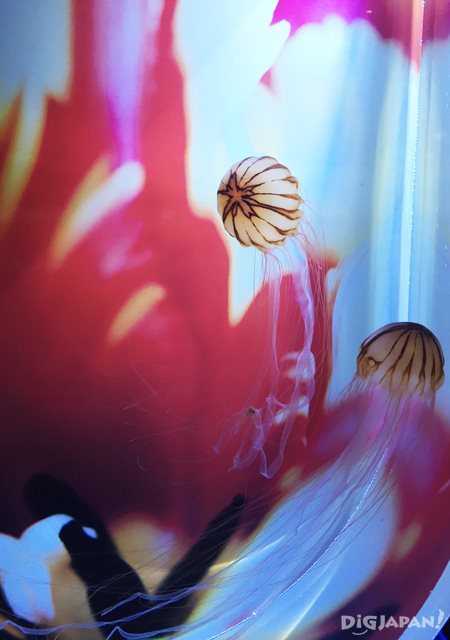 These jellyfish look as much like flowers as do the ones in the picture.

If you find yourself burning to know more about these fantastic creatures thanks to the exhibit, you're in luck. The staff of the Aqua Lab next door will teach you about jellyfish. You can also check out some of the equipment used for breeding and raising jellyfish. 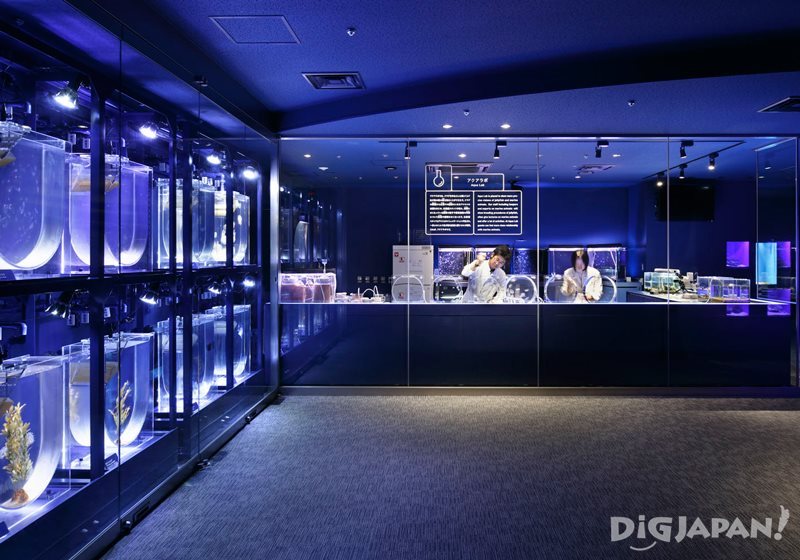 You can observe the various stages of how jellyfish develop from babies into adults before they're added to the aquarium’s tanks.


A jellyfish kaleidoscope made with nearly 5,000 mirrors

One last must-see at this exhibition is the Jellyfish Kaleidoscope Tunnel. Nearly 5,000 mirrors covering the walls and ceiling of this approximately fifty meter tunnel reflect eight jellyfish tanks as well as a projection of Ninagawa’s artwork, creating a kaleidoscope-like effect.

In this section of the exhibition, you are invited to use your other senses as well. In addition to these fantastic images, you can enjoy music as well as sweet fragrances as you linger in this extraordinary world of jellyfish and flowers. 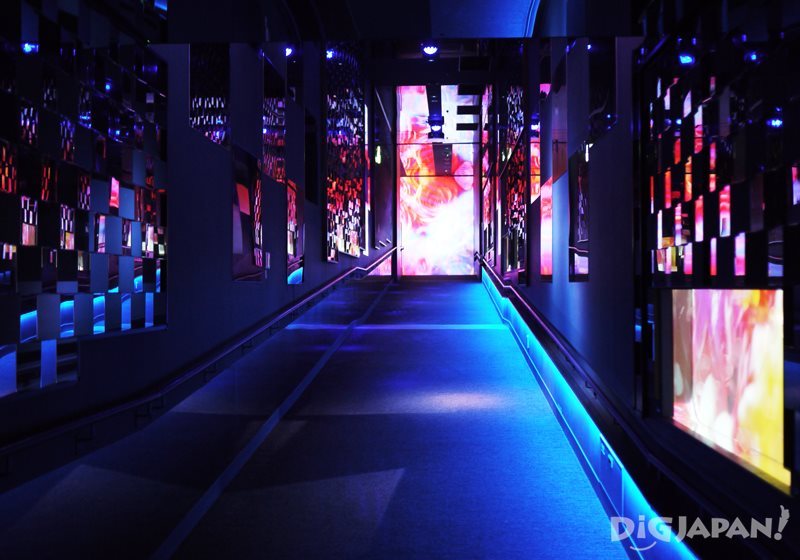 You can use your senses of sight, hearing, and smell in this part of the exhibition.

There are two different projections played in the kaleidoscope tunnel, one during the afternoon and one during the evening, and each plays for about seven minutes. And because the images are always changing, there’s plenty to see during this phenomenal exhibit. 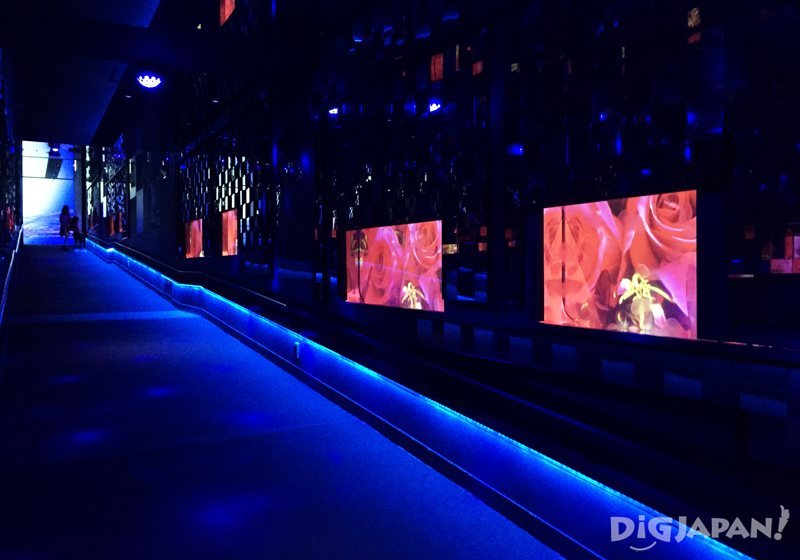 It's easy to spend hours in this soothing exhibit.

To those who want to take plenty of pictures to remember the exhibit but are afraid of it being too dark or that the movement of the jellyfish will make it impossible to get a good shot, don’t worry. There’s a spot by the exit of the kaleidoscope tunnel that’s perfect for a picture even if all you have is a smartphone camera. Pose by this brilliant picture by Ninagawa and say “cheese!” 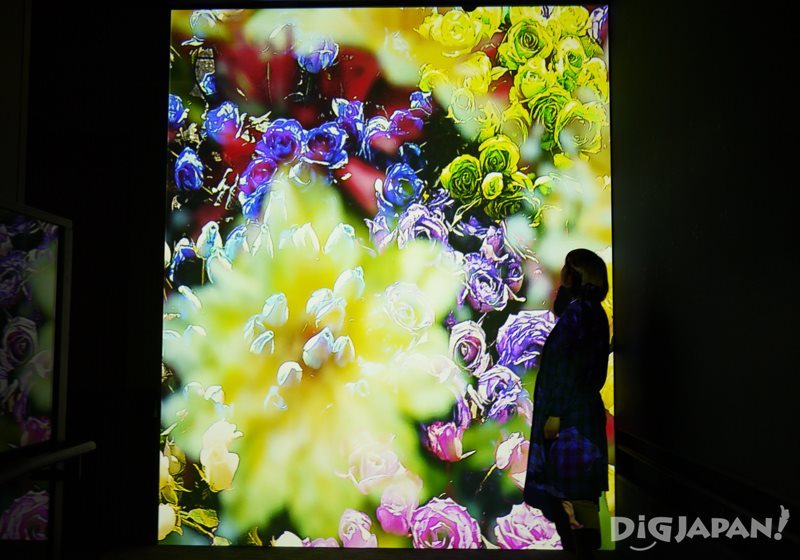 This great photo spot is located close to the exit of the kaleidoscope tunnel.

At the Penguin Cafe located on the 5th floor, you can try some limited edition jellyfish-themed treats during the event period! Here we have the fluffy Jellyfish Soda topped with cotton candy and filled with peach-flavored jelly.

There are two different colors of soda that match the different lighting displays in the kaleidoscope tunnel. The sodas sold in the afternoon are pink to match the afternoon lighting design, and the sodas sold in the evening are blue. What color you get depends on when you go! The price for one soda is 500 yen, but you can choose to add alcohol for an additional 50 yen. 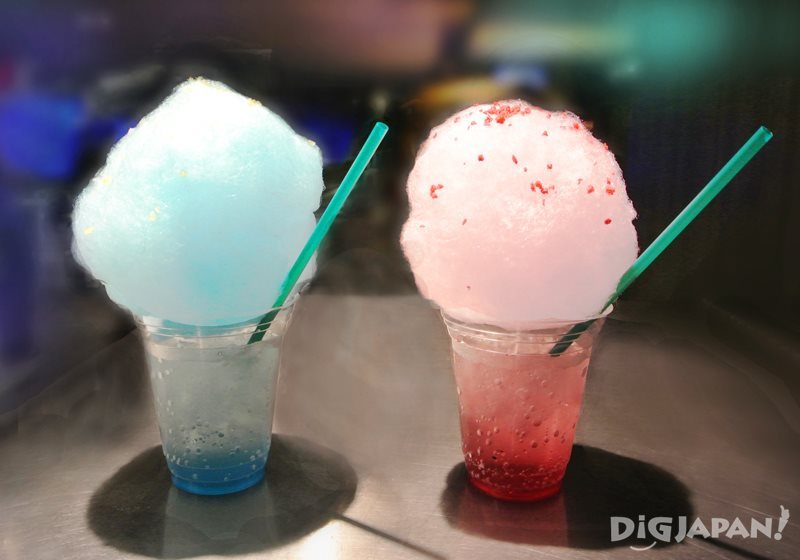 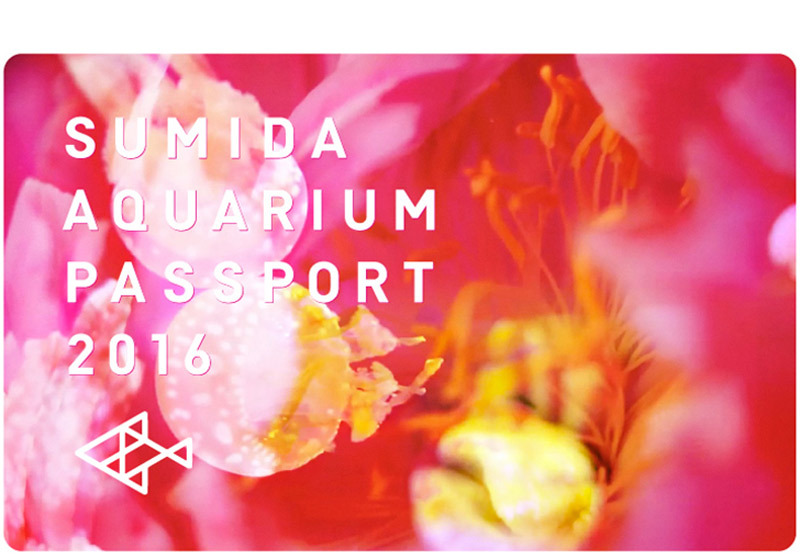 In addition to jellyfish, you can also enjoy all sorts of interesting creatures at the Sumida Aquarium like penguins and goldfish. Its location in Tokyo Skytree Town makes it a great place to stop by after visiting Tokyo Skytree; and because the aquarium is open late, it's also a great place to go after enjoying dinner out. Be sure to visit during this amazing exhibit! 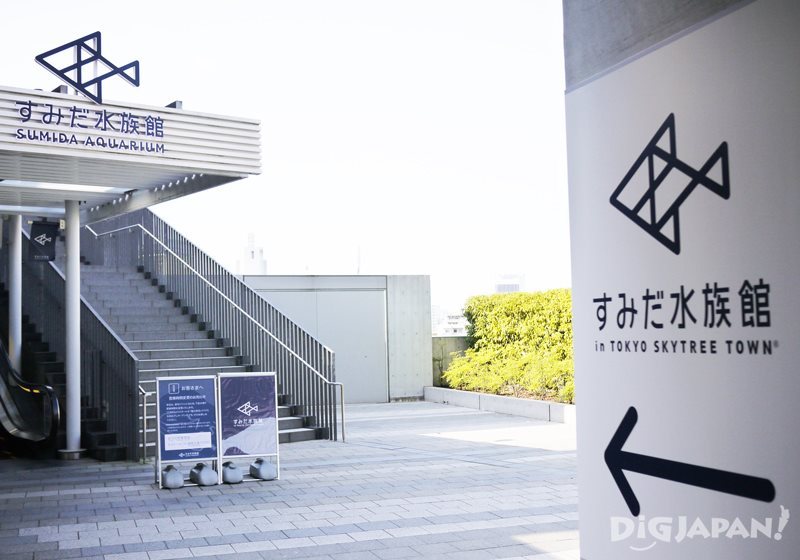 While photographs of the exhibit are lovely, it can't compare with watching the jellyfish swim around with the art.