Let's Go! A Walk-Through Guide to the Fushimi Inari Shrine

Located in the entrancing city of Kyoto, Fushimi Inari Taisha Shrine is home to the famed tunnel of a thousand torii gates. Used as the setting for the movie Memoirs of a Geisha, this shrine is often ranked as the number one most popular sightseeing destination among tourists visiting Japan.

Come along with DiGJAPAN! as we take a look into the shrine behind the torii gates.


Fushimi Inari is the main shrine dedicated to the Shinto god Inari, of which there are around thirty thousand smaller “branch” shrines located throughout Japan. Inari is said to hold influence over many things, including business, agriculture, and family safety. This is one reason why the main shrine gets extremely crowded around times like the start of the New Year, when Japanese people come from all over for hatsumode – the first temple visit of the year. 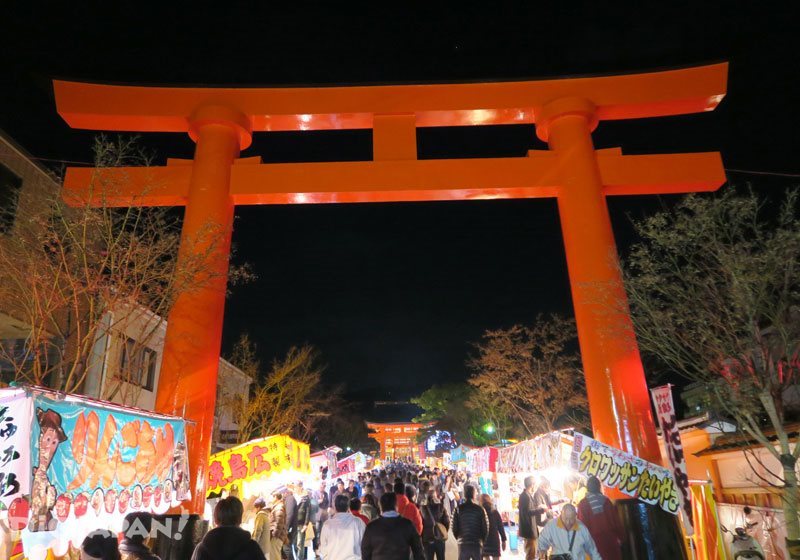 During the New Year, the road leading up to the shrine is lined with food stalls.
Fushimi Inari Shrine lies at the base of Mt. Inari, a low mountain which boasts a circumference of nearly 87 and a half meters at the base. While famous for its path of a thousand torii gates – those tall, red frames familiar to every Japan enthusiast – Fushimi Inari also boasts a plethora of other attractions such as the “Heavy/Light Stone,” along with nearly four kilometers of mountain trails.

The entire trail takes about two hours of light hiking, so visitors who want to see the entire mountain are encouraged to plan their schedules accordingly and wear walking shoes. But don't worry, there are places along the way where you can stop and have a cup of tea or a bite to eat, so feel free to take your time as you make your way along.


Walking along the main road of the shrine, you'll pass under a large torii leading to the largest tower gate (roumon) in all of Japan. 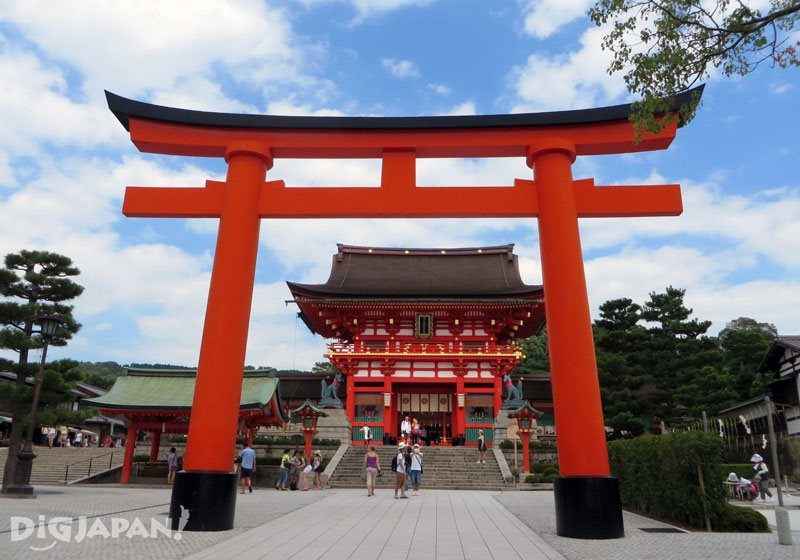 A red gate against a blue sky.

Passing under the tower gate will lead you to the main shrine. This ornately decorated building is where the prayers and monetary offerings take place. 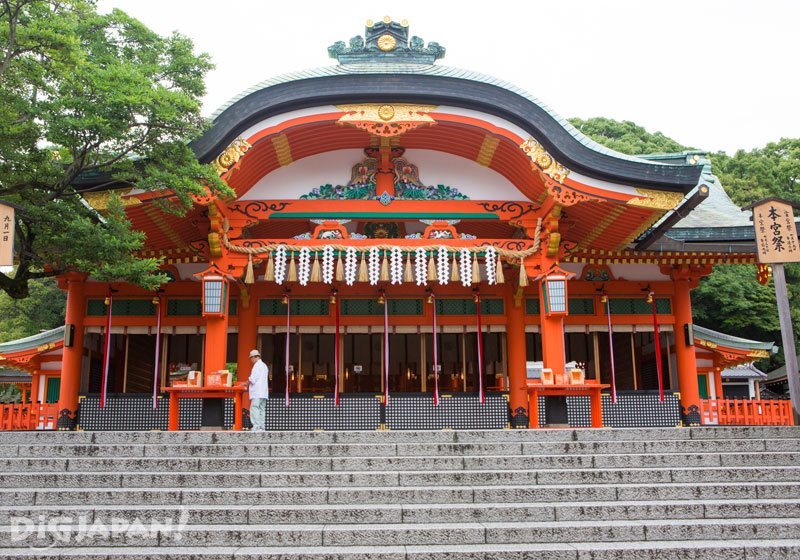 The main gate and the main shrine are both recognized as Important Cultural Properties.

Here you can find these ema shaped like the famous torii. 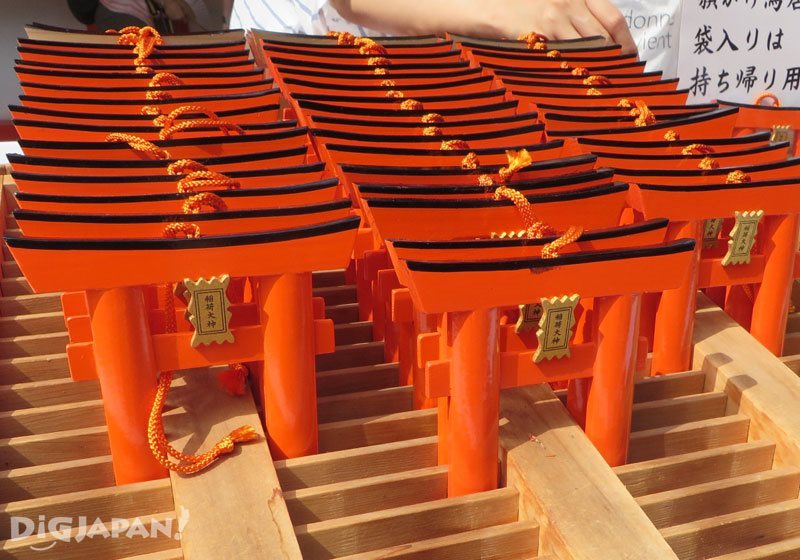 While people typically write prayers on ema, many people choose to take one of these torii-shaped ones home as a souvenir.

After you've vistied the main shrine, climb up the stone steps leading towards Mt. Inari. From there, the rows of torii begin. 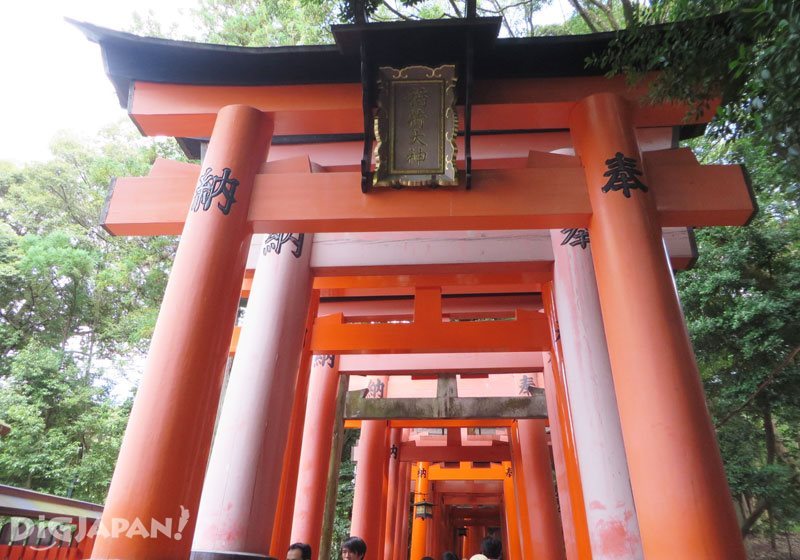 There are many large torii here.

Along the path, you'll come across the most famous location of Fushimi Inari, where the line of torii splits into two, and the beginning of the shrine's true attraction – the path of a thousand torii gates. Either path will take you back and forth to the same place, but during crowded times like the New Year, traffic walks on the right-hand side to avoid congestion. 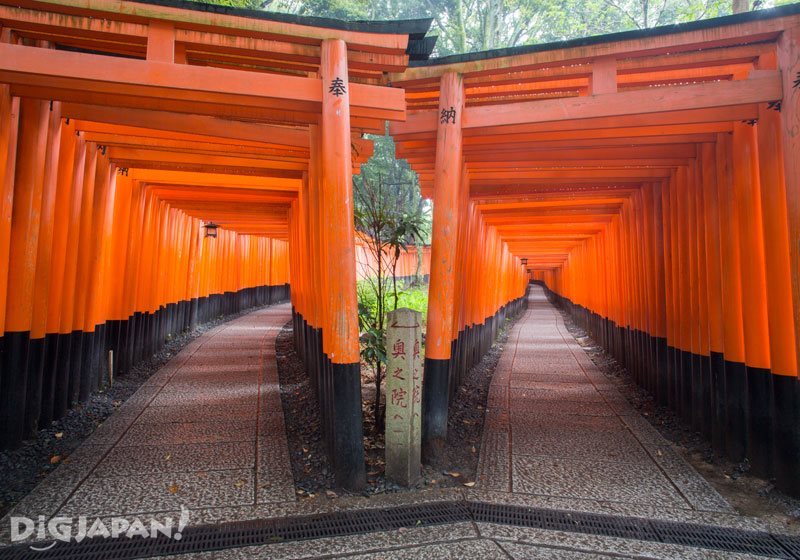 This is the most-photographed spot in the entire shrine, and visitors will often take turns in order to get the perfect shot.

All these torii gates were supposedly donated by people or companies whose wishes made at the shrine came true. Each gate has its donor's name painted on the side, and the names of many important Japanese companies can be found along the way. There are even some celebrities' names to be found. 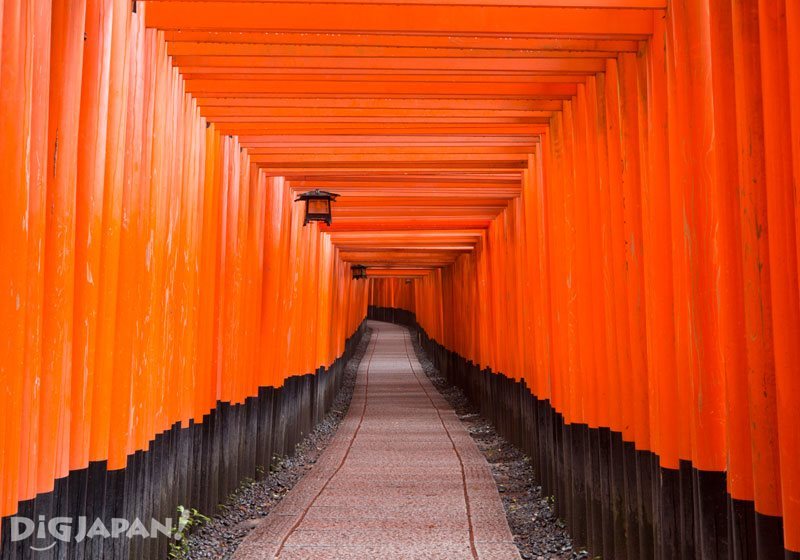 The tunnel of torii is a very powerful sight.

At the end of the thousand torii gates lies the inner shrine, where ema are sold. Ema are wooden plaques upon which one can write a prayer or wish, which are then hung up on the shrine wall as an offering. Fushimi Inari is famous for its fox-shaped ema, on which visitors often draw faces in addition to their wish! 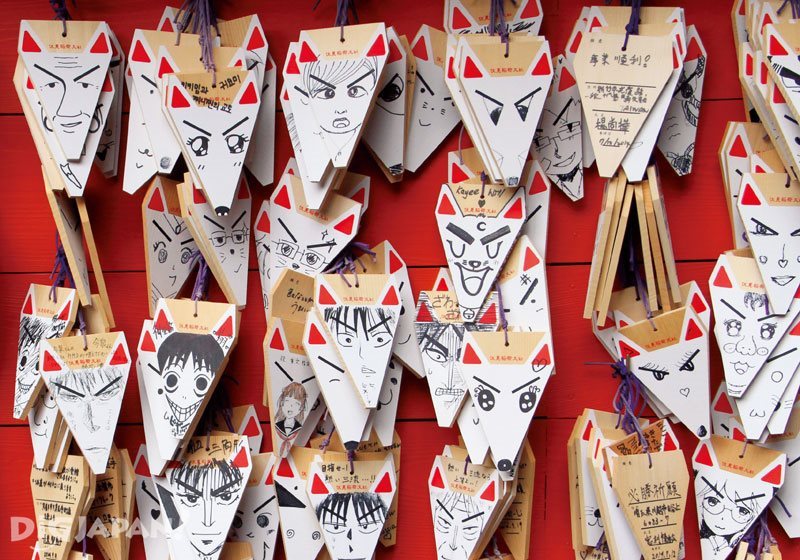 Looking at all the different faces on the ema is fun in itself.

Near the inner shrine is a place called Omokaru Ishi (lit. heavy/light stone). Just make a wish and pick up the stone – it's said that if it's lighter than you thought it would be, you wish will be granted. 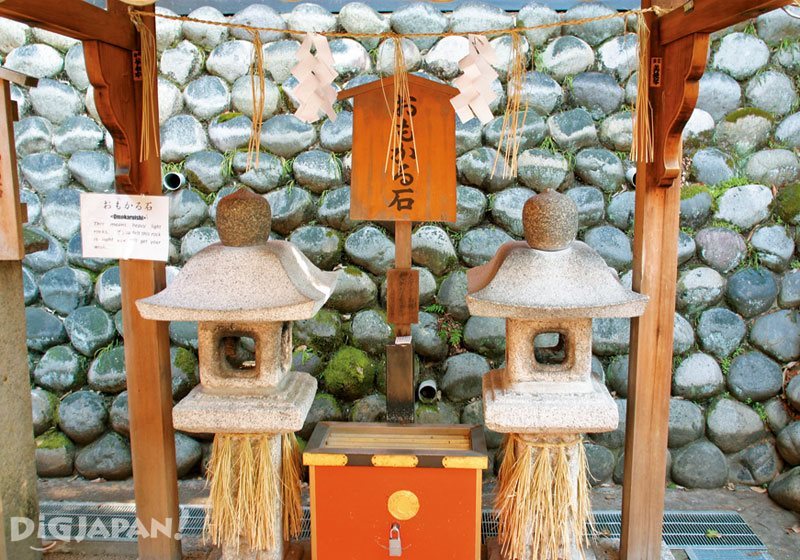 Test your luck and see if your wish will come true!

This is where the adventure ends for many people, but you’ll need to follow the path around the mountain to get the full Fushimi Inari experience.


A Mysterious World Surrounded By Nature


The road to the mountain summit starts  at the inner shrine seen here. 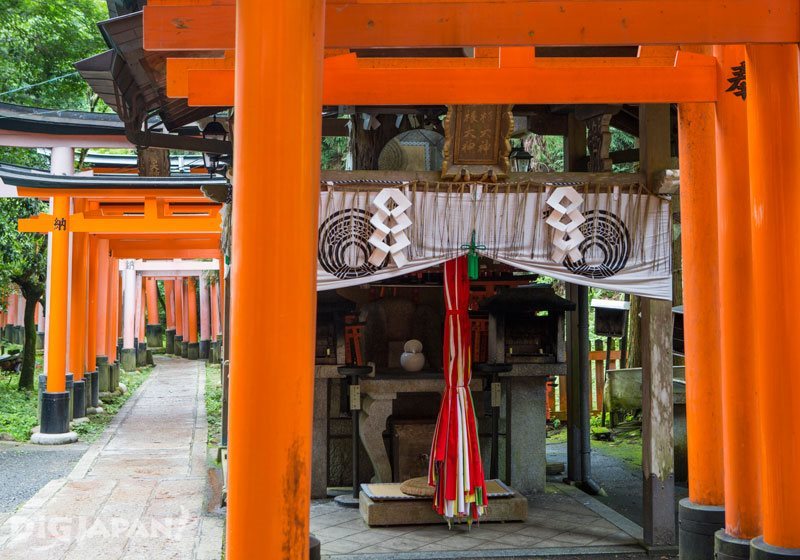 The torii gate tunnels continue on up the mountain.

This place is known as the massha, meaning a shrine that is affiliated with the main shrine. The atmosphere here is far more relaxed and peaceful than the pathway of the thousand torii gates. 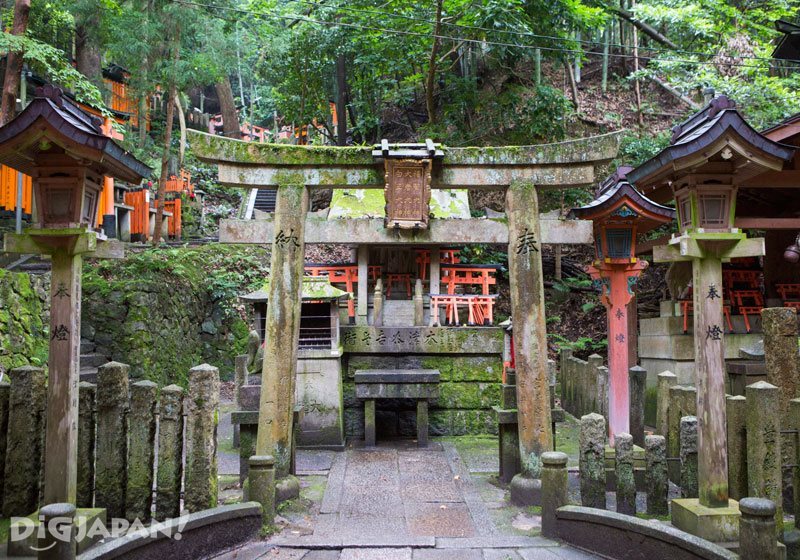 This area has a mysterious air to it.

Scattered around the mountain are several other “sub-shrines,” the first of which is known as Kumataka-sha, the Shrine of the Mountain Hawk-Eagle. An interesting legend surrounds this shrine and the lake behind it, saying that if you face the lake and clap your hands, you should look carefully in the direction that the sound echoes back to you from, as it will lead you to someone who has lost their way. 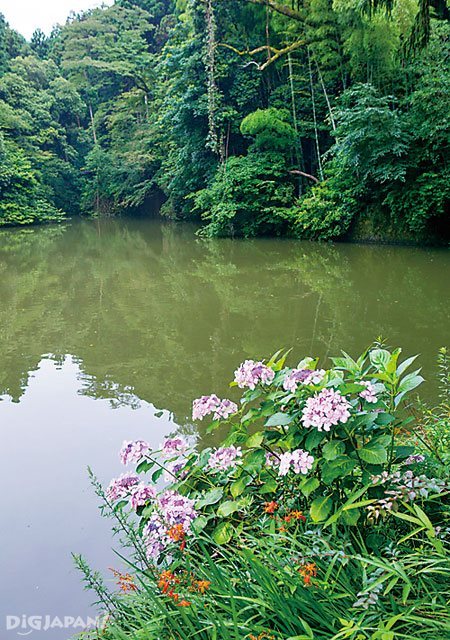 There are a few tea shops along the mountain path, so feel free to take breaks as you wish.

Make it up a steep part of the path and you'll reach a place known as yotsu tsuji or the crossroads. This is another popular place for photos and offers a breathtaking view in the evening. It's only a short trip to the summit from here. 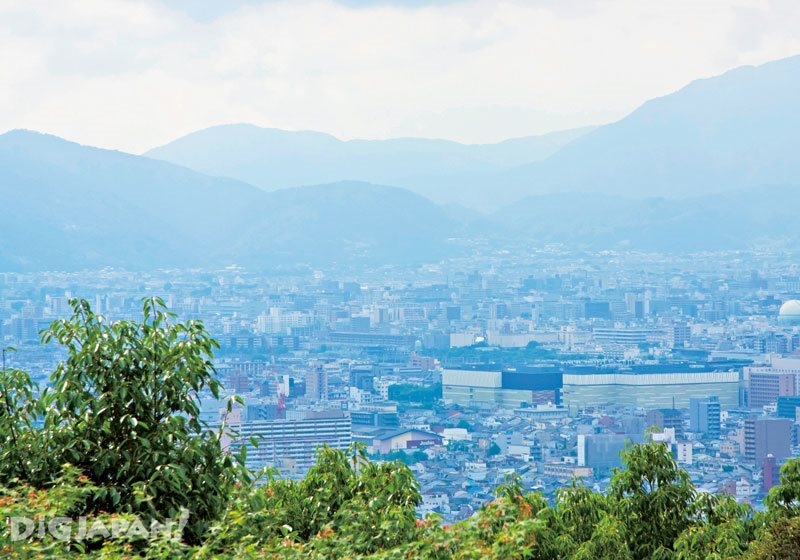 From here you can get a view of all of Kyoto City.

At the very top of the mountain are multiple sub-shrines for insight, health, and wellbeing. And with that, you've reached the 233 meter summit of Mt. Inari! Congrats! 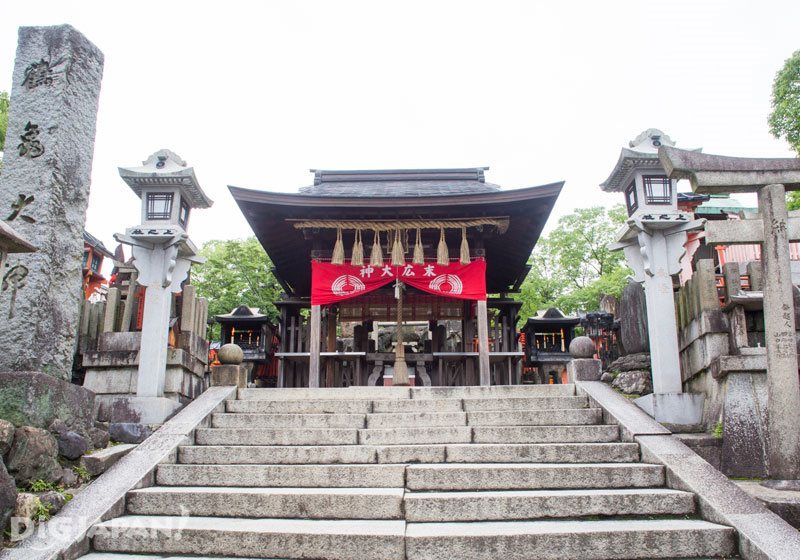 This particular sub-shrine is supposed to bring luck in business.

When you've had your fill of the mountain peak, it's time to head back down the mountain to the inner shrine. At this point you've likely noted the stone fox statues standing guard at various points within the shrine, each holding something in its mouth. Take another look on your way down the mountain and see if you can figure out what each is carrying – a rice plant to signify a plentiful harvest, a key to unlock a storage shed brimming with grain, a scroll for attaining wisdom, or a precious orb symbolizing spiritual power. 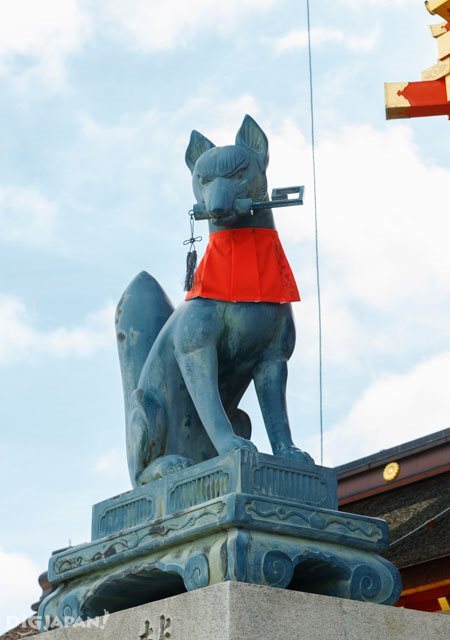 Here’s a fox with a key in its mouth. 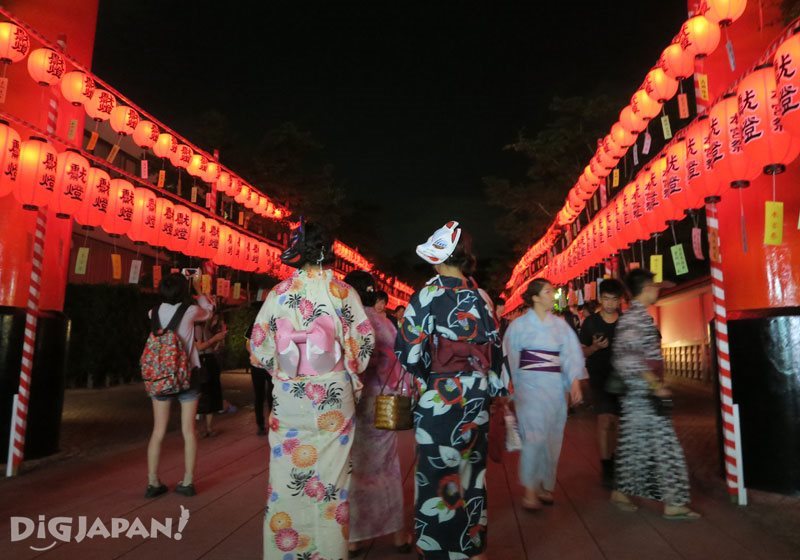 The shrine lit up in bright red. 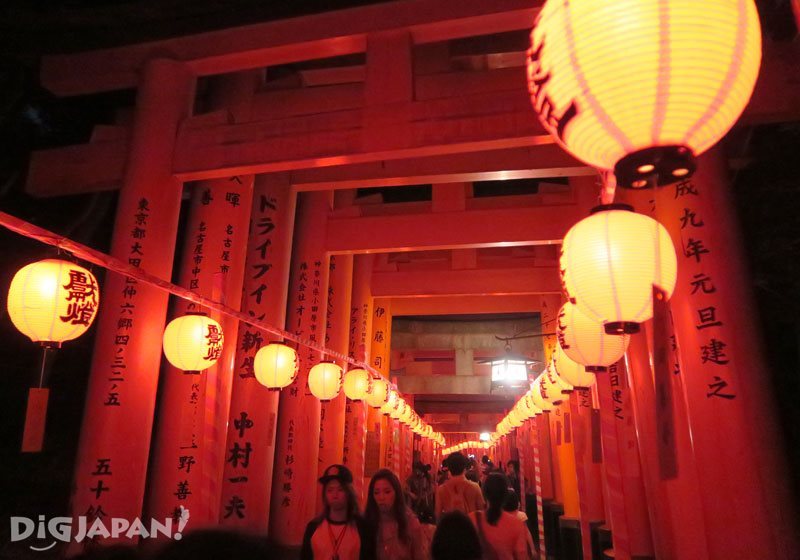 Paper lanterns are also hung up inside the paths of torii gates.


Discover the Charms of Japan at Fushimi Inari Shrine


Fushimi Inari Shrine is a must-see spot for both foreign and Japanese tourists alike and is sure to either instill or renew a sense of wonder at the beauty of traditional Japanese culture. To anyone visiting Kyoto, make sure to add this shrine to your list of places to see!