Animated film Your Name (Kimi No Na Wa) has become a global sensation. Now fans of the film can relive some of its most memorable scenes with the fantastic food and goods on sale now at a Your Name-themed cafe in Ikebukuro!


Your Name Cafe inside Ikebukuro Parco

The cafe is located on the seventh floor of PARCO, a large shopping mall located just a minute walk from the East Exit of JR Ikebukuro Station. 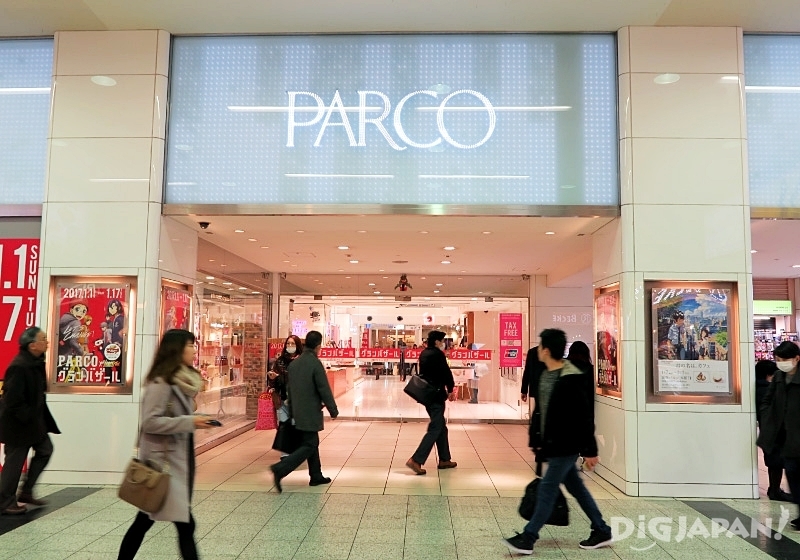 The cafe is being produced in collaboration with the film by THE GUEST cafe&diner. 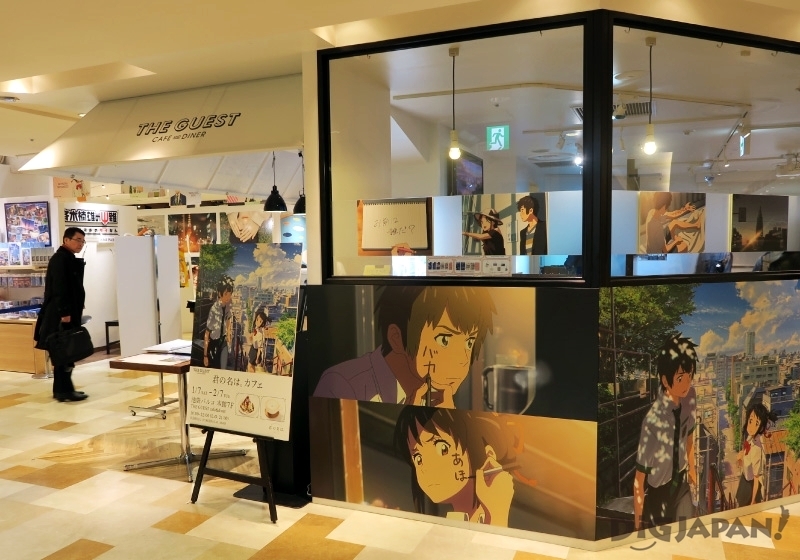 A menu inspired by scenes from the film

The food, drink, and dessert options on the menu are inspired by scenes from the film. Can you tell which scenes these foods are modeled on? 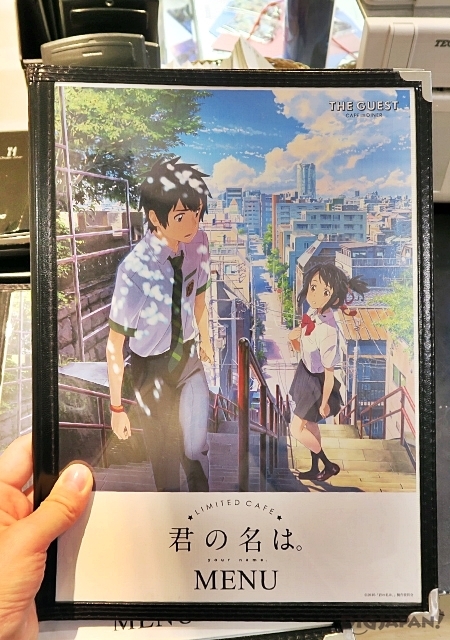 Here's a tasty choice that's modeled after the lake in Itomori, the hometown of the film's female protagonist Mitsuha Miyamizu. Adding the stew to the bread bowl creates the "lake," and the vegetables surrounding it represent the trees of her rural town. Not only is this an artistic choice for lunch, it's also quite filling. 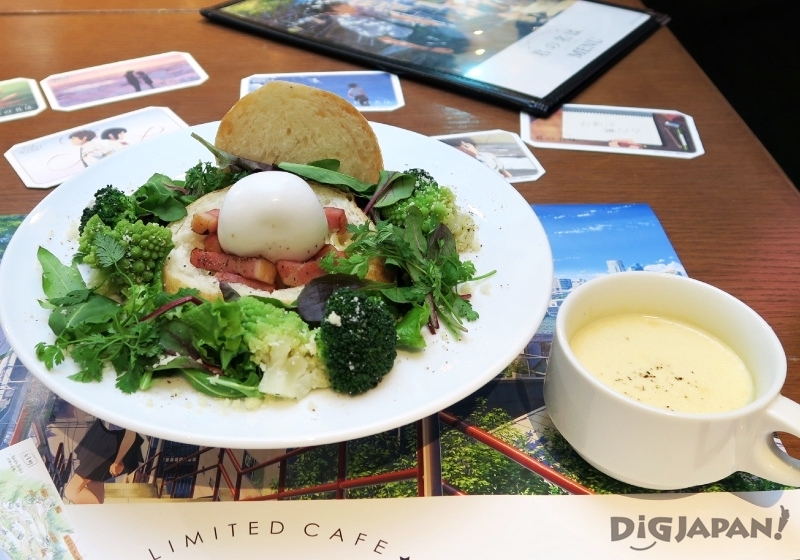 In the film, we get to see the differences between the breakfasts eaten at Taki Tachibana's home in Tokyo and those eaten at Mitsuha's. Much like Taki and Mitsuha are surprised to find they've changed places with each other, you'll be surprised, too, by which meal you get if you order this option-- they're chosen at random! 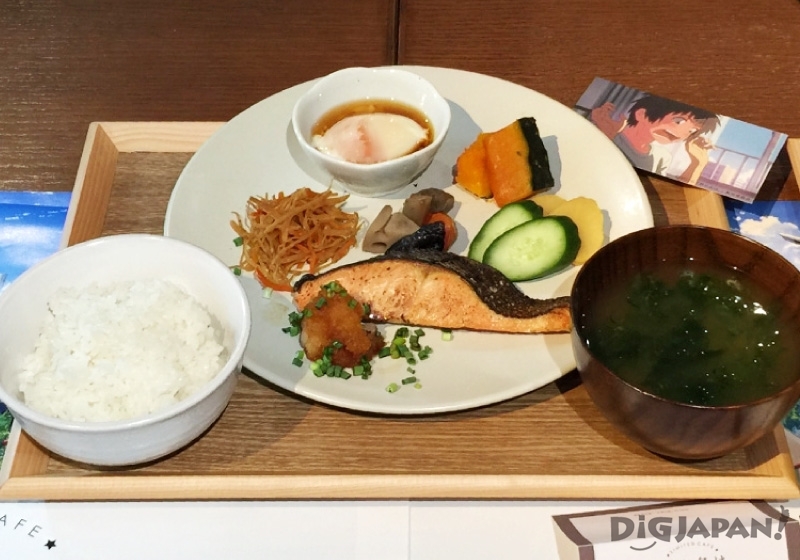 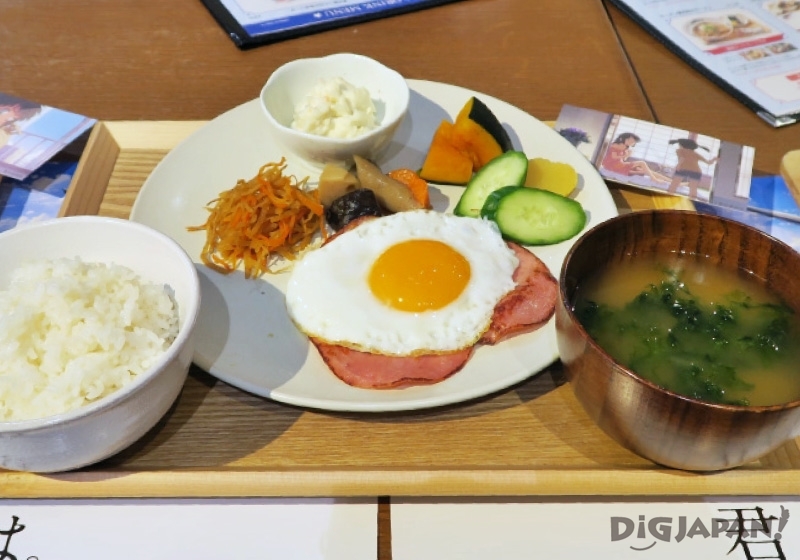 "Have You Switched Places, Too?!" Breakfasts at the Tachibana's and Miyamizu's with storyboard image card. 1,280 yen.

Mitsuha's excitement at finally getting pancakes at a trendy cafe after having switched places with Taki made for a memorable scene. Not only has the restaurant recreated those delicious-looking pancakes from the film, they've even added Taki's smartphone showing Taki/Mitsuha's thumb pressing the button to take a picture! 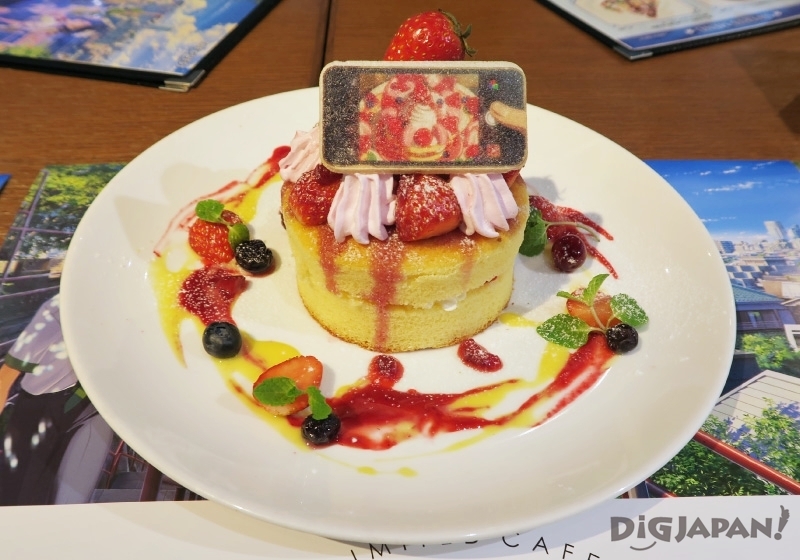 "Mitsuha, Who Has Switched Places with Taki, Wants to Take a Picture" Pancakes. 1,480 yen.

If you order this dessert, you're definitely going to want to take a picture before digging in. This matcha parfait depicts in surprisingly fine detail the Miyamizu family shrine. Decorating the center of the parfait are the giant tree and boulder, the two sacred objects of the shrine. 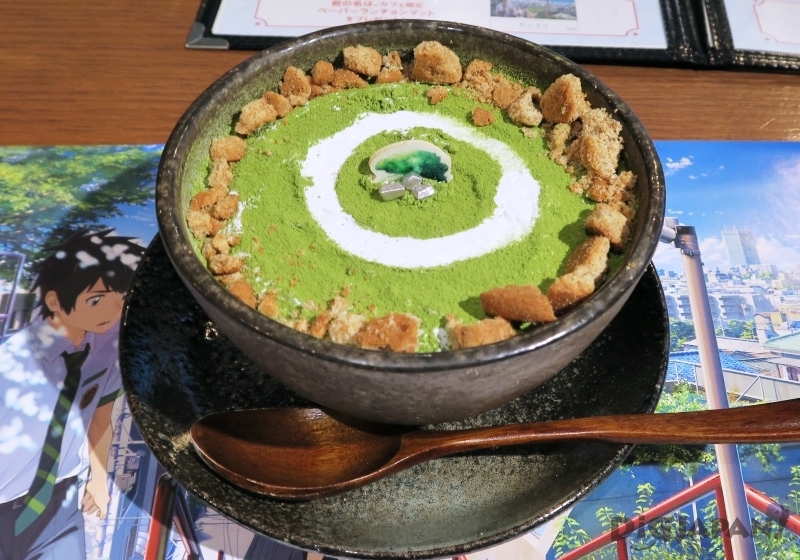 "The Summit Where the Sacred Objects are Enshrined" Matcha Parfait. 1,080 yen.

Here's another beautiful dessert. This one depicts the night sky that both Taki and Mitsuha saw on the day the comet came. The mousse represents the main part of the comet while the ice cream is the fragment that broke off. To create the effect of clouds, the restaurant uses dry ice! 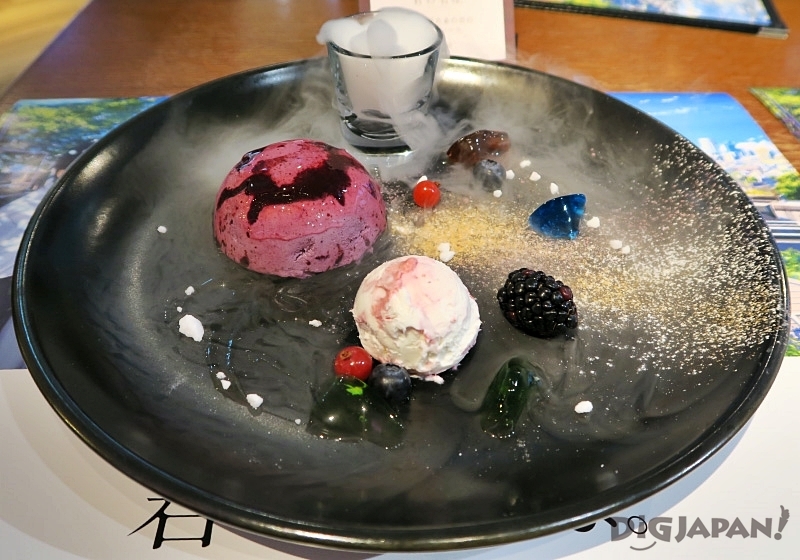 This image is particularly well-known as it was also used in the trailer for the film. This latte shows the sentence Who are you? (Omae wa dare da?) that Taki writes in his notebook. 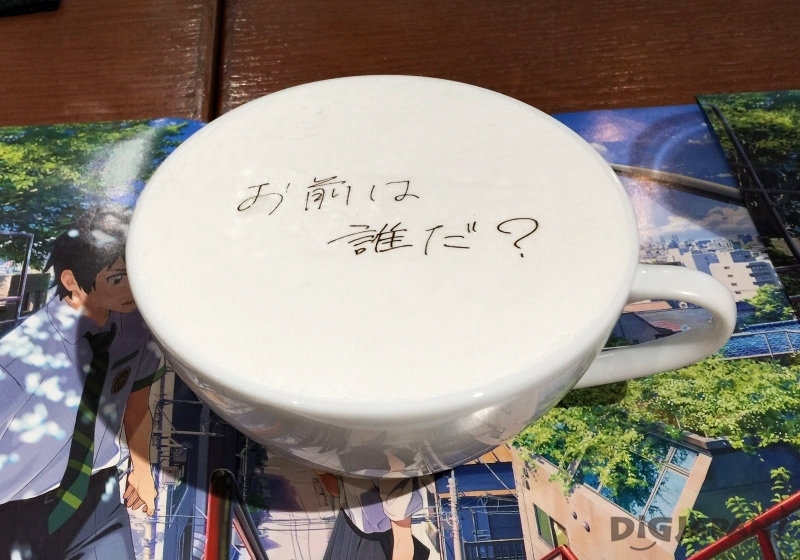 Then we have some drinks that call to mind the twilight sky against which Taki and Mitsuha were finally able to meet. One color represents Taki and the other Mitsuha. You can choose which you'd like. 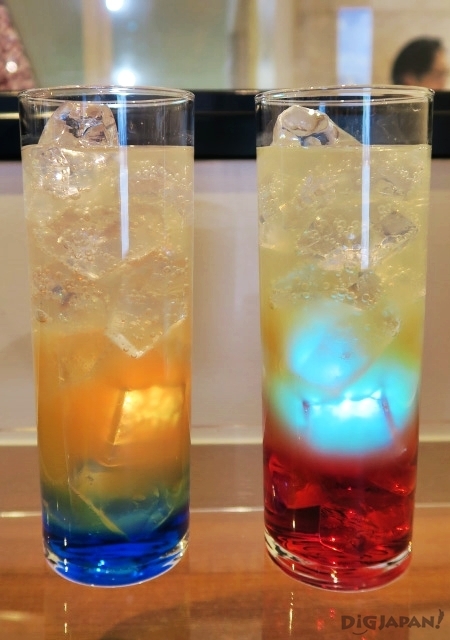 You can even get some little souvenirs from the cafe. You can take the placemat from your seat home with you. These are only available at this cafe. 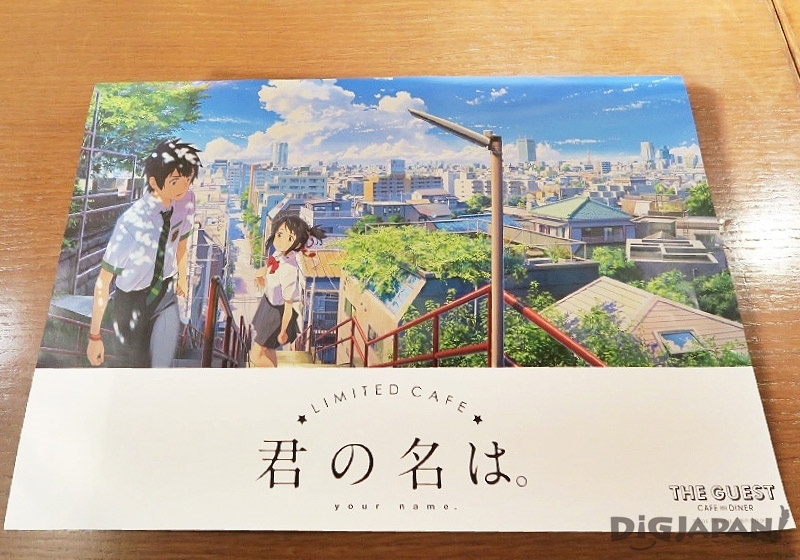 In addition, those who order something from the drink menu can take an original coaster home with them; and those who order from the food menu receive a card depicting either a scene from the movie or a storyboard illustration. 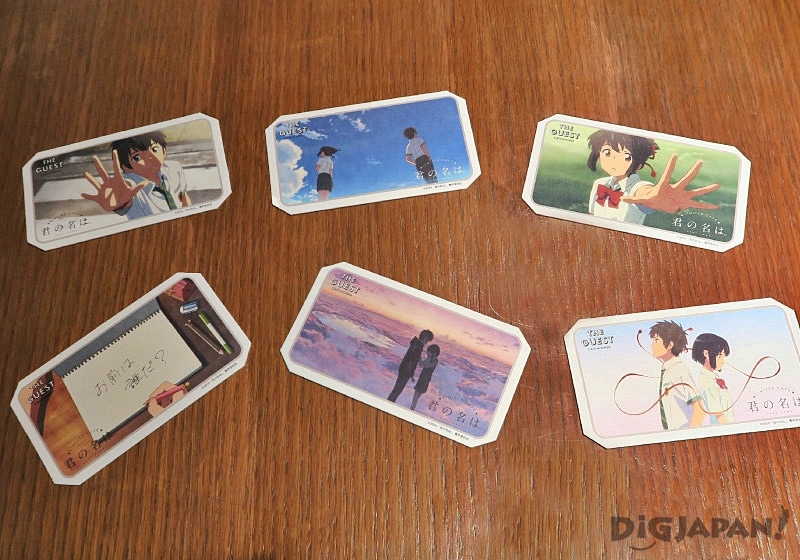 Limited-edition coasters featuring six different images available to diners who order something off the drink menu (one drink comes with one coaster).


Your Name merchandise is also on sale!

You can also find lots of great Your Name merchandise up by the side of the cash register. These items make great souvenirs-- or presents for yourself! 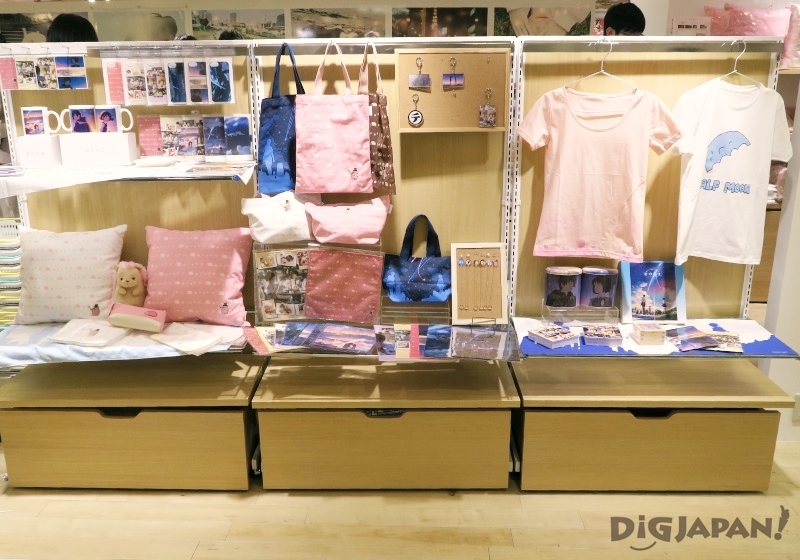 Some of these items are actually hard to find elsewhere even in Japan. One example is these Your Name-themed iPhone cases, which are said to be particularly rare. 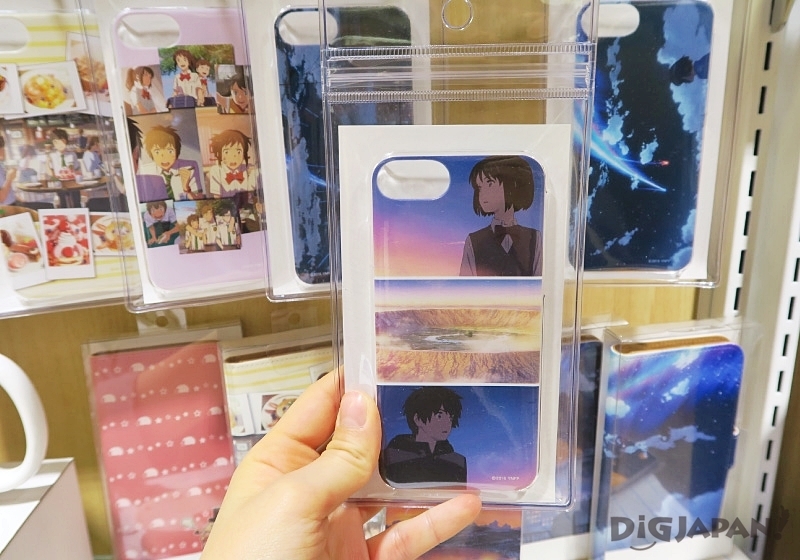 There are also some gumball machines filled with Your Name metal and acrylic key holders. 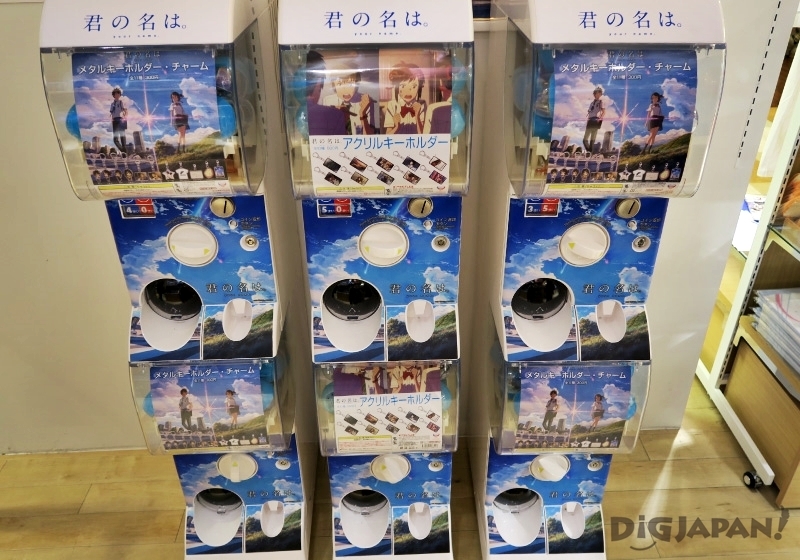 
Step inside one of the movie's most iconic scenes

One of my favorite parts of Your Name was that it realistically portrayed actual locations in Tokyo. An example of this is the stairs leading to Suka Shrine, which appear in the last scene of the film. While you can visit this location in real life, they've also recreated it so you can experience it in the film's vivid colors. 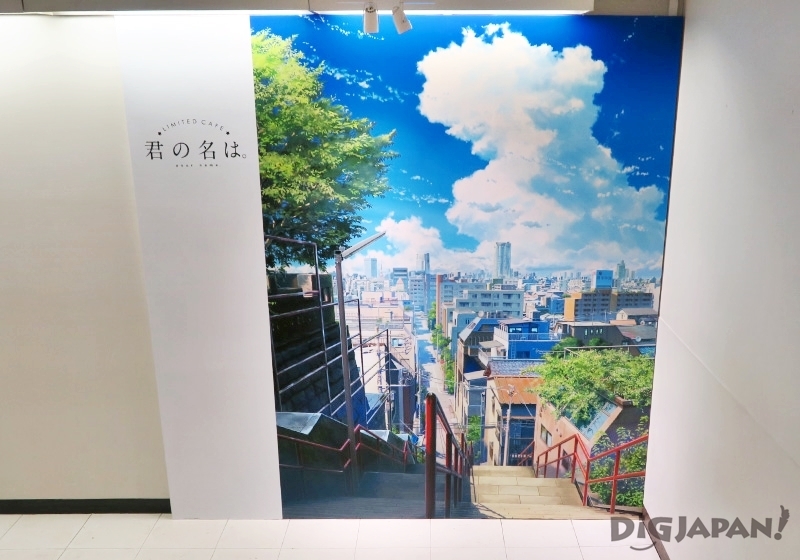 The Your Name cafe is only open until February 7. Be sure to drop by if you have plans to travel to Tokyo before then!

*All prices are prior to tax.
*Items on the menu as well as souvenirs are subject to availability and may change without notice.
*There is a second Your Name cafe open on the 8th floor Cats Garden of Nagoya PARCO West Annex from Jan. 27 to April 3, 2017.

Information about the Nagoya Your Name cafe (Japanese only):
http://the-guest.com/kiminona_nagoya/