A curtain of dried persimmons: the portrait of Japan’s autumn and winter seasons.

The region of Hata, located in the town of Higashi Izumo, Matsue, Shimane Prefecture, has produced many dried persimmons for a long time. It is located in a mountainous area facing the Japan Sea at an elevation about 150–200 m above sea level. The dry wind that blows along the outline of the mountains makes the area fit for drying persimmons.

Just after the persimmons have been harvested and curtains of dried persimmons began to emerge, we made a visit to Hata.

Quality persimmons, produced in the cool climate and with good soil preparation

Persimmons are grown all across Japan, but they come in different sizes, shapes and textures, depending on the climate and soil composition. 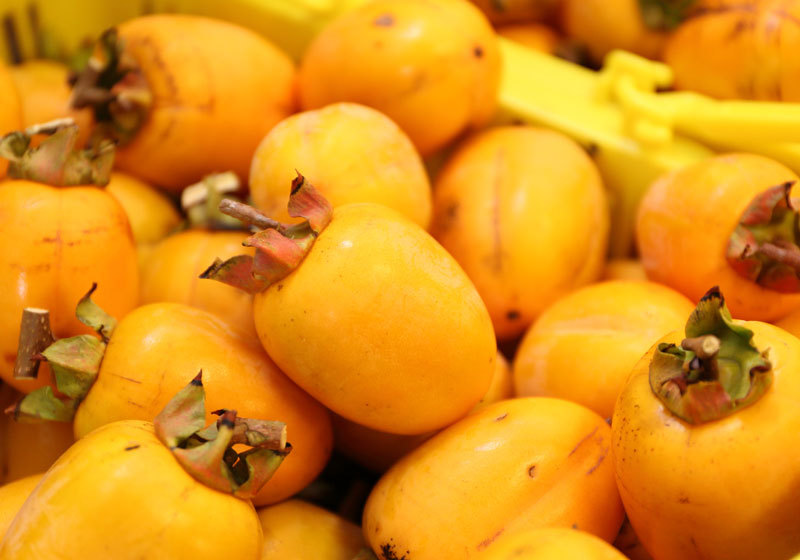 Hata produces Saijo persimmons, the major variety in the Chugoku area of western Japan. These persimmons have long grooves and are skinny. They taste bitter, so they are usually dried in the Hata region.

The history of dried Saijo persimmons goes back a long time to the age of civil wars known as the Sengoku period (1467 to 1603).

It is said that the process of drying Saijo persimmons started in the Sengoku period, when the Mori clan (who ruled the region that is now Hiroshima) took Saijo persimmon saplings with them on their campaign to conquer the Izumo region so they could rule the Chugoku area. The dried persimmons would become portable rations on the battlefield. In fact, there are trees in Hata that are 400 years old or older, alluding to their long history. 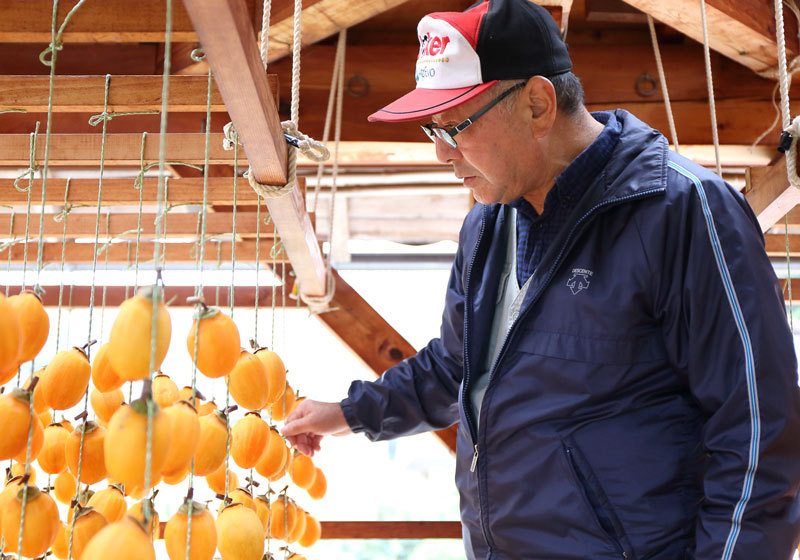 We asked Shuji Ishibashi, the head of Hatahoshigaki Producers’ Union, about the process of making dried persimmons in the region.

“Bitter persimmons are said to grow well in cool climates. And, the soil in this area is clayey, making it good for growing quality persimmons.”

There are about 4,000 Saijo persimmon trees in the Hata region. They are pruned during the winter. In the spring, people use compost to prepare the soil.

“We are actively working on production methods that use as little insecticide and chemical fertilizer as possible. All of our producers have been certified by Shimane Prefecture as eco-farmers, which means that they engage in environmentally friendly, sustainable farming,” says Ishibashi.

The good climate and environment, coupled with their efforts to mobilize nature’s ability to prepare good soil, are probably the secrets behind the tasty Saijo persimmons.

Natural drying techniques that have been passed on for generations

The persimmons are dried immediately after harvest. In the Hata region, all 19 persimmon orchards have their own “persimmon huts” where processing and drying takes place. 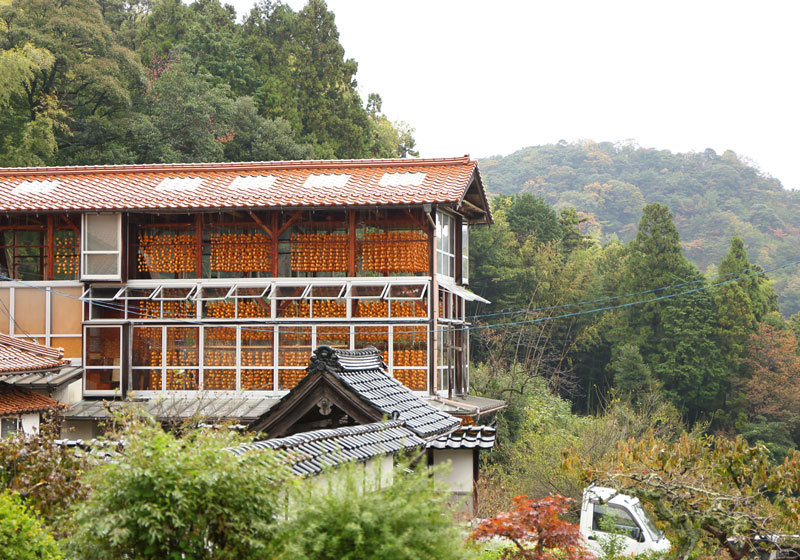 “The huts are wooden structures with two to three floors. The ground floor is a workspace, and the drying takes place on the second and third floors. These special huts can probably only be seen in this region,” says Ishibashi.

Persimmon huts have been used in Hata for about 200 years to produce naturally dried persimmons. Even today, the persimmons are created using the traditional method that has been preserved throughout the ages, avoiding the use of smoking the fruits with sulfur dioxide.

The drying process starts by preparing the persimmons for hanging with pieces of string. Using a special machine, the sepal is removed, each persimmon is then carefully peeled, they are separated by weight and are finally attached to a piece of string. Part of this process involves machines, but most of the work is done by hand. Every year, people in the region get together in the autumn to do this work in groups, but about 20 to 30 thousand persimmons have to be processed per hut. It is a lot of work. 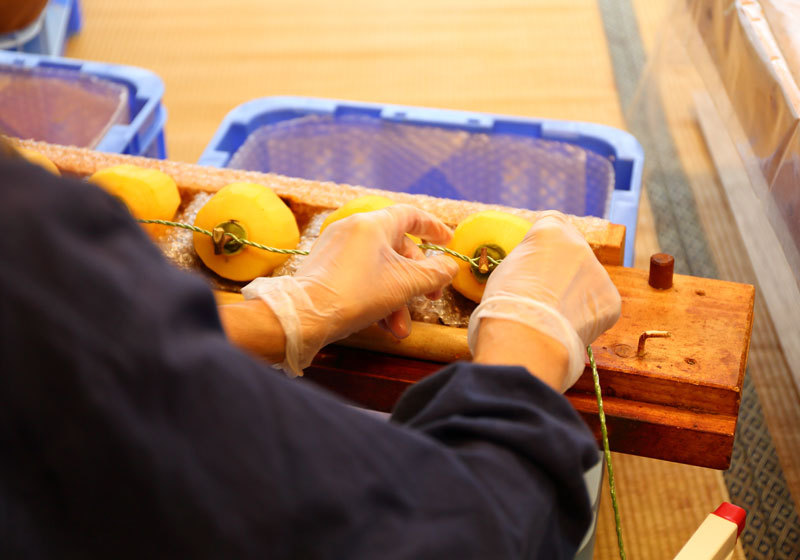 However, the most important process is yet to come. “The most important part is the drying process. We stick to natural drying. It takes years of experience and knowledge, so only a few people can do it. We adjust the conditions depending on the climate. For example, on sunny days we keep the windows open, and on rainy days we close them, for good air circulation indoors. The biggest enemy is humidity, but if we expose the persimmons to too much wind they become too hard, so we also adjust the drying conditions very finely, for example by switching the rack or floor on which they’re hung.”

These adjustments are very important from the autumn to winter when the dried persimmons are produced, because temperatures greatly differ between the morning and evening. During this time, the fruits are moved around day and night. 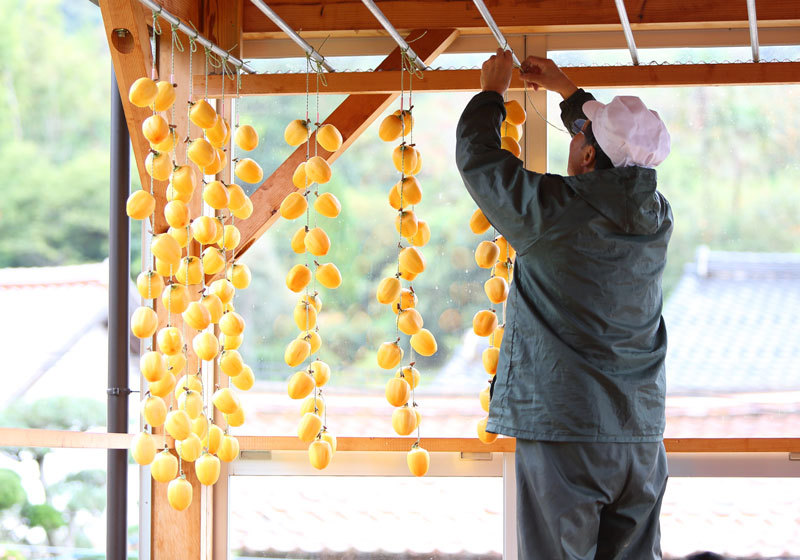 “We go and check the persimmons frequently in the middle of the night, so we only get about three to four hours sleep a day during this season. We hardly ever go anywhere far from home. It takes a lot of work but it means that we end up with a better product.”

The carefully dried and now caramel-colored persimmons have a condensed sweetness, with a sugar content of around 80%.

The persimmon huts in the Hata region are lined with curtains of dried persimmons and look beautiful during the day. Apparently, they look beautiful at night too, as they are lit up with work lights.

Passing the culture of dried persimmons to future generations

The dried persimmons, which require a lot of time and effort to produce, are sold in premium grocery stores and major supermarkets in the Kansai and Kanto regions, under the name Maruhata Hoshigaki.

It debuted in Milano Expo 2015 and was well-received, attracting thousands of inquiries. 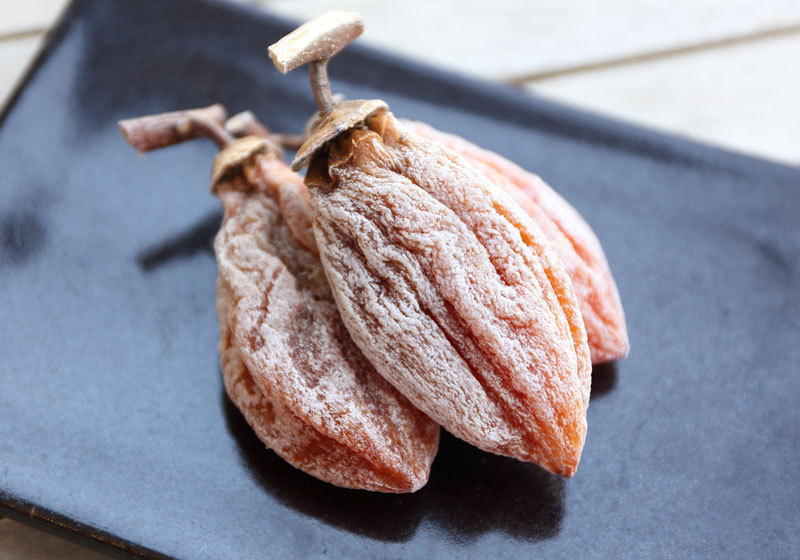 We thought the producers intended to expand their production of dried persimmons, but “No,” says Ishibashi. As each persimmon hut can only handle a limited number of persimmons so it is not possible to produce more dried persimmons. On top of that, the region suffers from an aging population and a shortage of successors.

To break out of this situation, the region has started many new projects. 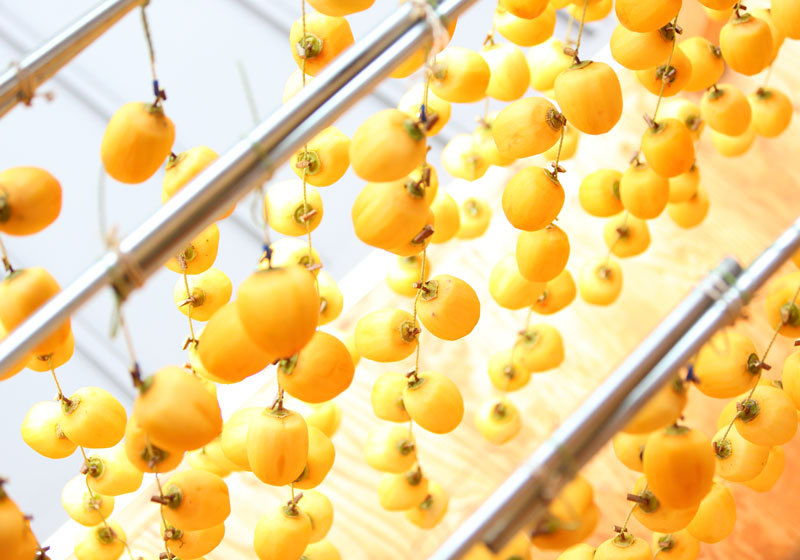 One of them is the “Persimmon Ownership System.” People can become owners of persimmon trees—they can enjoy growing and harvesting the fruit under the guidance of the locals. This system guarantees a harvest of 200 persimmons per tree and has been attracting many people each year.

The producers also welcome elementary and junior high school students to study the orchards and the drying process, in order to enlighten younger generations about the region’s culture of drying persimmons. They also actively host many other events, for example hosting a special café for tourists visiting the region at the time the dried persimmon curtains are being hung to take photographs, serving them fresh and dried persimmons. 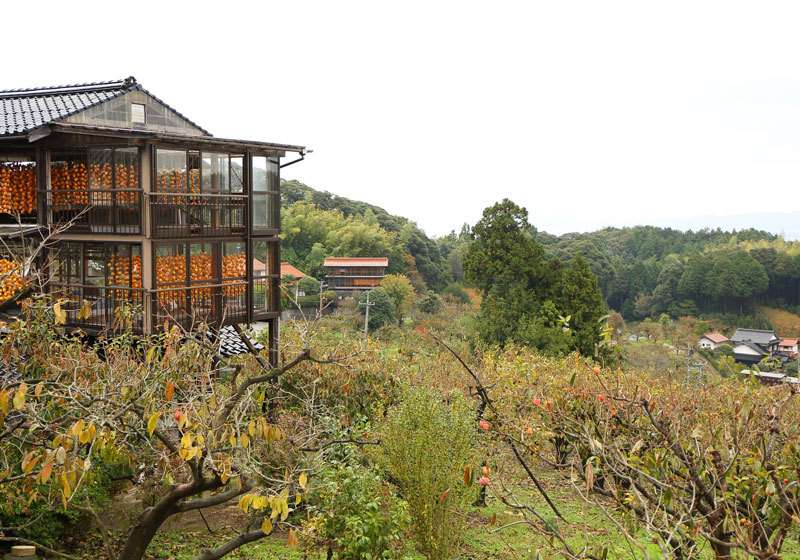 The people of Hata preserve the techniques that have been passed down from generation to generation while trying new things. The culture of dried persimmons has survived not just because of the climate and the region’s environment, but because of the hard work of the locals.

THIS ARTICLE IS BASED ON INFORMATION FROM 02 10,2017 Author：SHUN GATE

Caramel-colored Dried Persimmons Get Sweeter with the Power of Nature and People | DiGJAPAN! 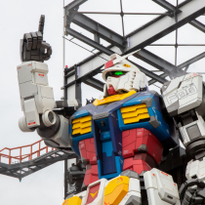