14 Teas That You Can Find in a Japanese Supermarket

Tea is surely one of the first beverages that comes to mind when thinking of Japan. Think of a teahouse in Kyoto and a silent figure in a kimono, expertly brewing a cup of thick matcha to pair with beautifully crafted Japanese sweets.

While matcha is an important part of Japanese culture, it is but one of the countless types of teas consumed in Japan. Japanese teas can be made from a variety of interesting ingredients aside from tea leaves, including herbs, cereals, fruit, beans and even seaweed!
A great and inexpensive place to start exploring all these teas is supermarkets. Here you'll find all the most common types of tea that Japanese people enjoy in their homes. This list includes both teas and infusions, which in Japan are all called "cha" (tea). 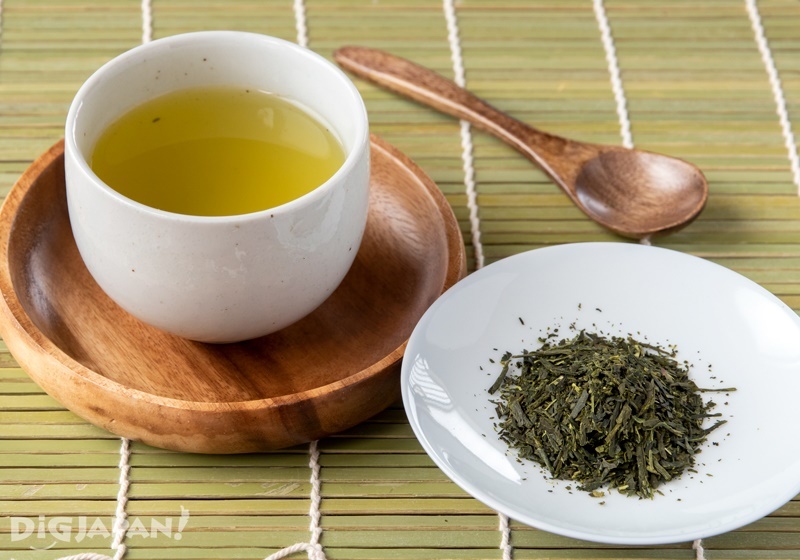 Let's start with a classic. Considered by many the most common among Japanese green teas, sencha is very delicate and easy to drink. The leaves are harvested from plants grown in full sun and steam-heated to stop oxidization. By the way, oxidization is what makes the leaves darken, like in the black tea that is consumed in the West. The fresh, grassy aroma of this tea will make you think of lush green tea plantations. It's said that the catechin contained in green teas gives them antibacterial properties, and some people even use it for gargling. 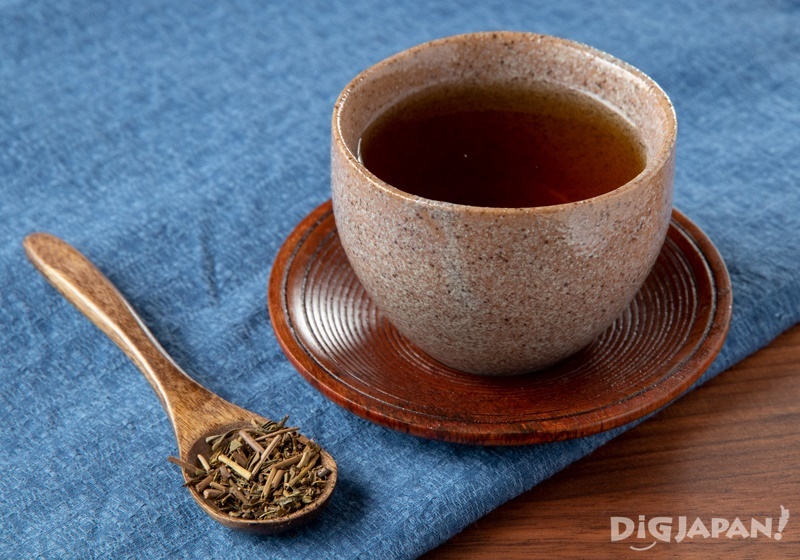 Literally meaning "roasted tea", the name already tells you about how the leaves are processed. Roasting the leaves reduces the bitterness and gives hojicha its characteristic flavor and reddish-brown color. Hojicha also has less caffeine than other green teas which is considered to be more gentle on the body. 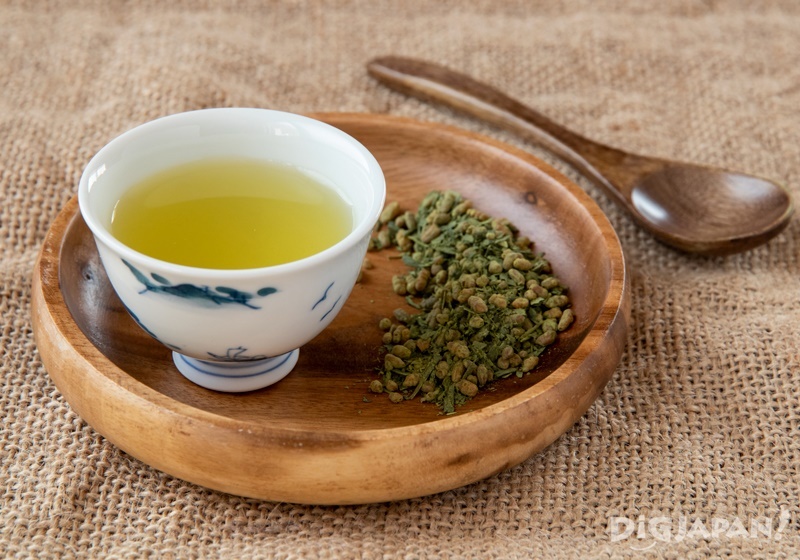 One of my personal favorites, genmaicha is a blend of green tea and roasted brown rice. The cloudy, light green brew has a round and full taste. The brown rice gives wonderful sweet notes to the green tea, balancing the flavor. Sometimes the tea also contains puffy white bits which are rice grains that have popped like popcorn. Mixing the tea with rice reduces the caffeine amount, which is a nice bonus. Highly recommended for people who find green tea too bitter. 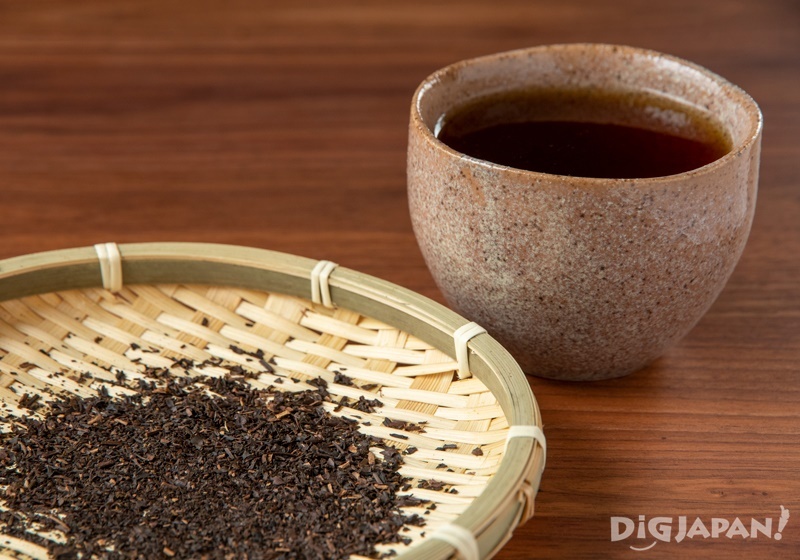 Originated in China, this tea is very popular in Japan. Most supermarkets, convenience stores and vending machines are likely to carry bottled oolongcha. Oolong tea leaves are allowed to oxidize partially, which gives the tea its dark brown color. It has a characteristic smoky flavor that sets it apart from other teas. 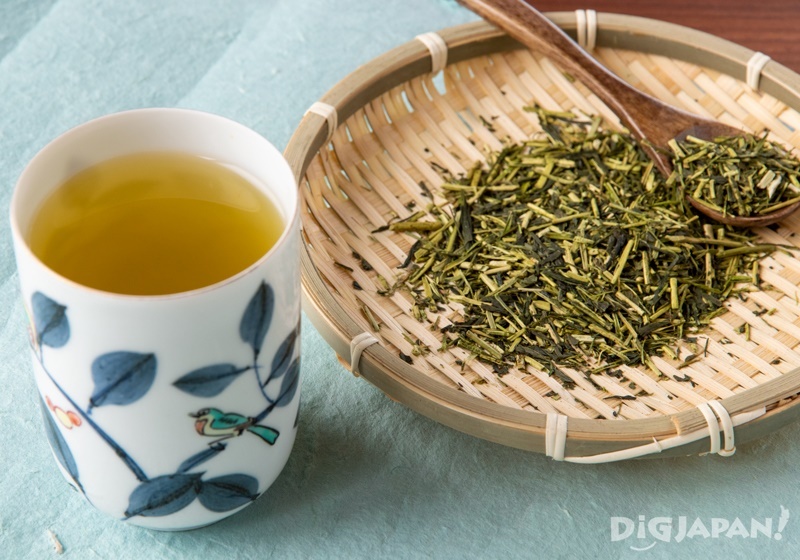 Literally "twig tea", kukicha is made from stems and stalks of the tea plant rather than the leaves. It's similar to green teas like sencha but with a more intense aroma. The taste is mild and refreshing. If you like green tea, definitely try this interesting variation. 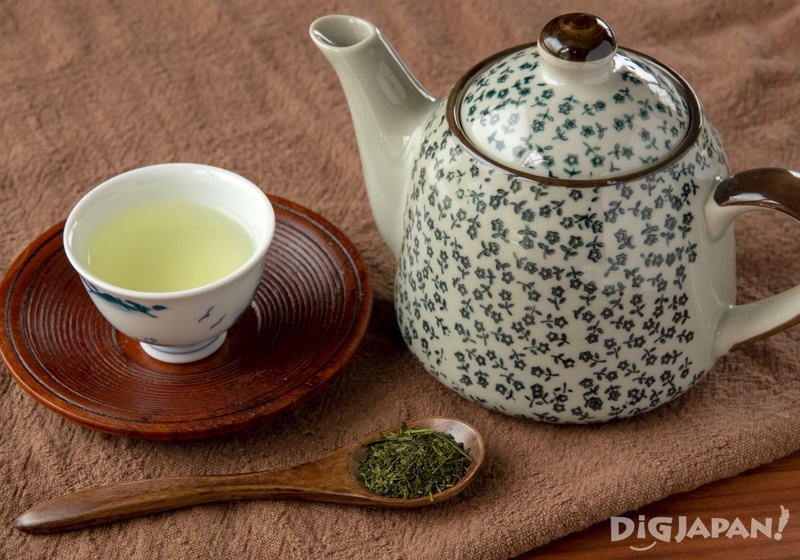 A great example of a seasonal tea. If you're in Japan around May, tea stores and supermarkets will have a special section for shincha or "new tea". This beautiful pale green brew is made from the first leaf harvest of the season. With a more delicate aroma than other green teas, it is a seasonal delight to look forward to.

A staple of Japanese summer, mugicha is an infusion of fragrant roasted barley. Pale brown, with a deep smoky aroma and smooth flavor, the thirst-quenching mugicha is often enjoyed cold. Many Japanese people will tell you of how, as kids on a hot summer day, they used to eat watermelon and drink ice-cold barley tea. The lack of caffeine makes it a popular choice especially for children. 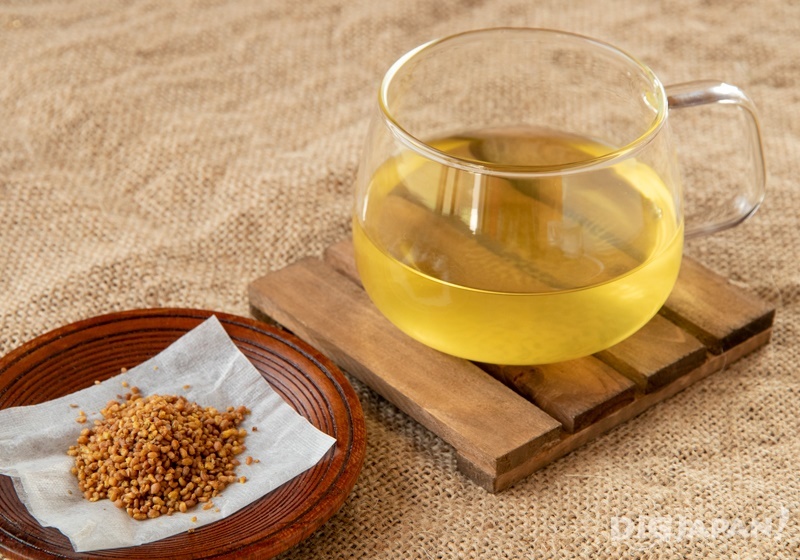 Similar but less common than mugicha, sobacha is made from roasted buckwheat. Bright yellow and with a wheat aroma, this infusion has a milder taste than barley tea and a great balance, with no bitterness at all. Also not containing caffeine, it can be enjoyed hot or cold. 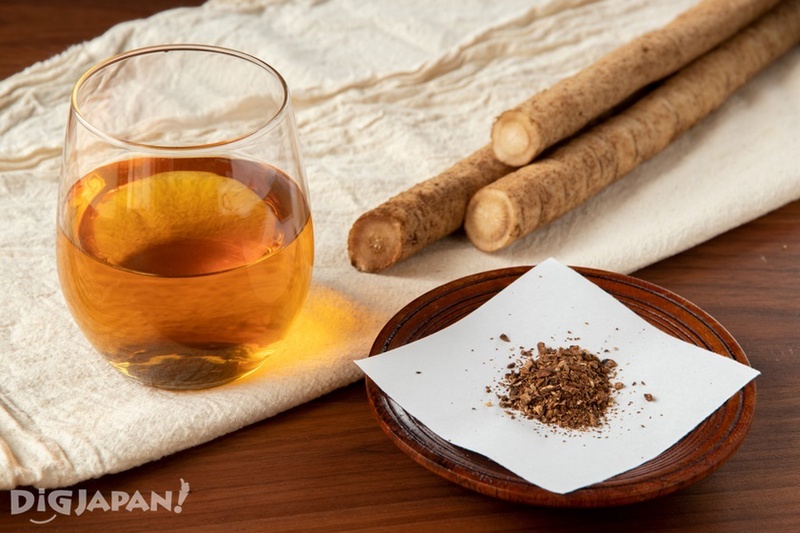 A golden brown color and that unmistakable aroma. Goboucha is made from gobo (burdock) root, a common ingredient in many Japanese dishes. Gobo looks like a long stick and you'll find it in every shop's produce aisle. The tea is said to help digestion and even have rejuvenating properties. It has a fragrant earthy flavor and tastes exactly like the root. It is a very particular tea that I recommend trying at least once. 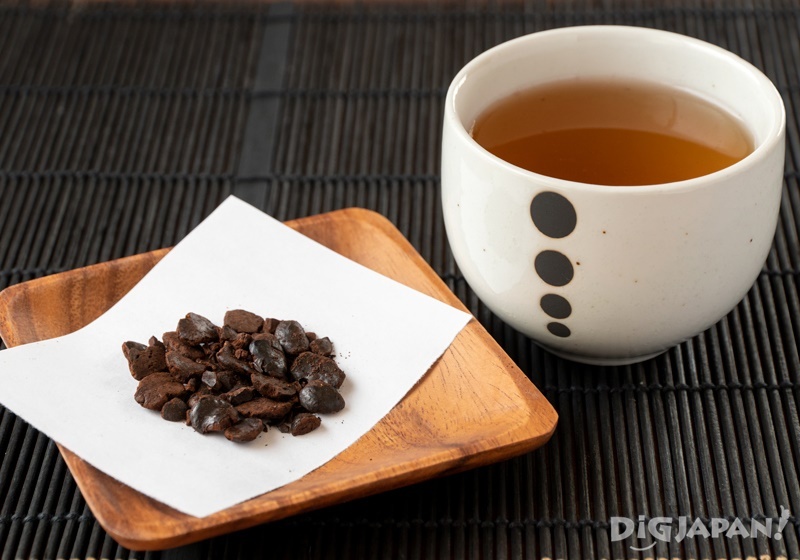 This is another peculiar infusion that is made from kuromame or black soybeans. The beans are roasted to produce a cloudy golden brown brew. The light and toasty aroma is followed by a round and almost sweet taste. Kuromamecha is said to be rich in antioxidants and other beneficial substances. 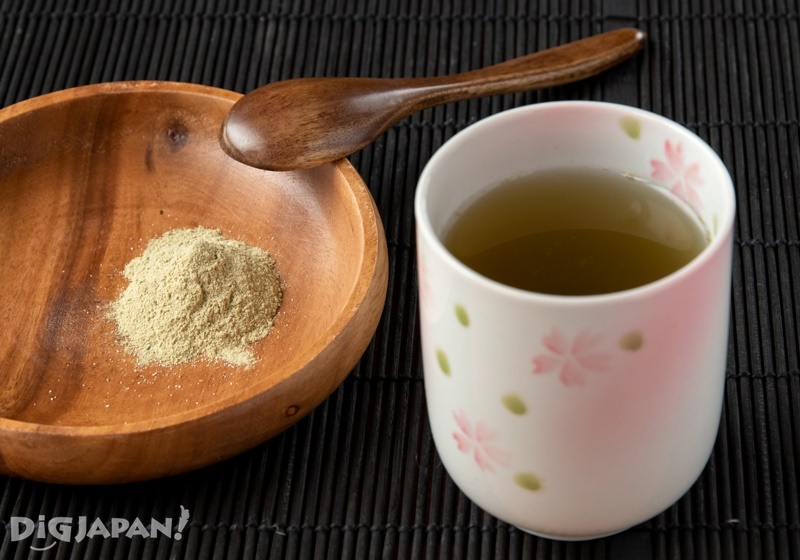 Although it is considered a tea, this could seem more of a soup to some. Not to be confused with the fermented bacteria and yeast beverage that we call "kombucha" in English, in Japan kombu-cha is tea made from the dried kombu kelp. Kombu is a staple ingredient in Japanese cuisine and it is often used as a base for dashi broth. The tea has a strong scent and a mild salty taste. A variation of this tea is adding umeboshi (pickled plum), which gives it a tart note.
Definitely not for everyone but worth giving it a try! 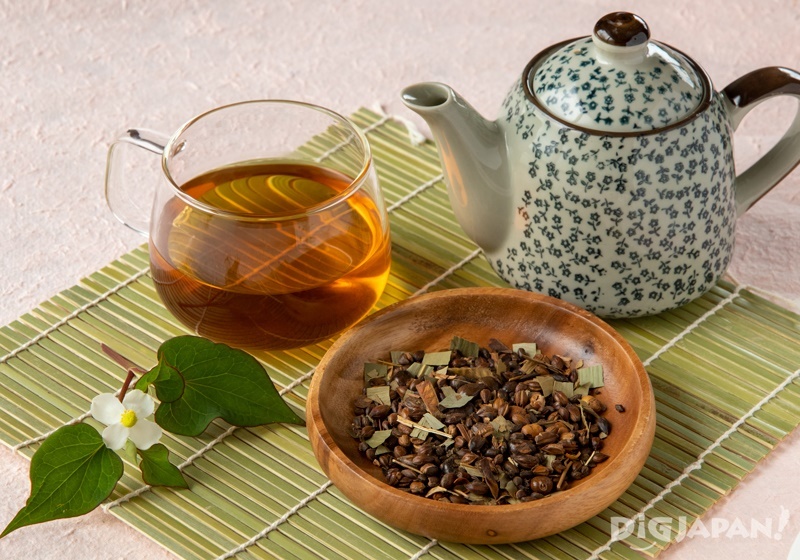 This is a bit of a special tea. While you can find it in most supermarkets it is only produced by one company in Kumamoto Prefecture. Meaning "all purpose tea" or "omnipotent tea", bannoucha is a wonderful blend of 16 or even 20 herbs, grains and legumes. Some of them include maize, soybeans, mulberry leaves, persimmon leaves, licorice and chameleon plant (in the picture). The aroma is sweet and reminiscent of roasted grains. Sipping it reveals a lot of different notes from floral to toasty, given by each ingredient. It is high in anti-oxidants and among its beneficial properties it helps digestion, blood circulation and fatigue. 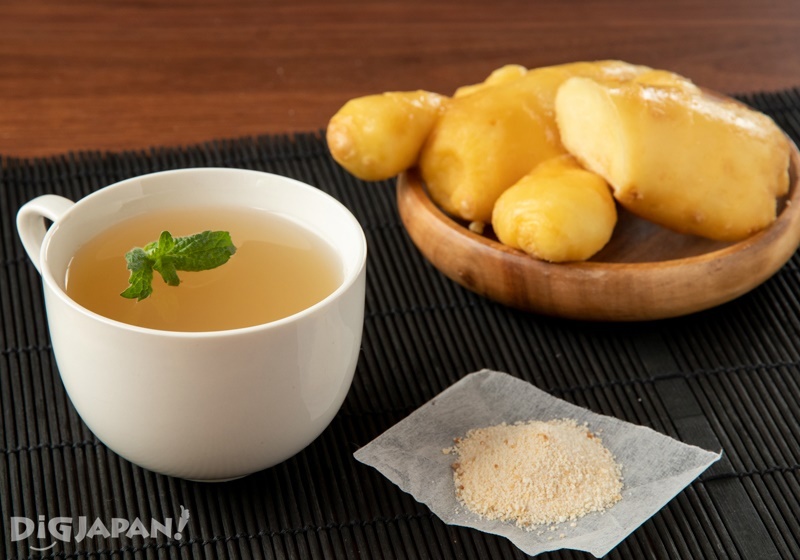 You may know this one already. Ginger tea is enjoyed in Japan as well as in many other countries. Also called shogayu, ginger tea is usually a powder or a jam that you can dissolve in hot water. It's often drunk to soothe colds and sore throats. Some people combine ginger tea with green tea or honey, or both. 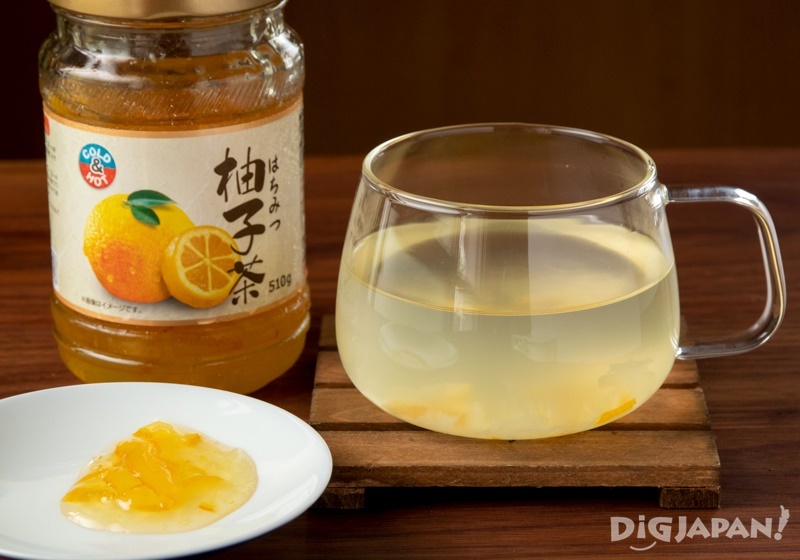 Last but not least, one that will always be present in my winter tea stash. It's made from yuzu, a bright yellow citrus fruit that's less tart than a lemon and very aromatic. It's usually found as a jam, where the peel is mixed with honey or sugar. The sweet taste with a tangy edge will warm you up in the coldest of winter days. 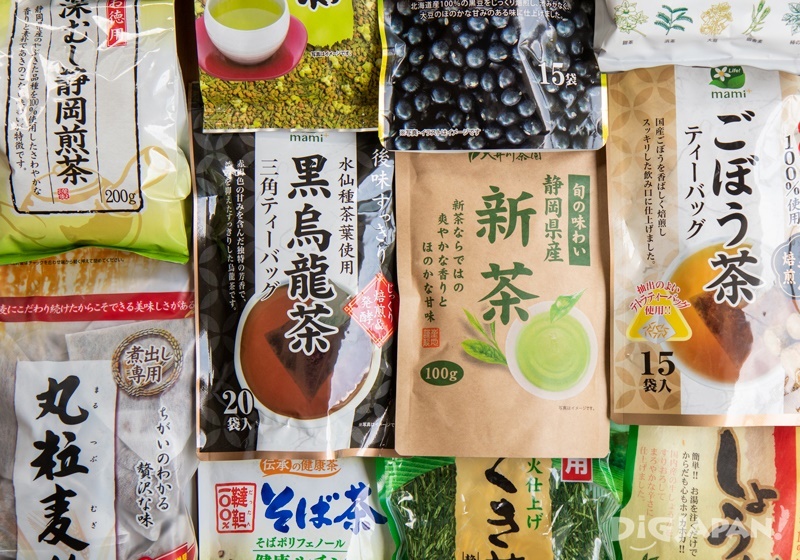 Japan surely is a tea-loving country. Although I have introduced a lot of different teas, these are just a small part of the countless varieties you can find here. Some teas are only available in certain areas of Japan or in a particular season. Not to mention all the premium varieties that are sold in specialized tea shops. But as you can see, you don't need to spend a fortune to enjoy Japanese tea. Every supermarket has a well-stocked tea section where you can find all these teas and more for just a few hundred yen.
I hope this article inspired you to try something new!

*The above article is based on information from May 2020.

THIS ARTICLE IS BASED ON INFORMATION FROM 07 02,2020 Author：DiGJAPAN! Editorial Team

14 Teas That You Can Find in a Japanese Supermarket | DiGJAPAN!