Enjoy the Colors of Japan: Spring and Summer Edition

Spring in Japan. The phrase brings to mind small petals floating on a breeze. While Japanese sakura are iconic even abroad, the color pallet of spring and summer in Japan goes way beyond just pink. In addition to lovely pinks, we’ll show you where to find deep purples, refreshing blues, gem-like greens, and sunny yellows during your warm-weather trip to Japan. 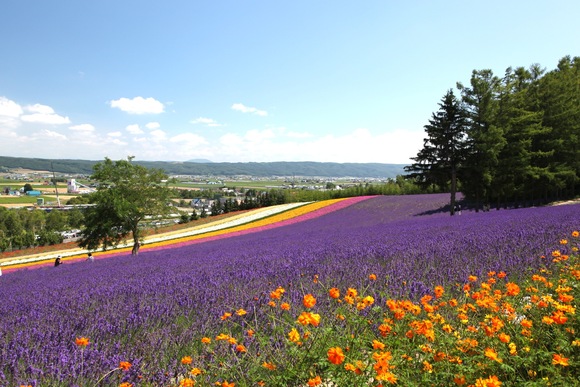 For stunning purples and a breathtaking view of the rural landscape of Hokkaido’s Furano Basin and the Tokachidake Mountains, there’s no better place than the lavender fields of Farm Tomita. In the early summer, the fields are completely covered with a blanket of deep purple. 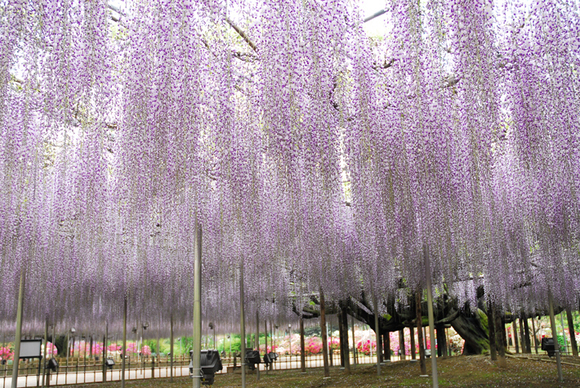 The Ashikaga Flower Park is home to 1,000 square meters of the “World’s Most Beautiful Wisterias.” There are massive wisteria trellises, a large trellis of double flowering wisteria, as well as a 80 meter long tunnel of white wisteria. One visit is all you’ll need to understand why the park is a designated natural monument of Tochigi Prefecture. 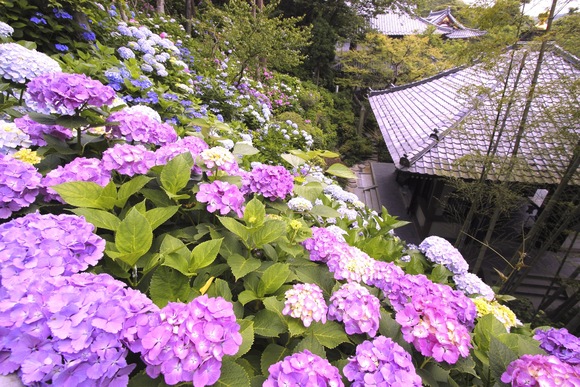 The Hydrangeas of Hasedera Temple (Kanagawa)
When to go: Late-May to late-June
Address: 3-11-2 Hase, Kamakura, Kanagawa

The distinguished hydrangeas of Hasedera Temple have quite a history; they’ve been around since the Nara Period (CE 794– 1185). There are some 2,500 flowers planted on the grounds of the temple and they bloom brilliantly every year from May to June. It’s often said that the hydrangeas here are most beautiful after the rain when drops of water cling to their petals, so take your rain gear and go enjoy! 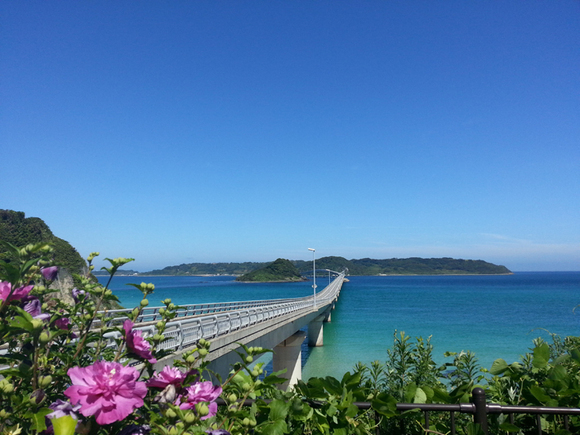 Imagine yourself enjoying a summer drive as the blue-green waters of the Sea of Japan spread out around you. The Tsunoshima Bridge stretches 1,780 meters to connect the island of Tsunoshima with Yamaguchi Prefecture. For a stunning view of the bridge itself (and a phenomenal sunset!) stop by the observation deck inside Amagase Park before you cross the bridge. 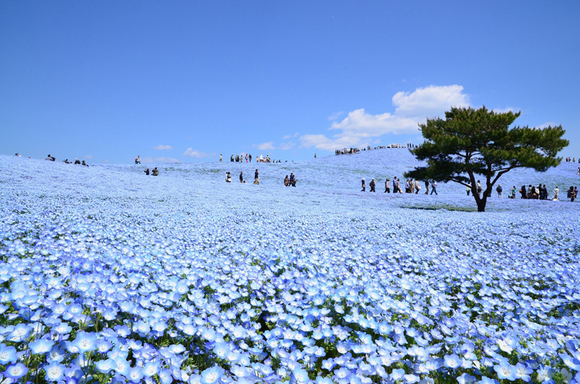 While the Hitachi Seaside Park in Ibaraki is a great place to visit any time of year, late spring is the time to go for incredible blues. Starting in late April, the gently rolling hills of the park are carpeted by approximately 4,500,000 baby blue eyes, turning the entire area a lovely shade of blue. Added bonus: on clear days, you can see Mt. Tsukuba in the distance. 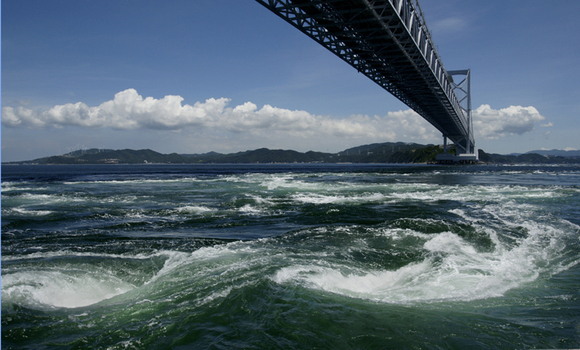 Not all of Japan’s blues are so tranquil. The swirling current that erupts at the Naruto Strait Whirlpool is known as one of the three largest in the world. The incoming tides that cause the phenomenon are the biggest in the spring and fall, causing the whirlpool to grow as large as 20 meters in diameter and reach speeds as fast as 20 kph. Catch this impressive show on video– just be careful not to drop your phone in! 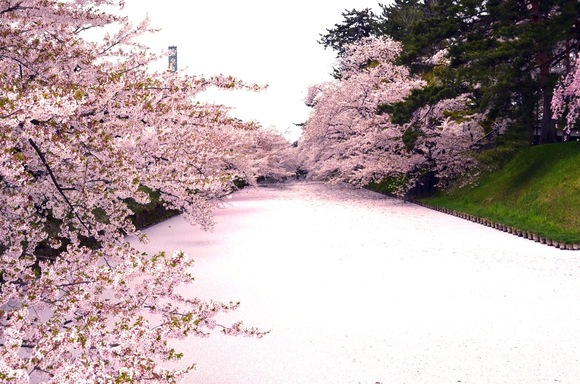 Hirosaki City in Aomori welcomes the return of its famous flowers as the cherry blossom season sweeps down Japan from the north. What sets the cherry blossoms in Hirosaki apart from others in Japan is that multiple flowers bloom from a single bud, giving the branches the appearance of being covered by fluffy bunches of flowers when in full bloom. Both Japanese and visitors from abroad flock to the annual Cherry Blossom Festival held during the peak season for a glimpse of these beautiful flowers. 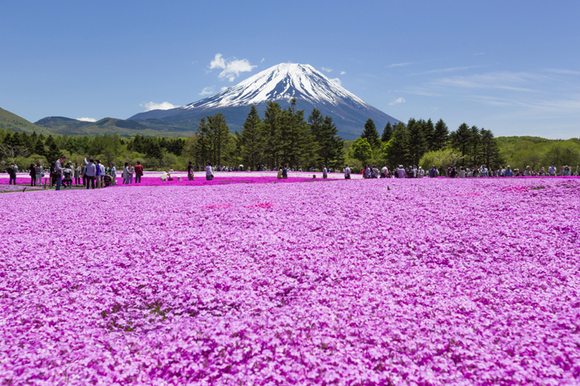 During the Shibazakura Festival, an area at the base of Mt. Fuji is absolutely overtaken by shibazakura, or moss phlox, in shades of pink, white, and eye-popping fuchsia. These impressive little plants bloom so vigorously and so densely that they turn the ground into a carpet of stunning color. The festival grounds also have a great view of Mt. Fuji rising over a sea of pink in the distance. 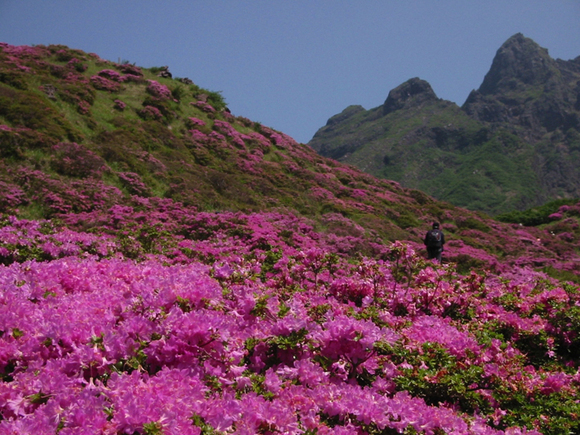 The Kyushu Azaleas of Sensuikyo (Kumamoto)
When to go: Early-May to mid-May
Address: Ichinomiyamachi, Aso, Kumamoto

Situated at the northern foothills of Mt. Naka and Mt. Taka is Sensuikyo, gorges created from flowing lava. From early to mid May, this area is transformed as approximately 50,000 azaleas burst into flower. The name Sensuikyo comes from a legend in which hermits living in the mountains are intoxicated by the beauty of the flowers. 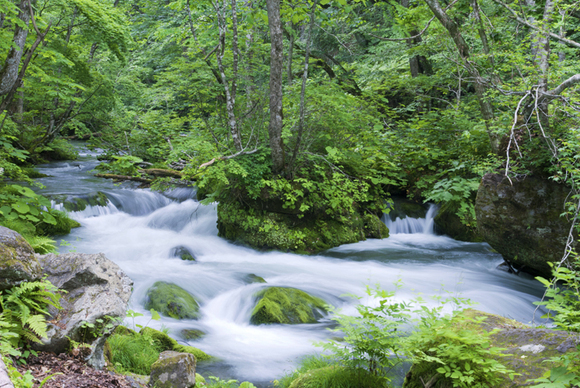 The Oirase Keiryu mountain stream of Aomori flows over 14 kilometers between Towada Nenokuchi and Yakeyama through lush, natural forest. The path of the stream is marked by dozens of waterfalls and various rock formations that give the area an almost other-worldly feeling. New greenery appears from May to June, adding a new layer of gem-like greens to the forest. A well-known portion of the Oirase stream called Asura no Nagare flows most intensely during this time. 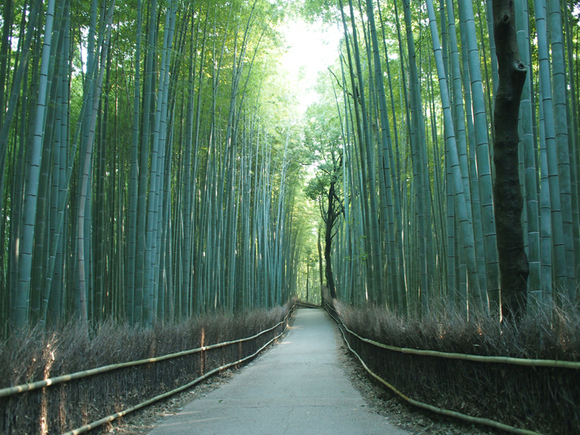 This bamboo forest stretches throughout Sagano on land once known for the villas and retreats of the nobility from the Heian Period. Particularly famous is the path from Nonomiya Shrine to Okochi Sanso, where a cool breeze gently stirs the bamboo as dappled light filters down from the canopy of leaves above. 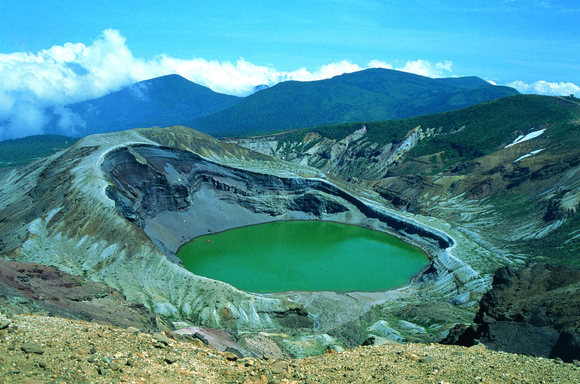 Volcanic Crater of Zao (Miyagi)
When to go: Late-April to early-November (Viewing prohibited during winter and from the end of November to the beginning of April)
Address: Kuraishidakekokuyuchinai Togattaonsen, Zao-machi, Katta-gun, Miyagi

The Volcanic Crater of Zao is a circular crater lake bounded by the peaks of Mt. Zao Kattadake, Mt. Kumanodake, and Mt. Goshikidake. The emerald green surface of the lake combined with the rough crater walls creates a mystical landscape. It is also called the Goshiki Lake (five-colored lake) because the rays of the sun cause the lake to change in color. 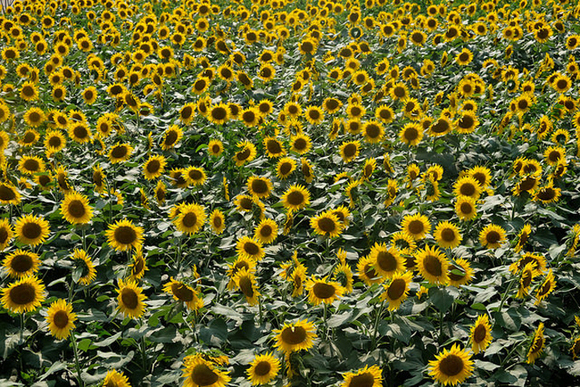 The Akeno Sunflower Field celebrates a bloom of mainly hybrid sunflower species, spanning an area of approximately 6.1 hectares. It is the largest in Japan for total area. The annual Sunflower Festival provides a magnificent view of approximately 600,000 flowers all packed into one space. 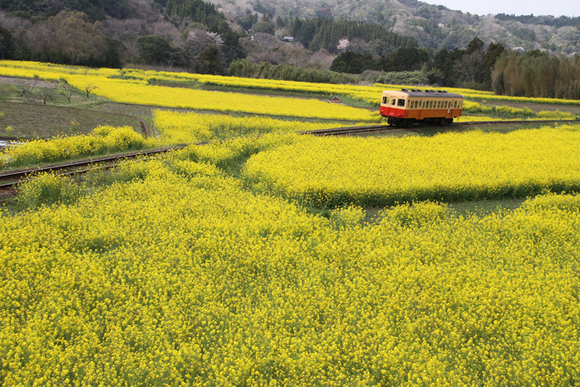 The Kominato Railroad is the local line that passes from Goi Station to Kazusa-Nakano Station in Chiba’s town of Ichihara. In the warmth of the spring sunshine, you can gaze leisurely from the train window at the mustard flowers spreading out as far as the eye can see. If you’re lucky, you can see the mustard flowers and the cherry blossoms in bloom at the same time. 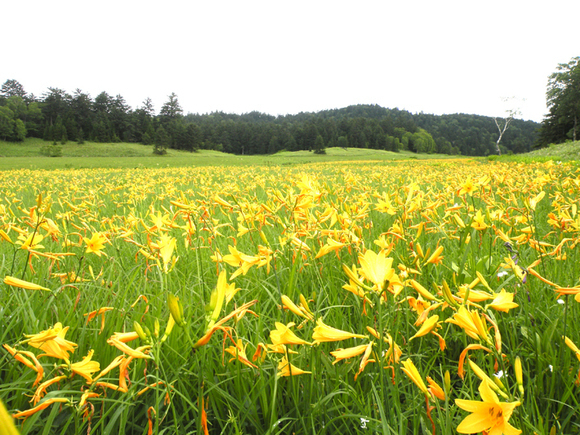 Day lilies grow thick in these pleasantly sunlit marshlands, covering the stretch of land in bright yellow. Although the blooming period is only about two weeks and can be difficult to predict, the sight of hundreds of lilies blooming together makes it worth the effort.

No matter when you come to Japan, there's always beautiful scenery waiting for you to discover. Which of Japan's colors is your favorite? Let us know in the comments and see you next time!

THIS ARTICLE IS BASED ON INFORMATION FROM 01 29,2016 Author：DiGJAPAN! Editorial Team