10 of Osaka's Most Picture-Worthy Signs

Every city has its obligatory photo spots. You’ve got the Scramble Crossing in Shibuya, Kinkaku-ji Temple in Kyoto, and the Peace Memorial in Hiroshima just to name a few. When in Osaka, pictures of the crazy signs and billboards are an absolute must. What could possibly make billboards that picture-worthy? Read on and find out. 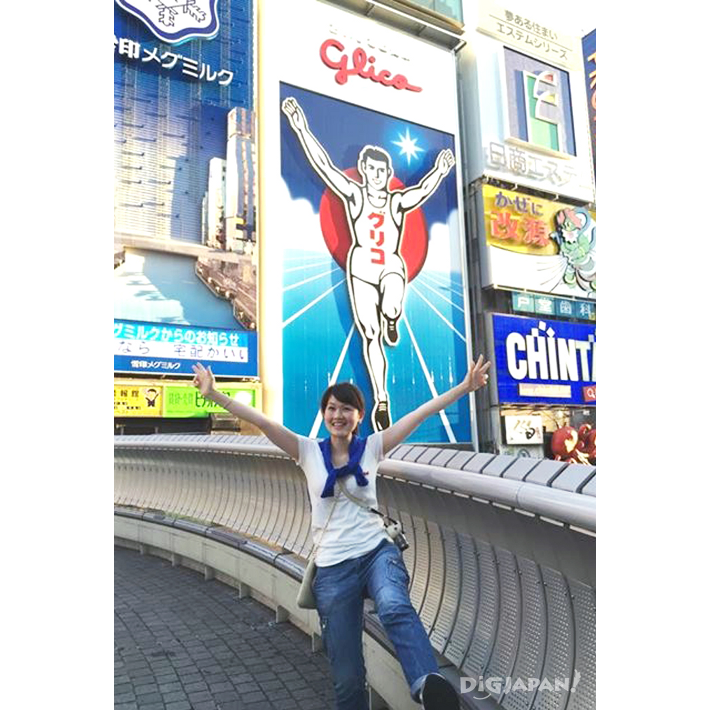 Do a Google Image search of Osaka and it’s almost guaranteed that you’ll see an image or two of the Glico Sign at Dotonbori. It advertises Glico, one of Japan’s major confectionery companies. This billboard is massive at 20 m (approx. 66 ft.) tall and 10.4 m (approx. 34 ft.) wide. People usually take a picture of the Glico Sign while standing on the Ebisu Bridge. The only challenging thing is that the bridge is nearly always very crowded so timing will be key. If you want to take a picture of the sign from head on, try the Tonbori Walk across the river. 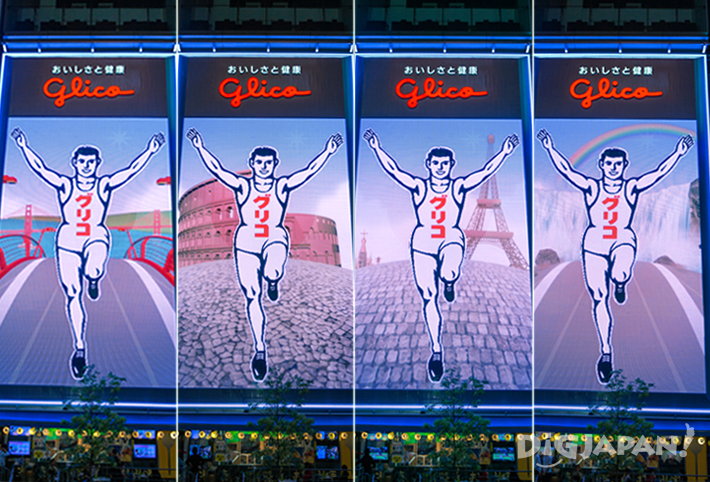 Since 2014, pedestrians have been able to enjoy the Glico Runner sprinting triumphantly in a variety of landscapes thanks to the installation of LED lights. Backgrounds include famous sightseeing destinations in Osaka, Tokyo, and Kyoto, as well as the Eiffel Tower in Paris, Big Ben in London, Niagara Falls, and more.

The billboard is lit daily from 6:00pm to midnight. 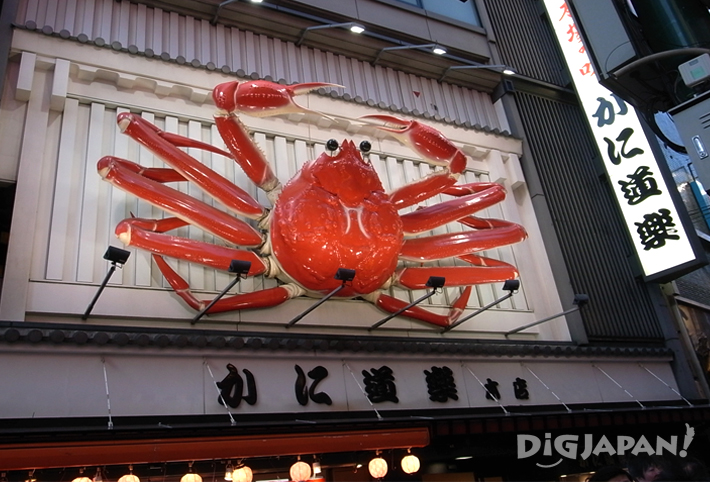 Kani Doraku is a popular chain restaurant specializing in cuisine made from crab that got its start in Osaka. In addition to some fantastic crab, another reason to make a trip to Kani Doraku is for the sign with the giant crab. Its legs move, which is a cute touch. Every shop has a sign like this, and apparently they all move in a slightly different way. This guy comes in at 4 m (approx. 13 ft.) tall and 8 m (approx. 26 ft.) wide. It’s said that if this were a real crab, he could feed about 16,000 people. 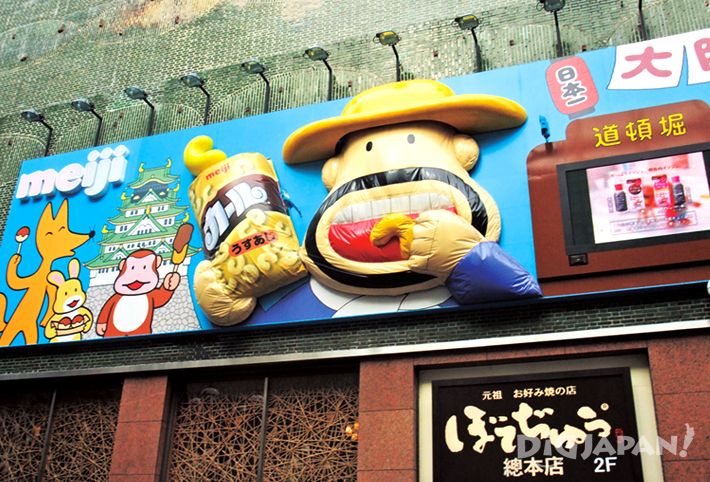 "Karl" (written カール in Japanese and pronounced kah-roo) is the name of a snack produced by Meiji Holdings, Co., Ltd. To celebrate the 40th anniversary of this popular snack first hitting the shelves, they decided to erect a huge billboard featuring "Karl Ojisan," the snack's image character. The billboard is 4 m (approx. 13 ft.) tall and 18 m (approx. 59 ft.) wide. "Karl" himself measures 85 cm (approx. 3 ft.) in length. At the top of every hour, Karl Ojisan moves. Specifically, his hat rises to reveal the small green frog character Kerota-kun. If you come at 3pm, Japan’s typical snack time, you can enjoy the extra bonus of seeing yourself appear live on a big TV monitor on the right side of the billboard. 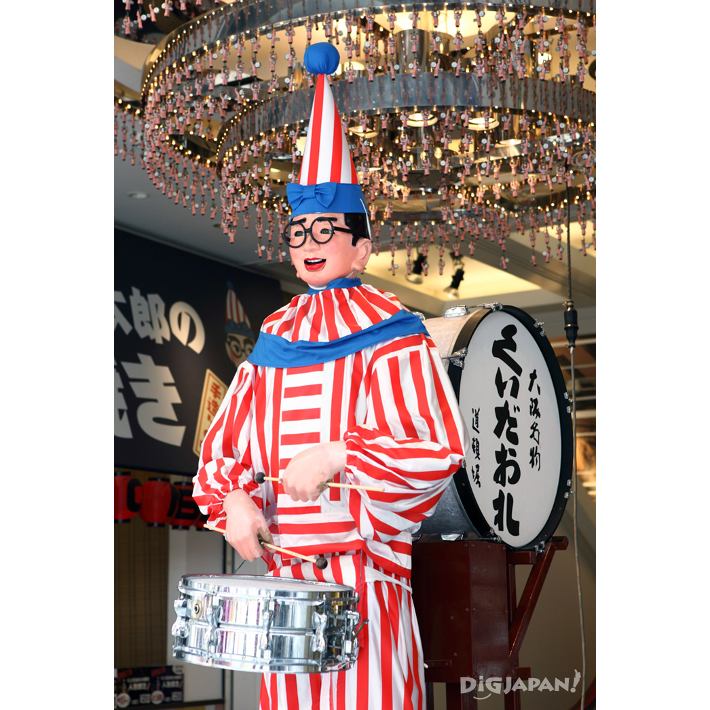 Meet Kuidaore Taro. Dressed in round glasses with thick, black rims and a clown-like costume, this drum-beating fellow has been a favorite among visitors to Osaka since his debut in 1950. You can still see him now on the first floor of the Nakaza Kui-daore Building. His rather peculiar name reflects the importance that Osaka places on food. The word kuidaore means to bring financial ruin upon oneself by overindulging in food and drink. With all the delicious foods in Osaka, it’s not hard to imagine meeting this fate. (By the way, taro is a common ending for Japanese male names.) Take a picture together and celebrate Osaka’s indulgent food culture! 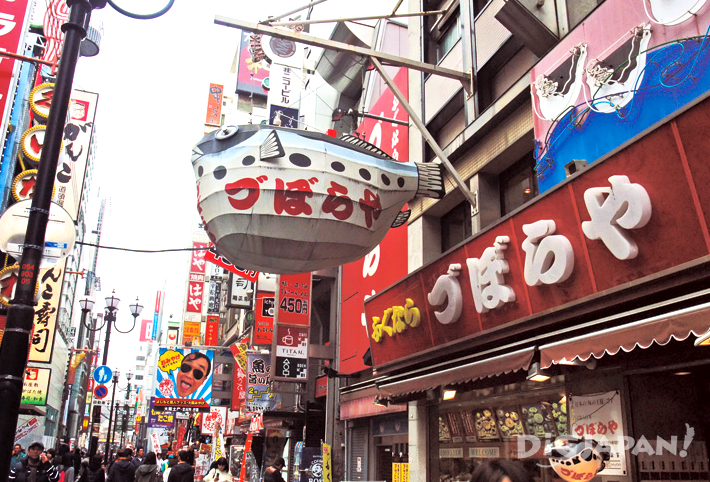 Watch out for the gigantic fugu sticking out into the street! Puffed out round with its little fins sticking straight out, this is a particularly lovable sign. He measures 5 m (approx. 16 ft.) long and has a girth of 3 m (approx. 10 ft.). And while he may look like he’s full of air, this solid little guy tips the scales at close to 100 kg (approx. 220 lbs.)! At night, he acts as a lantern guiding hungry passersby to Zuboraya. As you might have guessed, Zuboraya specializes in dishes made from fugu (pufferfish). For a comparatively reasonable price, you can try tecchiri (a hot pot made with fugu) or tessa (fugu sashimi) here. 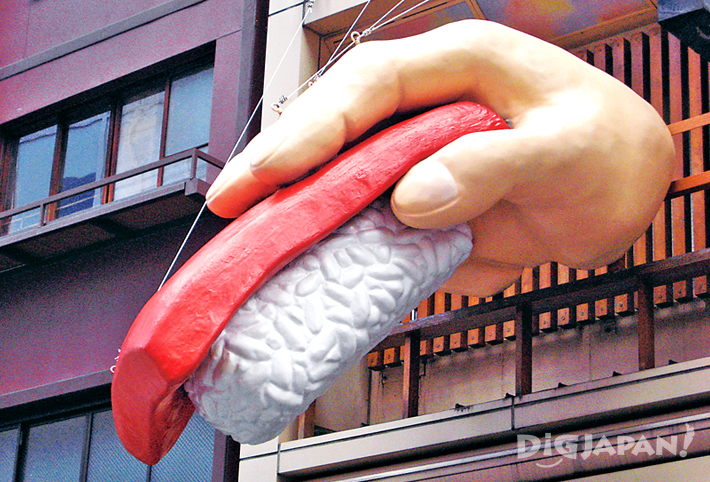 Here’s a fun fact: it’s said that Ganso Mawaru Genroku Sushi became the first conveyor belt sushi restaurant in the world when it opened its doors in 1958. At their second store in Dotonbori, you can check out their rather unusual sign. It's a monster-sized piece of maguro (tuna) sushi being passed to you, the waiting customer, by a disembodied hand. 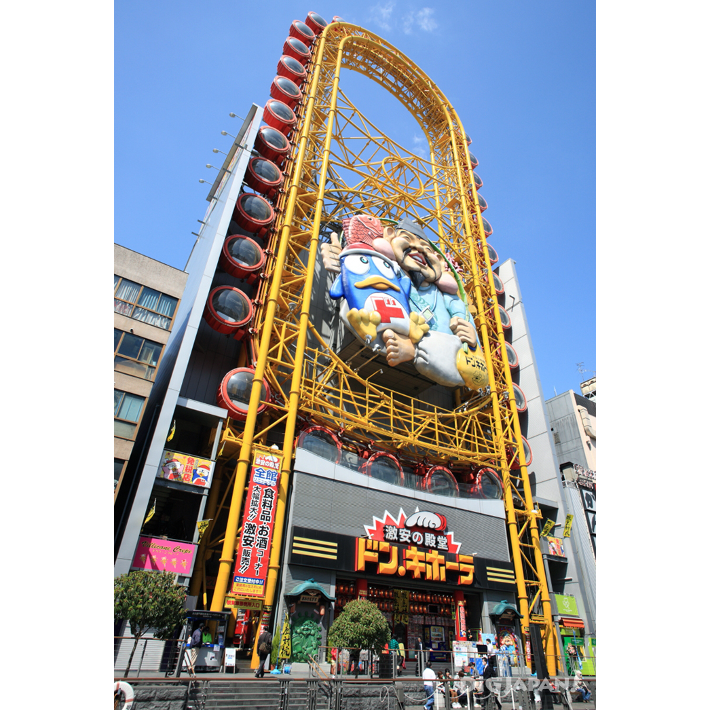 The Dotonbori branch of the popular discount store Don Quijote has a very unique billboard. Ebessan, the god of thriving business, can be seen chilling out with Donpen, Don Quijote’s cute penguin mascot, encircled by an elliptical Ferris Wheel. Unfortunately the Ferris Wheel is not currently in operation, but it’s still a worthwhile picture spot especially when lit up at night. 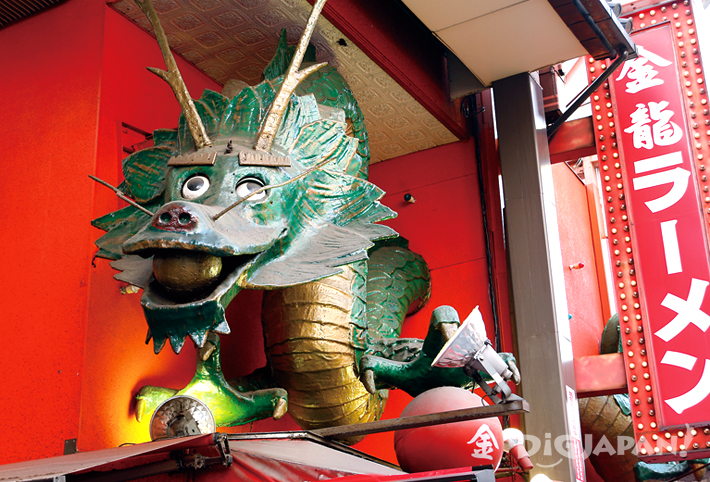 Considering their name means golden dragon, popular Osaka ramen-ya Kinryu has chosen a rather appropriate theme for their sign. This dragon glides effortlessly through bright red walls outside the restaurant, clutching a gold and red jewel in its claws. This chain has five branches throughout Osaka, each with a dragon that’s said to be slightly different from the other. Ramen lovers should definitely use this as a reason to stop by each shop! The Dotonbori location is particularly popular for its outdoor seating. 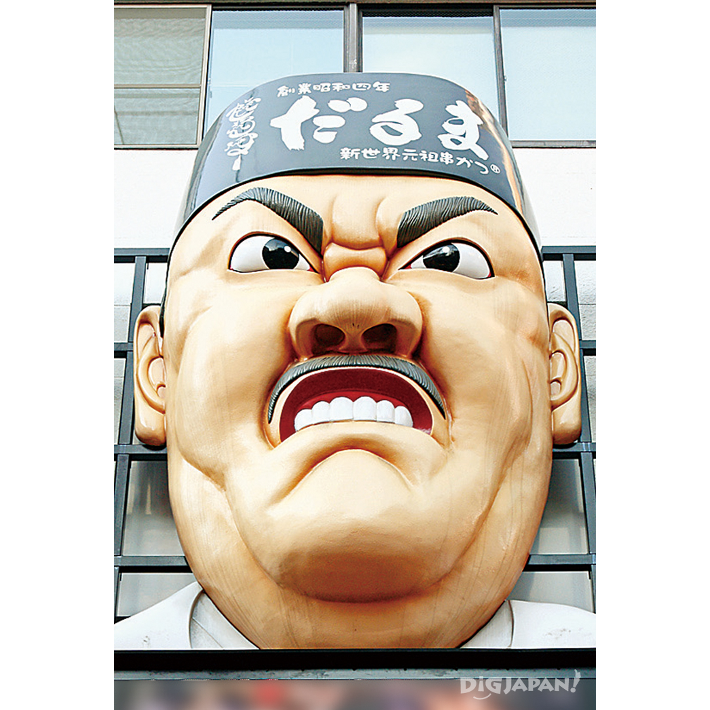 Ever get really mad at someone for double-dipping? If so, you’ll find a friend in the billboard at Kushikatsu Daruma. This livid-looking billboard is modeled after the current president. What’s he so angry about? People double-dipping their kushiage-- deep-fried skewered meat and vegetables-- in the sauce that’s set out for everyone to use! Escape his wrath and don’t double-dip! 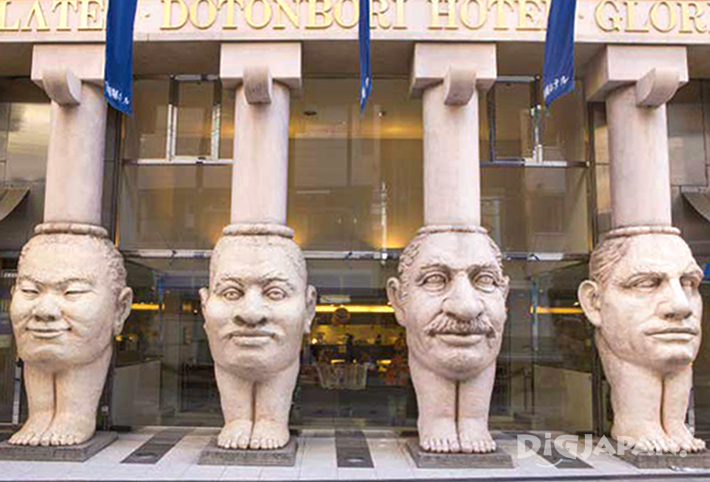 For a slightly more macabre display, head to the Dotonbori Hotel. You’ll find four human-shaped pillars waiting to greet you at the entrance-- if you consider gigantic human heads perched on human legs with nothing in between to qualify as "human-shaped." Each head was designed to resemble a different race, and each is said to carry its own blessing. The Asian head is supposed to bring good fortune in matters of friendship and love, the African one physical beauty, the Middle Eastern one financial prosperity, and the Western one career advancement. In order to get this good luck, though, it’s said that you have to press your cheek to theirs, so be ready to get cuddly with the statues.

Ranging from cute to a little creepy, the signs of Osaka are a must-see while traveling in this fantastic city. Do you have a favorite, or maybe one you’d like to recommend that didn’t make our list? Let us know in the comments below! 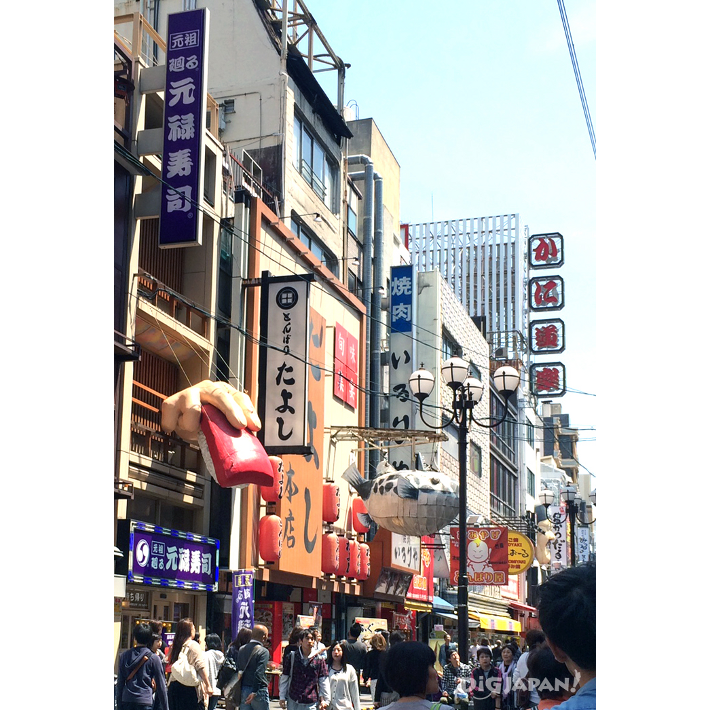 THIS ARTICLE IS BASED ON INFORMATION FROM 07 13,2016 Author：DiGJAPAN! Editorial Team 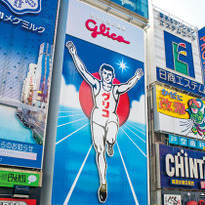 Get a taste of some of Osak... 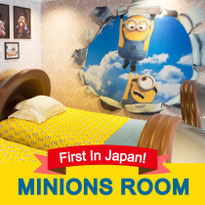 Spend the night in the wor... 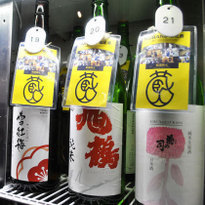 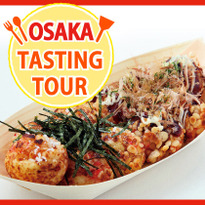 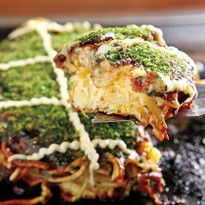 Where Osakans go for okonomiyaki

No trip to Osaka is comple...

There is a wide range of it...