The Ryokan Tokyo Yugawara:
A New Style of Ryokan

Spending a night or two in a ryokan is often one of the most attractive parts of a trip to Japan. It can also be one of the most expensive, especially in areas famous for onsen and ryokan like Hakone. But sticking to a budget while traveling doesn’t mean you have to sacrifice on uniquely Japanese accommodation. Opening in March 2016, The Ryokan Tokyo Yugawara is offering a new style of ryokan accommodation that is both budget friendly and very Japanese. 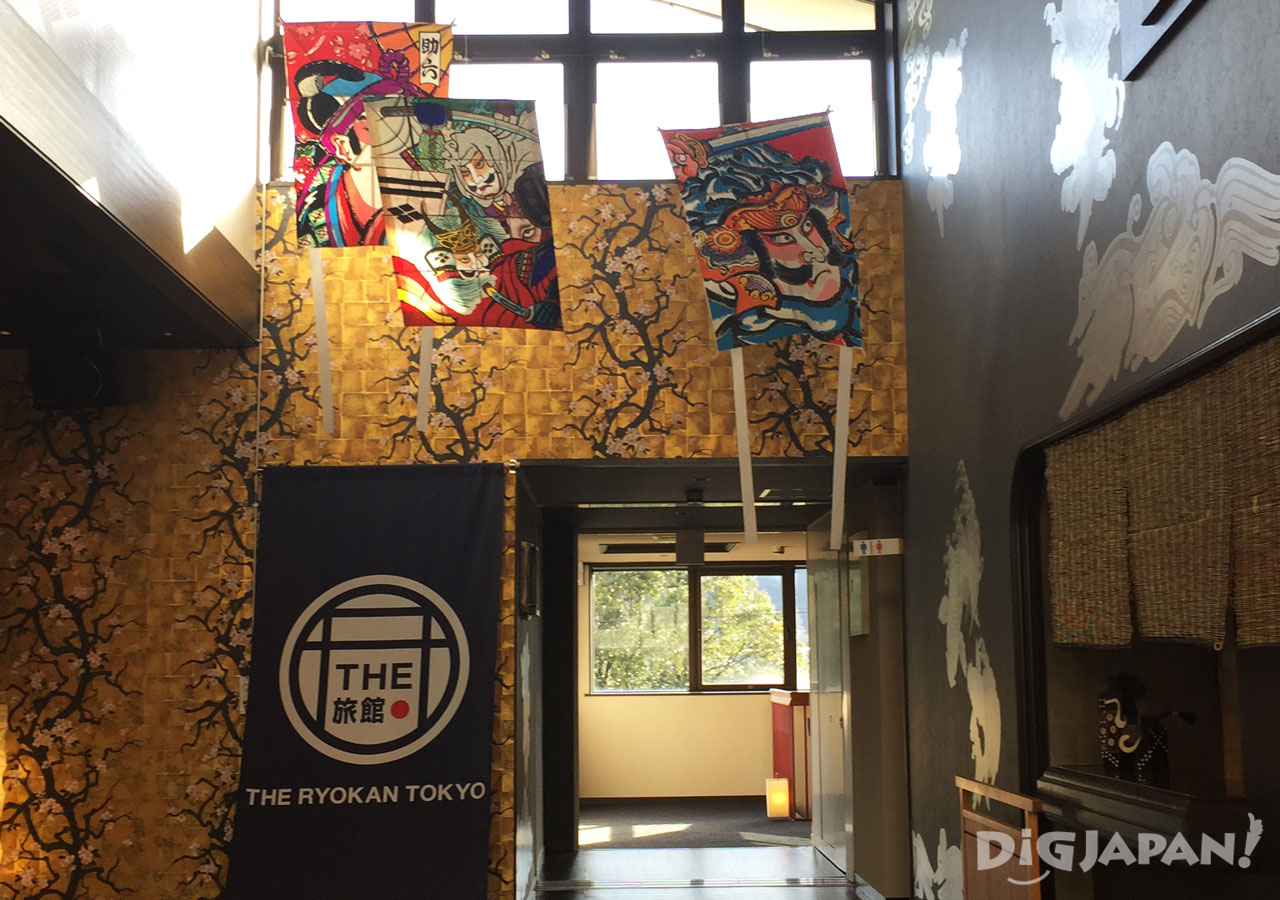 In the lobby, you'll see ukiyo-e style drawings on kites and patterns on the walls reminiscent of byōbu folding screens.

The design concept of The Ryokan Tokyo is Japan as seen through a traveler’s eyes. You’ll see several of Japan’s most famous landmarks and art forms worked into the design of the hotel. For example, the row of red arches covering the walkway up to the hotel is reminiscent of the thousands of torii at Fushimi Inari Taisha in Kyoto. And the huge red lantern hanging in the foyer? If you guessed the Kamimarimon at Sensō-ji Temple in Asakusa, you’re right! The walls of the lobby area are covered with floor to ceiling pictures of instantly recognizable landmarks such as Mt. Fuji, the Great Buddha of Kamakura, Tokyo Tower, and the gassho-zukuri houses of Shirakawa-go. 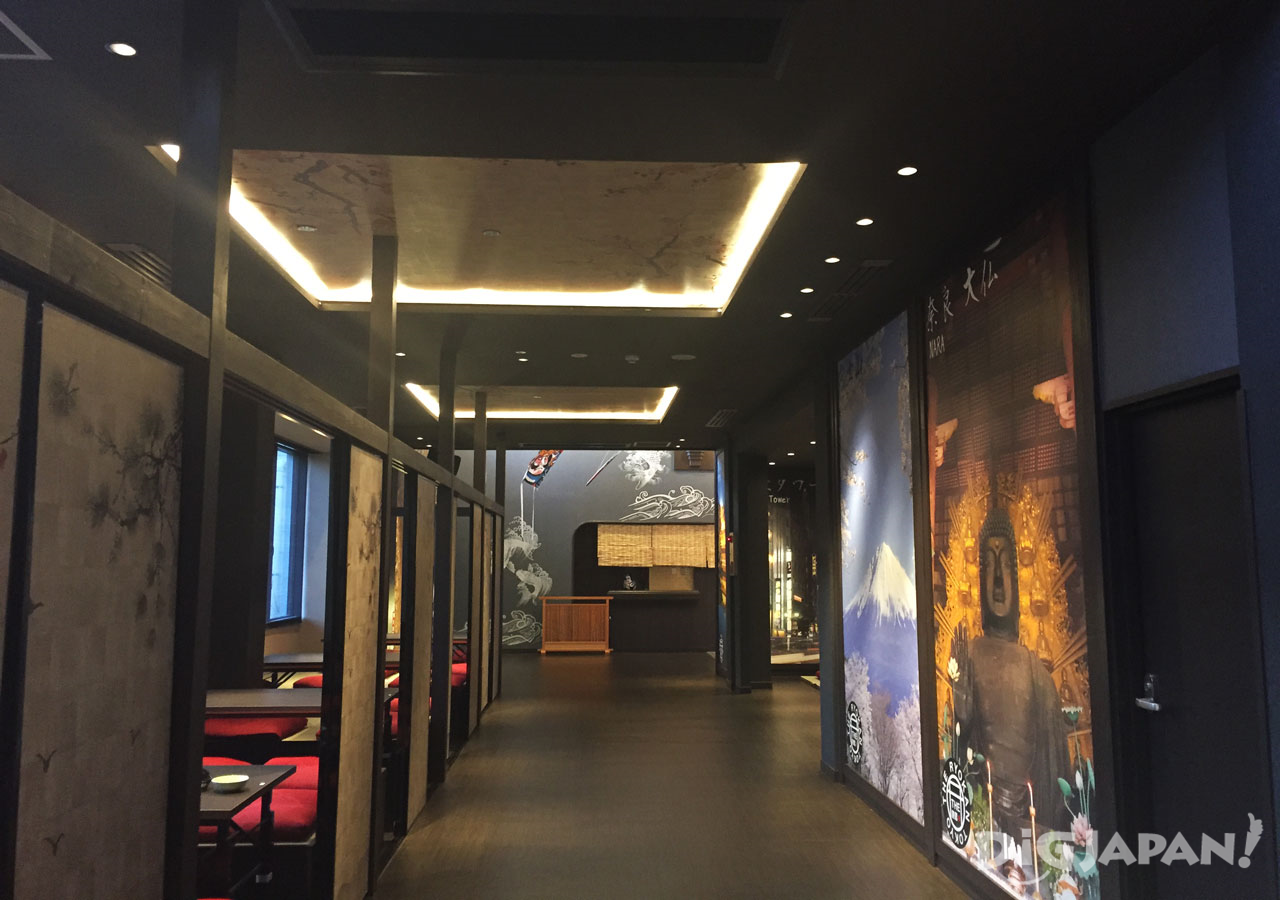 The main area of the facility is decorated with images of several of Japan's most famous locations.

The result of this “Japan does Japan” decor is charmingly campy and feels akin to Oedo Onsen Monogatari-- an onsen chain that combines quality bathing and spa facilities with a main concourse that’s designed to look like a (larger than life) town from the Edo period. The goal of this quirky design is to inspire travelers to get out and see the real Japan while offering accommodation that’s cheap enough so you can actually afford to do so. 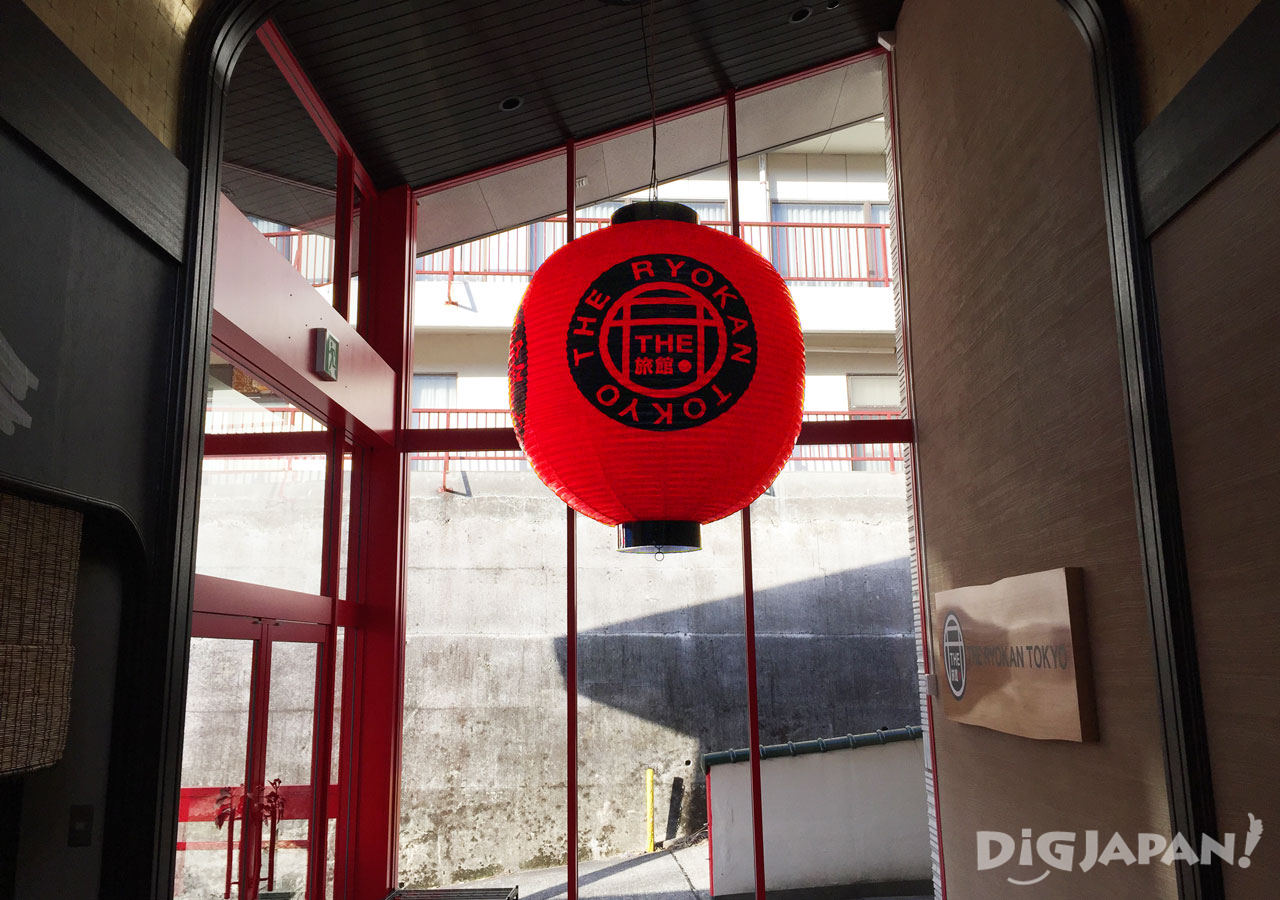 The Ryokan Tokyo's take on the Kaminarimon at Sensō-ji Temple.

The Ryokan Tokyo has both ryokan-style accommodation as well as dormitory-style bunks. While looking around during their pre-open event, I thought that it would be a great option both for solo travel bloggers or for larger groups backpacking through Japan. The accommodations are clean, comfortable, and fun. Because The Ryokan Tokyo offers meals and other services separately from the cost of accommodations, it’s easy to adjust the price to fit your needs. 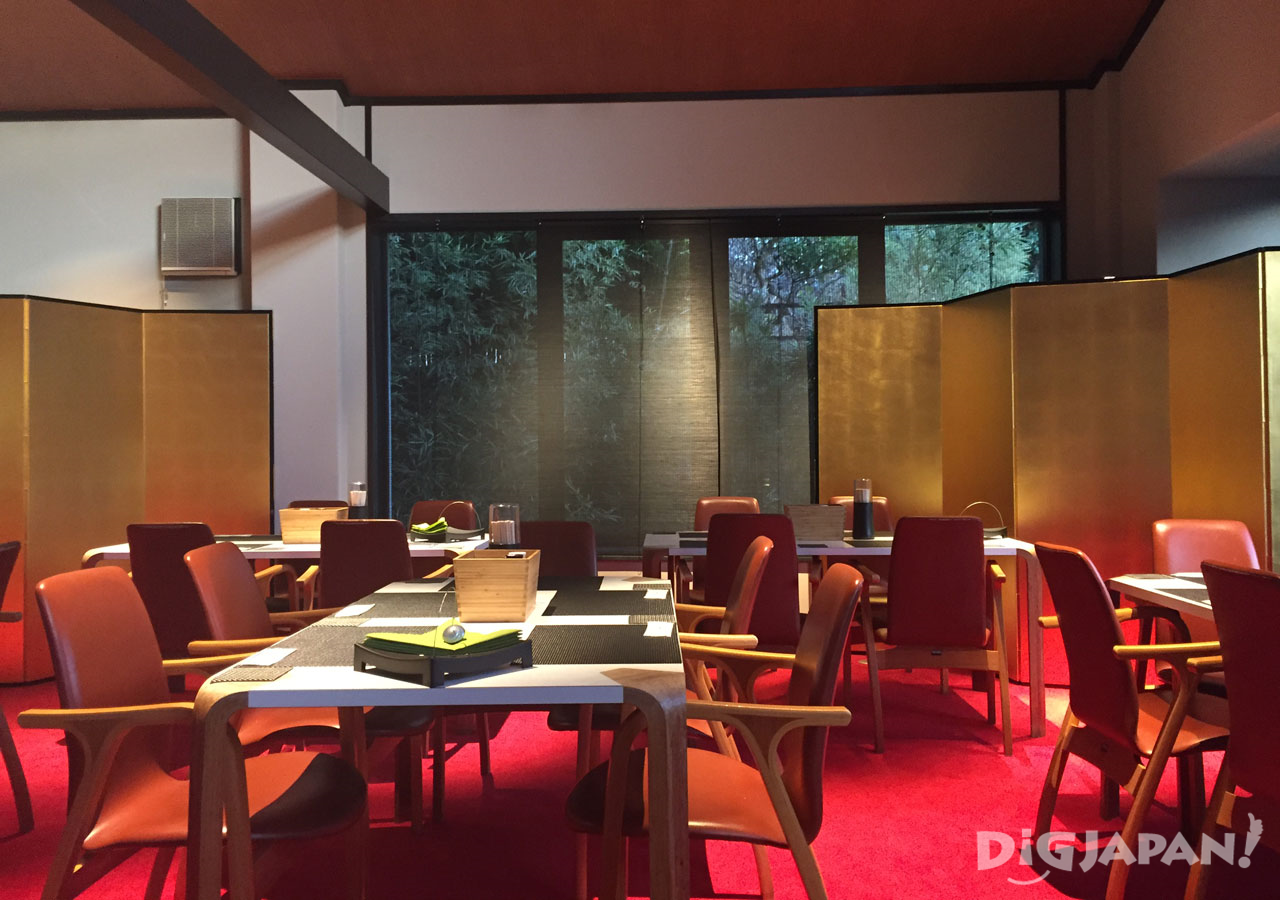 One word of caution if you’re considering not using their breakfast service. There’s no convenience store within walking distance of the facility, so stock up on snacks and supplies at the convenience store at Yugawara Station before you head to the ryokan for the night. 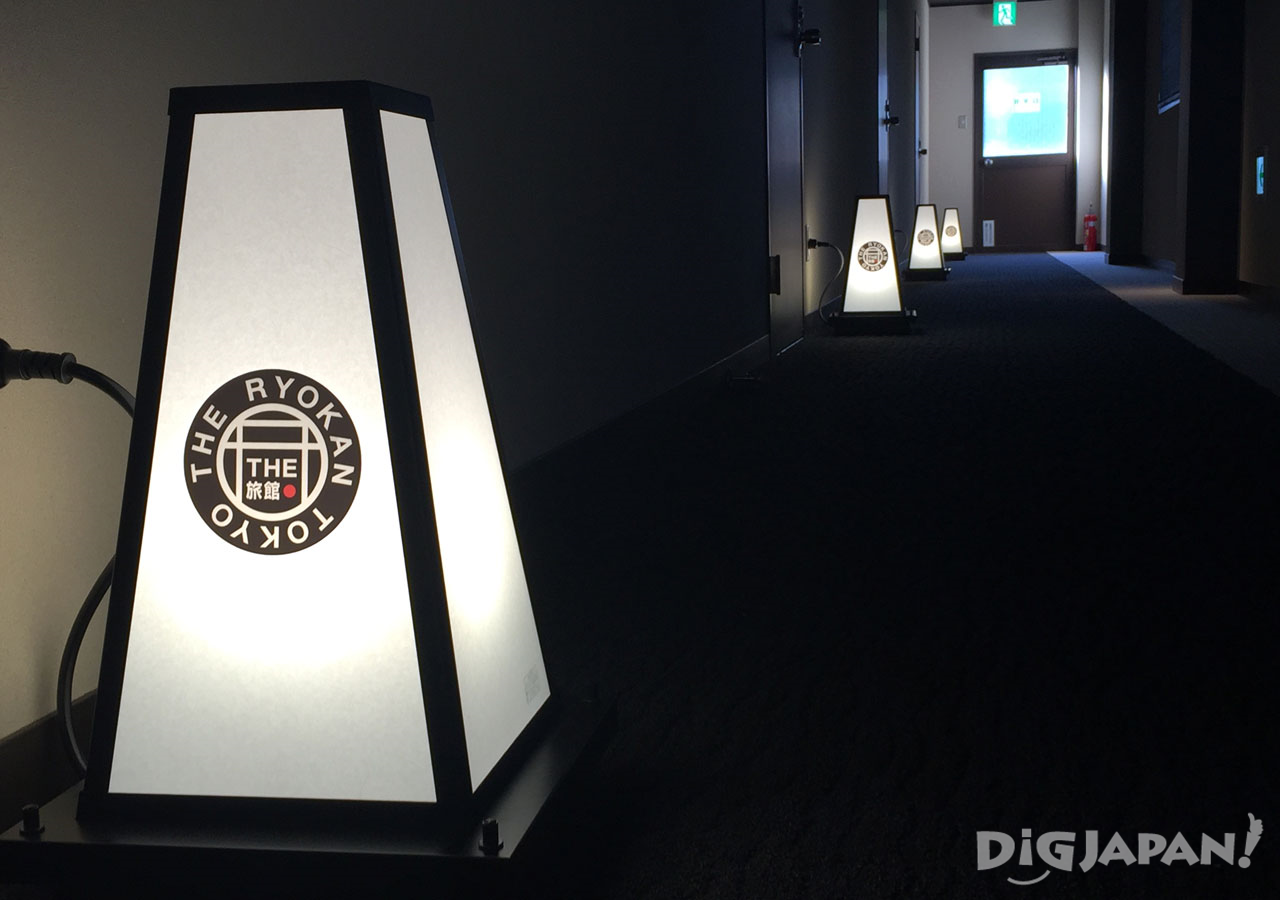 There are small lanterns with the ryokan's logo outside every tatami mat room. 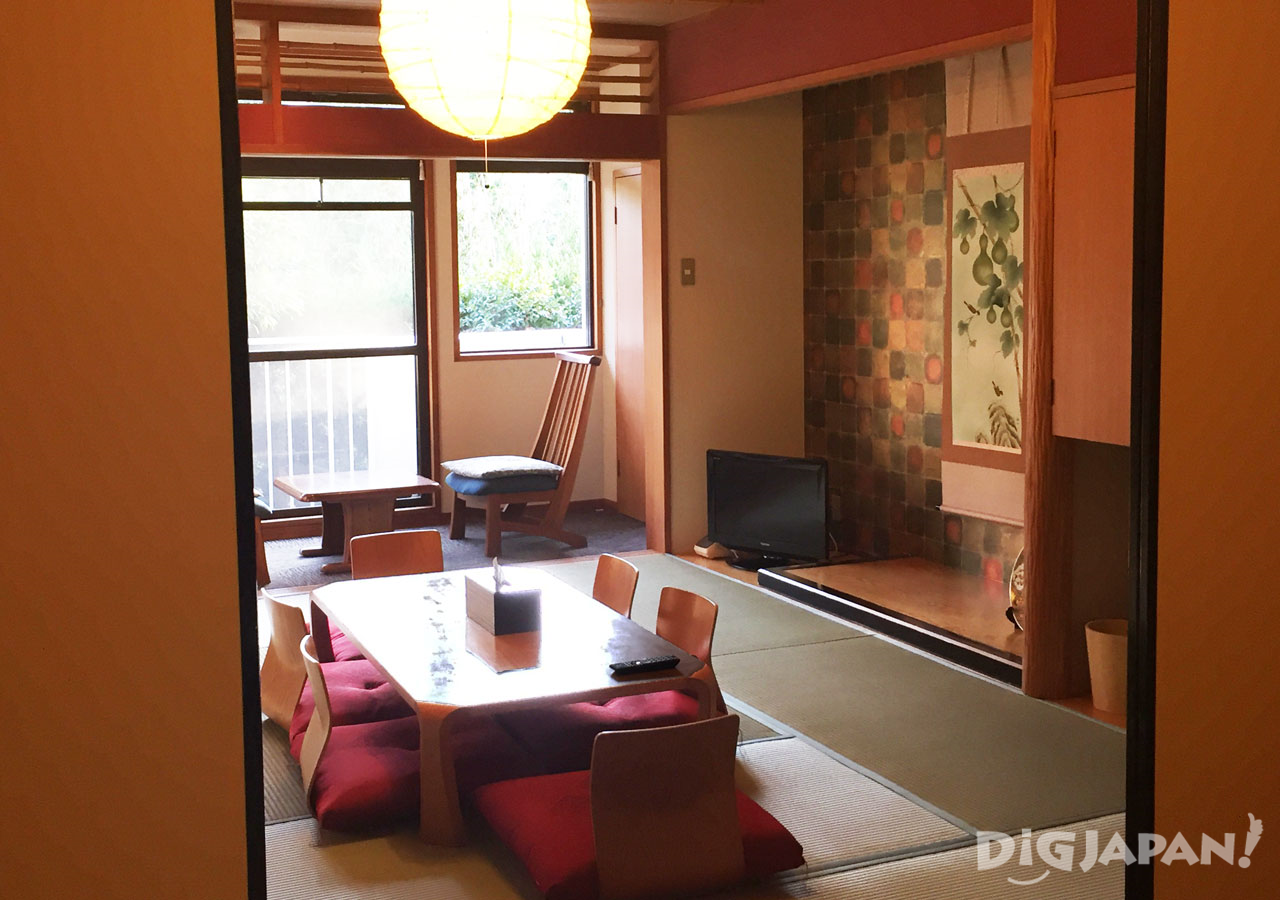 Room 106 has a gourd scroll hanging in the special alcove called a tokonoma.

There are eight tatami mat rooms that sleep four people and three that sleep six. Staying in one of these rooms, you get pretty much the same experience as you would in a more traditional ryokan. You’ll sleep on futons on a floor covered with tatami mats, which is the main point that seperates a ryokan from a hotel in my opinion. The rooms are spacious and have all the furnishings you could need, including an en-suite bathroom. 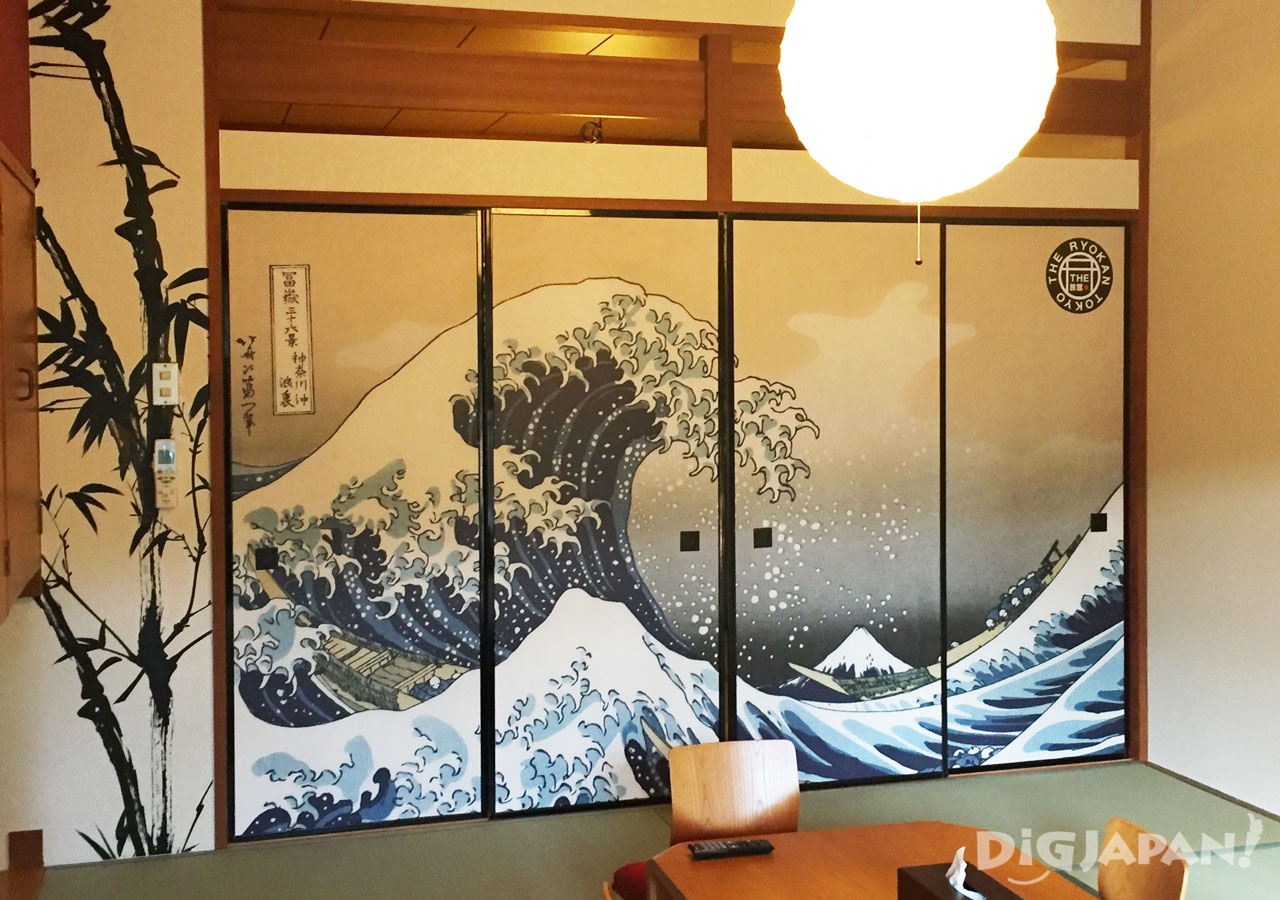 The six-person tatami mat room has two ukiyo-e shoji screens. The ukiyo-e in the main sitting area of room 106 is the famous The Great Wave by Hokusai.

One noteworthy point of the tatami mat rooms is that each one has a different famous ukiyo-e painting printed on the sliding shoji screens. 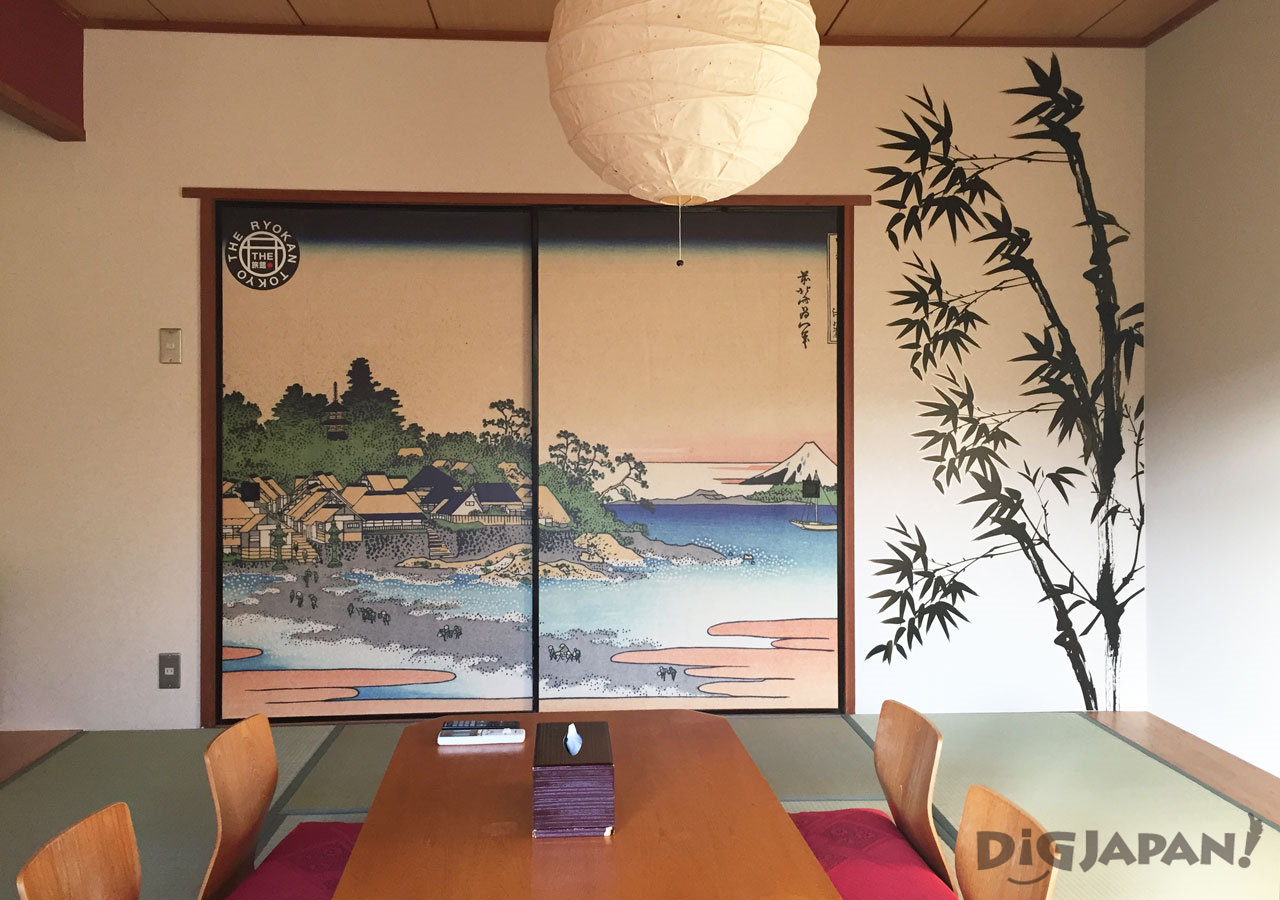 An example of a four-person tatami mat room. The ukiyo-e in room number 204 is titled Enoshima in Sagami Province and is part of the series Thirty-six Views of Mount Fuji by Hokusai.
​
The only thing missing from the experience is kaiseki dining, but you can grab that for lunch or dinner while exploring Hakone. And instead of kaiseki for breakfast, you can try making your own onigiri at the onigiri breakfast buffet! 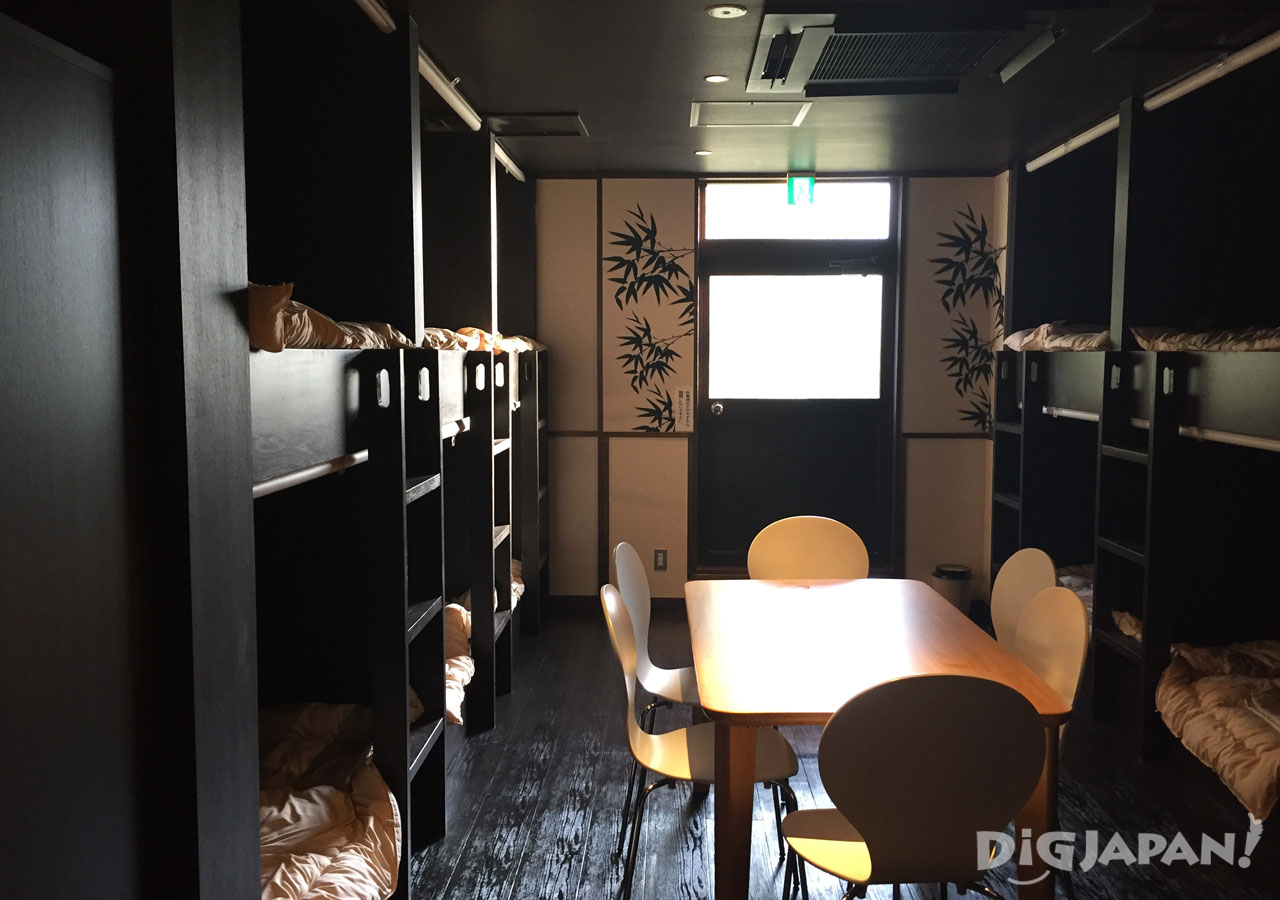 Inside the dormitory space.

I feel like they designed the dormitory space with travel bloggers in mind. There are fourteen semi-double (120 cm wide) beds built into the walls of the dormitory space. Each bed has a curtain at the foot that can be pulled down for privacy. 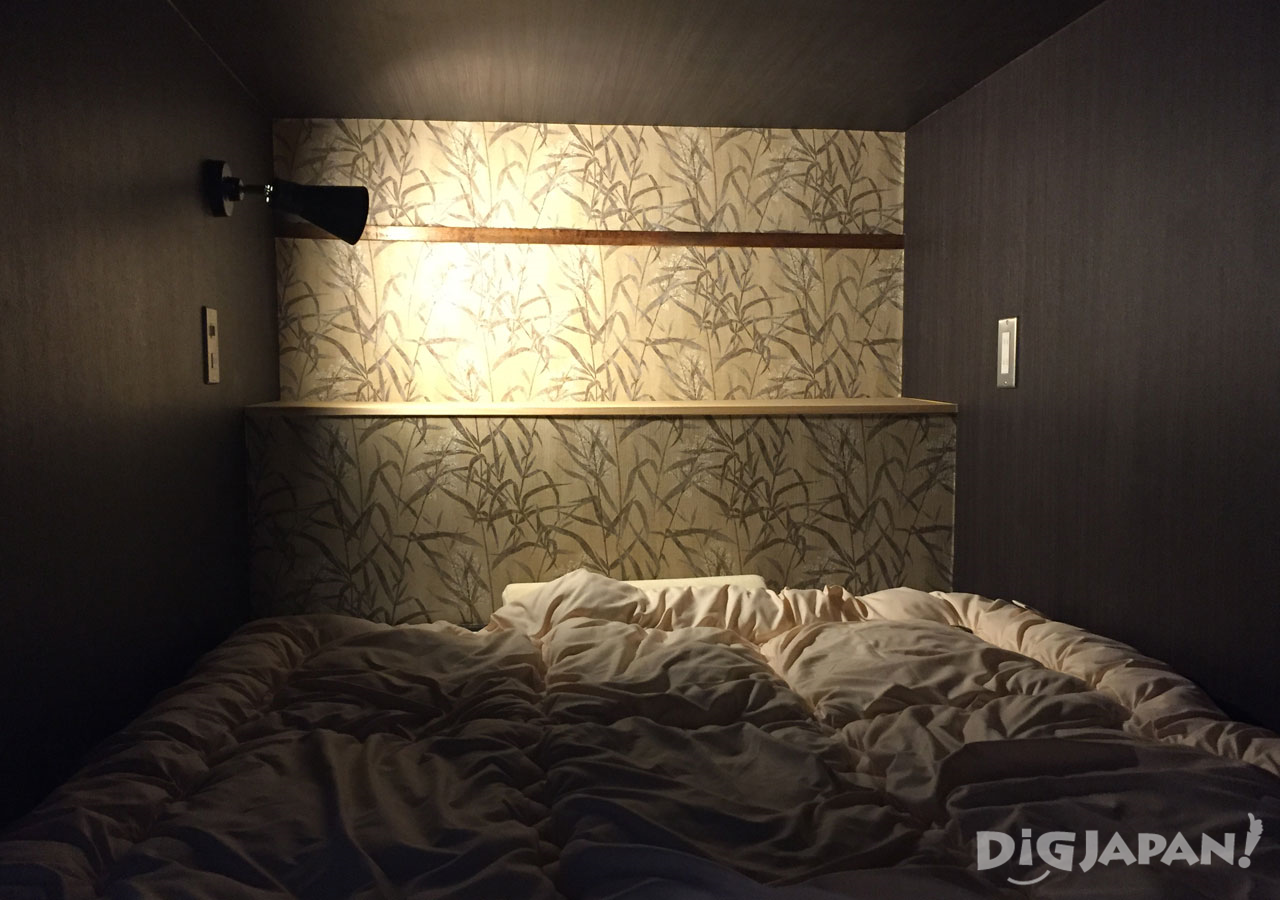 A comfy bed and a place to plug your charger. What more could you ask for?
The best part of the bunk space, though, is that there is a shelf built at the head of the bed that has a light and two outlets. It’s a great little space to charge your phone and blog about your adventures in Japan, post pictures, and plan the rest of your itinerary. If you feel like being social, there’s a long table in the room where you can sit and chat with your fellow travelers. 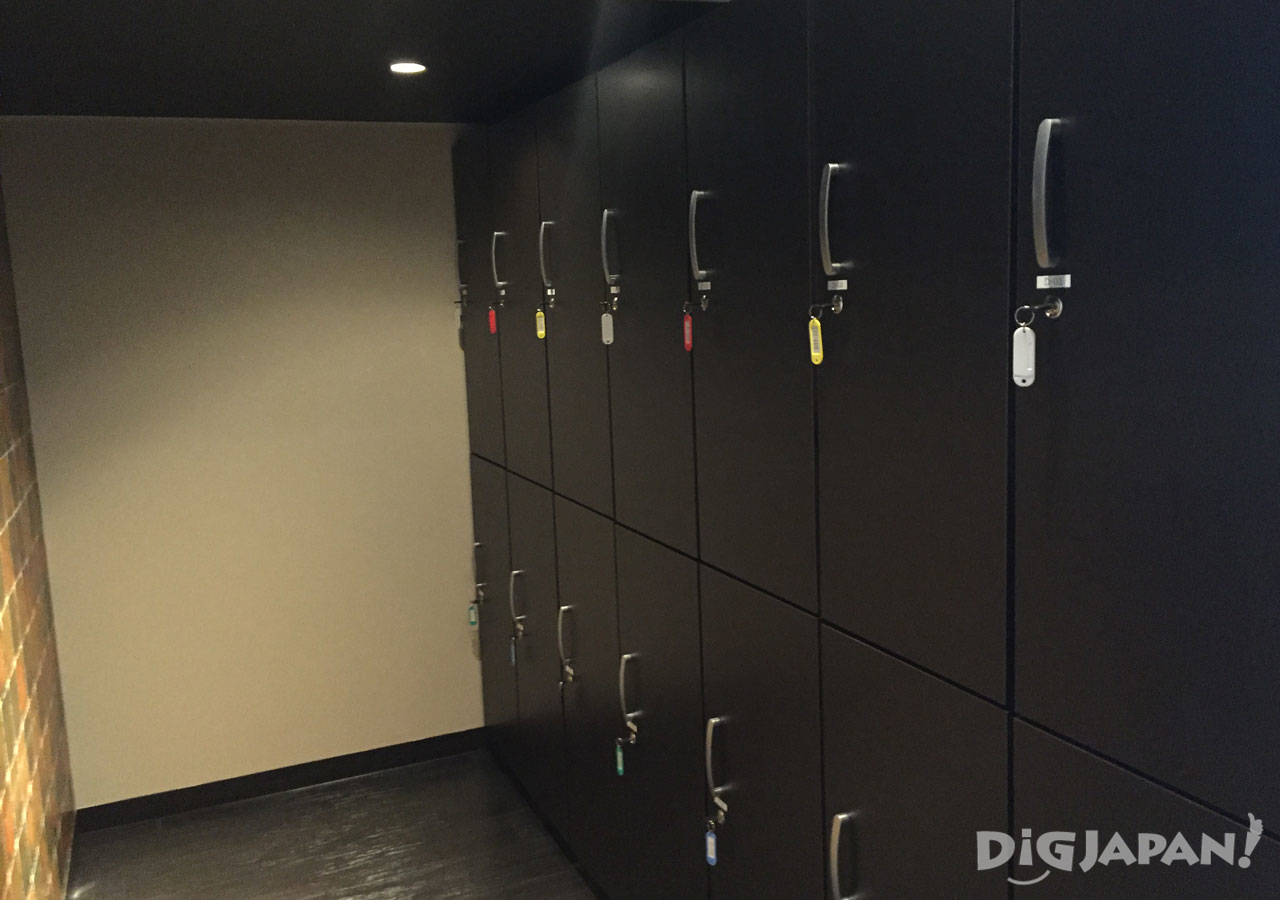 Peace of mind: there are lockers for your luggage right in the dormitory. 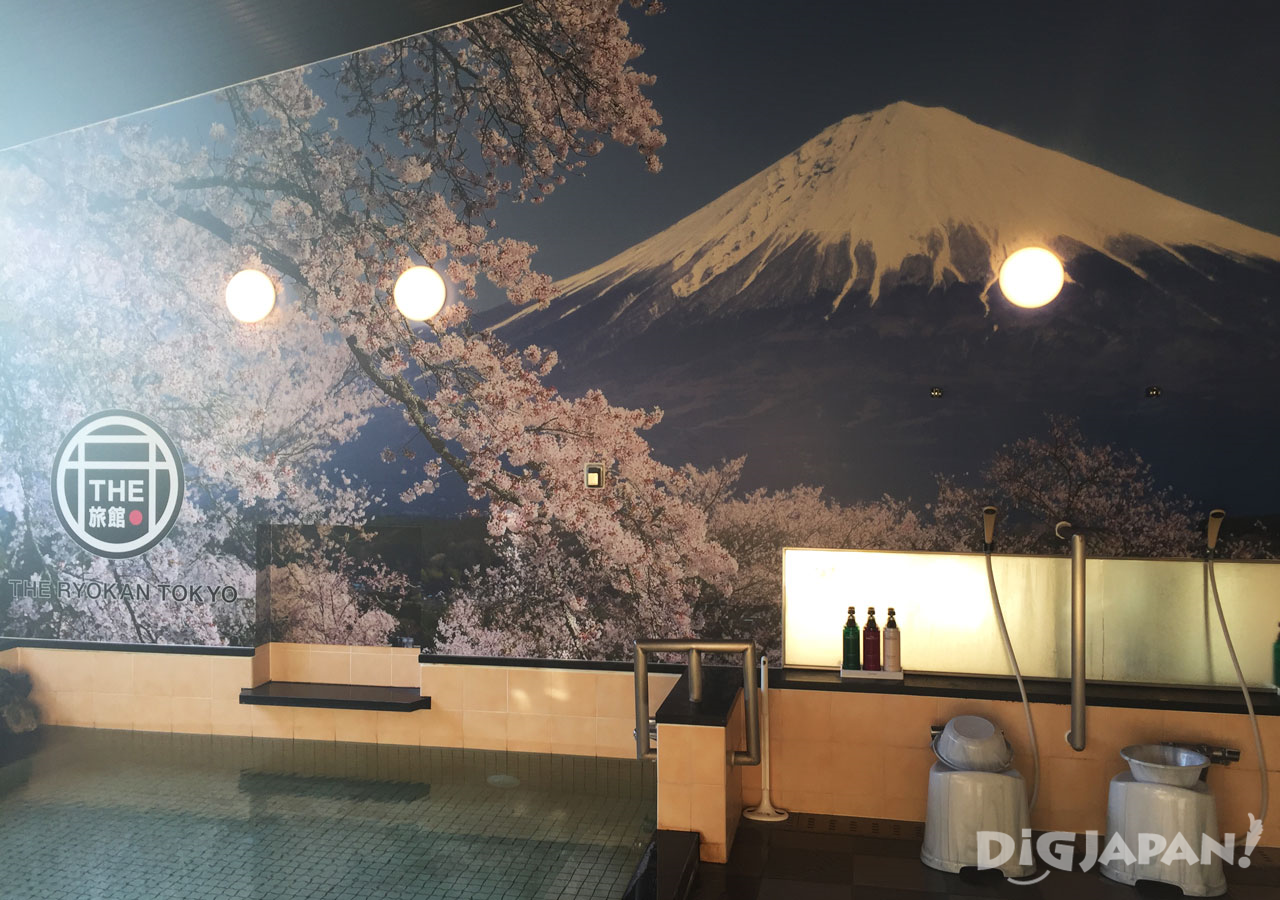 You can enjoy the image of Mt. Fuji in spring as you soak in the tub. The awesome thing? You can get a great view of the real thing in Hakone!
Like any good ryokan, there are onsen at The Ryokan Tokyo. There are two baths, one for men and one for women. The men's bath is indicated by a blue flag hanging in front of the door and the women's by a red. As with any onsen, you'll undress in the changing room and wash up before getting into the big bath. The water is pumped in from a nearby natural hot spring, so you can enjoy a luxurious soak. Use of the onsen is not included in the price of your stay, so you'll need to pay a nominal fee. 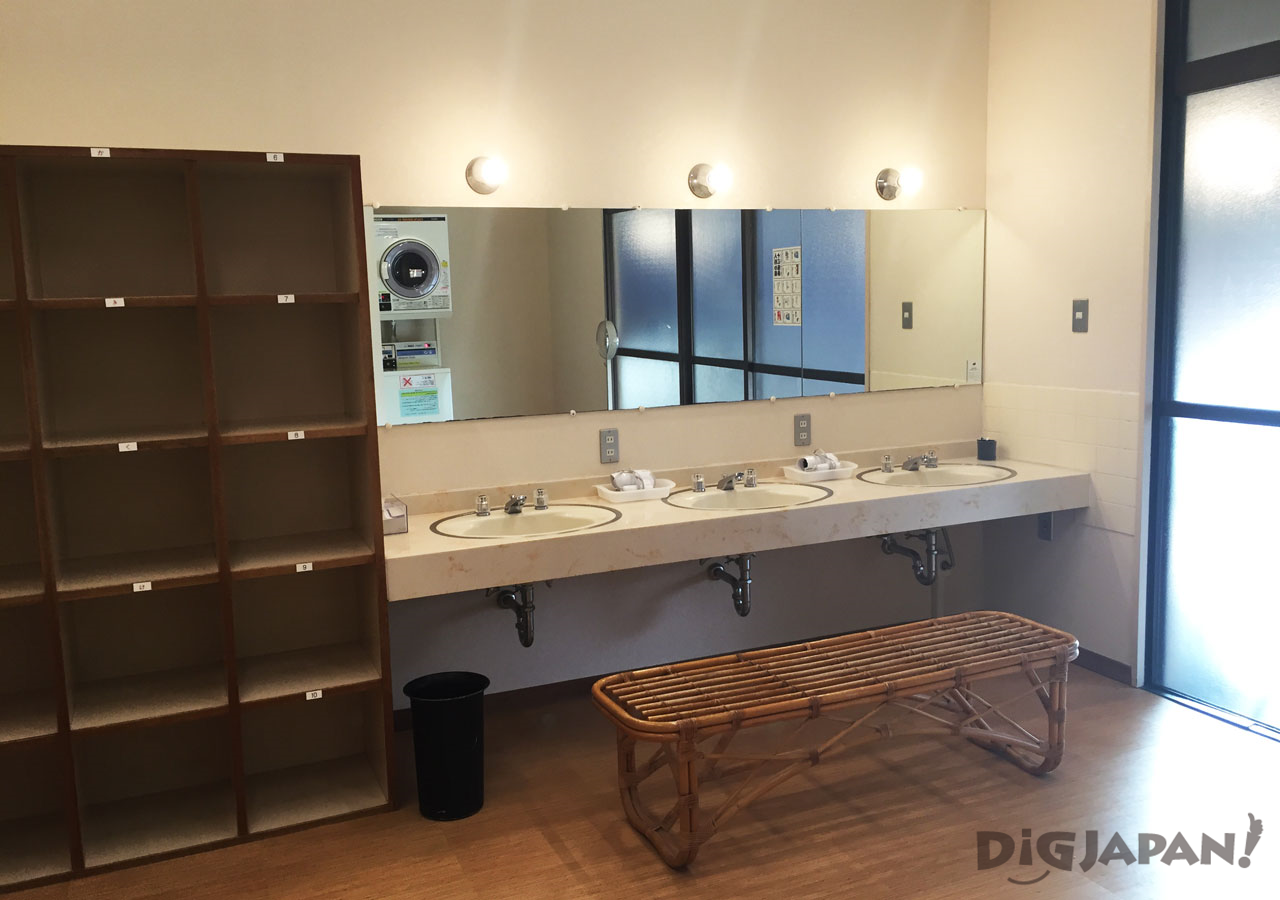 The changing room in the onsen. Stash your stuff in a cubby and go take a dip!
There's also a coin washer and dryer in both the men's and women's changing rooms. This is perfect for those doing an extended trip who need a chance to catch up on some laundry. 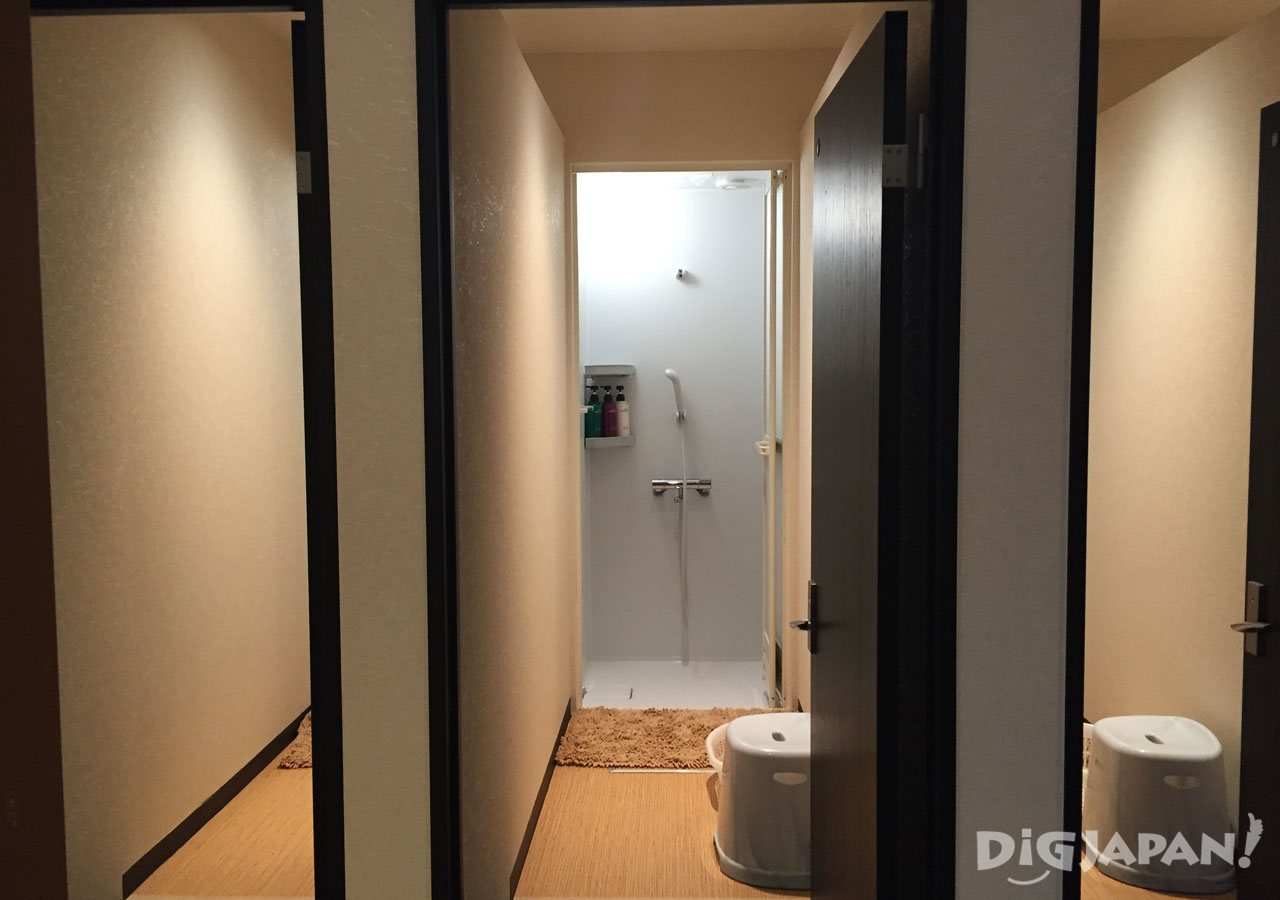 The shower rooms. Like the showers in the onsen, there are complimentary amenities.
If communal bathing isn't your thing or you're more of a quick morning shower type, there are four shower stalls available. Unlike the onsen, these are free of charge. 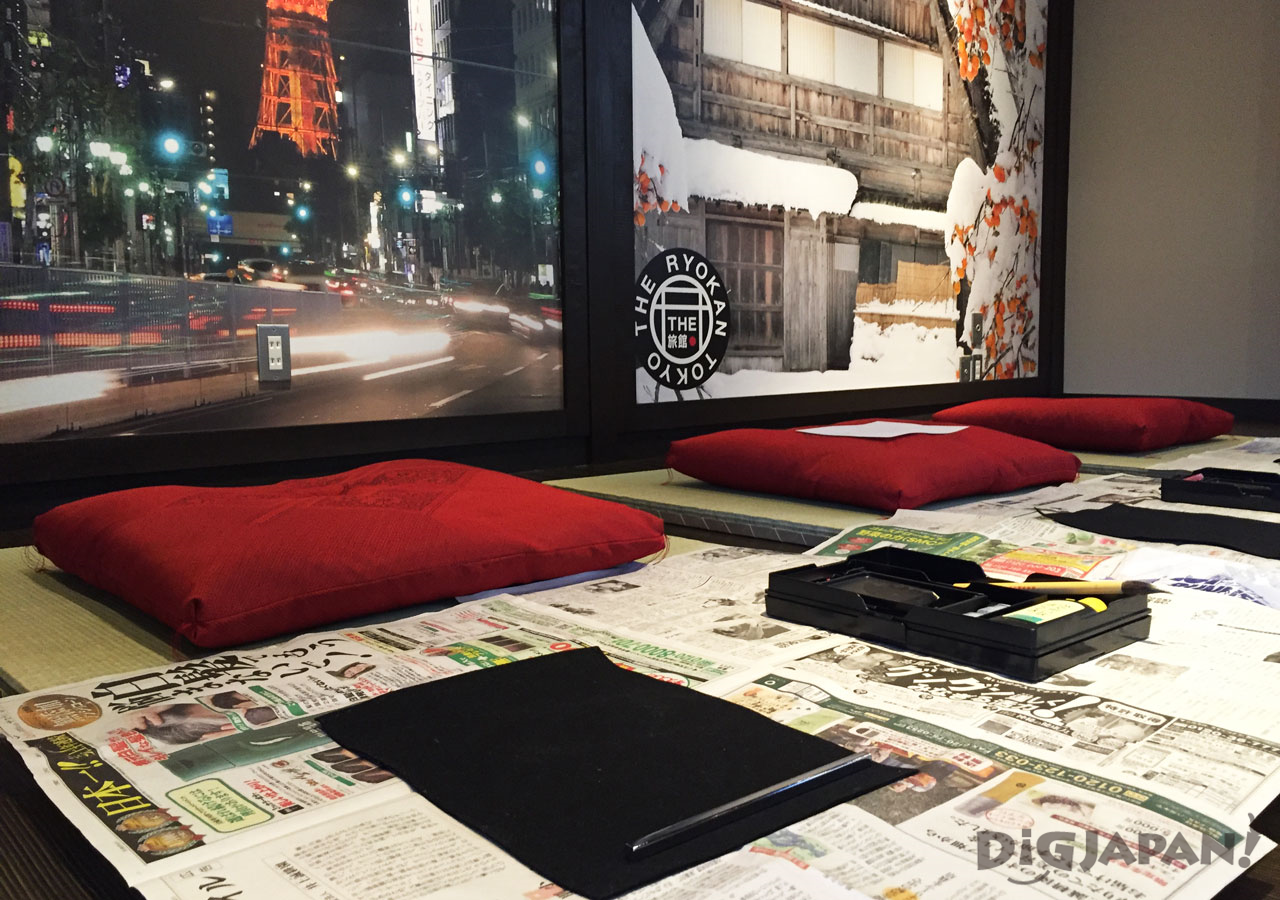 Supplies laid out for a calligraphy workshop. Can you tell what famous landmarks are in the pictures on the walls? 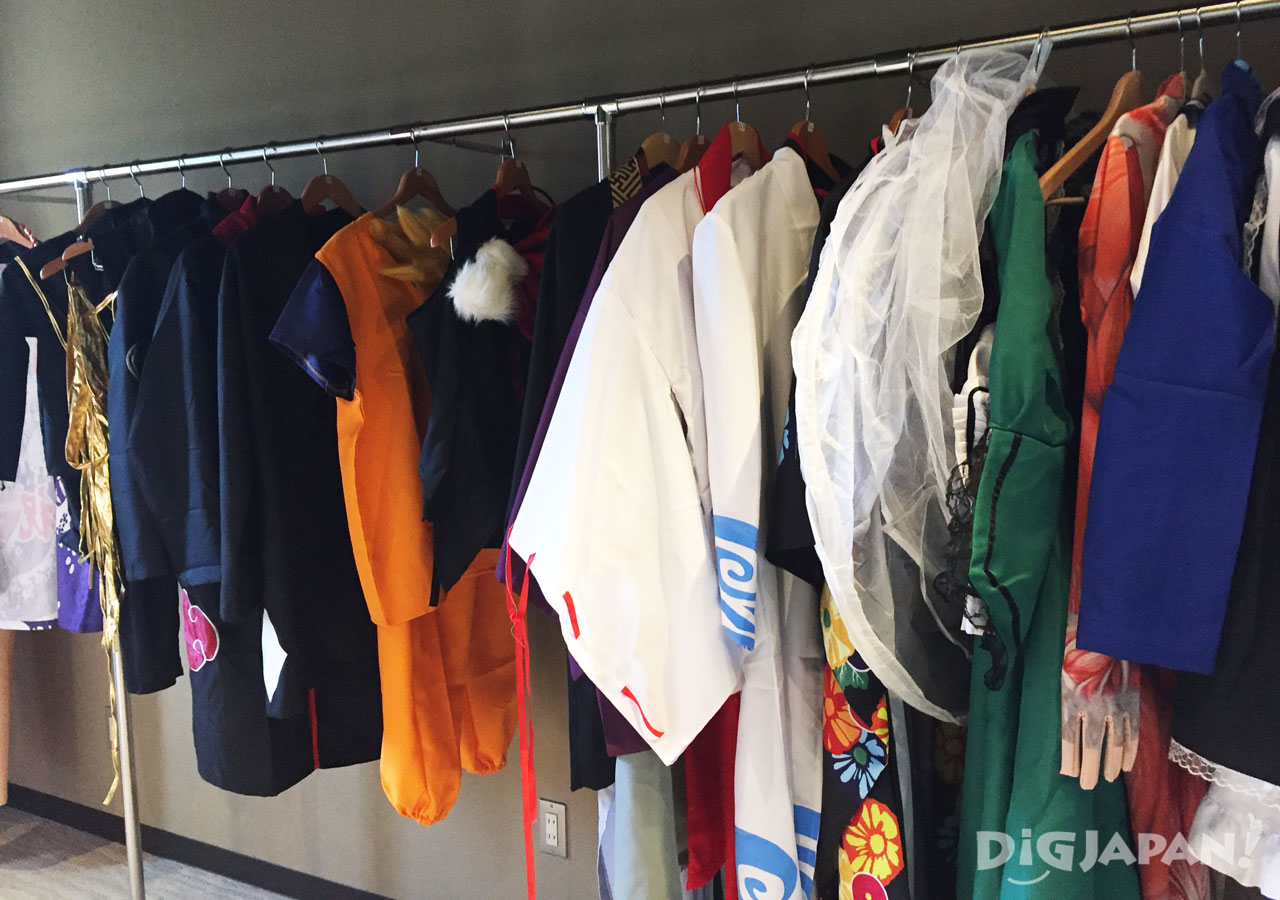 These are some of the costumes available for the cosplay experience. Can you recognize any of the characters?
I tried playing with a Japanese spinning top called a koma, which involves wrapping a cord around it and throwing it just so. My first try was a bit of a flop, but I nailed it on the second one! It was a surprisingly satisfying accomplishment.

Success!
If you’re looking to relax with a drink, they have a bar where you can sample different types of sake. Stop by for a nice finish to your day. 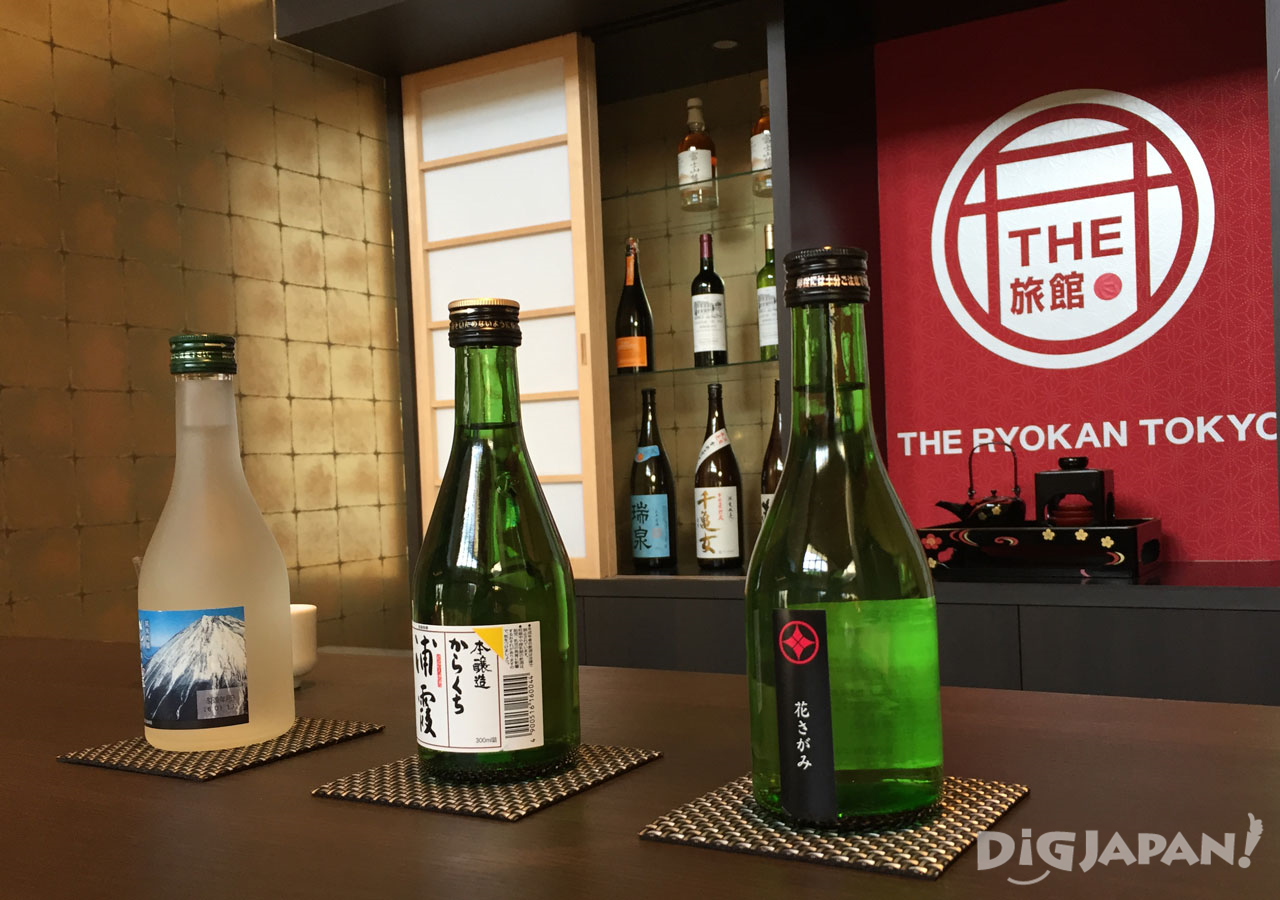 You can try different types of sake at the five-seat bar near the dining area.
Because of its prime location on the “golden route,” The Ryokan Tokyo is a good base camp for travelers bound for locations like Hakone, Atami, and Mt. Fuji.

The facility is located close to Yugawara Station, which is only about a twenty minute train ride from Odawara Station. From this station, you can take advantage of a Hakone Free Pass, which gives you unlimited access to all transportation in the Hakone area for two or three days.

What’s more, The Ryokan Tokyo is also a cool destination in and of itself with its over-the-top Japanese-style. Check their website for information on how to reserve your room. 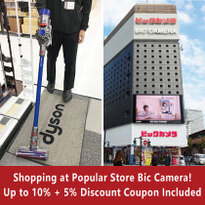