AnimeJapan, the world's biggest anime event, took place this year on March 26 and 27 at the Tokyo Big Sight. 135,323 people came this year (a 111% increase from last!) to check out the latest in anime, games, exhibitions, cosplay, and more.

One exhibition staged at this year's AnimeJapan was a unique collaboration between several popular anime and game series and the famous folk crafts of different regions of Japan. The theme of this collaboration was “Tradition and Anime in our daily life.” The result was an array of practical goods that combined the beauty of Japanese craftsmanship with the fun and excitement of today’s popular media.

Here are a few of the pieces that were on display during the event. 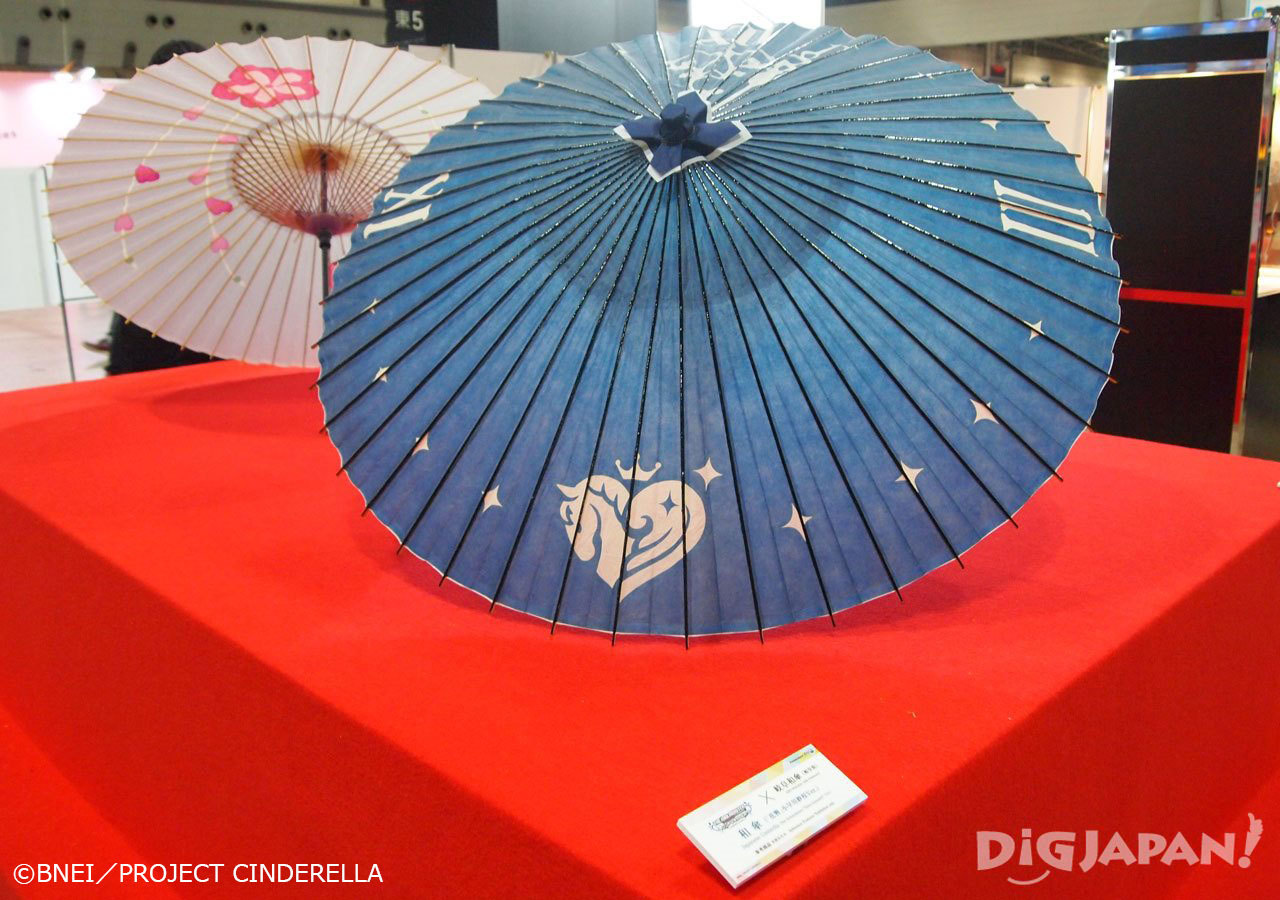 Perhaps best known as the home of the UNESCO World Heritage Site Shirakawa-go, Gifu Prefecture has been famous for wagasa or Japanese paper umbrellas since the Edo Period. These gorgeous umbrellas are produced mainly in Gifu City. Their multi-step construction process is considered to be one of the most complicated of any traditional Japanese craft. To this day most of the production work is still done by hand.

The designs for these umbrellas were inspired by THE IDOLM@STER CINDERELLA GIRLS, a game developed for mobile phones. The blue wagasa has a design of 14 stars, representing the 14 main characters of the game. The pink wagasa has a design of a hana kanzashi, a type of traditional hair accessory. It was designed to look good on a character in the game who wears a kimono. 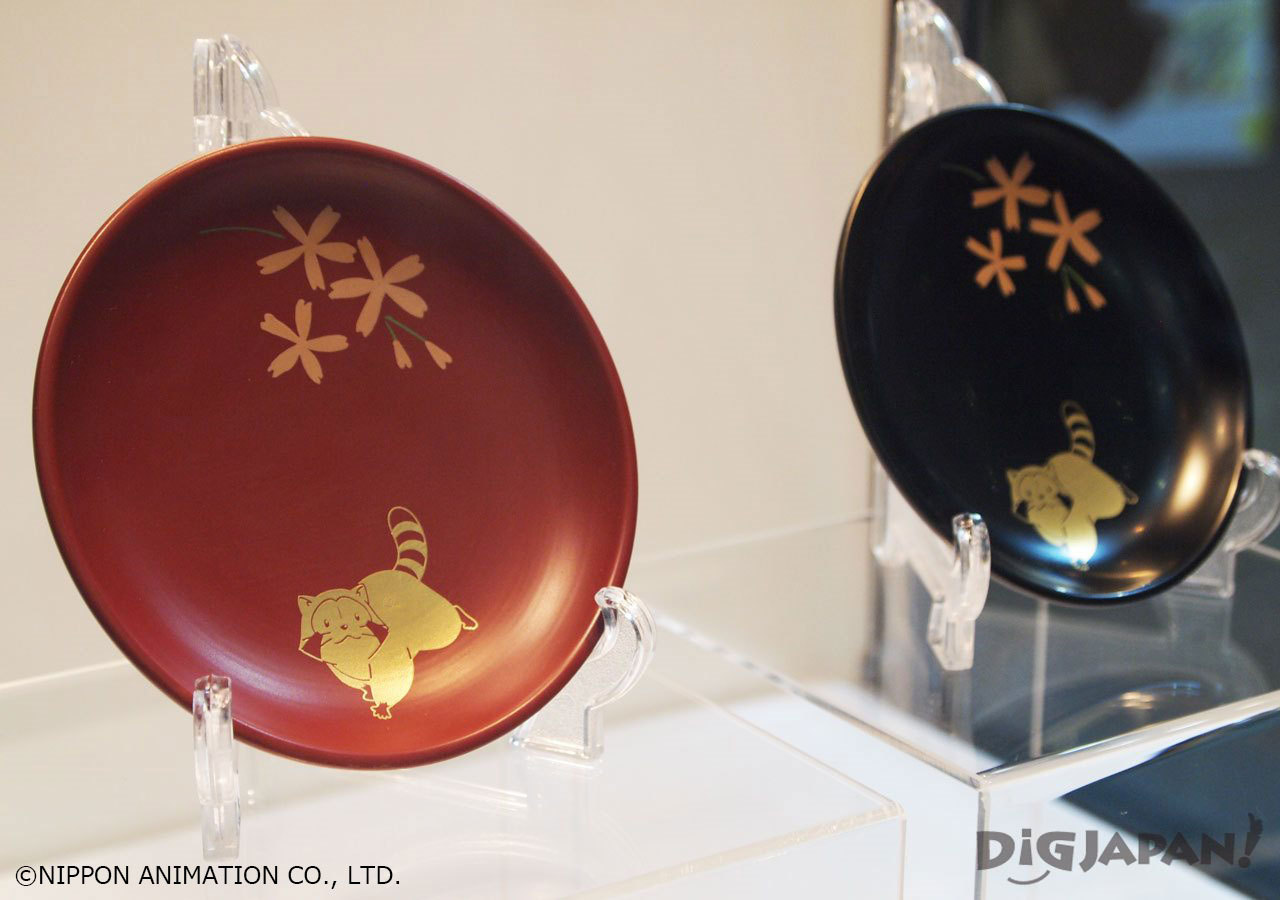 Techniques for making lacquerware or shikki were imported to Japan from China and Thailand in the later part of the Edo Period. Japanese methods were incorporated, and a uniquely Japanese handicraft was born. Of particular fame was an artist named Tamakaji Zokoku who worked in Kagawa. The five lacquerware techniques that he created are still used today.

This elegant handicraft is paired with Rascal, the adorable raccoon character from the anime Araiguma Rasukaru (Rascal the Raccoon). Although this anime aired in 1977, it remains popular today thanks to Rascal’s appearances on social media and in various products. 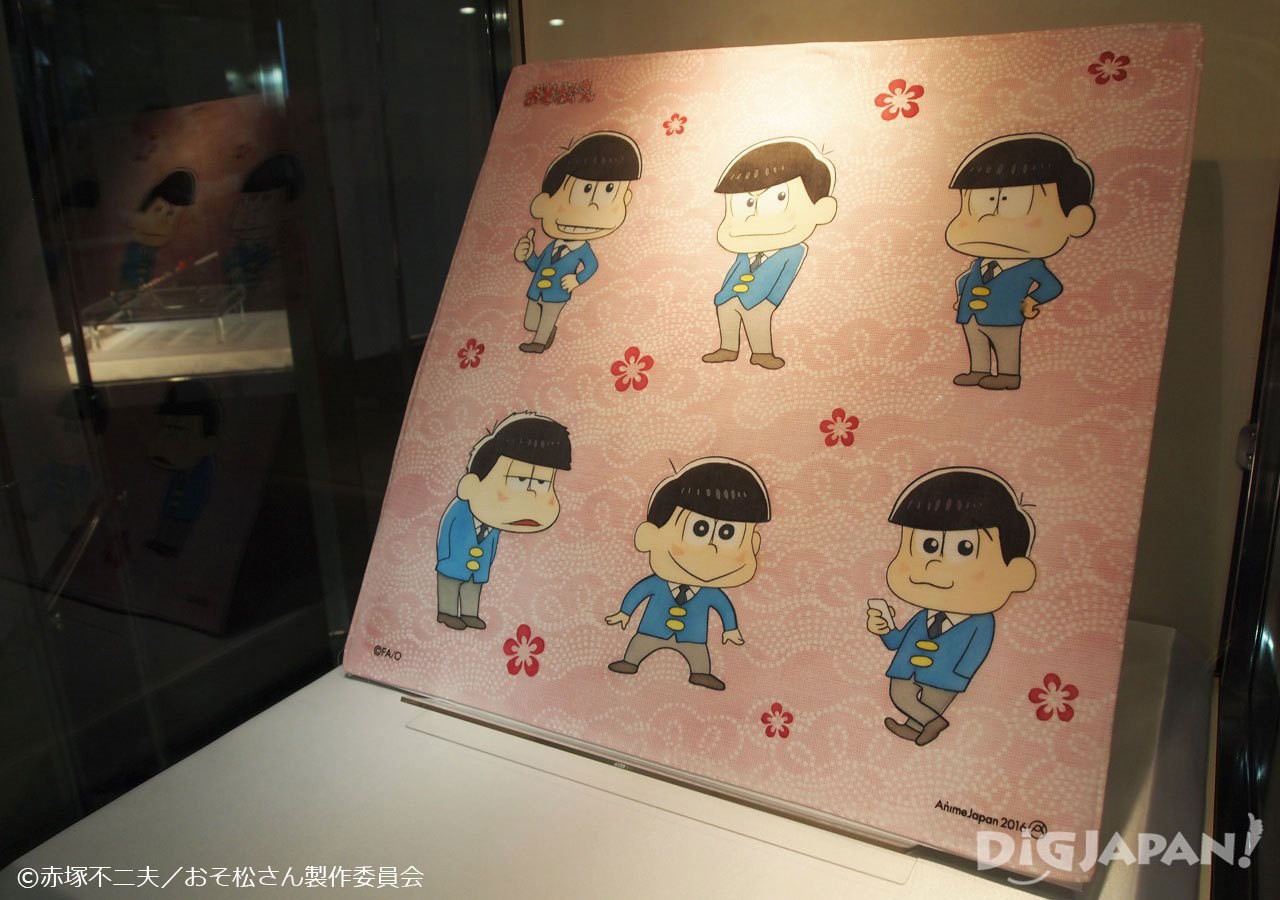 The dying technique called kyo-yuzen is a multi-step process that relies on the use of stencils. This technique can be used to produce both sharp lines and flowing color gradients. It was developed in Kyoto in the Genroku Period by the painter Miyazaki Yuzensai.

While the pattern of this kyo-yuzen handkerchief may look like the same character in different poses, they are actually a set of sextuplets from the recent anime series Mr. Osomatsu. 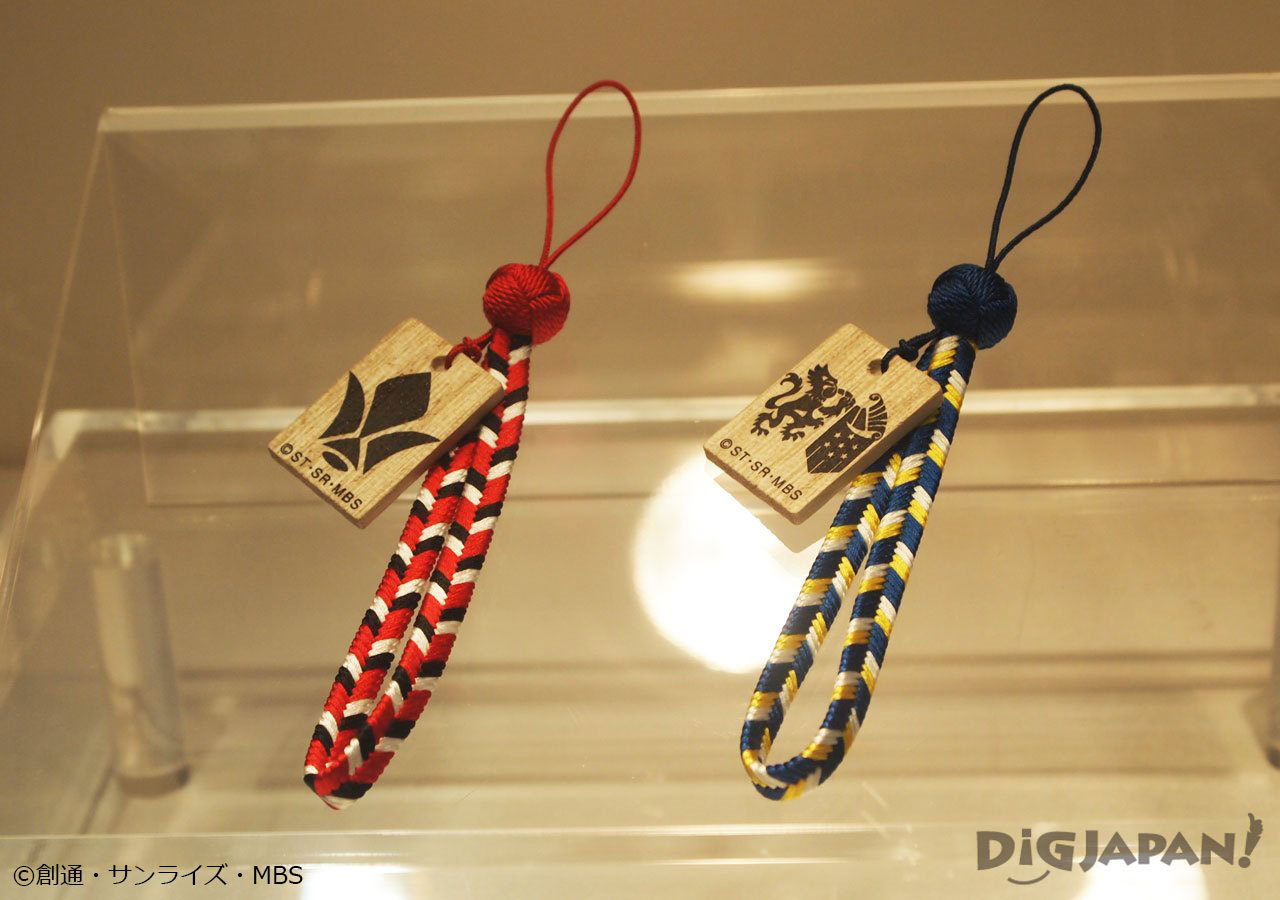 Another one of Kyoto’s fine handicrafts, kyo-kumihimo cords have been around since the Heian Period. They were once used for a variety of purposes both artistic and practical from obijime cords used to secure the obi of kimono to those used on the sheathes of katana.

This ancient craft now finds a new purpose as cell phone charms in the colors of the security company Tekkadan (red) and the military organization Gjallarhorn (blue) from the series MOBILE SUIT GUNDAM IRON-BLOODED ORPHANS. 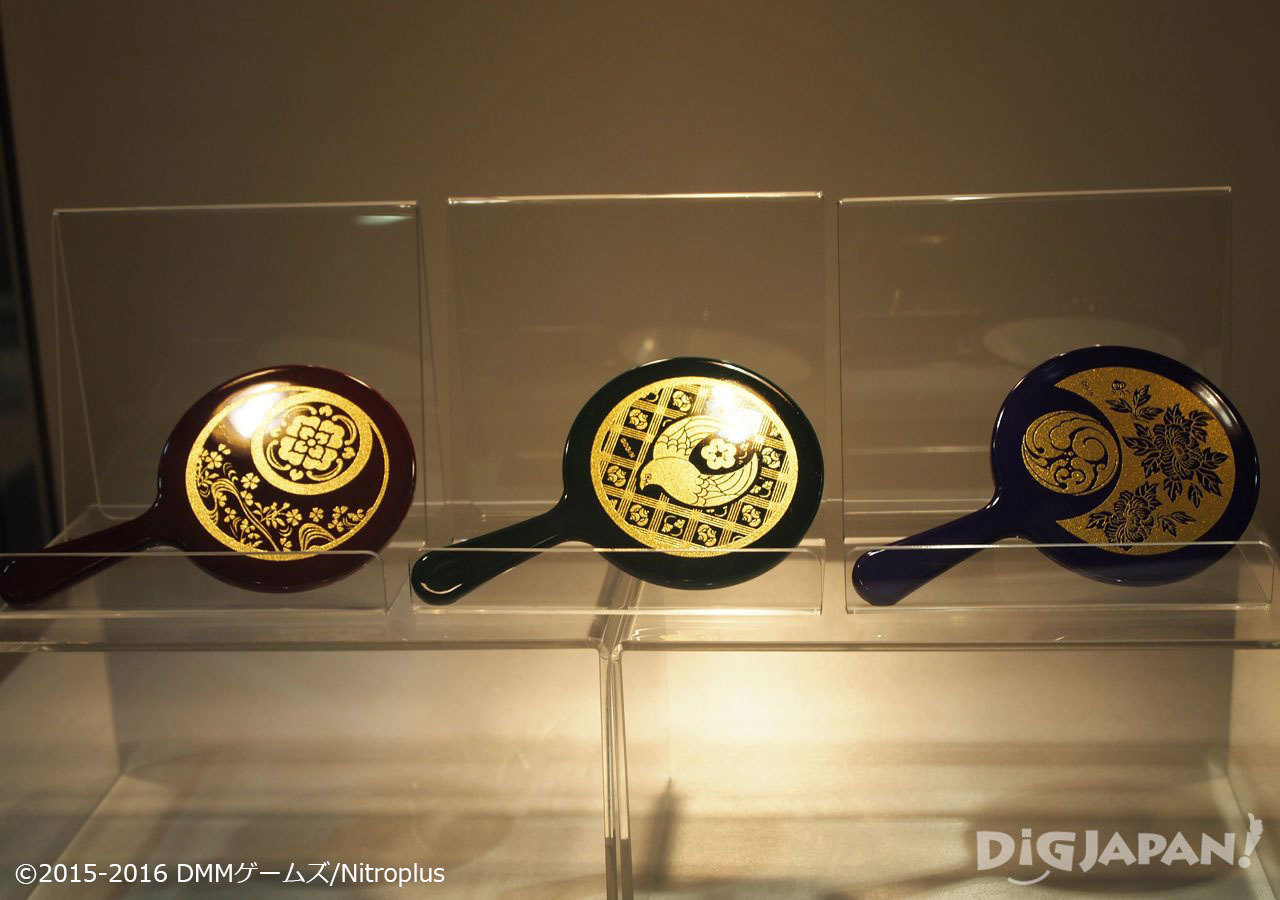 What separates the tamamushi-nuri style of lacquerware from others is the use of silver powder between the base and top coats of lacquer. This gives the piece an iridescent shimmer that is said to resemble the wings of a tamamushi, or a jewel beetle.

Adorning these jewel toned mirrors are golden crests of some of the Touken Danshi (sword warriors) from the online game Touken Ranbu-ONLINE.

While unfortunately these items were only on sale during AnimeJapan 2016, you can always pay a visit to the different prefectures mentioned above and learn more about the world of Japanese handicrafts!

Check out all the items that were on display here: http://anime-japan.jp/en/main/showcase/

The date for AnimeJapan 2017 has been set for March 25~26 at the Tokyo Big Sight! Check their official website for the latest information: https://www.anime-japan.jp/en/ 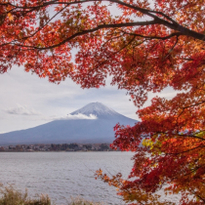