Inside Awa Odori: What It's Like
to Do One of Japan's Famous
Folk Dances

Awa Odori is a famous folk dance in Japan. It originated some four hundred years ago in Tokushima, a prefecture located on the island of Shikoku. A huge performance of the dance takes place the August 11 through 15. During this time, hundreds of dancers in bright costumes pretty much take over the city streets with their unique, energetic dance. There are also famous Awa Odori performances in Tokyo in Koenji and Kagurazaka. While considerably smaller in scale than the performance in Tokushima, they're still quite the spectacles!

But what is it like to do one of Japan’s most famous dances? To find out, I made my “debut” as an Awa Odori dancer with Takarabune, Japan’s only professional Awa Odori entertainment group, during a small festival in Tokyo. Read on to see what it’s like inside an Awa Odori group! 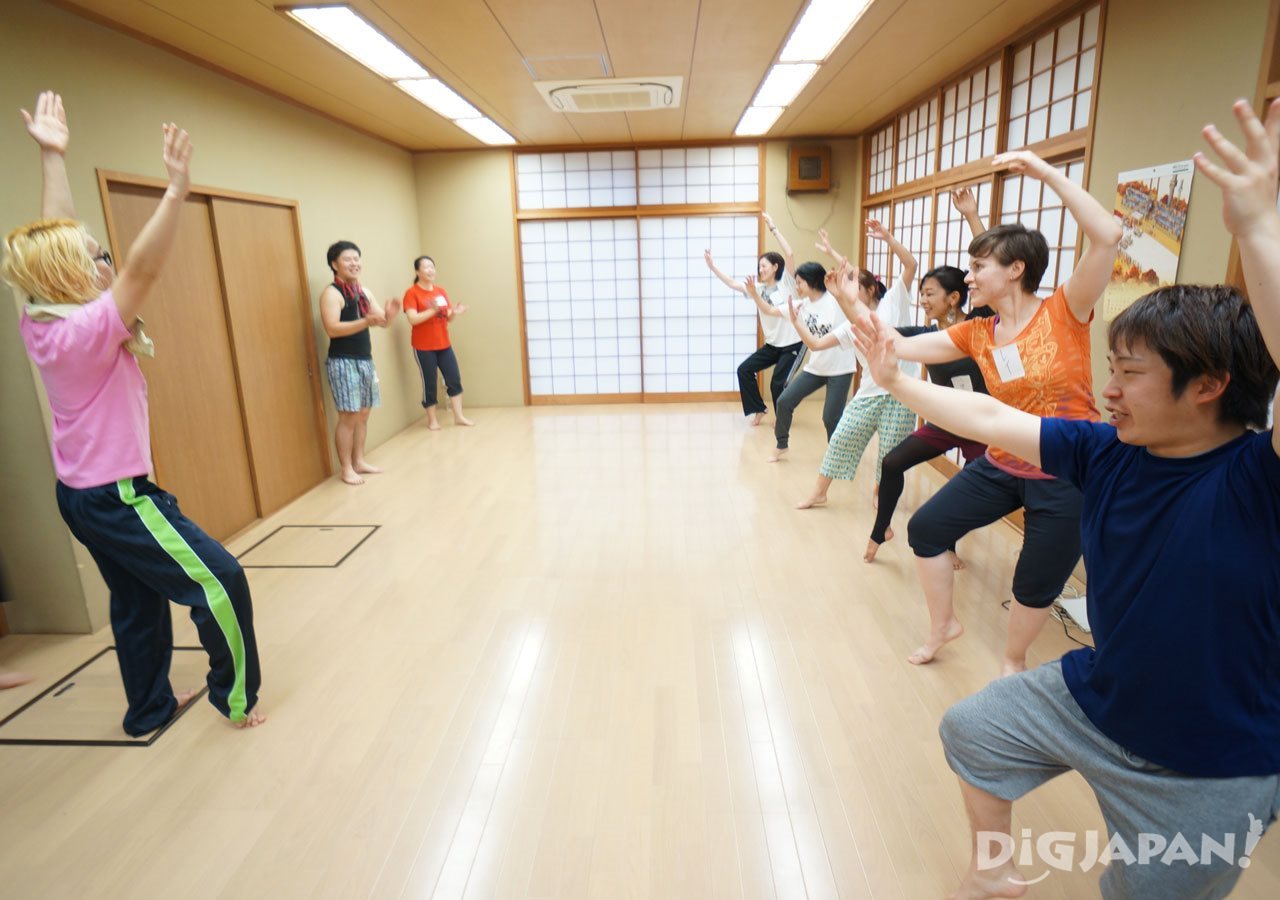 The dancers of Takarabune are mainly divided into two groups: the professional members and general members. These workshops are taught by the pro members, many of whom have been dancing Awa Odori for almost their entire lives.

If we dumb things way down, the basic step of this dance is a step-return pattern alternating between your right and left feet. Your arms move in synch with your feet, so your right arm is forward when your right foot is and visa versa. 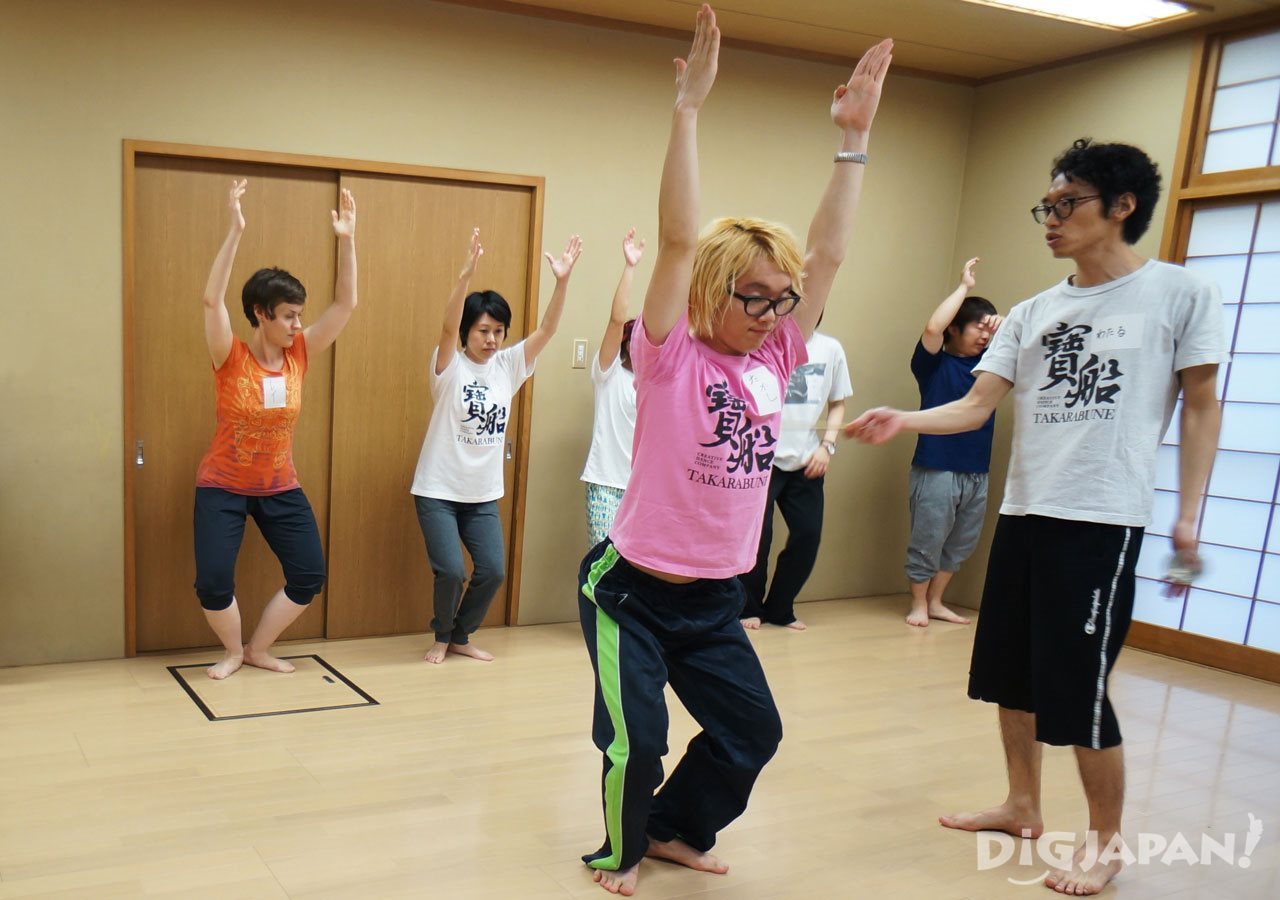 We work on getting into the correct basic position for the dance, which happens to be a squat. Fun!
Of course as with most things in life, in reality it's not nearly so simple. There are actually several styles of Awa Odori. Some are typically danced by women and others by men. Everyone in Takarabune dances a particularly energetic variation of a male style. I quickly learned that this dance requires a lot of stamina and practice in order to make it look good. You’re always jumping around in a squatting position while balancing on one leg or the other. I was definitely feeling it in my thighs the next day.

I think Takarabune would do killer business if they started marketing their lessons as strength training classes. Forget squats. Do Awa Odori! 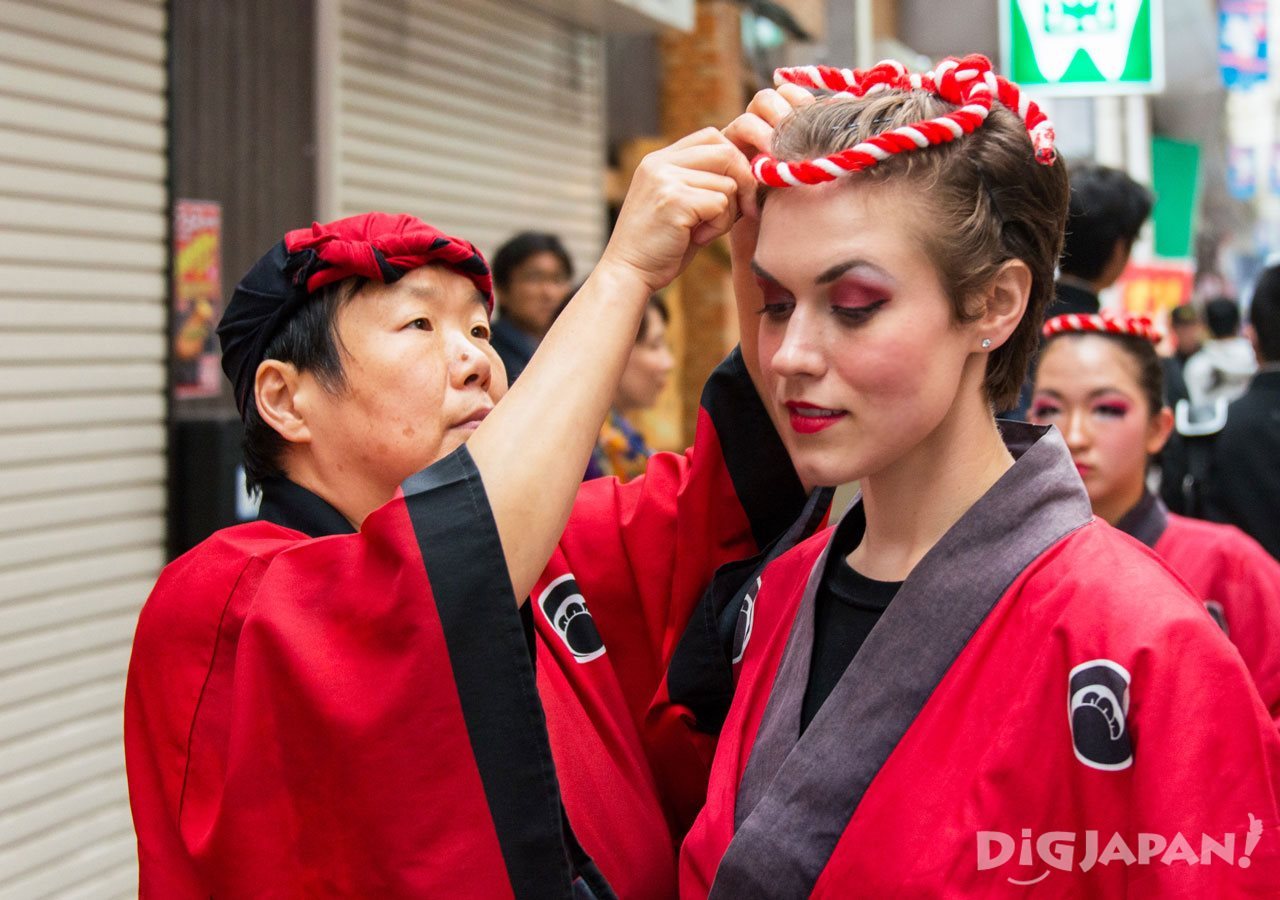 Getting my hachimaki adjusted by a pro.
After a grand total of three lessons, I made my debut as a member of Takarabune at a festival in Kameari, an area located in the northern part of Tokyo. As with most festivals, the event was held outside. And as luck would have it, it rained on the day of the festival. But rain or shine, the show would go on! We were relocated from where we had planned to perform outside to a covered shopping arcade about a block away.

Before the festival, the members of Takarabune did their hair and makeup and got into costume. Because the group does a male style of the dance, they wear a male version of the costume. Over black tank tops and spats, we wear a kind of coat called a happi that is tied with a obi. The knot we use is called a kai musubi, a style that is usually used now for male kimono and yukata. On our feet we wear white jikatabi, split-toed socks with thick soles that are made to be worn without sandals. The male members wear red and black bandanas tied around their heads while the female members wear a twisted piece of cord called a hachimaki. 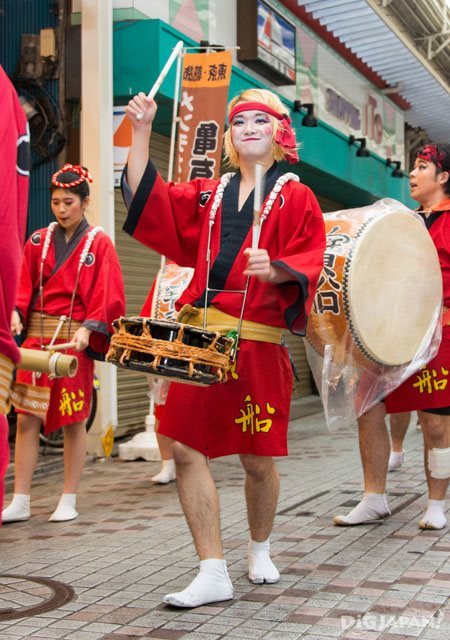 Some of the members accompany the other dancers playing various narimono.
At last it was time to begin! The main part of the performance was nagashi odori, or dancing down the street in a procession. The dancing was accompanied by musicians playing instruments that are collectively known as narimono. Typical narimono for Awa Odori include large drums called odaiko, smaller snare-like drums called shimedaiko, bells, flutes, and shamisen. 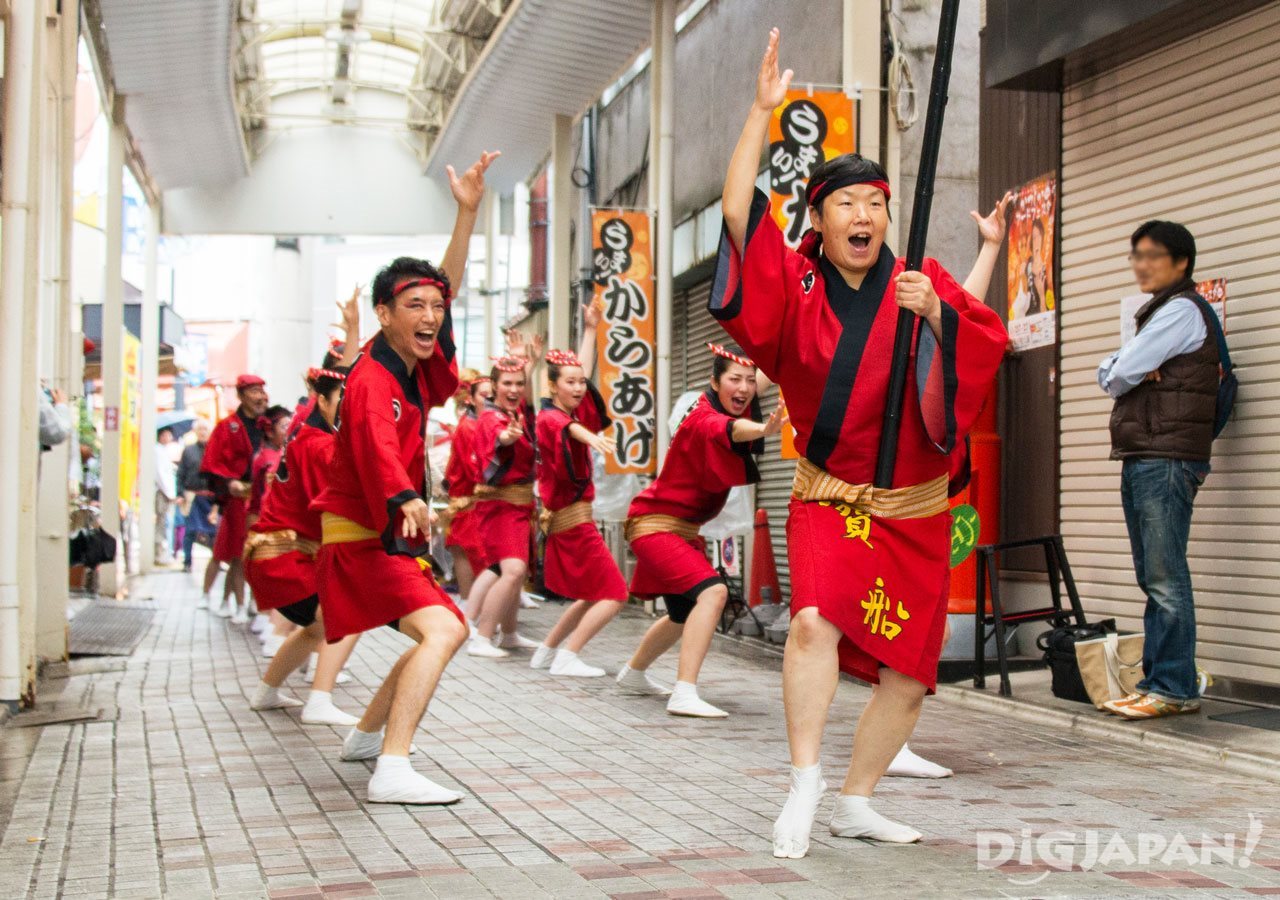 We call out to each other as we dance down the street in two rows.
In addition to those instruments, the dancers also make a lot of noise. One of the most common things you’ll hear are the phrases “yatto sa?” and “a, yatto, yatto!” shouted call and response among the dancers. While there is some speculation about the origin of this phrase, the nuance it carries now in Awa Odori is something like “let’s do this!” Dancers use it to encourage each other. There are also other call and responses like “erai yaccha, erai yaccha," and "yoi, yoi, yoi, yoi," which are both really fun to say. 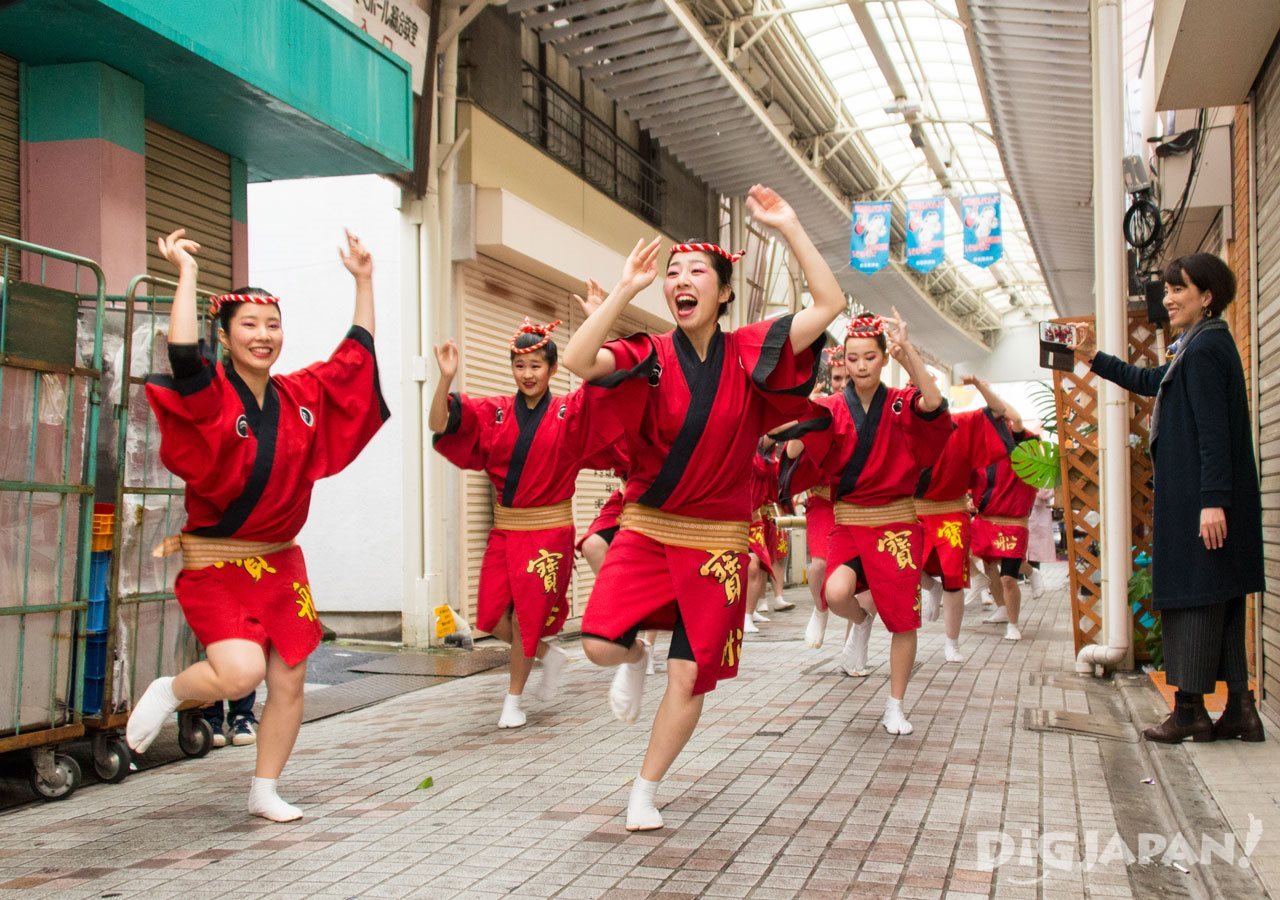 When the music gets faster, you give it all you've got!
When the music starts getting faster, that’s the cue to start dancing in place. It’s an opportunity for the dancers to show the crowd what they can do. At the end, they strike a pose with a dramatic shout of “sa!” The dancing begins again when the music starts. This is how we made our way down the street during the festival, starting and stopping, until we reached the end. 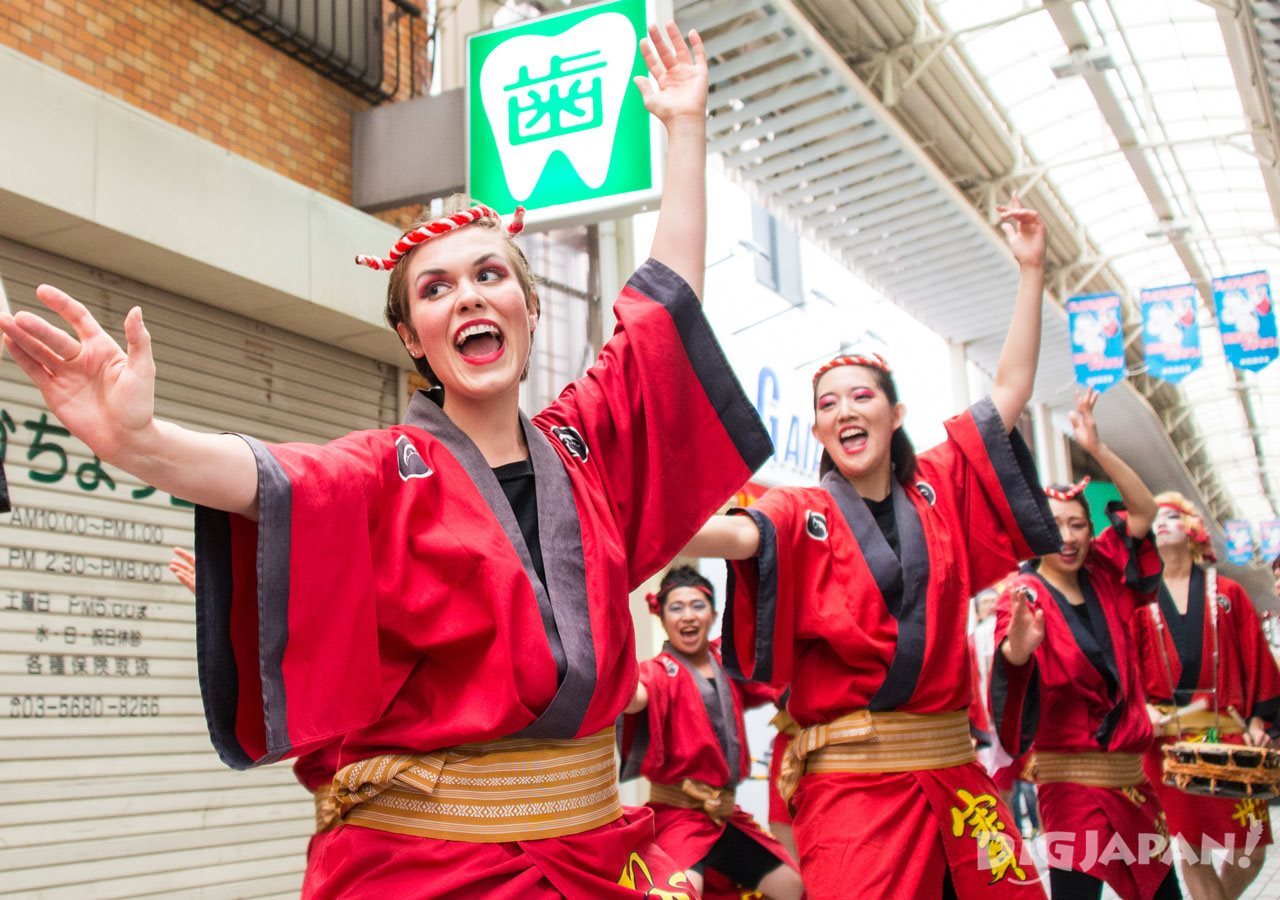 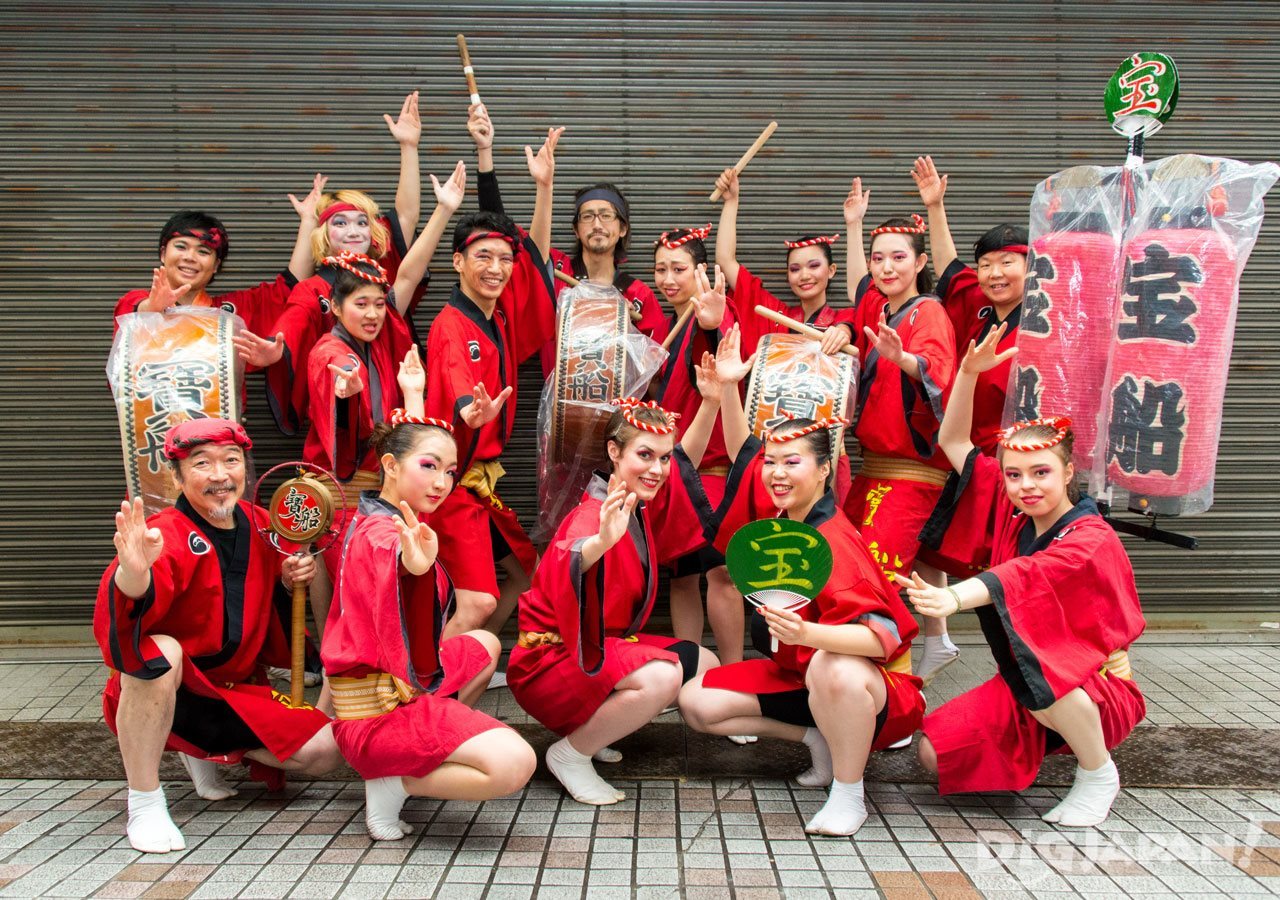 We take a group photo to celebrate a successful performance.
Before I knew it the festival had ended. Despite the rain, it was an amazing experience. Learning a folk dance, especially one as famous as Awa Odori, let me connect with an aspect of traditional Japanese culture that is alive and well in modern Japan. And by joining Takarabune, I was able to meet a group of incredibly tallented individuals who enthusiastically welcomed my participation. Takarabune is working hard to share Awa Odori with the world, so if you are interested in trying Awa Odori for yourself, check Takarabune's Facebook page for information about up-coming Super Workshops and other events!