Spring may have sakura and fall its foliage, but summer is the season for some of Japan's most incredible festivals. 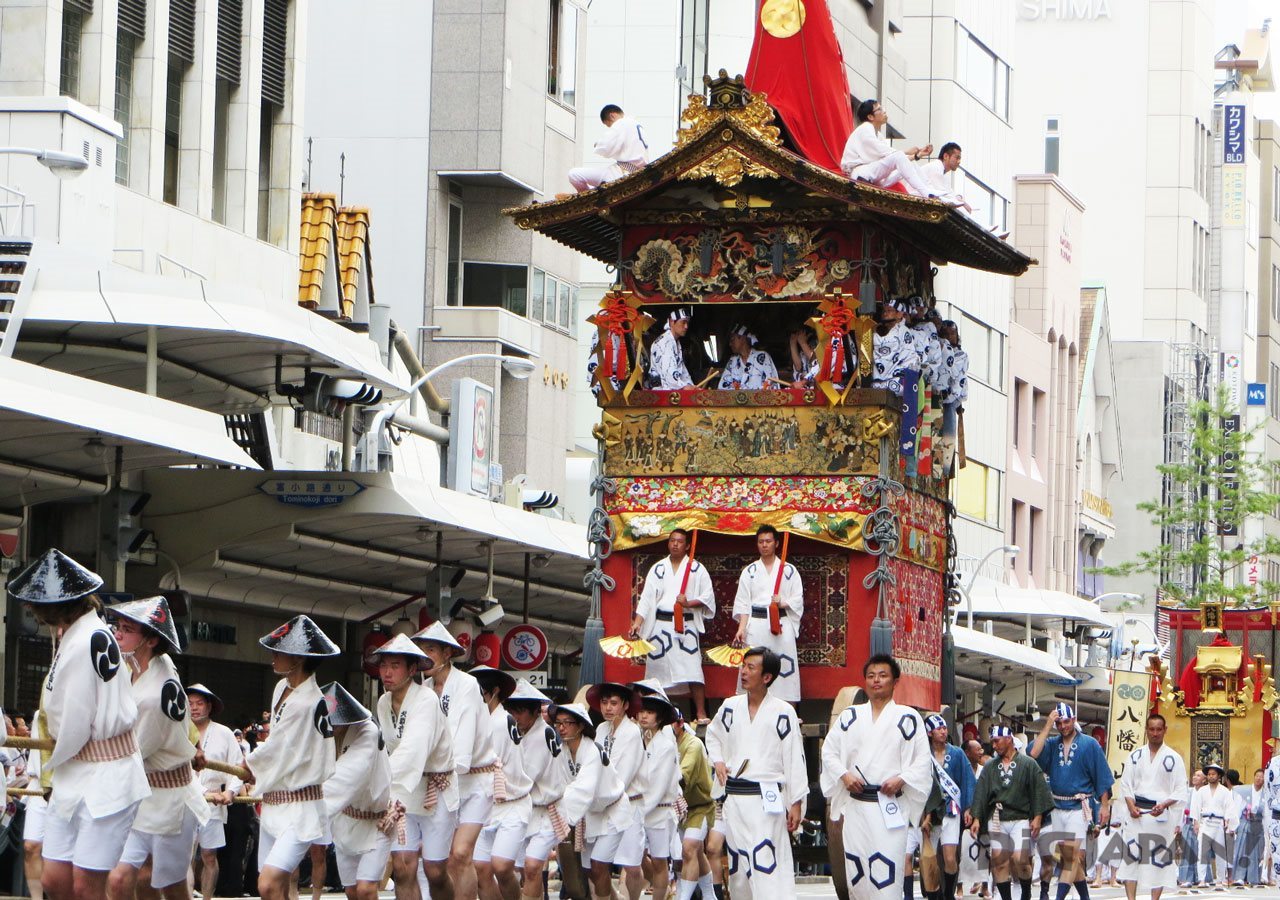 One of Japan’s three biggest festivals, Gion Matsuri spans the entire month of July with events happening nearly every day. The highlights of the festival are two parades called Yamaboko Junko. During these processions, two kinds of floats called yama and hoko (hence the name yamaboko) are pulled through the streets. The first and largest procession takes place on the 17th and features a total of twenty-three yama and hoko. The second and smaller procession is on the 24th and features the remaining ten floats. 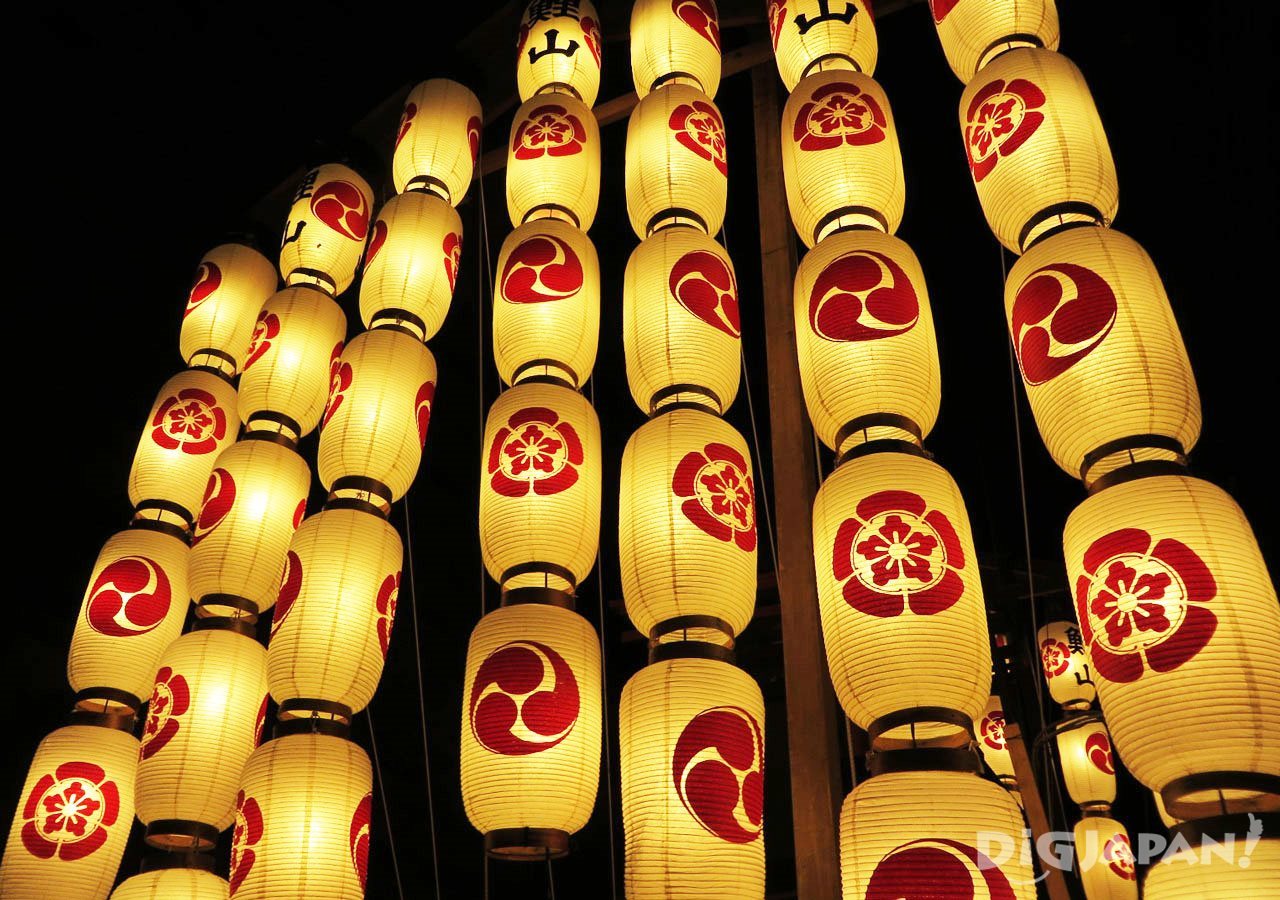 Stopping by during the evenings is also highly recommended, particularly during the Yoi-yama events when the floats are decorated and lit with lanterns. This event takes place nightly from July 14th to the 16th, but the first day is said to be the best. 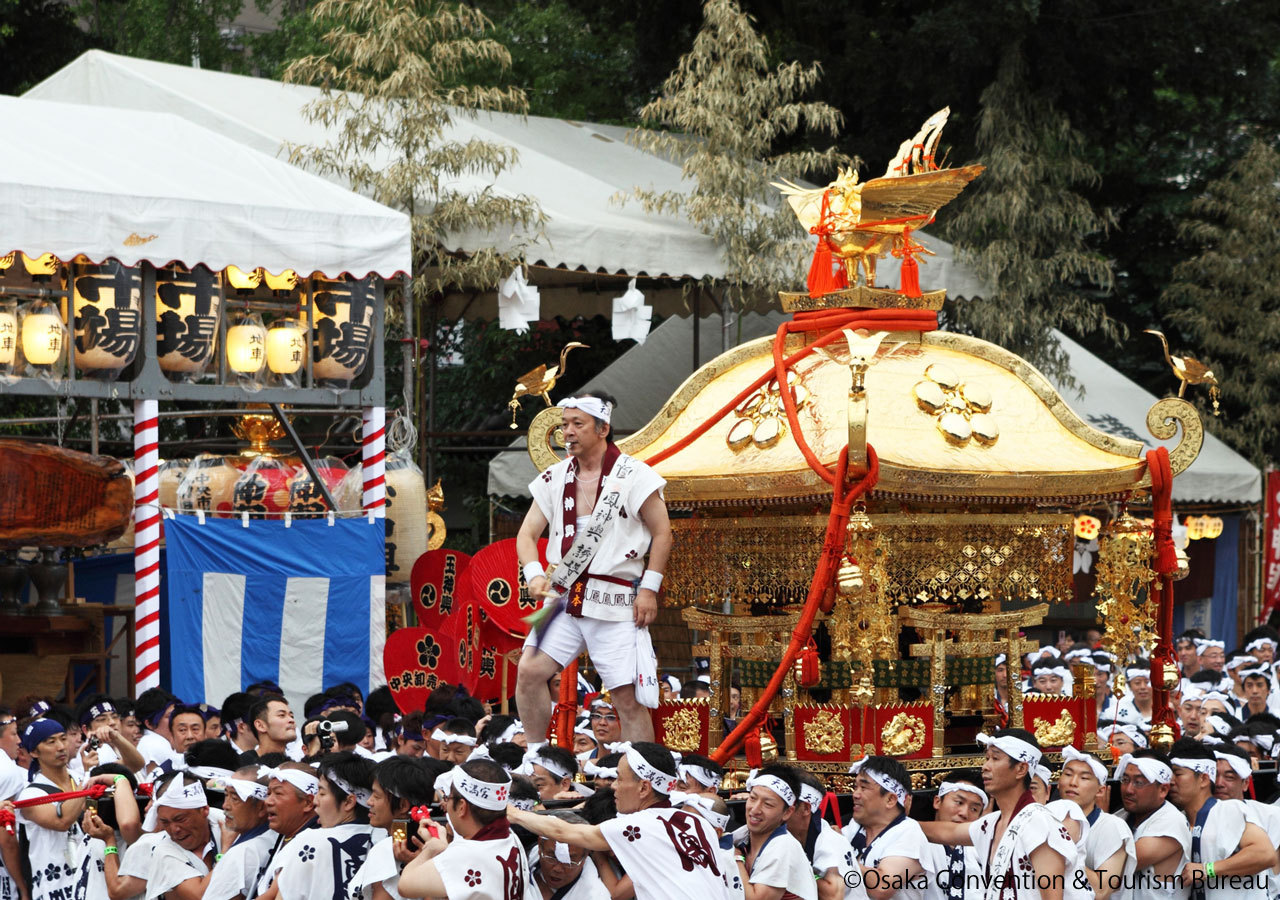 Tenjin Matsuri is a celebration honoring the death of Sugawara Michizane, the Shinto god of learning thought to be enshrined at Osaka Tenmangu Shrine. This festival takes place every year on July 24th and 25th. During these two days, there are many ceremonies and events including lion and umbrella dances. A splendid procession takes place on the 25th in which a mikoshi or portable shrine thought to contain the spirit of Sugawara Michizane is carried through the streets. 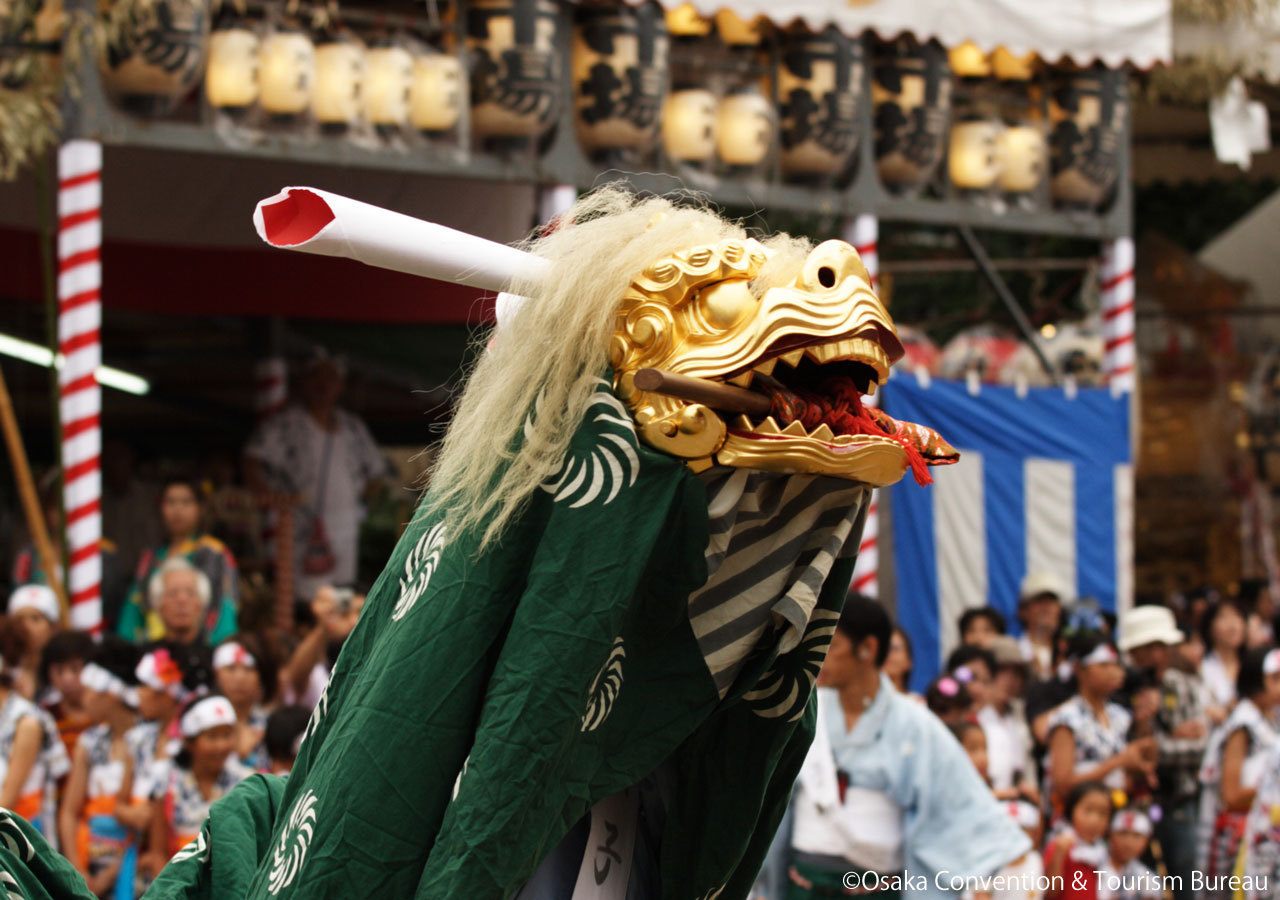 On the evening of the 25th, the mikoshi and the participants are loaded onto boats and set into the river. The day culminates with a fireworks display. 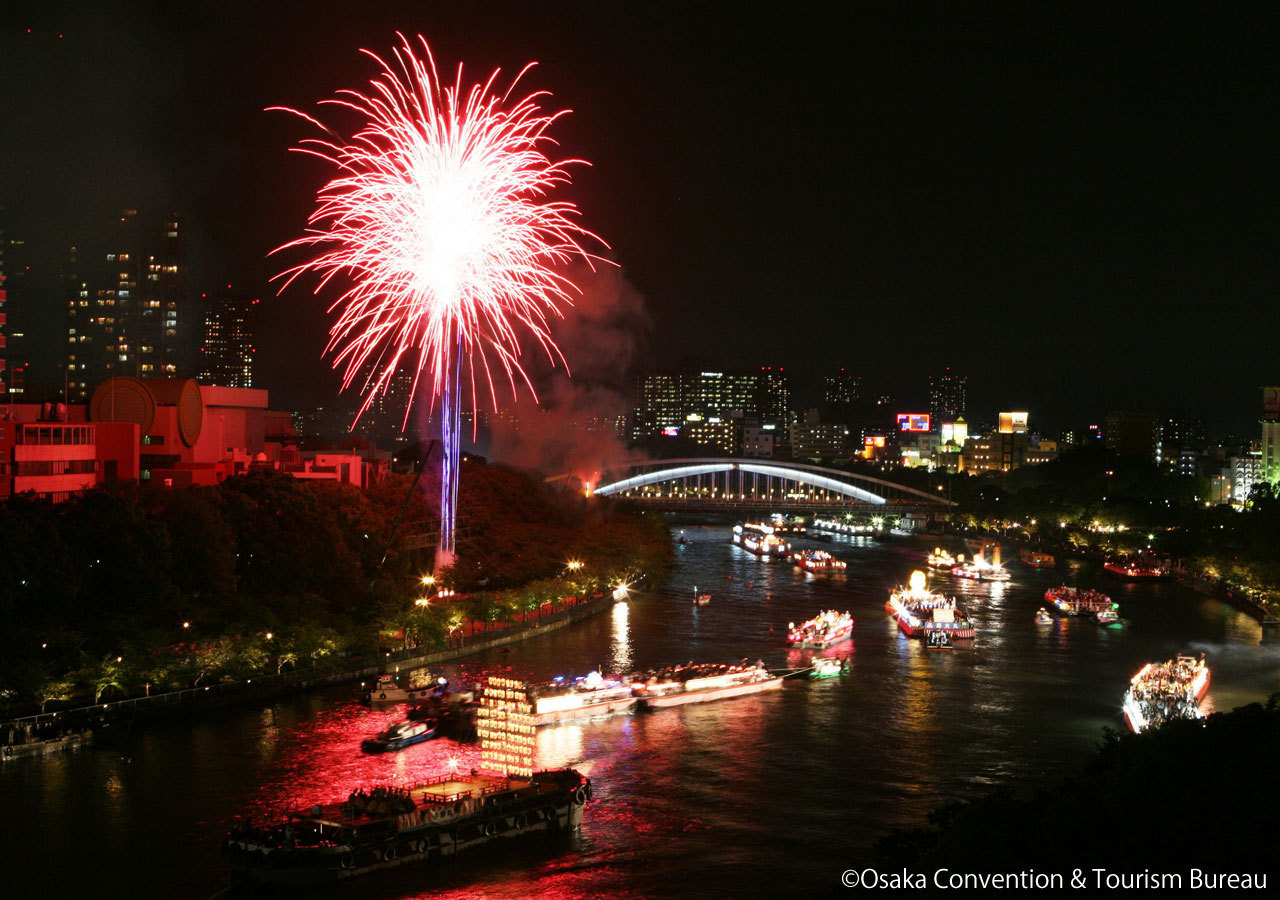 For more detailed information about the festival schedule, check the official page of the Tenjin Matsuri (auto-translated). 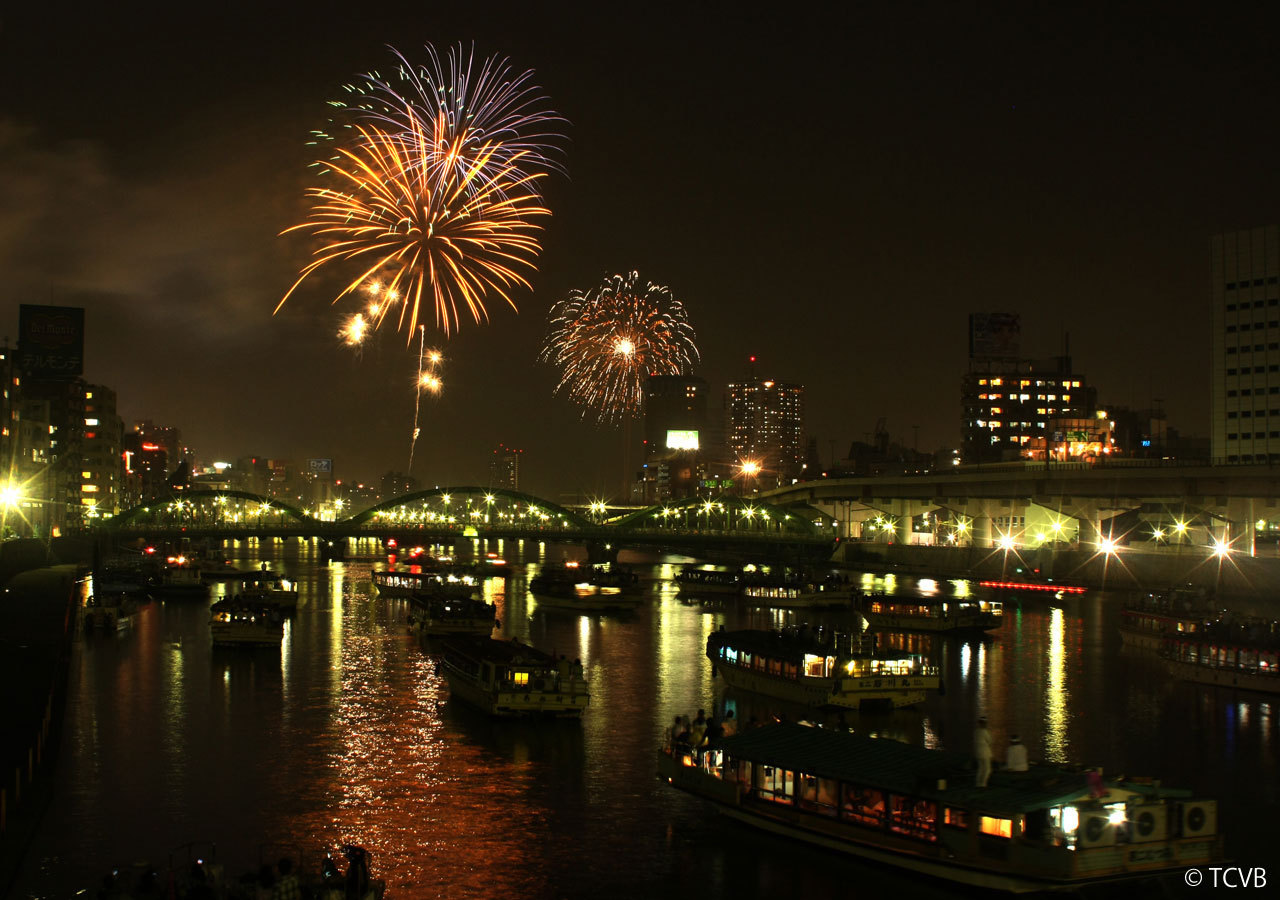 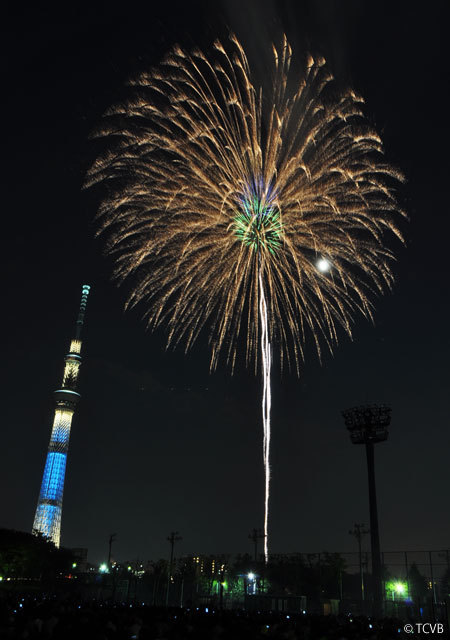 Locations and nearest stations:
Area 1 is close to Oshiage Station
Area 2 is close to Ryogoku Station & Kuramae Station
Asakusa Station & Honjo-azumabashi Station are between areas 1 and 2 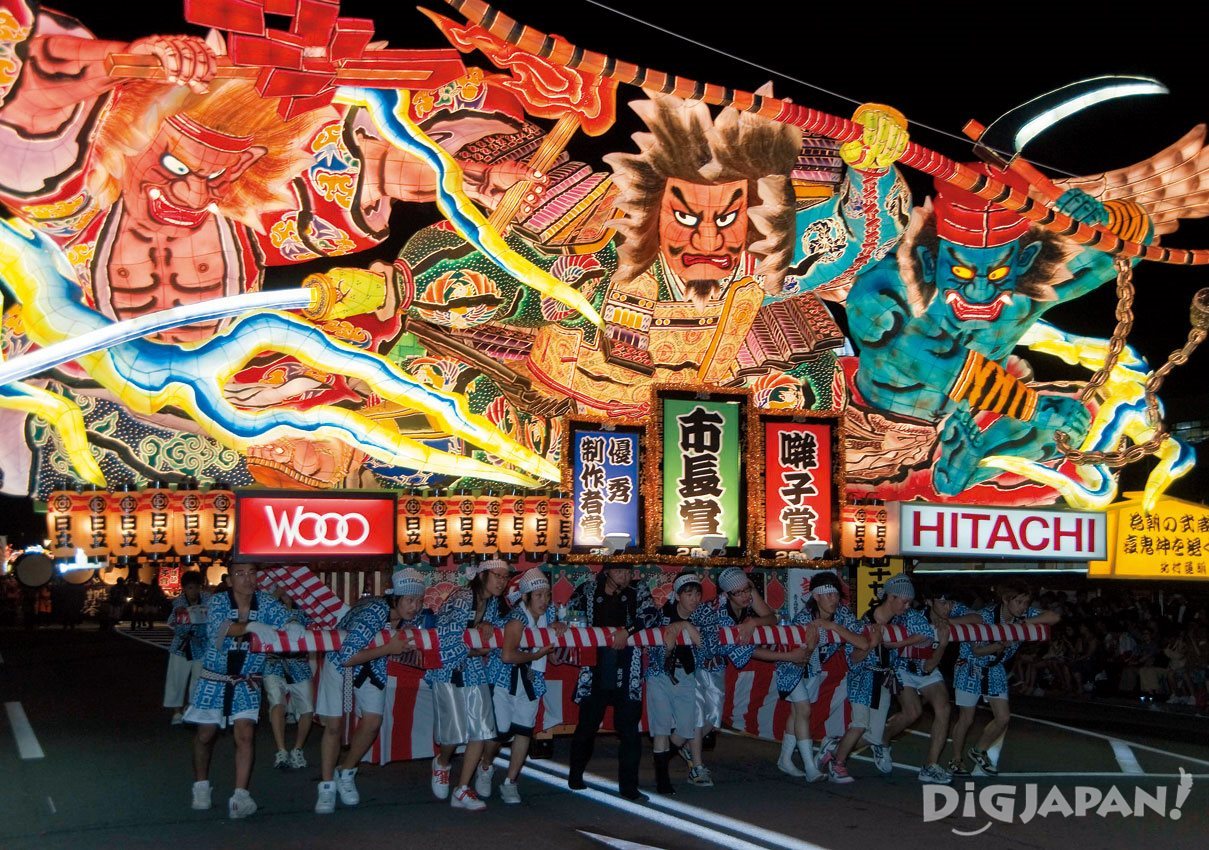 While the origins of the Aomori Nebuta Matsuri are uncertain, it's likely that the festival grew out of celebrations of tanabata. The highlight of this festival is the immense, colorful floats. Called ningyo toro (lit. doll lanterns), these take nearly an entire year to build and may weigh as much as 4 tons. They often depict scenes from legends, samurai, or kabuki actors. During the festival, these floats are pulled through the streets preceded by festival dancers called haneto accompanied by the music of taiko, flutes, and bells. One of the "Big Three" festivals of the Tohoku region, the Nebuta Matsuri attracts some 3 million visitors every year. 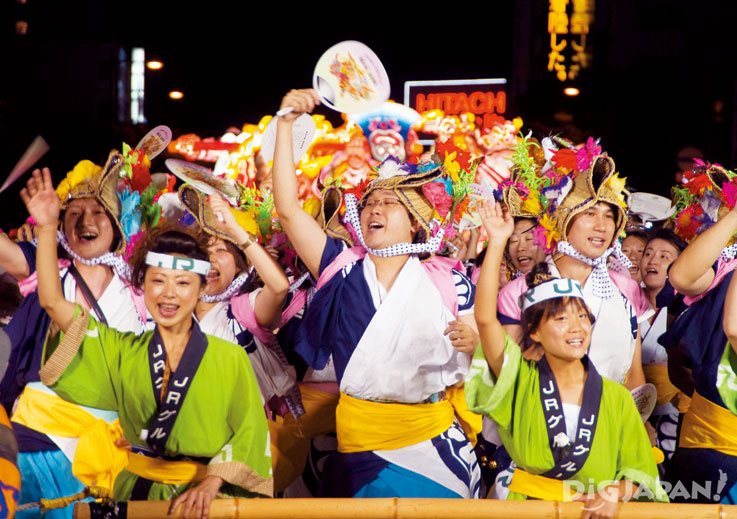 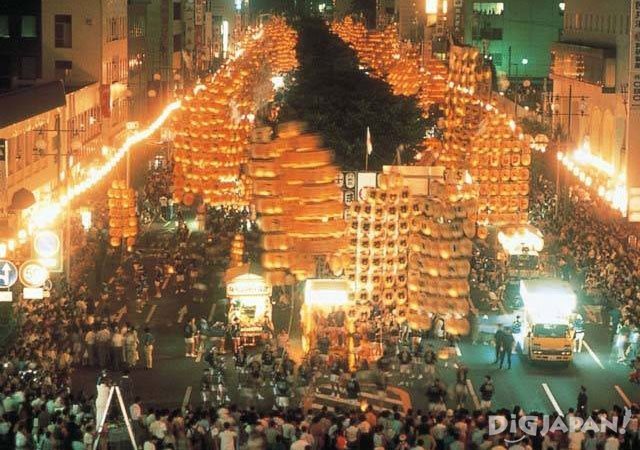 Akita Prefecture's Kanto Matsuri is another one of the Big Three festivals of the Tohoku region. While this matsuri is of uncertain origin as well, it is widely held that it began as a festival to banish midsummer illnesses and malevolence. 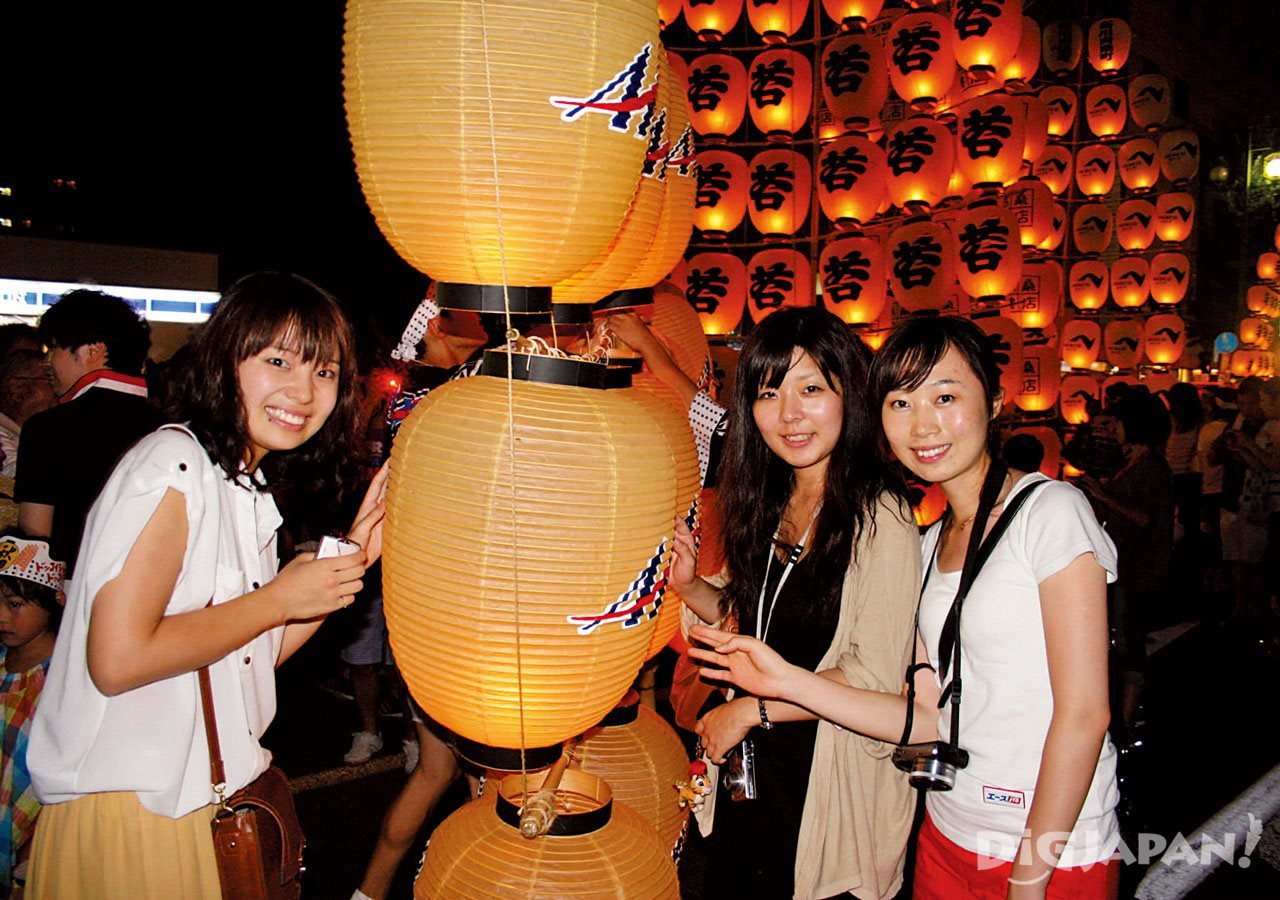 The main feature of the Akita Kanto Matsuri is the kanto-- bamboo poles that hold 46 large lanterns that are each roughly the size of a small child. Each kanto is 12 meters tall and weighs 50 kilos. Festival participants then balance them on their hands, shoulders, foreheads, and hips. Approximately 270 kanto are used during the festival. 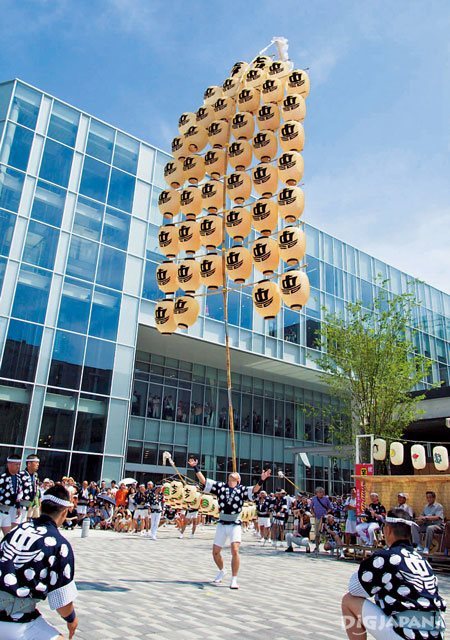 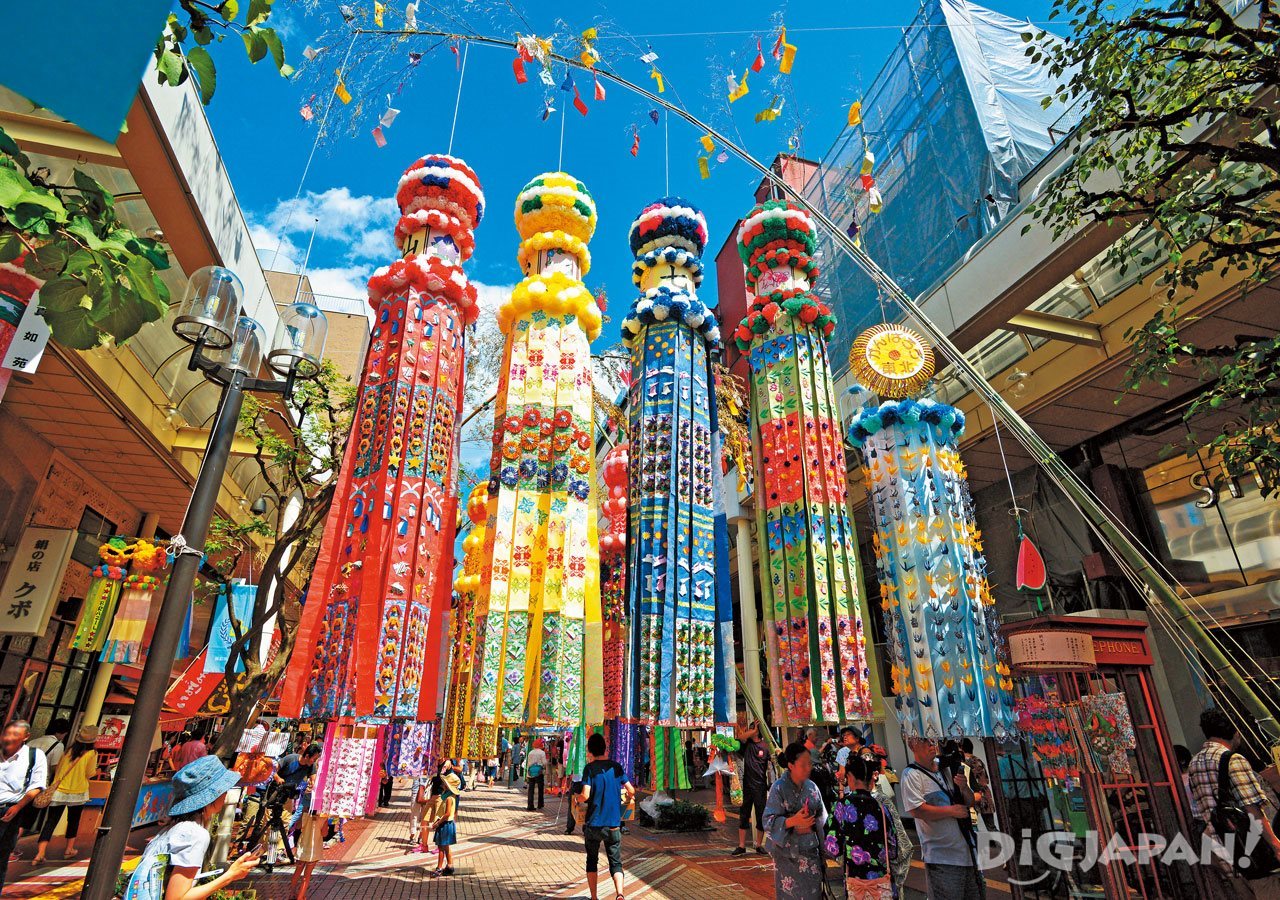 The festival of tanabata celebrates the reuniting of lovers who are forced to live on opposite sides of the Milky Way all but one day out of every year. Although tanabata festivals are held throughout Japan, the one in Sendai in Miyagi Prefecture has grown into a major event. In fact, it is the last of the Big Three festivals of the Tohoku region with around 2 million visitors coming every year. Starting with the outdoor shopping arcade, the downtown area is filled with colorful streamers called fukinagashi, the tails of which are decorated with origami. To celebrate tanabata, many people write wishes on strips of paper and hang them from bamboo. 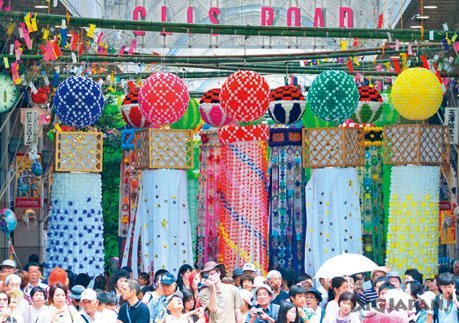 Location and nearest station: a portion of the course decorated with streamers begins close to the West Exit of Sendai Station

Visit the official page of the Sendai Tanabata Matsuri to learn more about festival activities. 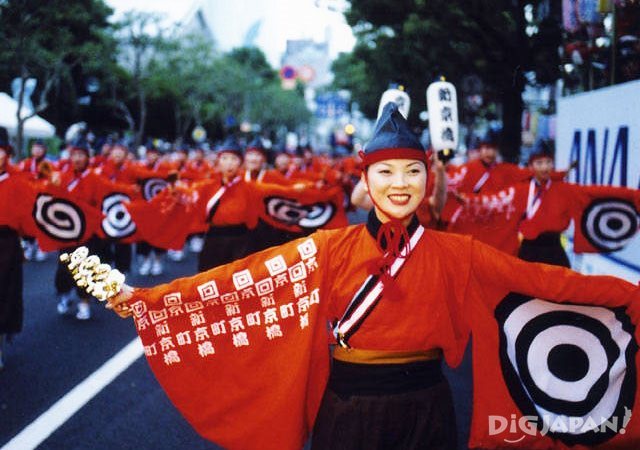 While there are Yosakoi festivals throughout Japan, this dance festival actually originated in Kochi, a prefecture which occupies the southwestern part of the island of Shikoku. During this festival, around 20,000 performers dance with clappers called naruko to a song called Yosakoi Naruko Odori. What makes this festival such a fun event is the creativity of the different performing teams. The teams have free reign over their costumes, the choreography, and even the arrangement of the Yosakoi Naruko Odori song. This means you’re just as likely to see groups dressed in kimono dancing to traditional-style music as you are to see a punked-out group dancing to a rock-inspired arrangement. 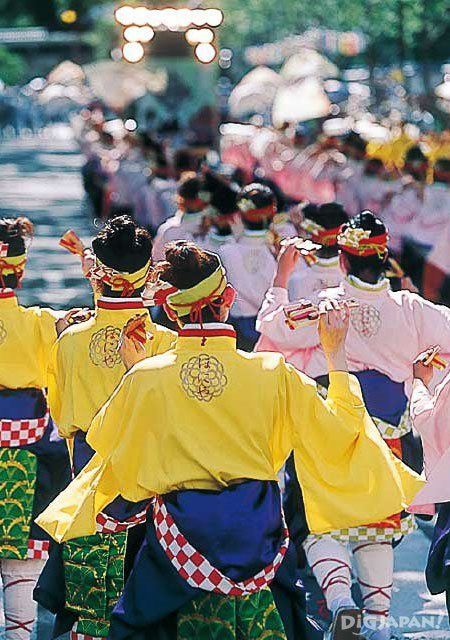 Location and nearest station: the dancing takes place in various areas in the vicinity of Kochi Station 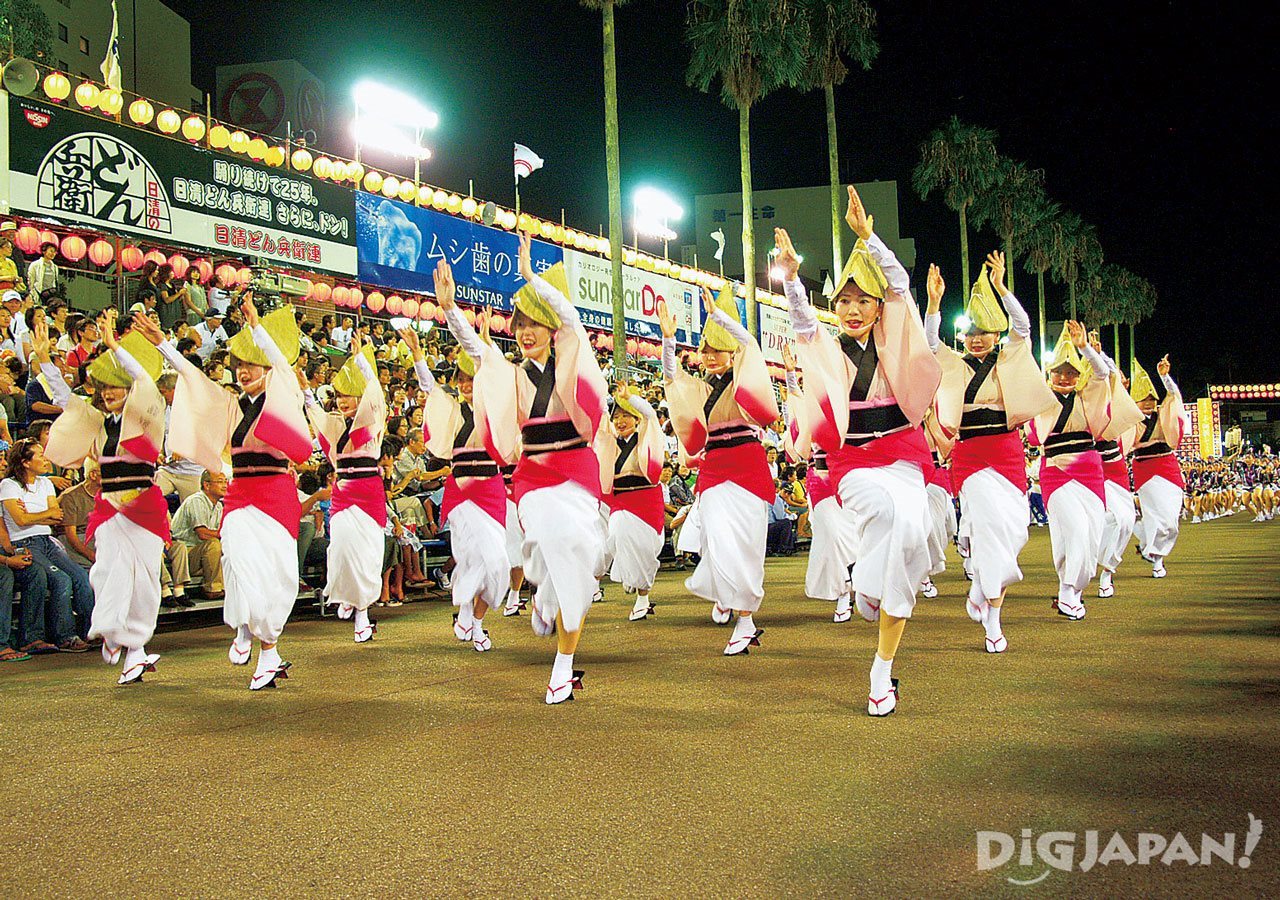 Every year,  950 groups called ren comprised of anywhere from 50 to 200 dancers each fill the streets of downtown Tokushima City with a dance called Awa Odori. The styles of dance are generally broken into those for men and those for women, but within those broad categories exist distinct styles. The dancers parade down the streets to the accompaniment of shamisen, flutes, bells, and various drums. 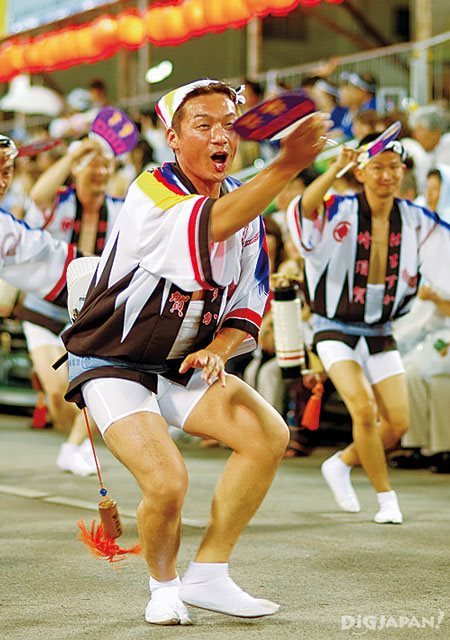 It’s said Awa Odori was born when drunken dancing broke out during a party thrown to celebrate the opening of Tokushima Castle in the Edo Period. (In truth, the history of this dance dates back even further than this, but it’s a good story.) Because of its slightly silly appearance and shuffle rhythm, it’s also called the Fools’ Dance. But when you see the performances, especially those of the famous ren, you’ll realize that this dance requires some serious stamina and dedication to master. 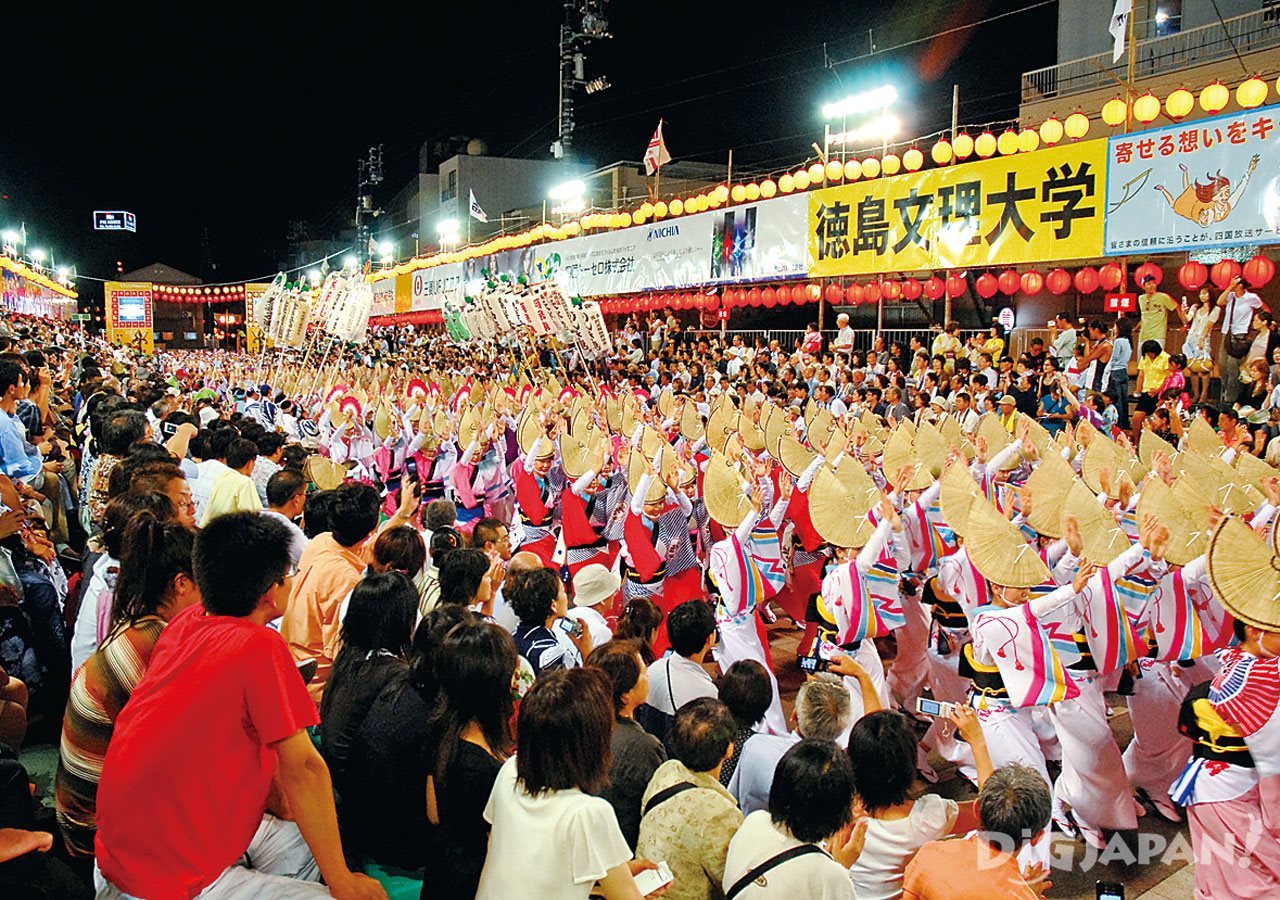 Location and nearest station: the dancing takes place on stages and in the streets around JR Tokushima Station

Note: tickets are required for certain performances including the finale. Tickets can be purchased starting July 1 at convenience store ticket kiosks (Japanese only) and from the Awa Odori Information Center (阿波踊り総合案内所) in front of JR Tokushima Station. 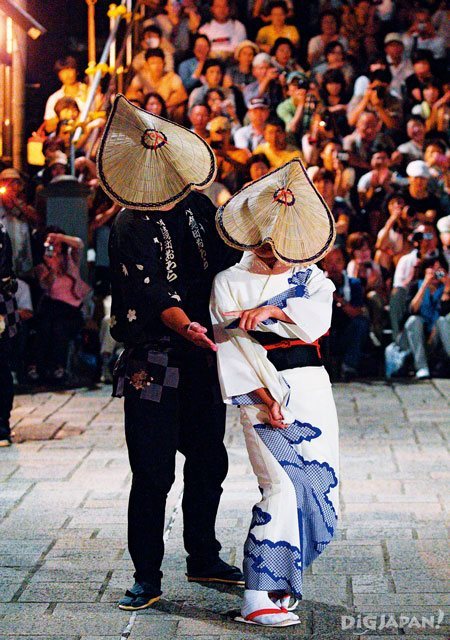 Like Awa Odori in Tokushima, the Owara Kaze No Bon is a type of Bon Odori-- a style of dance performed during the season of O-Bon to welcome the spirits of dead ancestors. Unlike the energetic Awa Odori, Owara Kaze No Bon is refined and elegant, making use of gestures with hands and sleeves as performers dance to haunting music played by shamisen and kokyu-- a small shamisen-like instrument that is played with a bow. 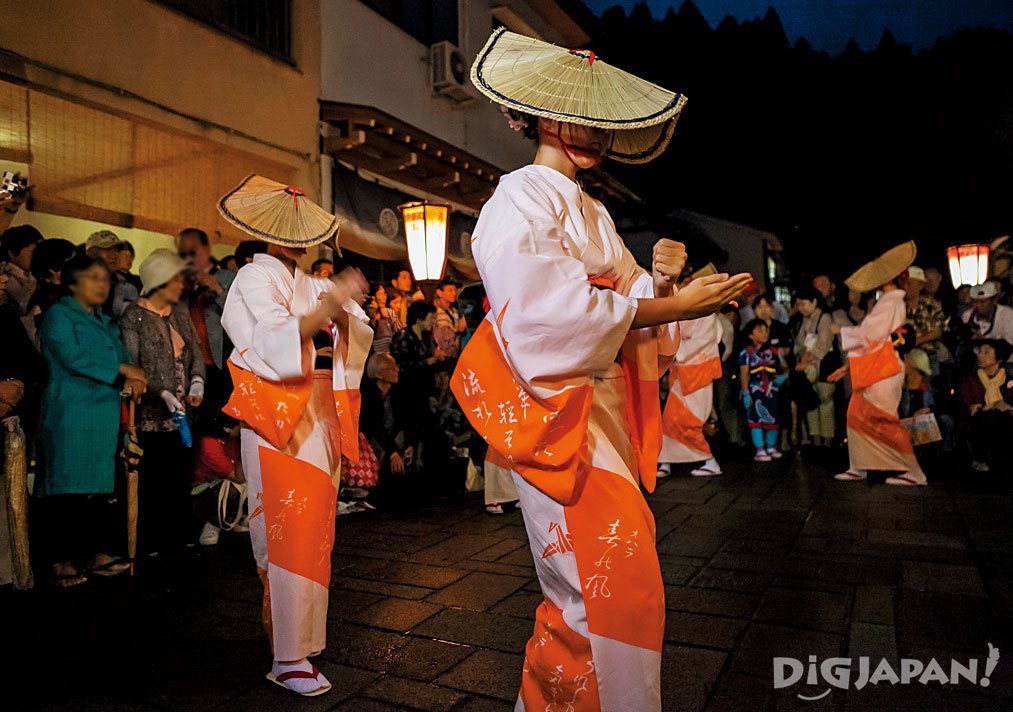 Although the origins of this festival are also unclear, it is thought that it was born in the Edo Period from festivities that stretched on for three days and three nights to celebrate the retrieval of important documents that had been lost on the outskirts of the village of Yatsuo. While still relatively unknown abroad, this beautiful festival attracts some 200,000 visitors to the town every year. 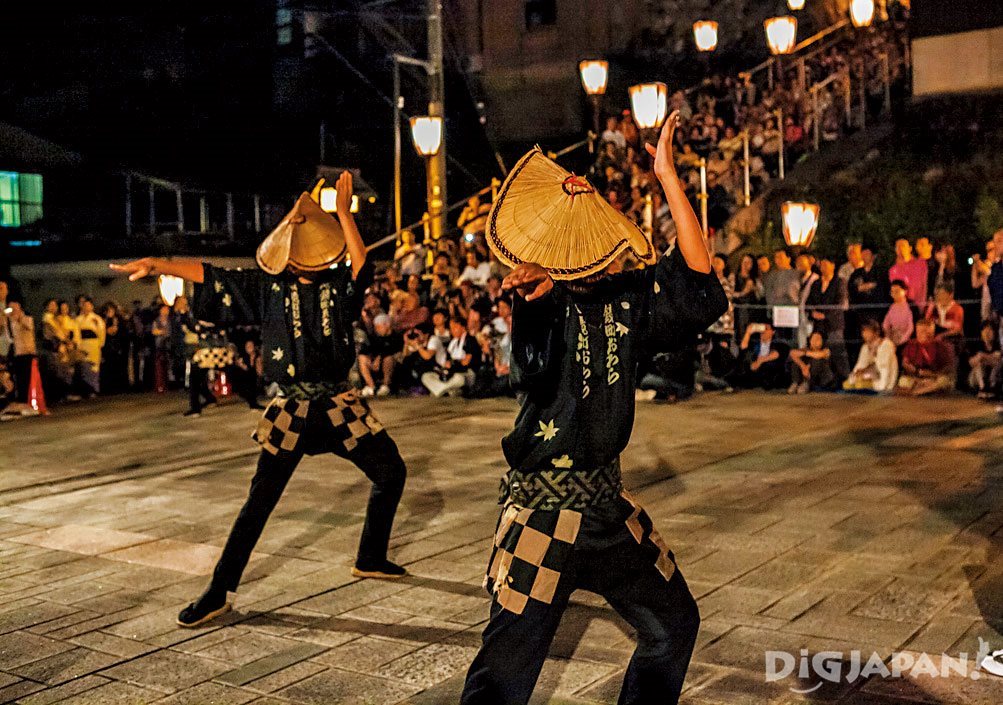 Location and nearest station: dancing takes place in various towns throughout the city of Toyama. These locations are approximately 40 min walking distance from JR Etchu-Yatsuo Station 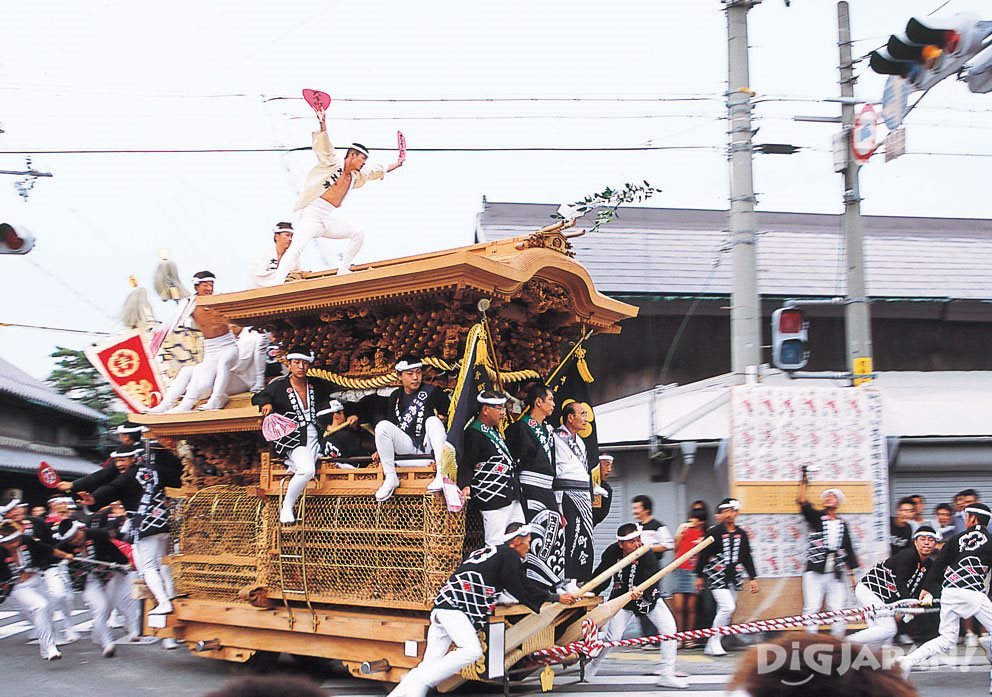 Of all the festivals involving wooden carts called danjiri, the Kishiwada Danjiri Matsuri is probably the most famous. It is said that this festival began as a ritual to ensure a good grain harvest. Today, it continues as a means of connecting people with their local community. 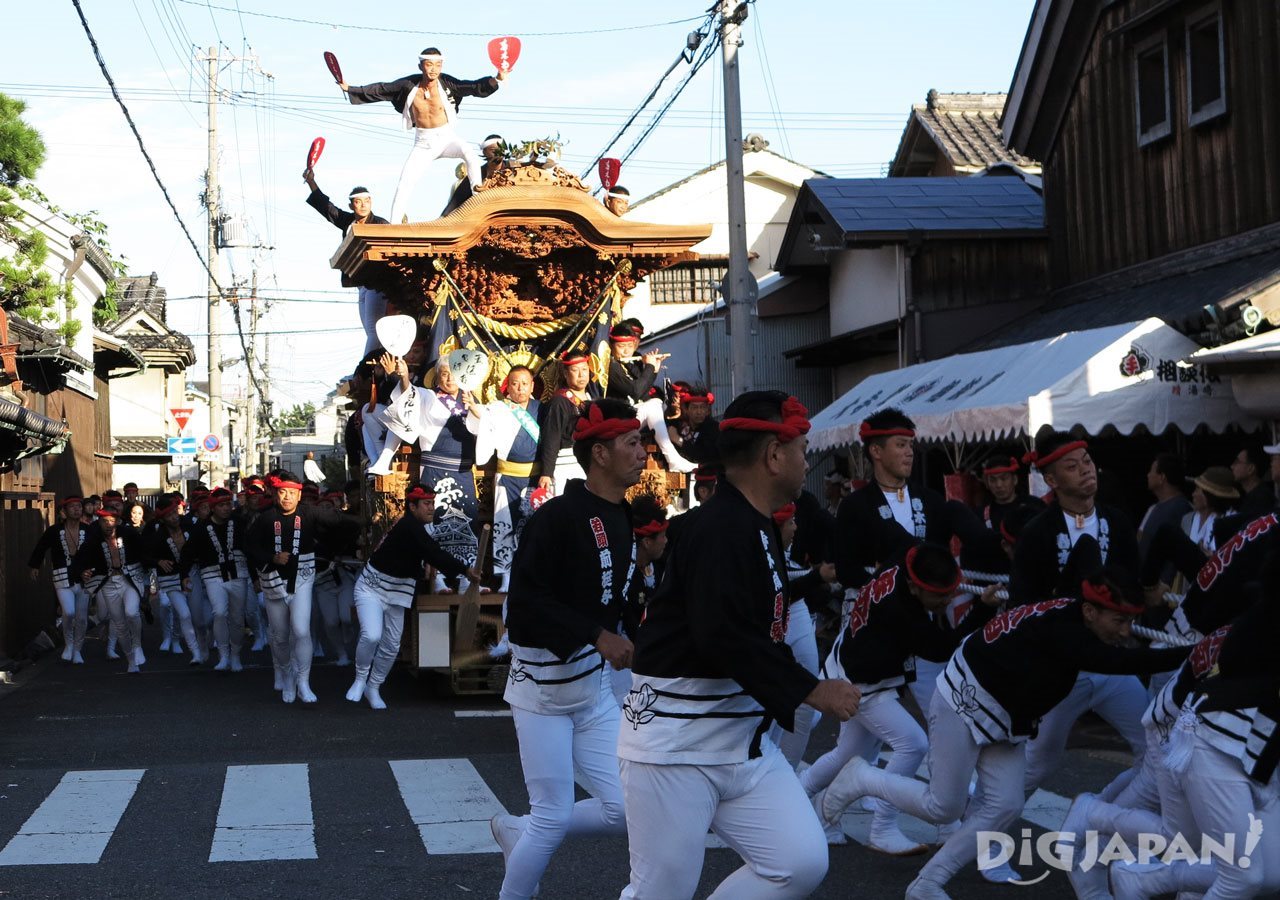 During the festival, you’ll see young men pulling these large carts as fast as they can through the streets while musicians play inside and the daiku-gata or carpenter dances on top of the moving cart. One of the most heart-stopping moments of the festival is when the carts skid around corners. Understandably this is a bit dangerous, so if you go please be sure to listen to the instructions regarding where you can safely watch the festival. 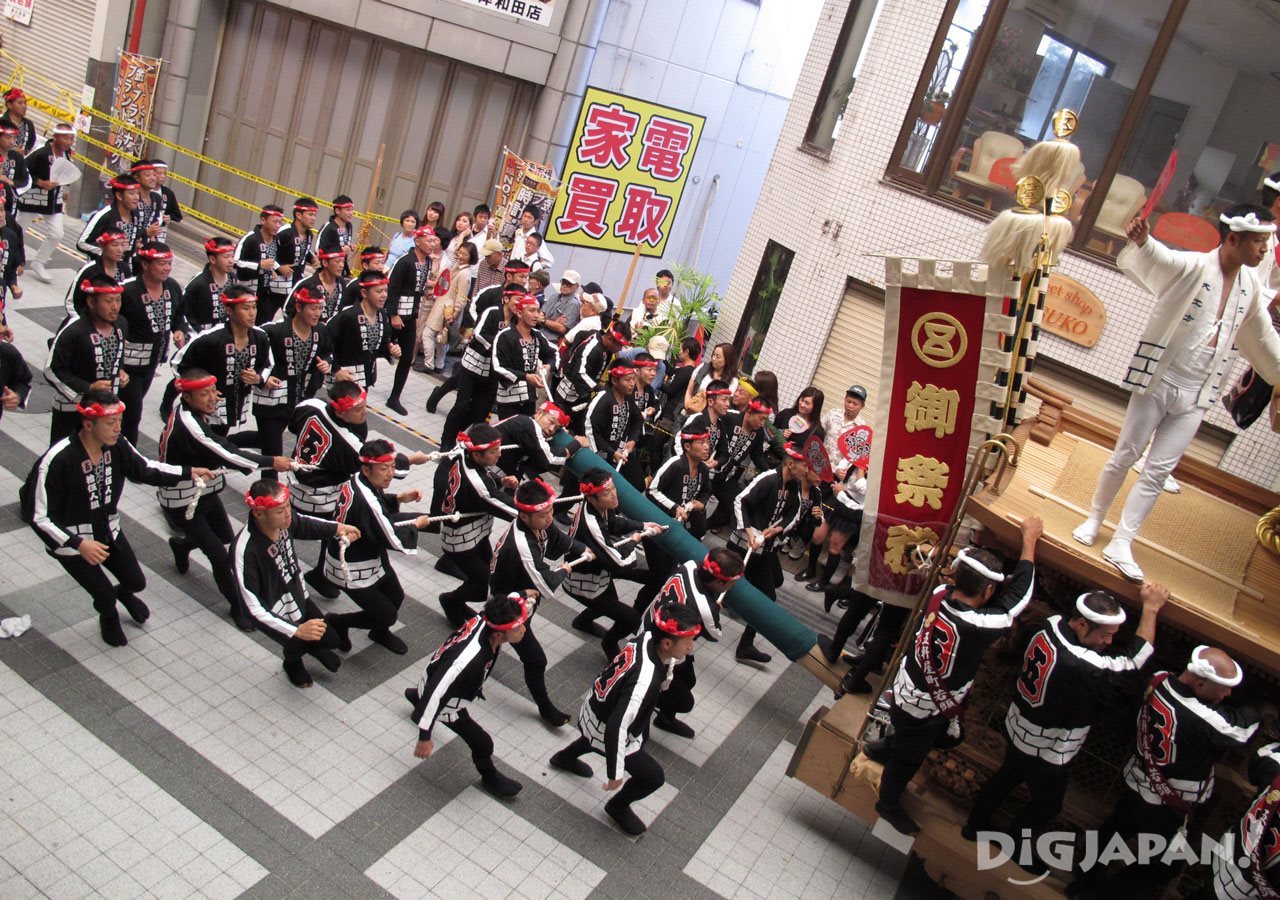 Location and nearest station: event takes place in the area around Kishiwada Station

Have you ever been to one of these festivals? If you have, feel free to tell us about it in the comments!

Note: all dates included in this article are accurate as of June 2016. Schedule changes may occur, so please be sure to check the home page of these events before going.