Masterwork matcha tea, crafted skillfully by the most skilled of tea masters

Uji matcha tea is made in the southern region of Kyoto Prefecture. Matcha tea is a kind of green tea and is deeply embedded in Japan’s traditions and culture as the tea used in the country’s tea ceremony.

Tea is originally said to have been brought back to Japan by Buddhist monks who, in the Nara and Heian periods (710-1185 AD), were training in Tang, China, using the tea to keep them awake and as a restorative. In Kyoto, backed by the history of people in power at the time protecting tea farming, quality tea (Uji matcha tea) has been produced continuously to this day.

Nowadays matcha tea is used also as an ingredient for sweets, and its taste attracts not only Japanese people but many others around the world.

This time we visited a master tea craftsman creating a matcha tea called “Senkei No Shiro” who is driven by a passion to deliver the charms of matcha tea from one of the largest tea production areas in many more forms than before. 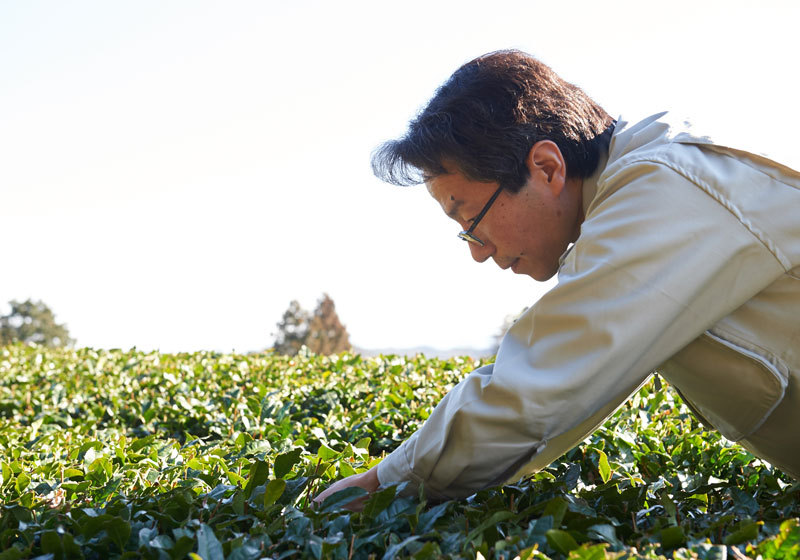 In Japanese, the word chashi means an artisan who makes tea. Chashi analyze and select tea leaves and blend them while bringing out each variety’s character to create the taste that they seek. Chashi are ranked depending on their skill as connoisseurs of tea, and as of 2015, only 13 chashi have been granted rank 10, the highest honor. Yasuyuki Suda, aka Genbei Higashi, is a rank-10 tea master and the 6th generation chashi of Hokodo, an esteemed Uji tea retailer of Kyoto with a history more than 180 years long. 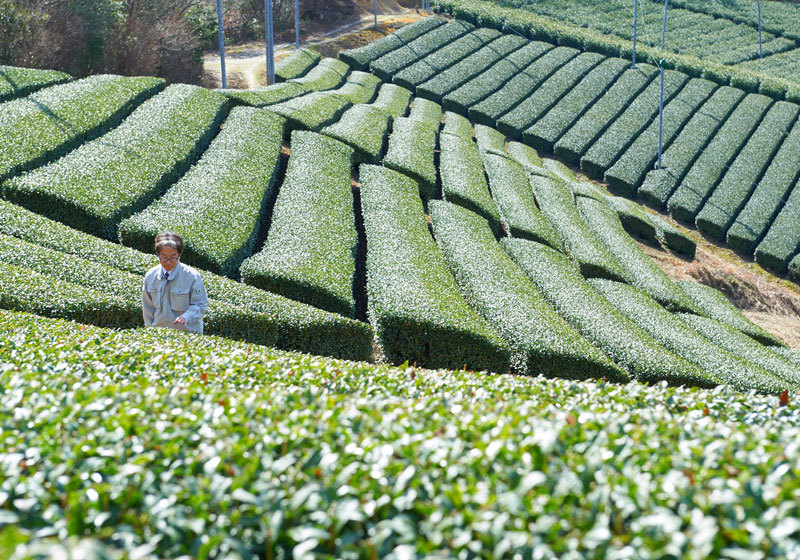 Yasuyuki not only selects and blends tea, but also visits the company’s tea farm daily to build the taste of tea from scratch and to collaborate with the farmers to explore the best methods for growing the finest tea.

“I think this farm is everything. Unless I am involved from the farming stage, I will never be able to create the kind of matcha tea I am dreaming of. We have our own tea farm and manage other tea farms as well, so we blend and assess tea, as well as farm it. This is the essence of tea making I think.”

Even if two farms are in the same area, they will produce tea with different characteristics, depending on variety, climate and soil quality. Yasuyuki says cultivating tea is “much like developing a person.” 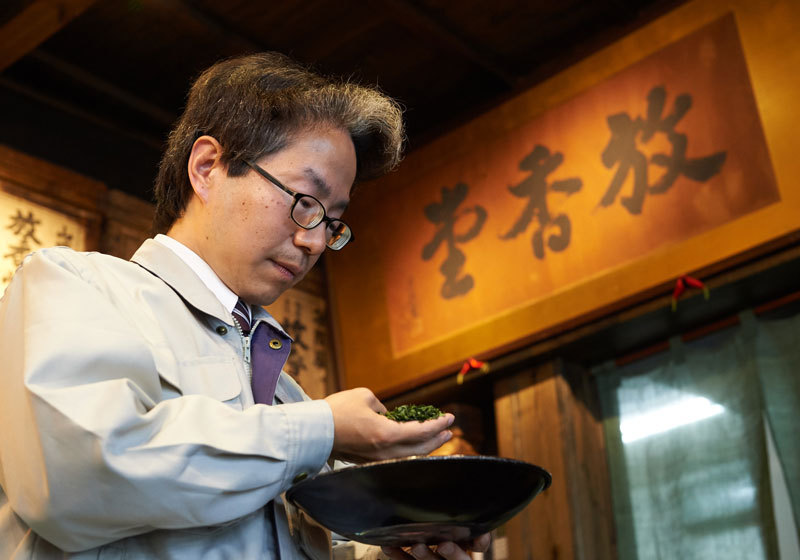 “When you visit the farm every day, you begin to understand how each tree is feeling. For example, if the tea is not looking well, you put some grass on its roots, like a blanket. You do the same with fertilizer. People cannot eat steak when they are not well. Likewise, you give a tree fertilizer when it wants it. This is something our predecessors taught us, and also something we learn by experience. Some farms are cheerful, happy and do not need much care, and some farms get grouchy when they are neglected. There is a wide variety of characteristics. I never get bored of looking at tea farms, even if I go every day.” 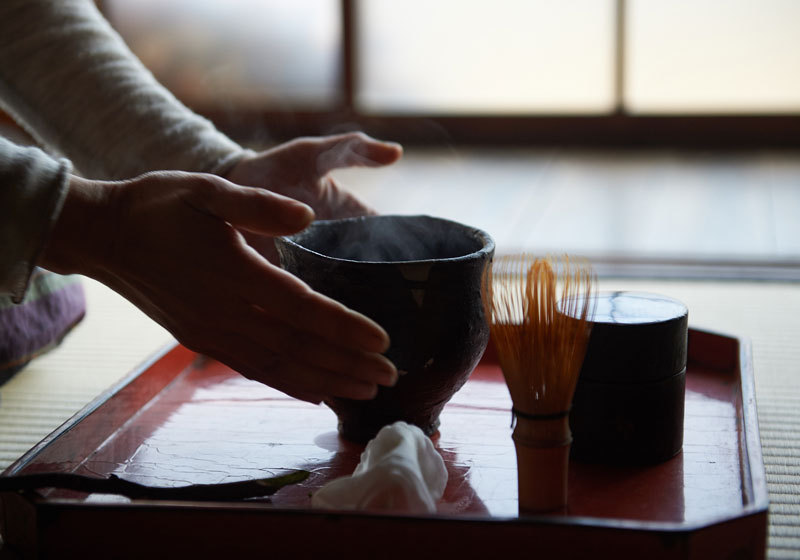 Tea leaves, grown with so much care, are in their prime for only two to three days, sometimes even for only a day. Yasuyuki never leaves the farm from the end of April to the end of May, around the time the tea is harvested, to pick the tea leaves without missing the best moment. Yasuyuki is also thorough and never takes stimulating substances like chili peppers and wasabi, let alone alcohol or cigarettes, to protect his delicate sense of taste and smell as a chashi. Every behavior and word from Yasuyuki shows his deep love for tea.

Senkei No Shiro, the challenge for the 10th rank chashi 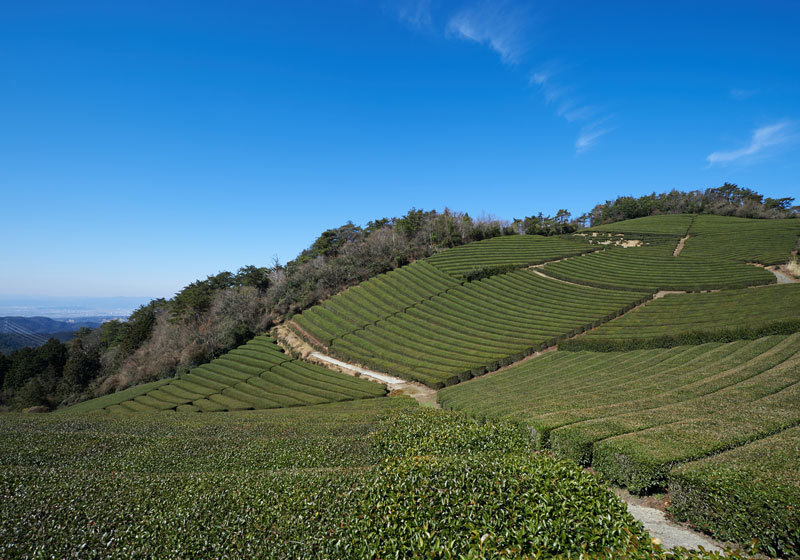 Tea grows on tea trees, and the soil of the mountainous southern region of Kyoto Prefecture is suitable for its growth. Its climate with large temperature fluctuations and ample water from the Kizu River are also the reasons tea has been farmed in this region since ancient times. The landscape of tea farms that sprawl on the mountains like waves are majestic and very beautiful.

Tencha tea, the ingredient of matcha tea, is grown in a tea farm covered in reeds and straw, to block sunlight. After harvest, it is immediately taken to a processing plant, steamed, heat-dried in a machine called a “tencha furnace,” and then its stems and veins are stripped. The tencha tea is then milled and becomes matcha tea.

Currently, Yasuyuki is in the middle of developing Senkei No Shiro, a matcha tea used as an ingredient for sweets and other food items.

When matcha tea is used as an ingredient, it is important to derive good taste, color and bitterness, which are the three elements that are vital for a good matcha taste. However, compared to brewed matcha tea for drinking, it is harder to derive these elements from the matcha tea used for processed products, says Yasuyuki. So he came up with the idea of blending three different matcha teas from different farms and of different varieties. He kindly showed us the farms that produce these teas. 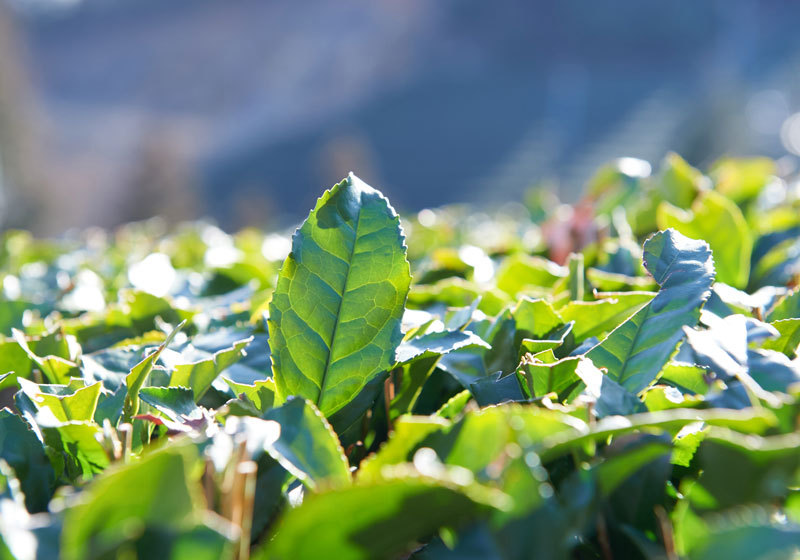 The first was Sakimidori, the variety that is grown in Wazuka Town, Soraku District. The tea farm is covered by “shelves” to block and adjust the light shining on the tea leaves to ensure they develop a good taste.

The second is the Yabukita variety, from Dosenbo, Minamiyamashiro Village, which is 450 meters above sea level. The temperature here is are four to five degrees Celsius lower than places at sea level. In order not to succumb to this cool climate, the tea leaves become thicker, producing a delicately bitter taste.

Similarly, the third tea farm, which is in the Tayama region of the same village, produces Samidori, a vividly green variety with large leaves.

A blend of these three varieties, Senkei No Shiro, the matcha tea perfectly suited for processing into products, offers good taste, color and bitterness, the characteristics unique to matcha tea.

Senkei No Shiro is the fruit only possible by the precise connoisseurship and special attention of Yasuyuki, who is faced with tea farms day after day.

Daily scenes with tea to be passed on future generations 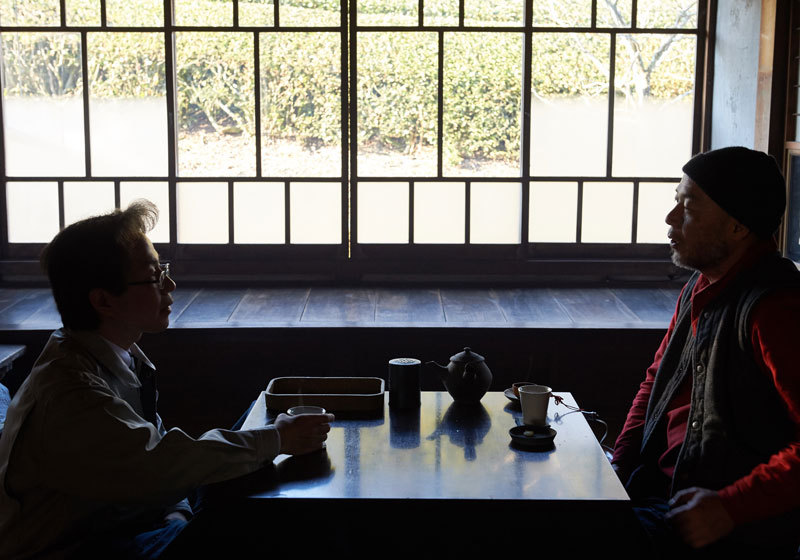 “There is a place I know who serves good tea,” said Yasuyuki and took us to the house of potter Yoshiyuki Shimizu, in Dosenbo, Minamiyamashiro Village. The 80-year-old traditional Japanese house has a Japanese room equipped with a traditional heated low Japanese table, and a sprawling tea farm outside its lattice window.

Yasuyuki had always wanted to preserve the tradition of serving tea in a teapot, and met Yoshiyuki after traveling around Japan looking for a potter who would craft his ideal teapots and cups. Yasuyuki was mesmerized by Yoshiyuki’s style of using the local soil for his earthenware, and by his charming products and personality. 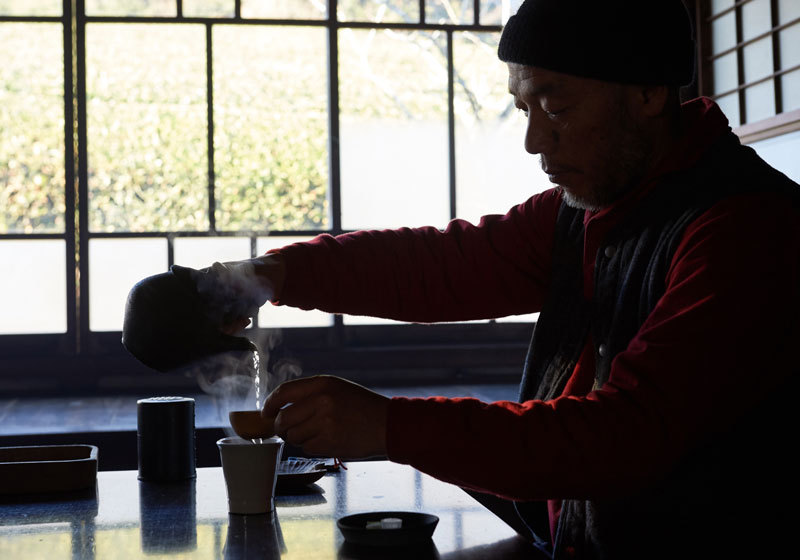 Enjoying the aromatic tea Yoshiyuki roasted, Yasuyuki talked about his dream as a chashi.

“Whenever I come to Dosenbo I always come here. When you are in this kind of space, you want to brew tea in a teapot and chat. This chat is what epitomizes Japan’s tea culture, I think. More than the techniques of the chashi and so forth, I want to communicate this kind of scene to people.” 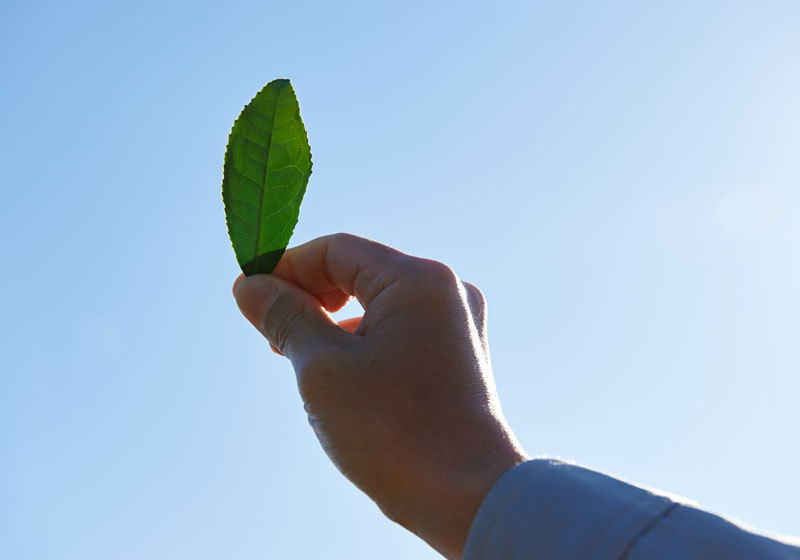 “If you put regular matcha tea into sweets like cakes and puddings, matcha’s good taste and bitterness can fade. Senkei No Shiro goes well with other ingredients and retains matcha’s unique taste,” says Yasuyuki.

“Senkei means ‘a thousand pleasures’ in Japanese. Just as the name suggests, I would like many people to see and enjoy how wonderful matcha tea is,” says Yasuyuki.

The matcha tea crafted with so much care by the 10-rank tea master. Why not enjoy the taste of the fruits of his passion?

Uji matcha tea from the southern region of Kyoto Prefecture 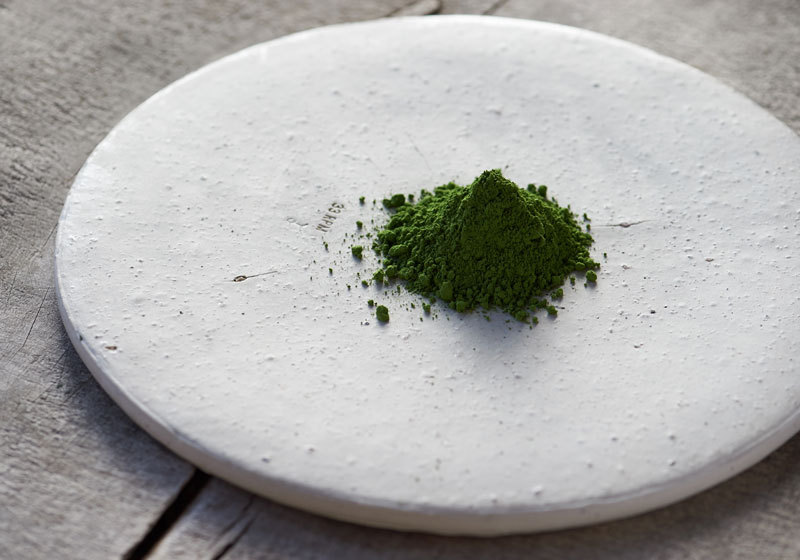 In season: matcha tea tastes better during the summer once it has matured after the new tea season of early April to early May. In the world of tea, this maturing process is called “withering.” 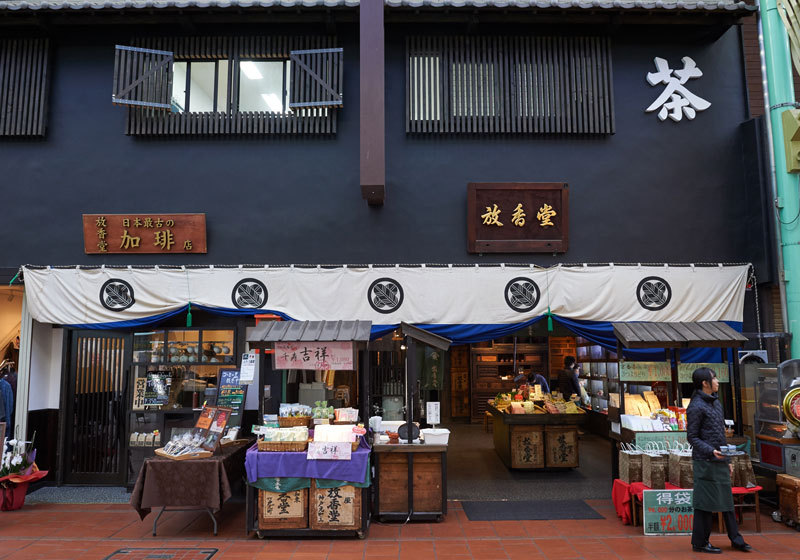 About SHUN GATE
Shun is the Japanese word which refers to the period of time in which raw ingredients are in season. As such, SHUN GATE is the gate to the stories of the people, techniques, technologies, and the lands that make up Japanese food culture and its seasonal characteristics.