Order a Cocktail from a Monk at Vow's Bar in Nakano

"Why," asked the Japanese man sitting at the counter, absently stirring his drink, "do you run a bar?"

"Well," answered Shaku Genko, "has anybody ever said that a monk can't run a bar?"


A Bar Run by a Monk 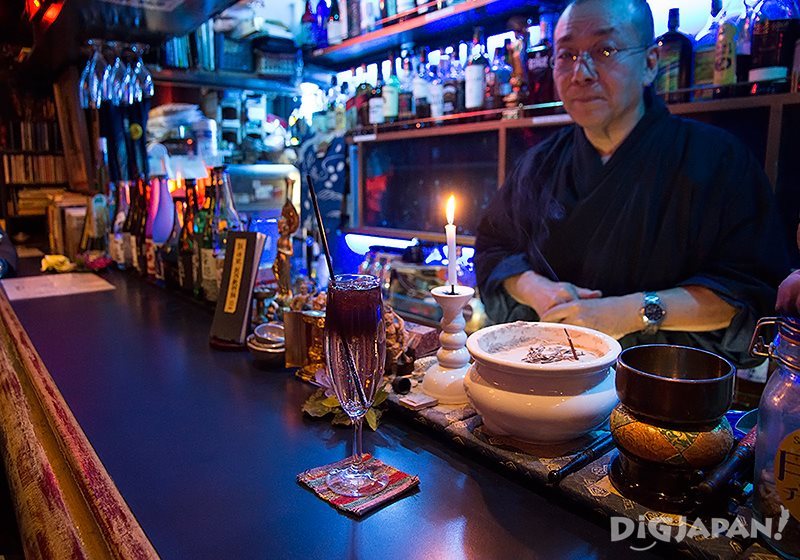 Shaku Genko is a Buddhist monk of the Jodo Shinshu sect, the most widely practiced Buddhism branch in Japan. He has been running Vow's, a monk bar, for 13 years. Sitting in the dimly lit, peaceful small space,  we listened to Shaku Genko's calm, deep voice telling us the story behind his bar. 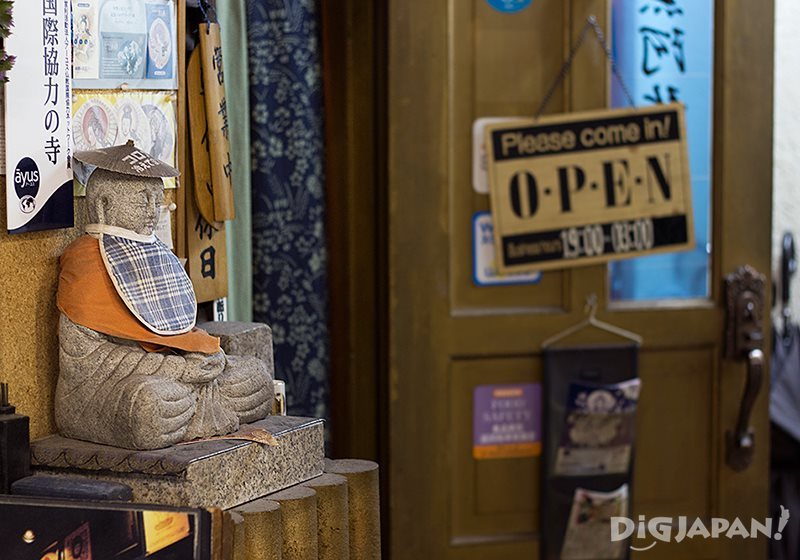 At the bar entrance is a Jizo statue.

"I became familiar with Buddhism when I was 27 while living in France," he explains, " and studied it with great passion for 25 years. However, at first I did not want to become a monk.

"Buddhism used to be about teaching people, it used to affect every aspect of people's life. In the Meiji period, the Westernization of Japan brought new systems like schools and other institutions into the country, overtaking the monks' role of life guidance.

"Temples became tourist spots, and the only role that monks retained was that of holding funerals; all that was left to sustain the monks economically was mostly the so-called 'Funeral Buddhism' and 'Sightseeing Buddhism'. 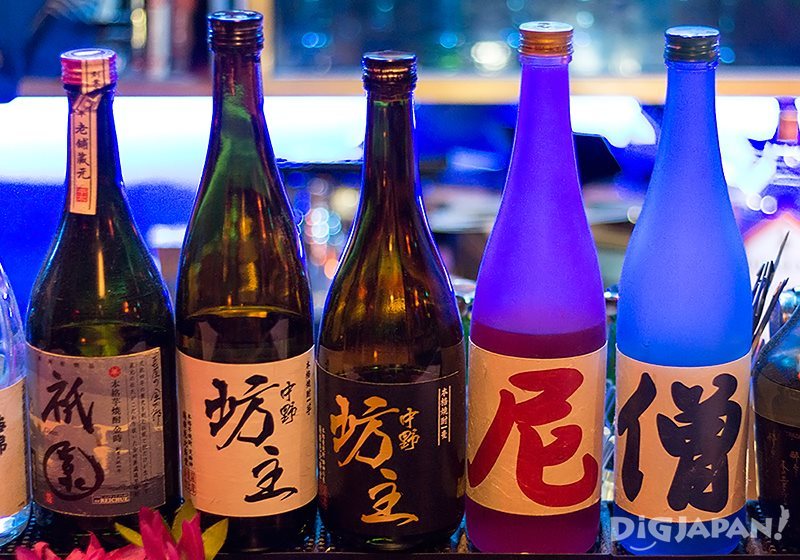 "I asked myself, 'Is this what Buddha told us to do?' The main role of Buddhism was not guiding living people anymore.

"If becoming a monk meant just funerals and tourism I didn't want any part of that. I knew that the core job of a monk is to be among people; listening to their troubles and giving them advice about life." 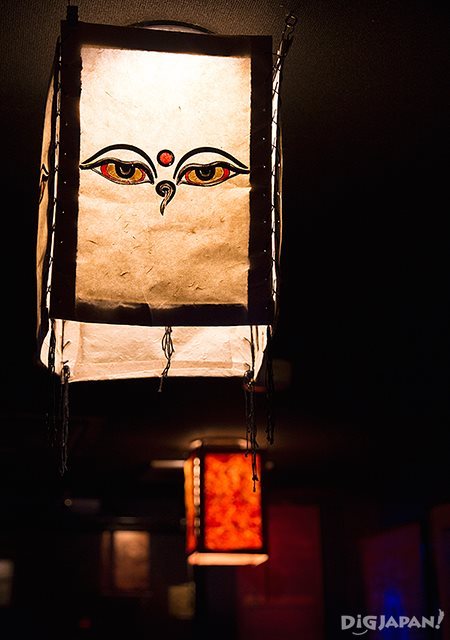 "The first monk bar was opened by monks from the Zuikoji temple in Osaka. When I found out about it, I asked them to take me as their apprentice and started working at the bar.

"I had found a place that, for me, was close to what real Buddhism is. So, I finally became a monk. I was 50 at the time." 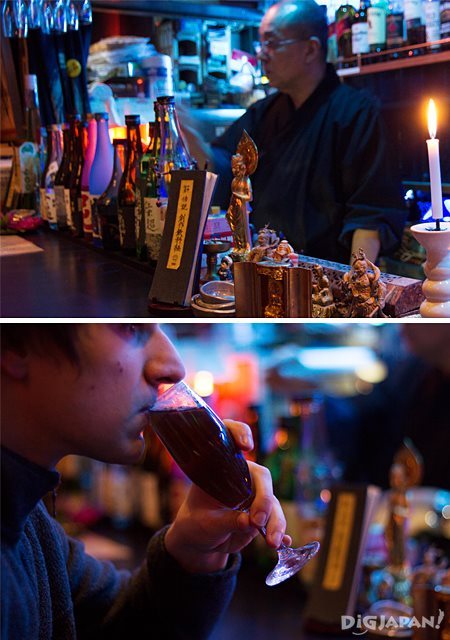 Genko-san uses his bar as a means to be close to people.

In 2004, Genko-san moved to Tokyo and opened his own monk bar in Nakano. For 13 years he has been receiving people at Vow's, listening to their concerns and problems. He gives them advice and tells them about Buddhism.

"Young people come here all the time," he says matter-of-factly, "people can have a drink and run away when they want. It's a bar, it's easy to come in." 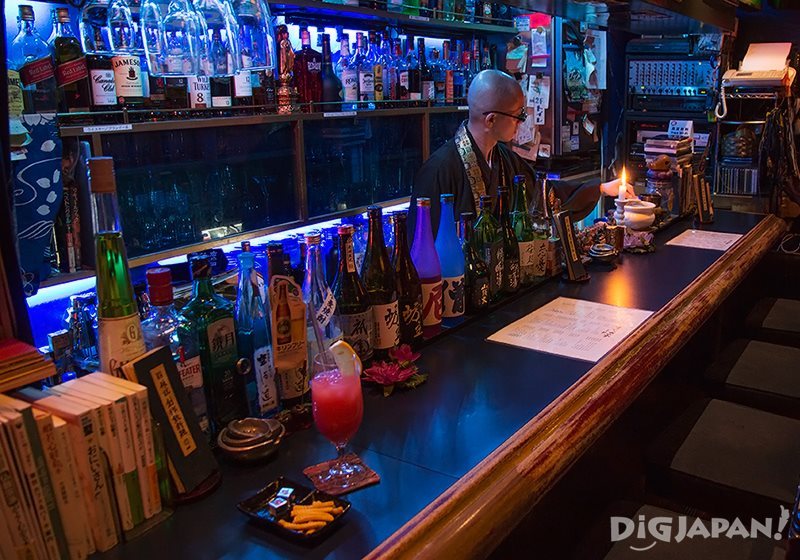 Upon entering, we were welcomed by soft vocal jazz music as we took a seat at the small counter. Incense was lit for us. As in many other cultures, incense is used to purify the air for the visitors that just arrived. 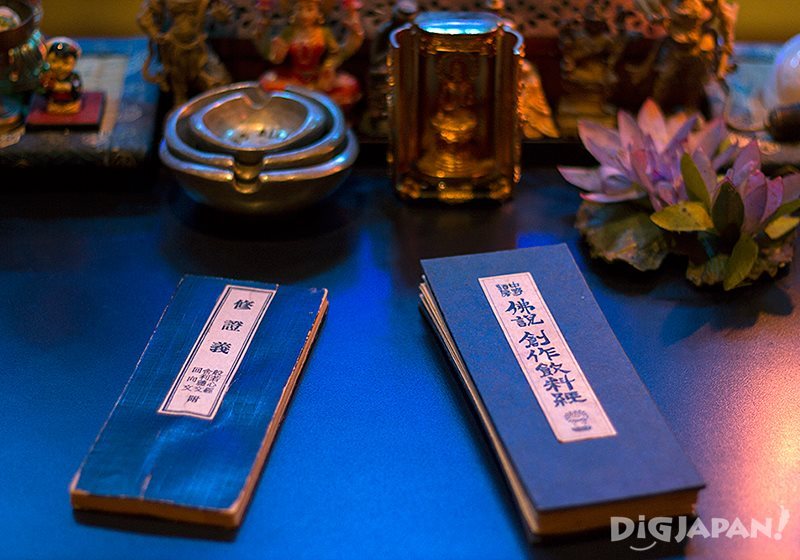 To the left: a sutra. To the right: Vow's menu.

The menu looks almost identical to a sutra, a Buddhist scripture book, and it features a variety of Buddhism-themed original cocktails.

You can order drinks such as Gokuraku Jodo, "Amitabha's land of ultimate bliss", and Shogyomujo, "the impermanence of worldly things". 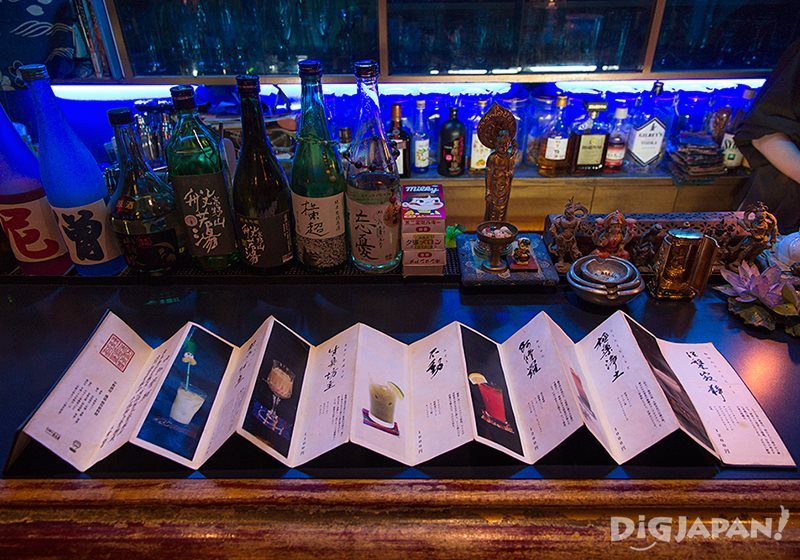 Not all cocktail names have deep or serious meanings though; Namagusabouzu, "mundane priest" made me raise an eyebrow and I had to stifle a laugh when I saw a cocktail named Ero-bouzu, which means "pervert monk". 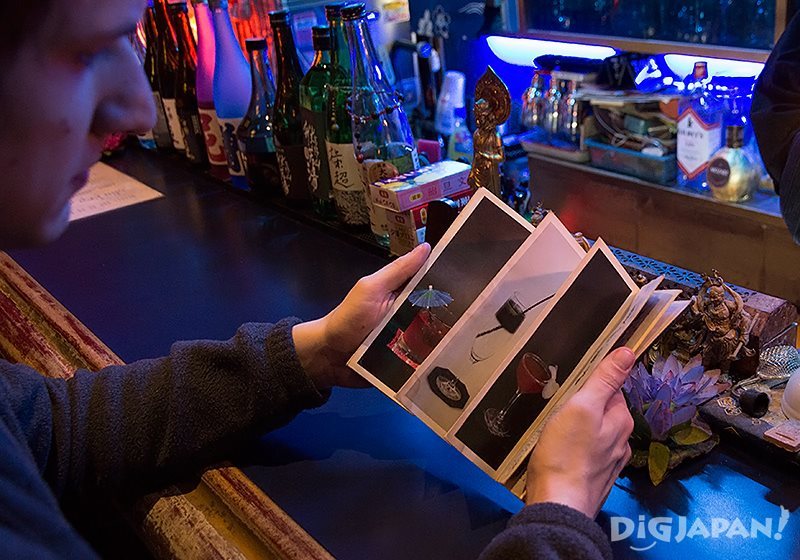 "People are often a bit nervous when they first come to the bar," Genko-san explains, "they don't know what to expect. So we make some jokes to help them feel more at ease."

I agree. I felt a little intimidated when I first came in, but now I know that monks have a sense of humor! 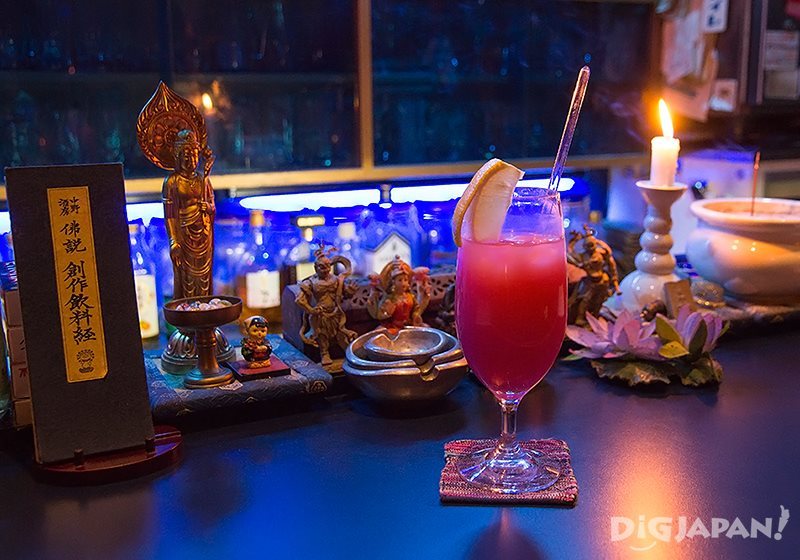 The first cocktail that we ordered is named after one of my favorite Japanese concepts, Ichi-go ichi-e. It means "one time, one meeting". Every moment in our life is unique and will never be repeated.

Of course, the main ingredient of  Ichi-go ichi-e is strawberry, which is called ichigo in Japanese. Get it? 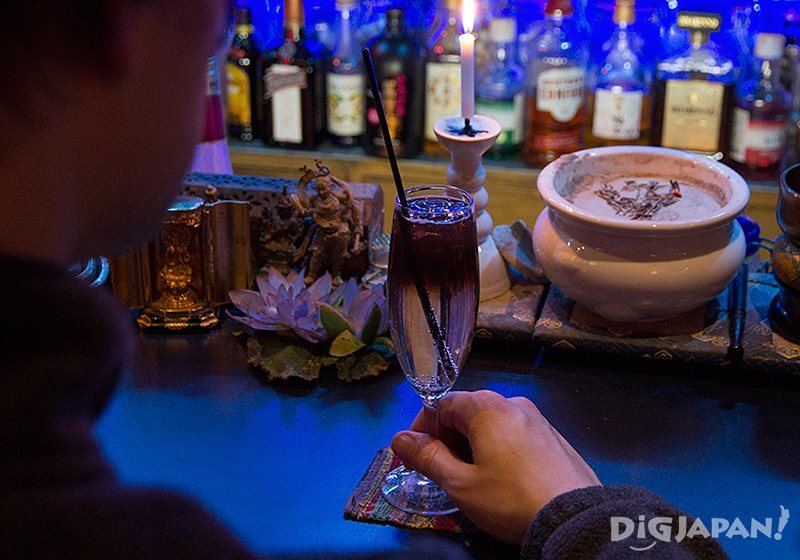 After that, we tried Shikisokuzekuu, which means "form is emptiness". This idea is at the base of the Buddhist philosophy. The drink offers a stunning visual and I think it represents the concept perfectly. 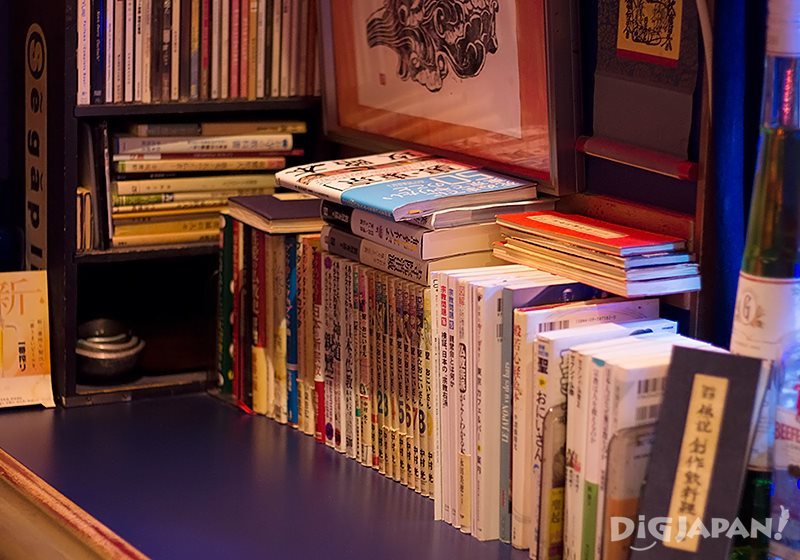 There are books and manga in a corner, free for everyone to read, all related to Buddhism. 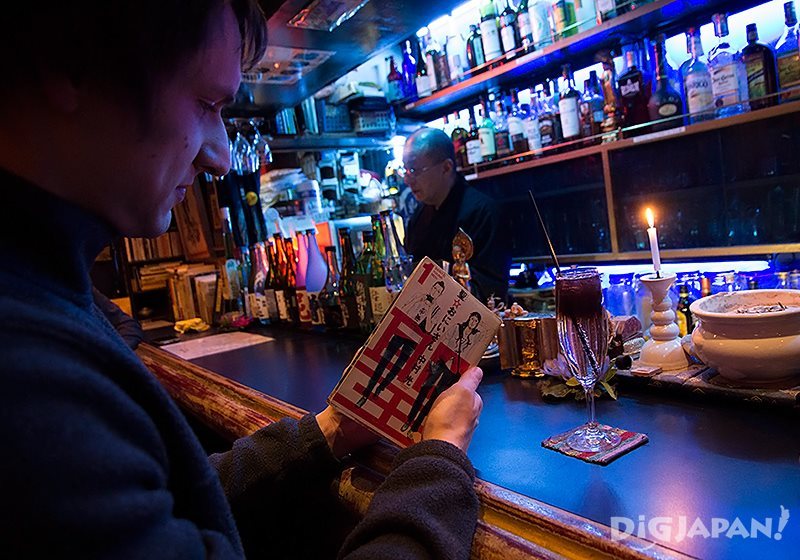 I've always wanted to read this manga, Saint Oniisan! It's a story about Buddha and Jesus descending on Earth and sharing an apartment in Tokyo. The author of the manga has visited this bar. 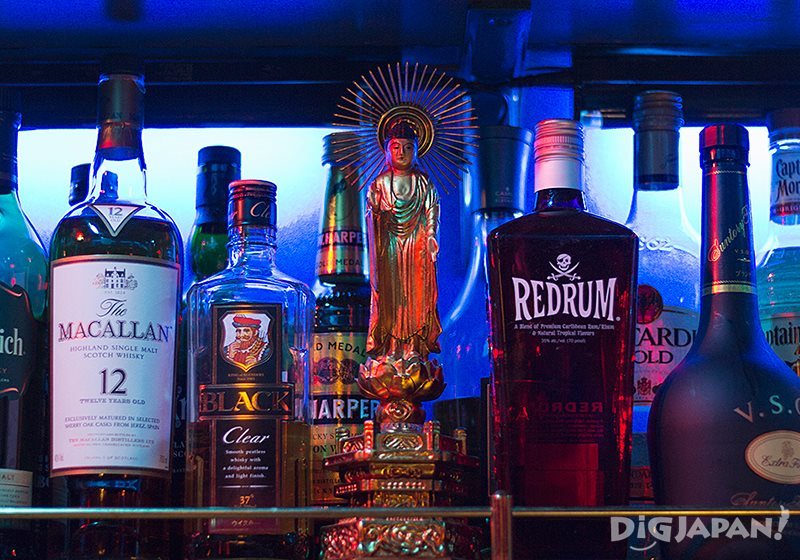 A statue of Amitabha (Buddha) surrounded by bottles, oversees the bar. Customers often mistake it for a bottle and ask what kind of alcohol it contains.

Vow's bar is named after the Four Great Vows of Buddha: to save all people; to renounce all worldly desires; to learn all the teachings; and to attain perfect Enlightenment.

"It also kind of sounds like bouzu, the Japanese word for monk, in Japanese," adds Genko-san with a chuckle. 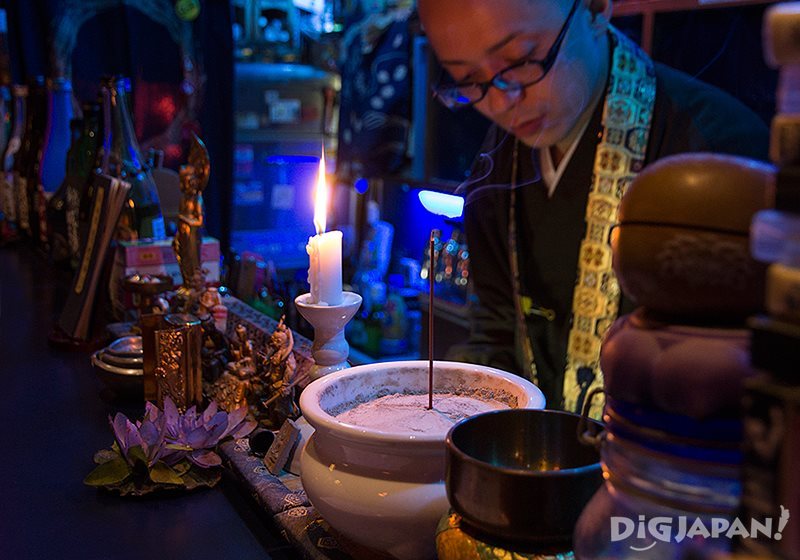 Shamon Yuya, another monk who helps running the bar.

Other monks from different Buddhist sects also work at Vow's. I met one of them, Shamon Yuya, a monk of the Shingon sect.

He knows many things about Buddhism, Japanese culture and history. He told me about Sanskrit words that are used in daily Japanese, the story behind the deer of Nara, and how Japanese culture influenced Buddhism in Japan.


In the Heart of the Corrupt Metropolis 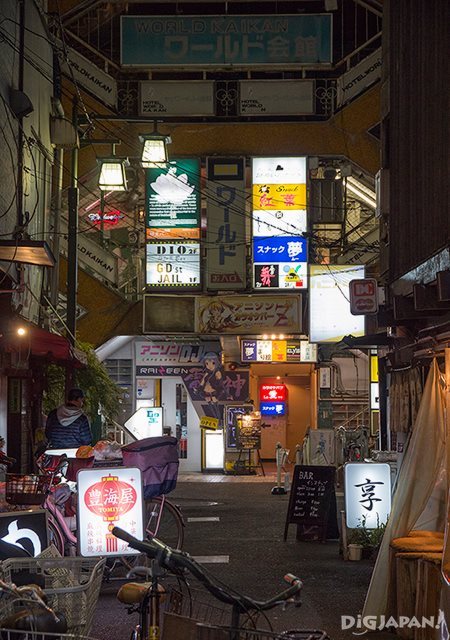 Vow's can be found just a couple of blocks away from the bustling shopping complex of Nakano Broadway. Here, towering over the smoky back alleys is World Kaikan, a half-century-old 5 story building with a peculiar hexagonal structure. The building hosts a handful of other establishments such as a karaoke bar, a rock bar and several snack bars. 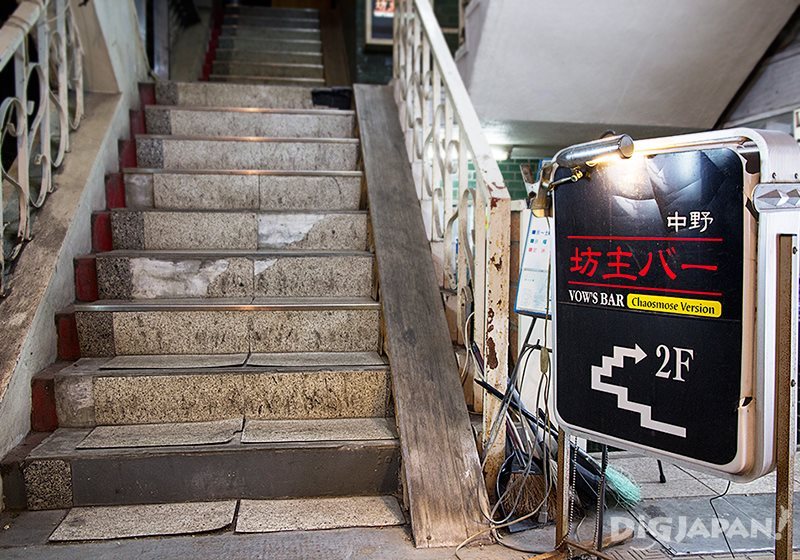 The aura of decay, the peeling walls, broken elevator, and abandoned neon signs are in great contrast with the coziness and peacefulness of Vow's. Entering the monk bar feels like you're stepping into an otherworldly place where you can seek redemption.

In 2014, a "sister bar" called Niso bar (priestess bar) was opened in the nearby district of Koenji.

About the author
Laura is an Italian living and working in Tokyo. She loves exploring hidden and unknown places, taking pictures and listening to Punk Rock music. When she’s not busy doing the above, she might enjoy a craft beer or play the sanshin (an Okinawan instrument similar to a shamisen).

THIS ARTICLE IS BASED ON INFORMATION FROM 03 03,2017 Author：DiGJAPAN! Editorial Team

Order a Cocktail from a Monk at Vow's Bar in Nakano | DiGJAPAN!