Tamagawa Sake Brewery, Where People and Snow Unite to Make the Perfect Sake

Uonuma, a City With a Lot of Snow Even in March

Uonuma city in Niigata prefecture is an area where more than 3 meters of snow fall. I visited at the beginning of March, when spring is just starting in Tokyo, but here at Tamagawa Sake Brewery the snow was still plentiful. 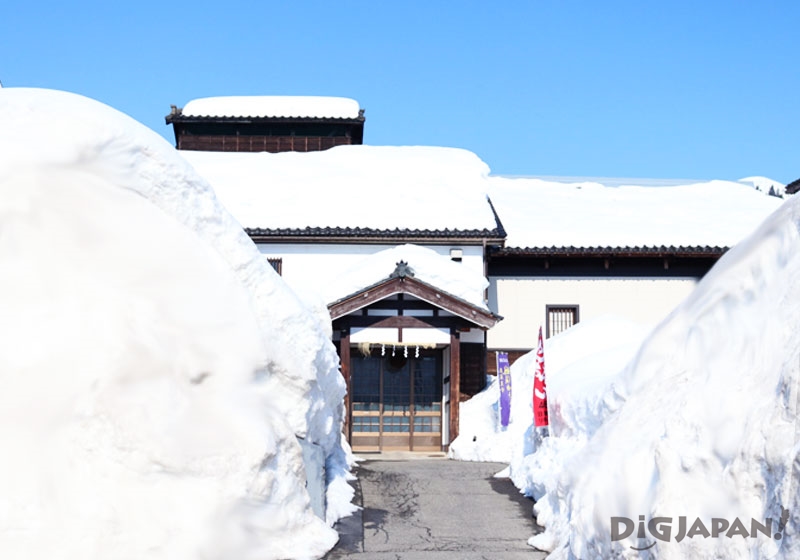 The mounds of shoveled show were 4-5 meters high, forming a wall that towered over me. The entrance to Tamagawa Sake Brewery was surrounded by snow and I could just see a wooden building peering out from behind the white mass.

The History of Tamagawa Sake Brewery

Tamagawa Sake Brewery started their activity around 340 years ago. Even in Niigata prefecture, very few breweries can boast such a long history. The traditional techniques and taste have been passed down and evolved from generation to generation of kurabito, workers skilled in the art of brewing sake. 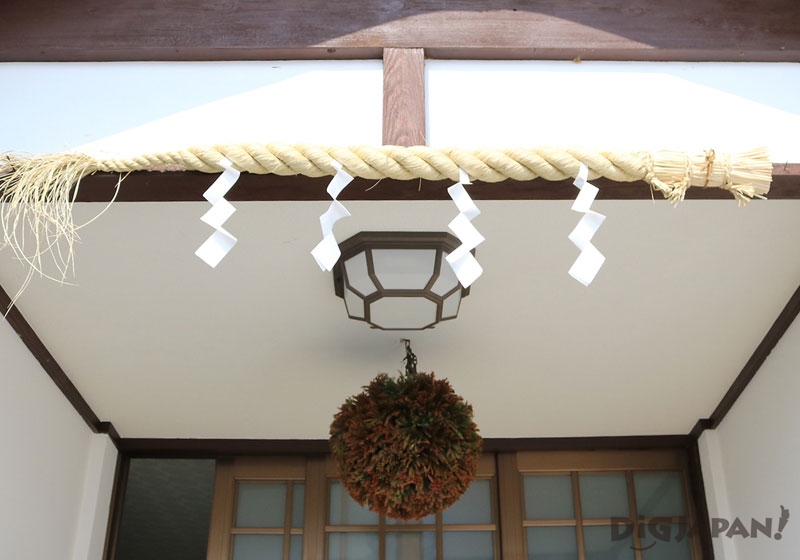 This is sugidama, an ornament made of Japanese cedar leaves. Japanese sake breweries hang it outside to let people know that new sake has been made. Also, by watching the sugidama gradually change color from green to brown, you can tell how long the sake has been left to mature.

The core ingredient of sake is rice. The kind of rice used is called sakamai, literally "sake rice". Here professionals rice farmers and brewers join their forces to produce great sake. The staff from Tamagawa Sake Brewery actually participates in the rice planting and rice harvesting to help the farmers. They believe that knowing their rice thoroughly will allow them to brew a good tasting sake. 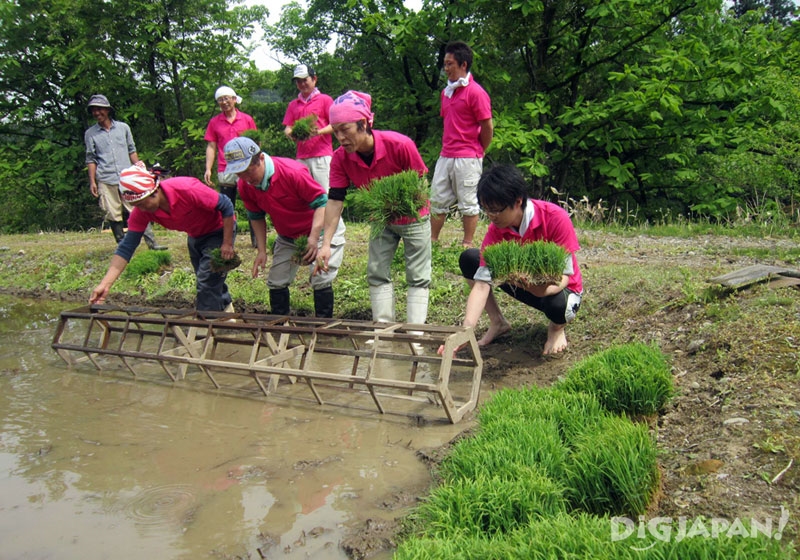 Another important ingredient that really influences the taste of sake is water (mizu). The water used in sake brewing is called shikomi-mizu, literally "preparation water". Tamagawa Sake Brewery uses natural spring water gushing from the nearby mountains. From May to November, when there is no snow, you can see the stream on the brewery's grounds. If you bring a container you can even take some water home. In winter the spring is not visible, but you can taste the spring water at the brewery's sake sampling shop. 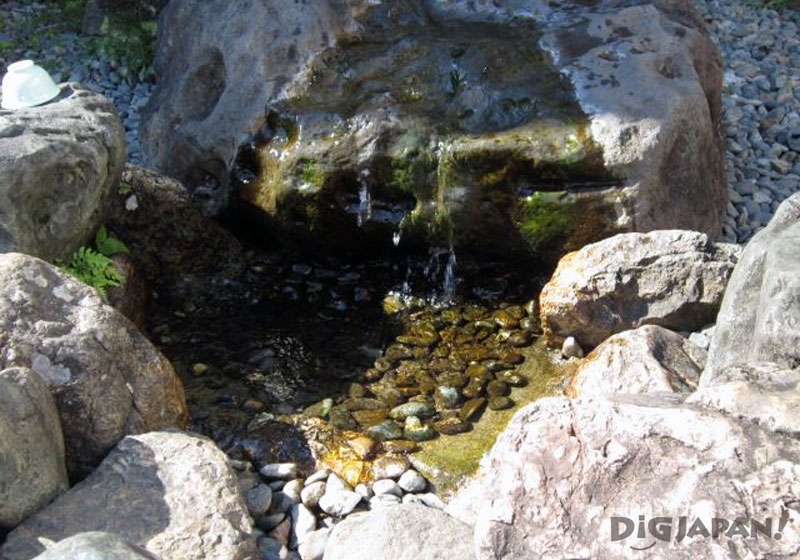 Upon entering the building, I found myself in a the large area called the steaming room. Here the sake rice is washed and steamed. You can visit it from October to March, the period when sake is made. A cold climate is key to brewing good sake, so this process is only done in winter. 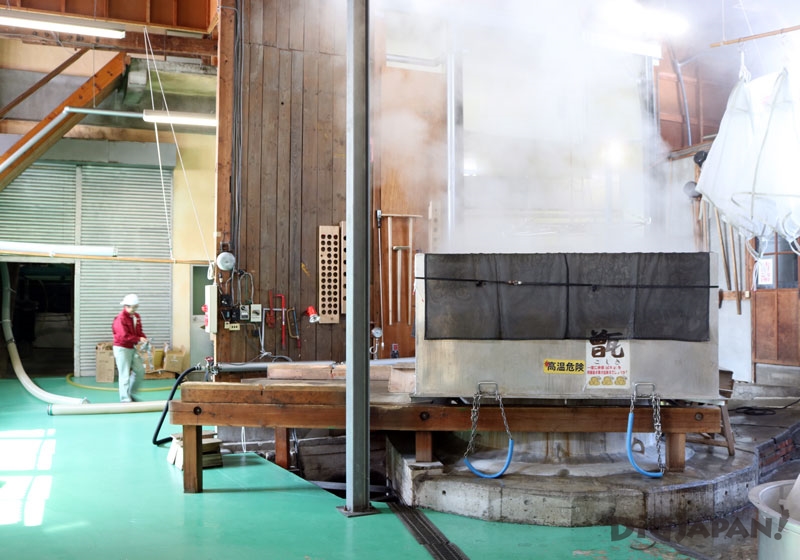 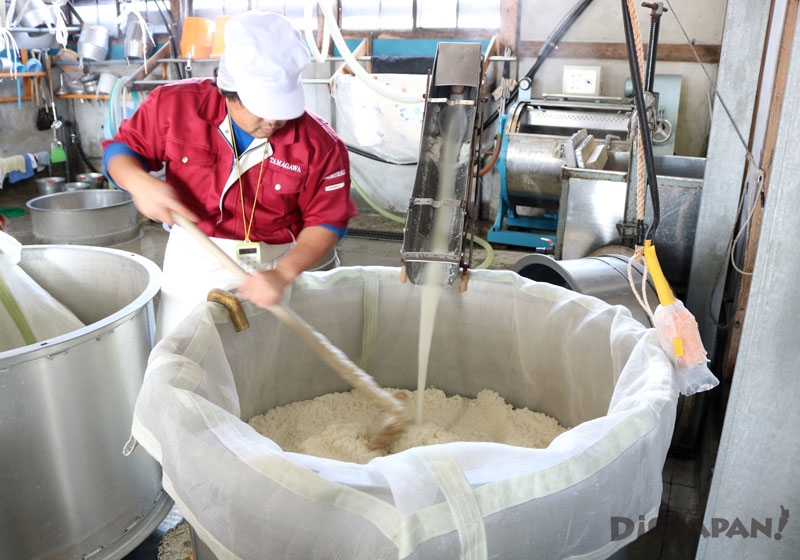 The rice washed the previous day was then transferred to a steaming basket over an iron pot filled with boiling water. Each basket can contain about one ton of rice. That's roughly 20 bags of rice. The steaming process takes about 80 minutes. Time varies slightly depending on the type and quantity of the rice. 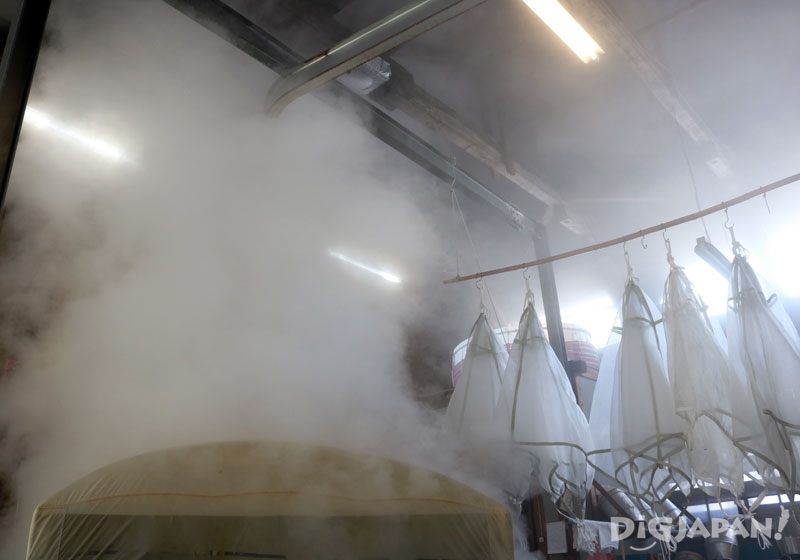 I was surprised to hear that the steaming room is actually a reconstructed elementary school gym and it has been used for more than 90 years. The ceiling is made of a grid structure to let the steam through. 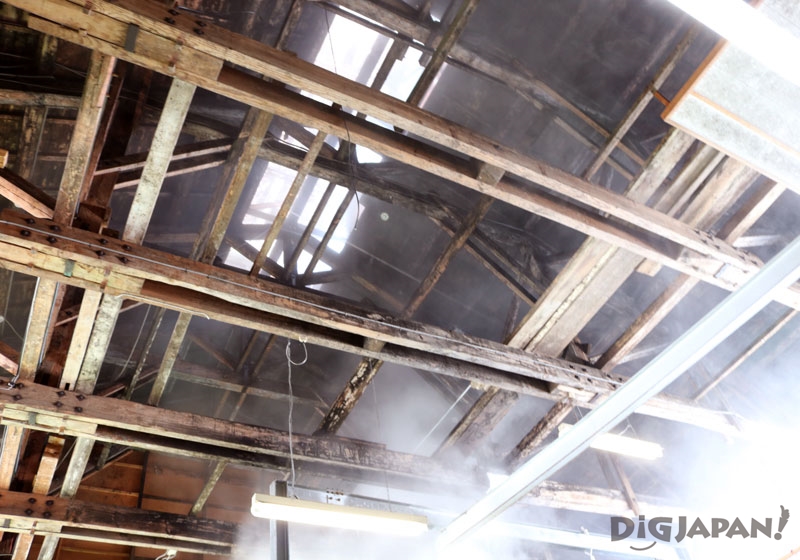 The freshly steamed rice was hung onto a machine and lifted out of the basket. It was then left to cool down until it reached a specific temperature. The moment the rice came up, a big cloud of vapor bathed me in the rich smell of nature. 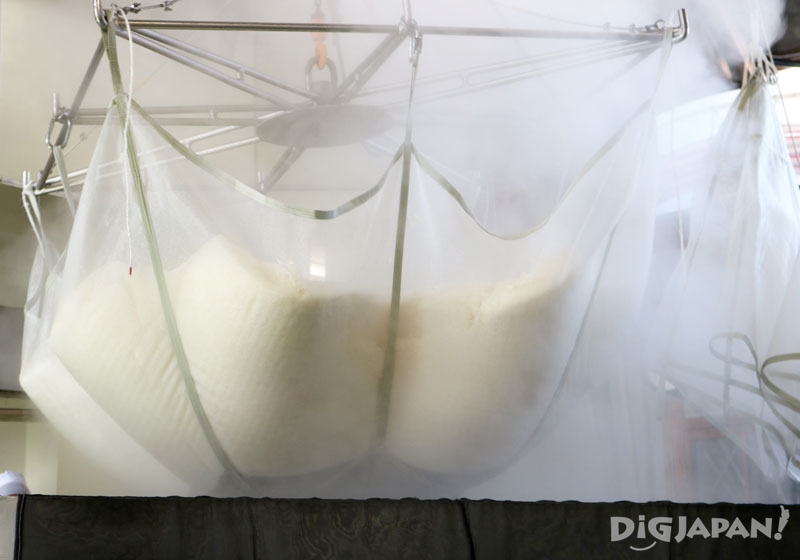 The Preparation
The sake rice was then transferred to a tank and stirred by the expert hands of the kurabito. Stirring a tank filled with rice, water and koji (a fermentation starter) is really hard work. But this is a very important step in the brewing of good sake.

This process is very dangerous and can't be viewed during the tour.

"Sake brewing is like a living thing. That's why it doesn't always turn out the way you think it will," said Wada-san, one of the kurabito. Having inherited the experience and tradition of sake brewing, only the kurabito can keep brewing sake maintaining the same taste. They achieve this by observing the performance of the rice, the climate and the condition of the sake. 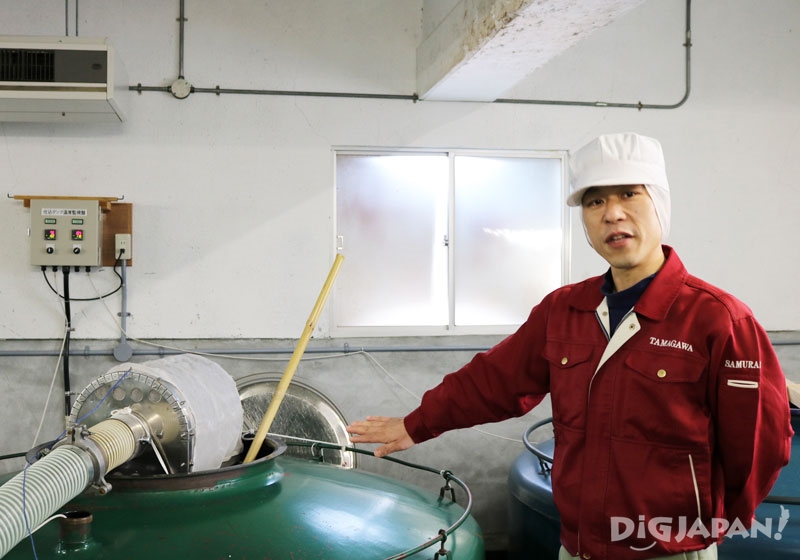 I have learned that brewing excellent sake takes a great amount of time and many different processes. When all these processes are completed, spring is ready to arrive at Tamagawa Sake Brewery.

The Sake Storehouse
Walking past the steaming room I found the storehouse. This building has been in use for more than 160 years. Entering it felt like a dive into the past. 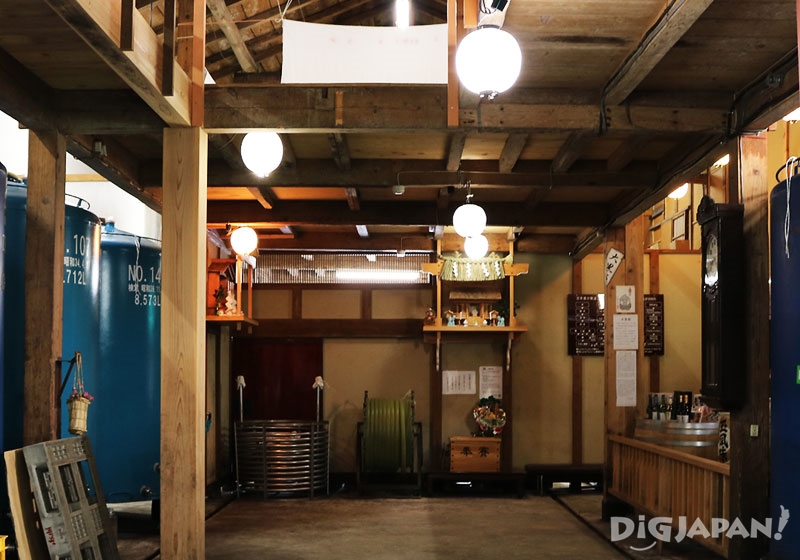 The beams on the ceiling form a solid structure made to support the heavy snow. 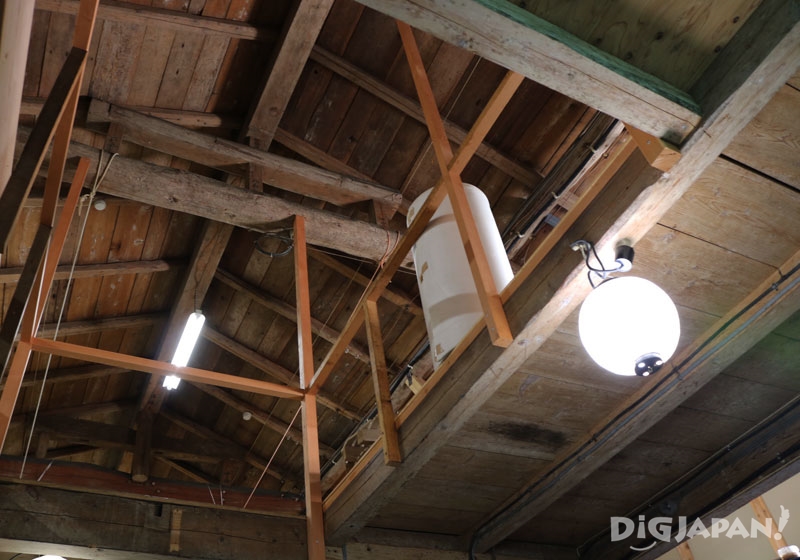 This sign explains the sake brewing process in both Japanese and English. 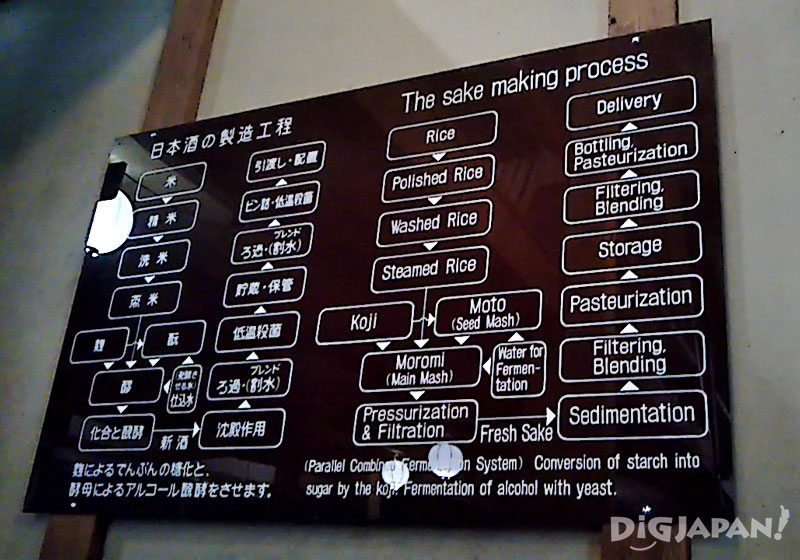 A Refrigerator Provided by Nature

At Tamagawa Sake Brewery part of the sake is stored in a natural refrigerator called the "snow cellar". This cellar is covered with snow and it retains a temperature of 2-3°C throughout the year. When the weather gets warmer, the snow is covered with a sheet to keep it from melting. The 5 meters that I saw will be reduced to a half in the summer, but the snow will keep covering the cellar keeping it cool until the return of the cold in November. 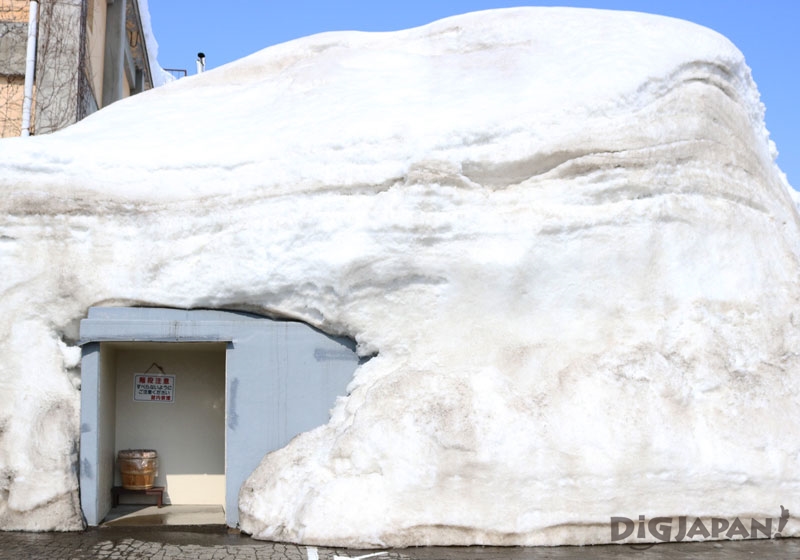 Walking down the stairs leading to the cellar I thought I was entering a secret hideout! 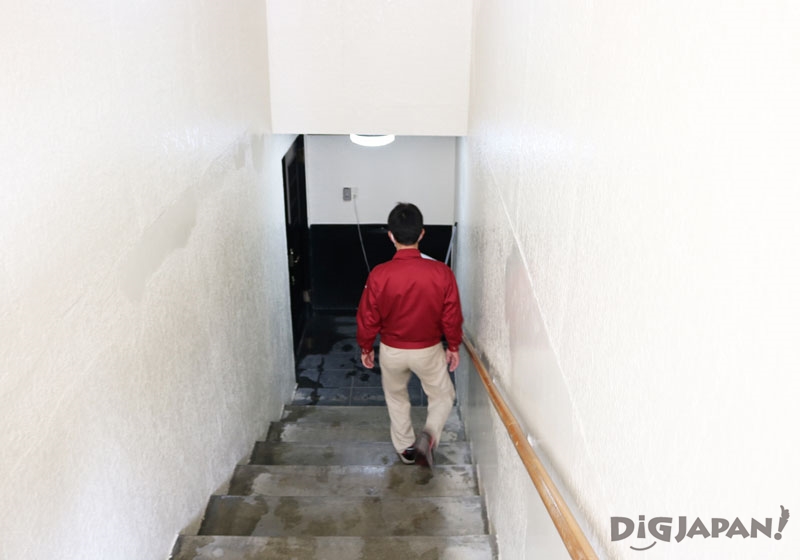 The cellar was wrapped in a gentle chill. Protected by the snow, the sake aging in here develops a mild, round taste with a mature tinge. It's a special sake from this land of heavy snow, made with the aid of nature. 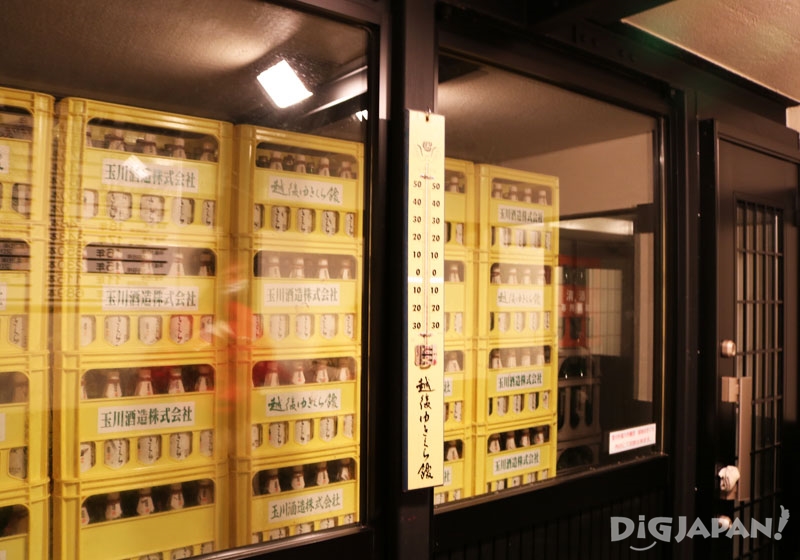 The Sampling at Last! Enjoying 10 Different Kinds of Sake

I'm sure you'll agree that sampling is the main thing to look forward to in a brewery tour! At Tamagawa Sake Brewery you can sample 10 different kinds of sake. 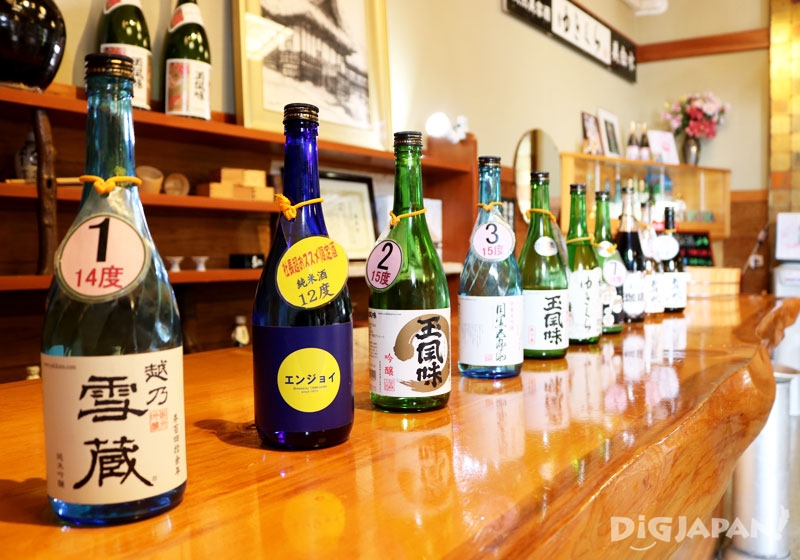 Despite the small size of the glasses, after 10 tastings I had downed about 360ml of sake! Learning how it was made gave the sake a special taste. 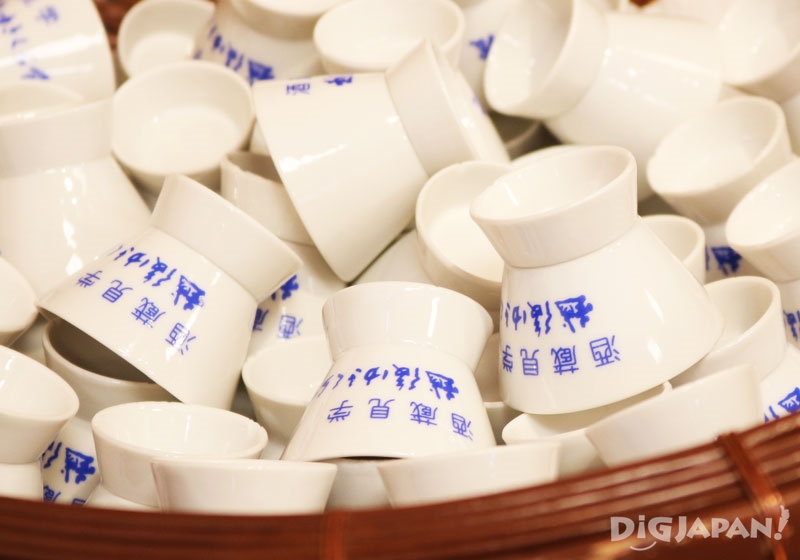 The happi coat is a Japanese straight-sleeved coat that has a long story dating back to the Edo period. It was embroidered with the family crest or the name of one's business. Nowadays they are usually worn at festivals. 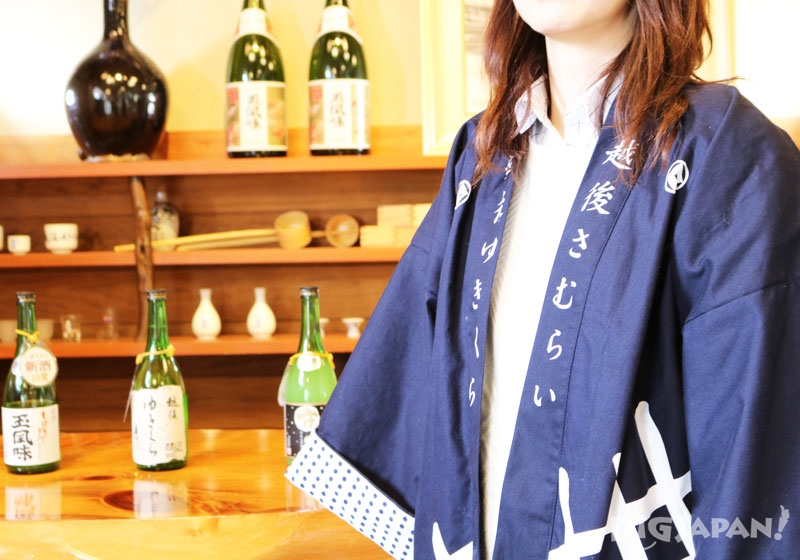 I also drank the spring water used in the sake brewing. In winter the outside spring is covered, so you can taste the water here in the shop. 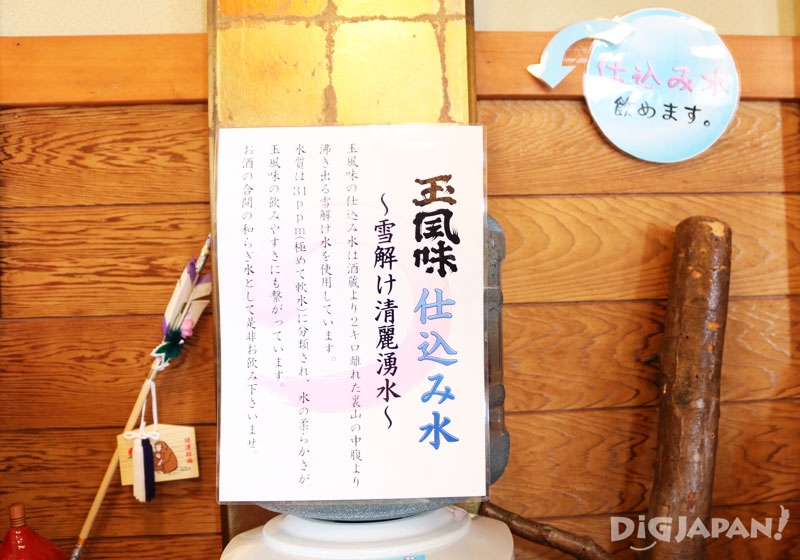 The Charm of the Sake Brewery Protected by the Snow

By witnessing the uninterrupted passing of the sake brewing knowledge, you can deeply understand the tradition and food culture of Japan. This is the charm of Tamagawa Sake Brewery. I definitely recommend you try this sake brewing tour.

It's possible to visit the brewery even by yourself at any time within the working hours. However, contacting in advance will grant you a better experience. You can contact the brewery by phone or by sending a message to the Echigo Yukikura-kan Facebook page. No translation is provided for foreigners, but the staff will guide you with the aid of an electronic translator.
Pictures: Ayako Hoshi, Tamagawa Sake Brewery, Inc.

Local Correspondent
Ayako Hoshi
Residing in Niigata, Niigata prefecture
"I want to let the world know about the wonders of my hometown Niigata!" With this passionate thought Ayako shines as an accomplished web writer. She covers a wide variety of topics including festivals, shrines, hot springs, food and of course sake. With the confidence of a local, she provides detailed coverage of her personal recommendations for travelling in Niigata.

THIS ARTICLE IS BASED ON INFORMATION FROM 05 22,2017 Author：DiGJAPAN! Editorial Team