The period from July to mid-September is summer festival time in Japan. In this article I'd like to introduce you to what are called the Three Great Festivals of the Tohoku* Region. These are the Aomori Nebuta Festival, the Akita Kanto Festival and the Sendai Tanabata Festival. If you happen to visit Japan in summer, these are events that are worth seeing at least once in your life.

*Tohoku is the northeastern portion of Honshu, the largest island of Japan.

Watch Gigantic Floats Parade Around Town During This Energetic Festival 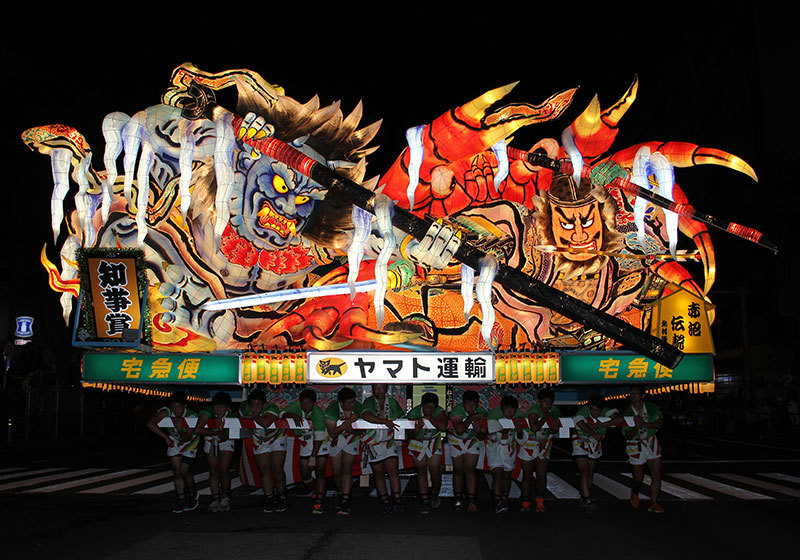 
The Nebuta Festival is held in the city of Aomori, Aomori Prefecture from August 8th to 7th. Hosting about 3,000,000 visitors every year it is Japan's largest summer festival. It was also designated as one of Japan's Important Intangible Folk Cultural Properties. 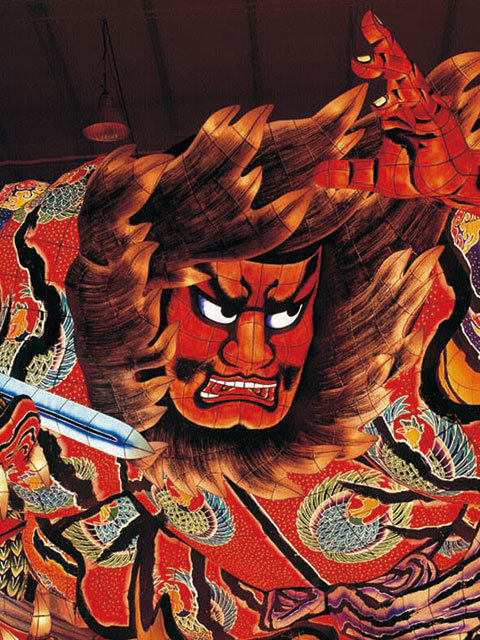 The highlight of the festival are the nebuta, gigantic lantern floats that are lit from the inside and parade around the city at night. Crafted by skilled experts, they are shaped like famous historic characters or scenes form kabuki plays.
Each nebuta has a very strong expression and a dynamic feel, you almost expect them to start moving. 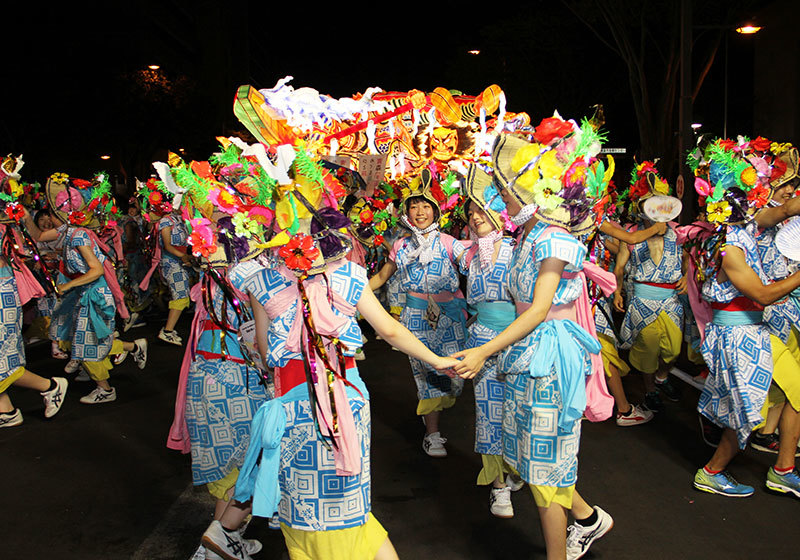 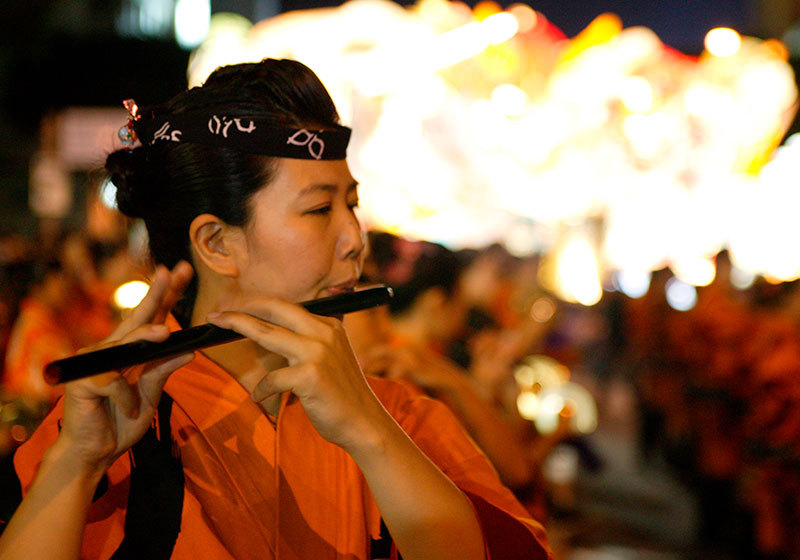 Nebuta can be up to 5m tall, 9m wide and 8m long. They are accompanied by special dancers called haneto and musicians called hayashikata that cheer the parade with taiko drums, flutes, and other instruments. During the parade the whole town echoes with music and the cheerful yells of "rassera, rassera" while the excitement never stops. 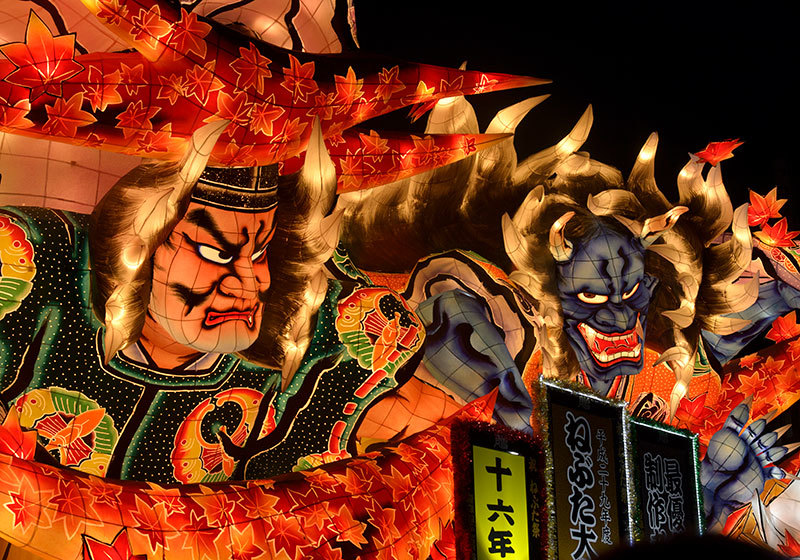 You can see the event for free by finding a spot on one of the streets where the nebuta are paraded. However, the streets get extremely crowded so you might want to grab a ticket for the paid seats. This way you'll be sure not to miss anything and you'll have a nice place to sit.
Tickets are usually sold starting from late June. Check out the official site for more information (ticket information is published around mid-June). 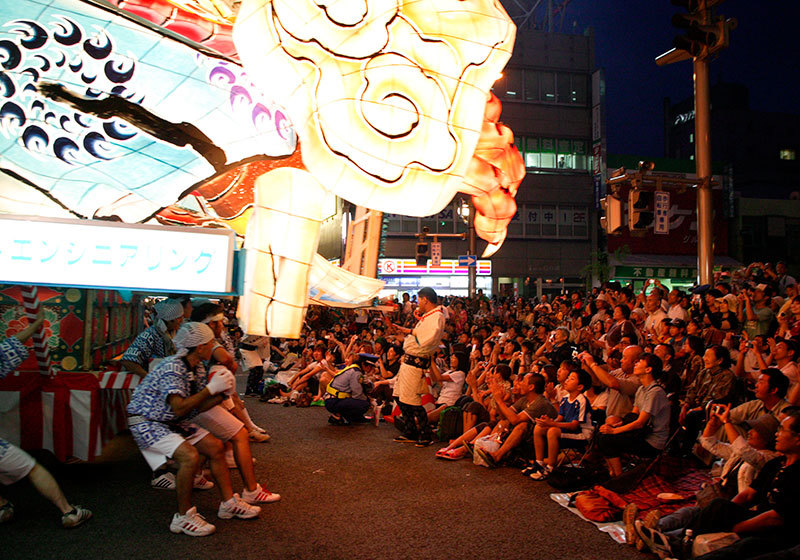 Since the roads are so crowded I would advise you stay in one spot rather than trying to follow the nebuta. There are some especially popular spots where the nebuta actually stop and perform little shows like rotating or moving around. These spots include the front of the Aomori Prefectural Office, the Japan National Route 4, and various crossroads.

In narrower streets like Shinmachi-dori the nebuta come very close to visitors, making the whole experience even more intense. 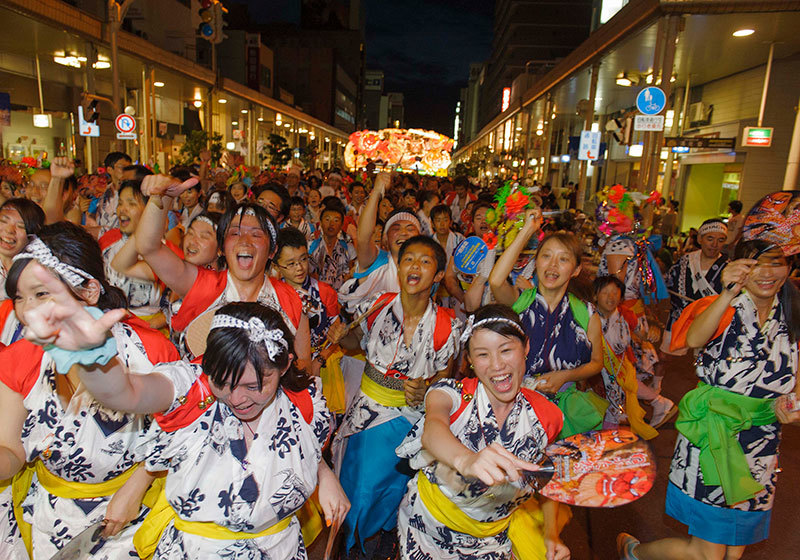 If you want to enjoy the festival even more, you can actually participate as a haneto dancer! Anyone wearing the official nebuta outfit is allowed to participate in the dance. The outfit can be rented at several stores around town.  It consists of a special yukata and a conical adorned hat called hanagasa. They'll even help you get dressed up.

Just make sure you arrive to the starting point of the parade at least 10 minutes before the start and join one of the groups. Then all you have to do is have fun! 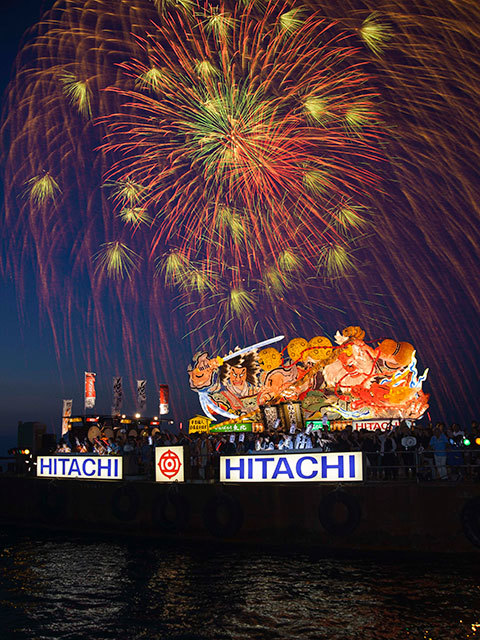 The last day of Nebuta Festival is closed by a firework display. With the fireworks shot from the waterfront while some of the floats are put onto boats and paraded around the bay, this is another must-see event. Tickets to the sea parade and firework display are sold starting from early July. If you want to be sure to see both I recommend getting the A seats tickets. It's possible to watch the fireworks for free, but  the floats might be hard to see if you're not sitting in the paid A seats. 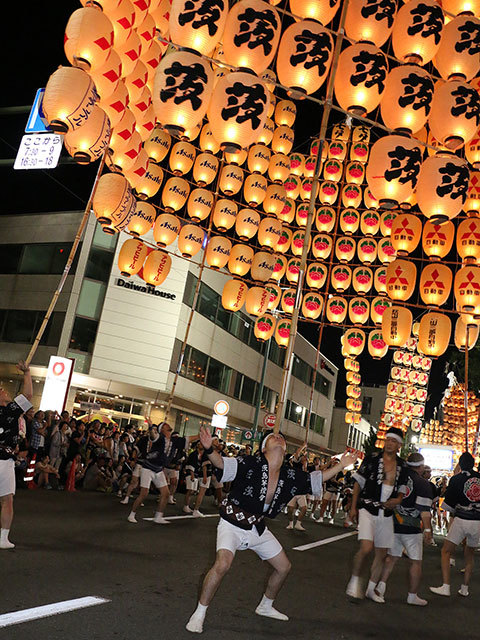 The Akita Kanto Festival takes place in Akita city, Akita prefecture every year from August 3rd to August 6th. During this event a number of performers give an impressive display of maneuvering the kanto, 12m long bamboo poles with up to 46 paper lanterns attached to them. The festival is one of the Important Intangible Folk Cultural Properties and is also considered one of the 3 biggest lantern festivals in Japan.

The Akita kanto Festival is also known as the festival where people pray for abundant crops. You might notice that the shape of the kanto resembles a piece of rice. There are four different sizes of Kanto. The biggest one, Oowaka, is 12m long and weights about 50kg. 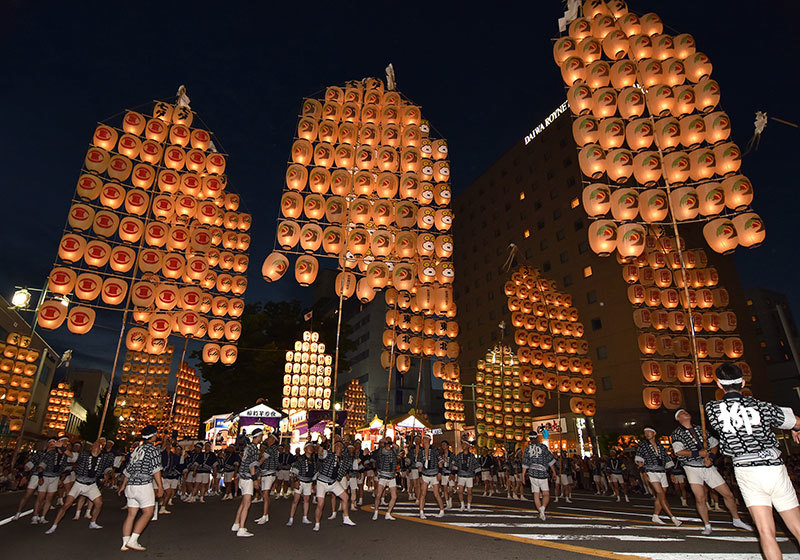 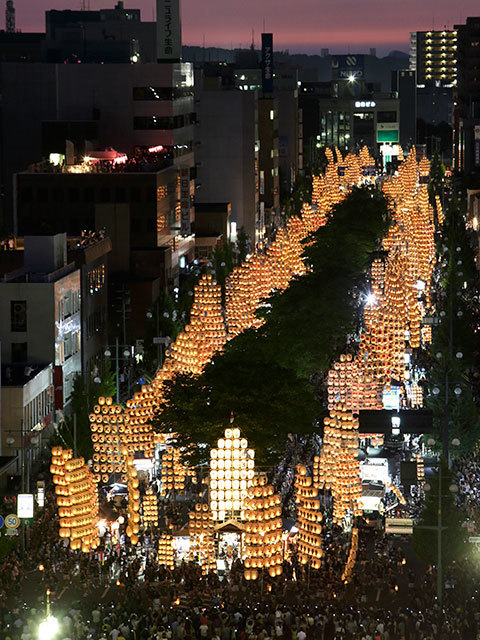 For this event the highlight is the Night Parade. It takes place along the Kanto Odori street, between the Nichomebashi Bridge crossroad outside Akita station's west exit and the Sanno Juujiro crossroad. Around 280 poles holding some 10,000 lanterns are present.
Every pole is hoisted by a single performer called the sashite, accompanied by cries of "dokkoshoi" and music. These men have mastered the art of carrying a kanto and they move around balancing the poles on a single hand, their forehead, shoulder, and hip. Watching these people handling the massive lantern poles by themselves is an unbelievable sight. 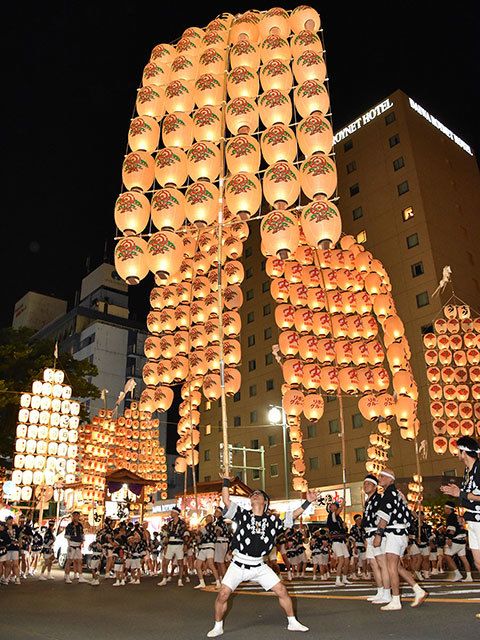 Photo courtesy of Akita City Kanto Festival Executive Committee
While balancing the poles, the performers show their great skill by doing other tricks with their free hand, like waving a fan. The crowds all hold their breath and then burst into applause at their show.

After the performance people get the chance to take a picture with the kanto. 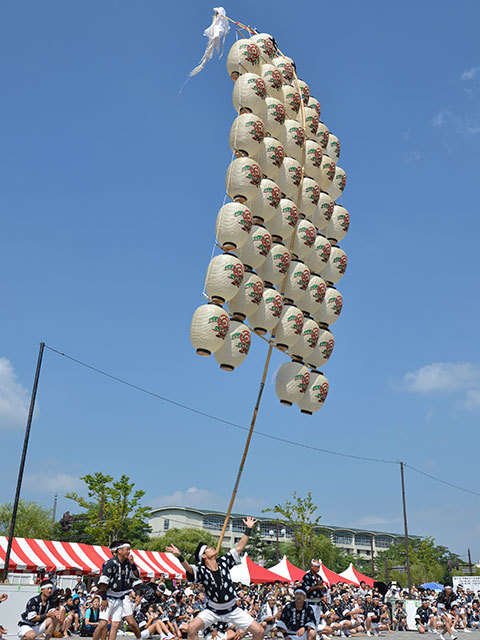 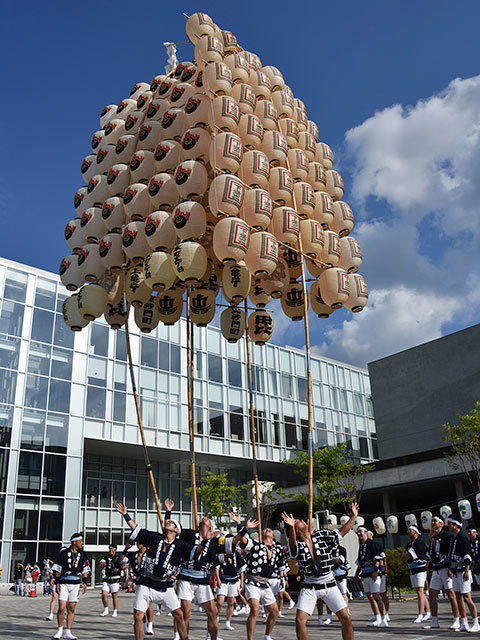 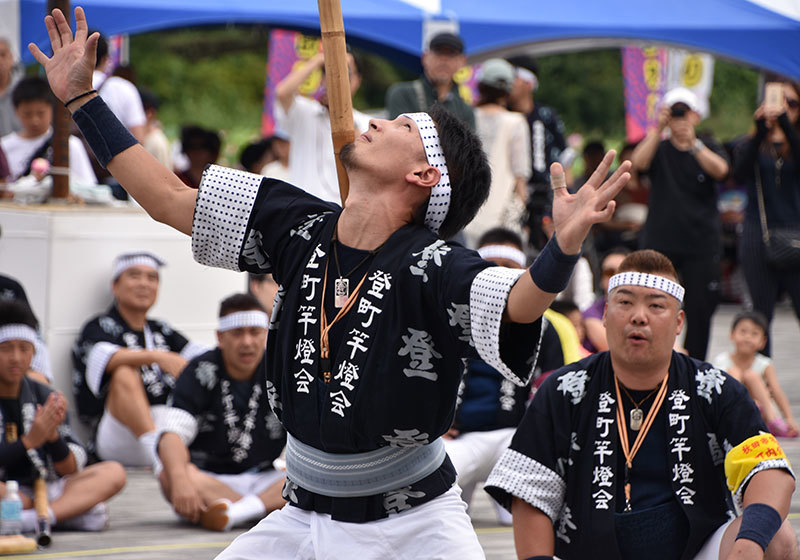 Photo courtesy of Akita City Kanto Festival Executive Committee
During the daytime on the 4th to the 6th another event goes on in a place called Area Nakaichi's Nigiwai Kaijo. The event is called Kanto Myogikai or 'daytime Kanto', and features a skill contest between kanto wielders. Here they really show off their mastery of balance, beauty and stability and you can really see and admire their skill. 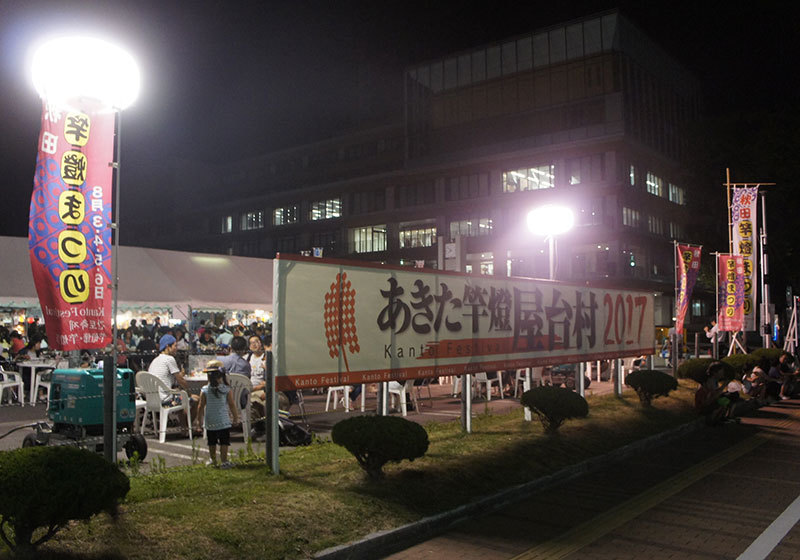 In Agora square outside Akita station's west exit, a miniature kanto corner is set up where everyone can try to carry one for themselves. Also, the parking lot of the Akita City Hall hosts a number of food stalls serving local specialties.
Video courtesy of Akita City Kanto Festival Executive Committee

Elegant Bamboo Decorations Adorn the City in This Traditional Event 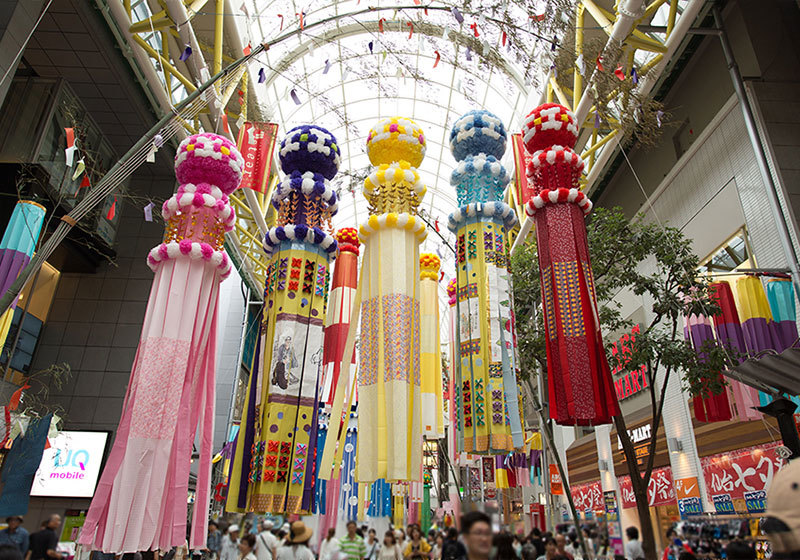 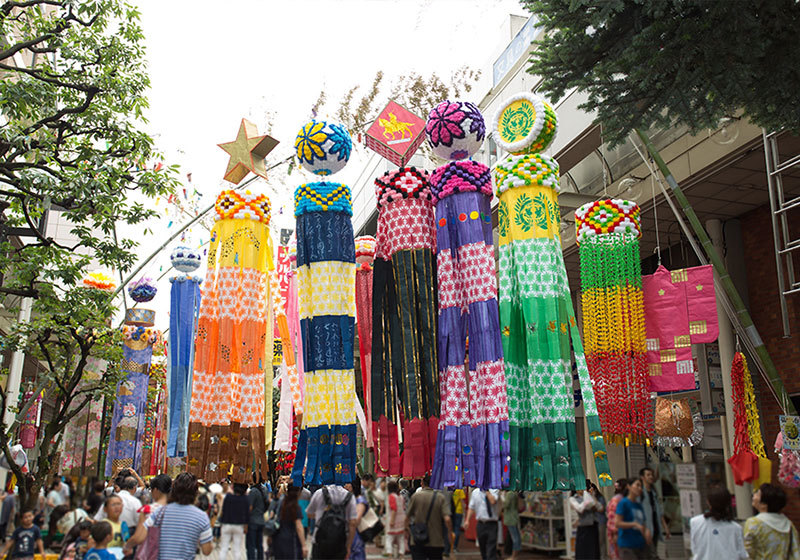 Photo courtesy of Sendai Tanabata Festival Support Association
Tanabata is an event originating from the Chinese legend of the deities Orihime and Hikoboshi (respectively the stars Vega and Altair), two lovers what were separated by the Milky Way and were only allowed to meet once a year, on the seventh day of the seventh month. To celebrate this day, every year on July 7th Japanese people write their wishes on thin strips of paper called tanzaku and hang them on bamboo.
Sendai's feudal lord Date Masamune himself  encouraged this tradition, and in Sendai the Tanabata is celebrated following the lunisolar calendar. 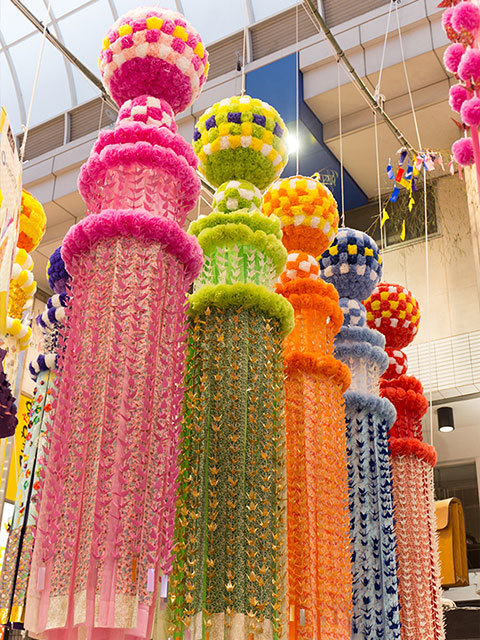 Photo courtesy of Sendai Tanabata Festival Support Association
The streamers are crafted by local shops, schools and other groups. During the festival, around 3,000 streamers decorated with objects like paper cranes and coin pouches adorn the city.

These streamers look gorgeous! It is customary to hang five of them to one long bamboo pole. The streamers can be 5 to 10 meters long. They look so delicate and finely crafted, and being able to see them up close the details are amazing. 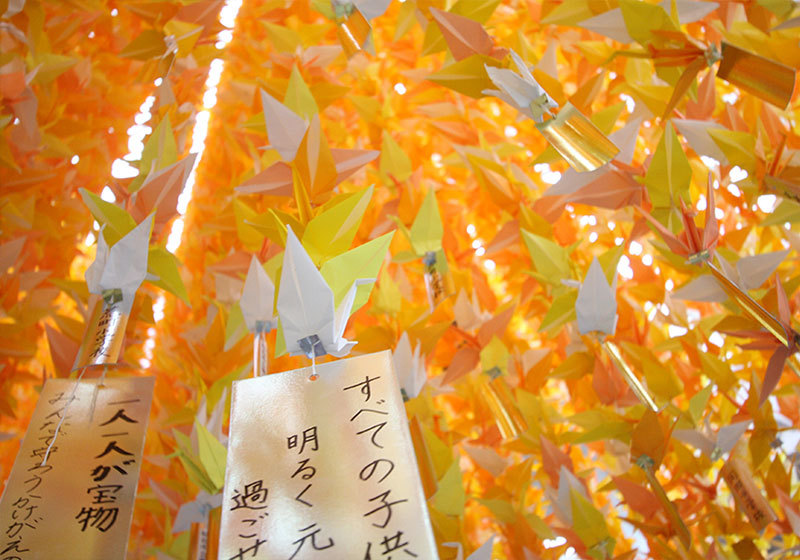 The Tanabata streamers are decorated by 7 objects, each with a specific meaning.

Paper strips: for calligraphy and school improvement
Paper kimono: for warding off illness and misfortune, also for sewing skills
Paper crane: for home safety and longevity
Money pouch: for good business
Net: for abundant harvest and fishing
Trash basket: for cleanliness and economy
Windsock: for weaving skills and handicrafts 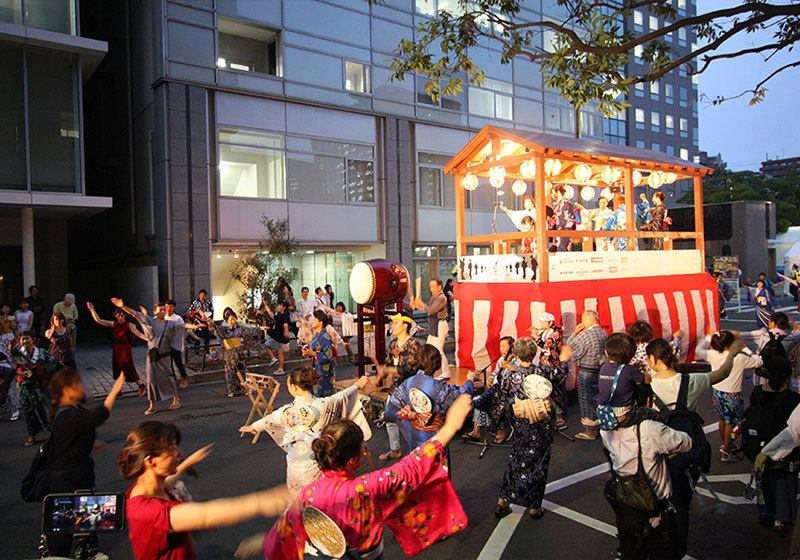 Photo courtesy of Sendai Tanabata Festival Support Association
Video courtesy of Sendai Tanabata Festival Support Association
If you visit, be sure to also check the various events being held during the festival period. Kotodai Park's public square changes its name to 'Festival Square' and hosts events like taiko performances, bon odori dances and kids activities. Of course there are also plenty of food stalls serving Sendai specialties like beef tongue. 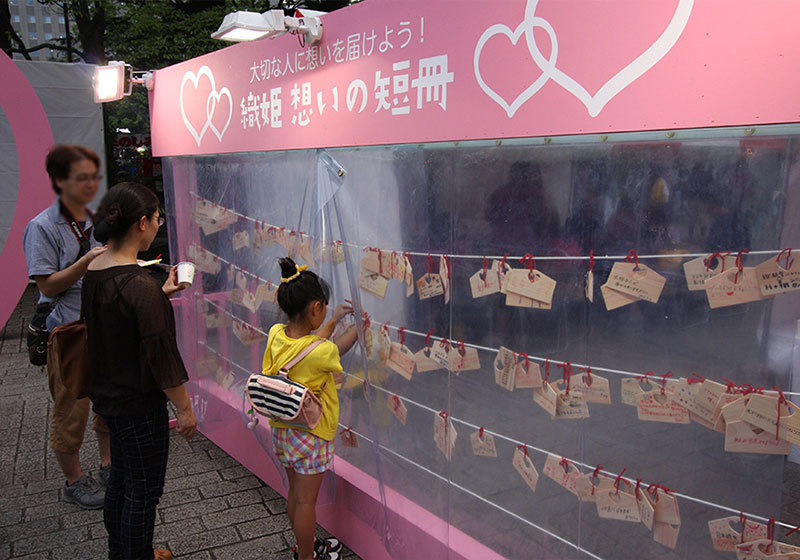 Photo courtesy of Sendai Tanabata Festival Support Association
Very popular among girls is the 'Orihime's wish tanzaku' corner, where you get to write your love wishes on tanzaku paper strips. After the festival the paper strips are transferred to the city's shrines.

On August 5th, the day before the festival,  the Sendai Tanabata Fireworks Festival is also held, so that's a good reason to come earlier.

All of these festivals take place in early August, they are close to the main station and super easy to access! The dates are also fixed so they're easy to add to your travel plan. I highly recommend you check out at least one of the Three Great Festivals of the Tohoku Region if you get a chance!

*The above article is based on a coverage made on June 2018.
*The schedule and places are subject to change. Please check each event's official website before your visit.

THIS ARTICLE IS BASED ON INFORMATION FROM 07 12,2018 Author：DiGJAPAN! Editorial Team