What is the Echigo-Tsumari
Triennale?

Giant metal flowers usually don’t come to mind when you think of farming, and yet there it is. It sits in Niigata, a prefecture in Japan famous for delicious rice, its red and orange petals unfurling outwards as its periwinkle blue tendrils reach for the sky. It may sound a little strange, but this is only one example of the many artworks you’ll see in the region as part of the Echigo-Tsumari Art Triennale 2015, a triennial art event held in the Echigo-Tsumari Art Field.

Reviving the Echigo-Tsumari Area Through Art 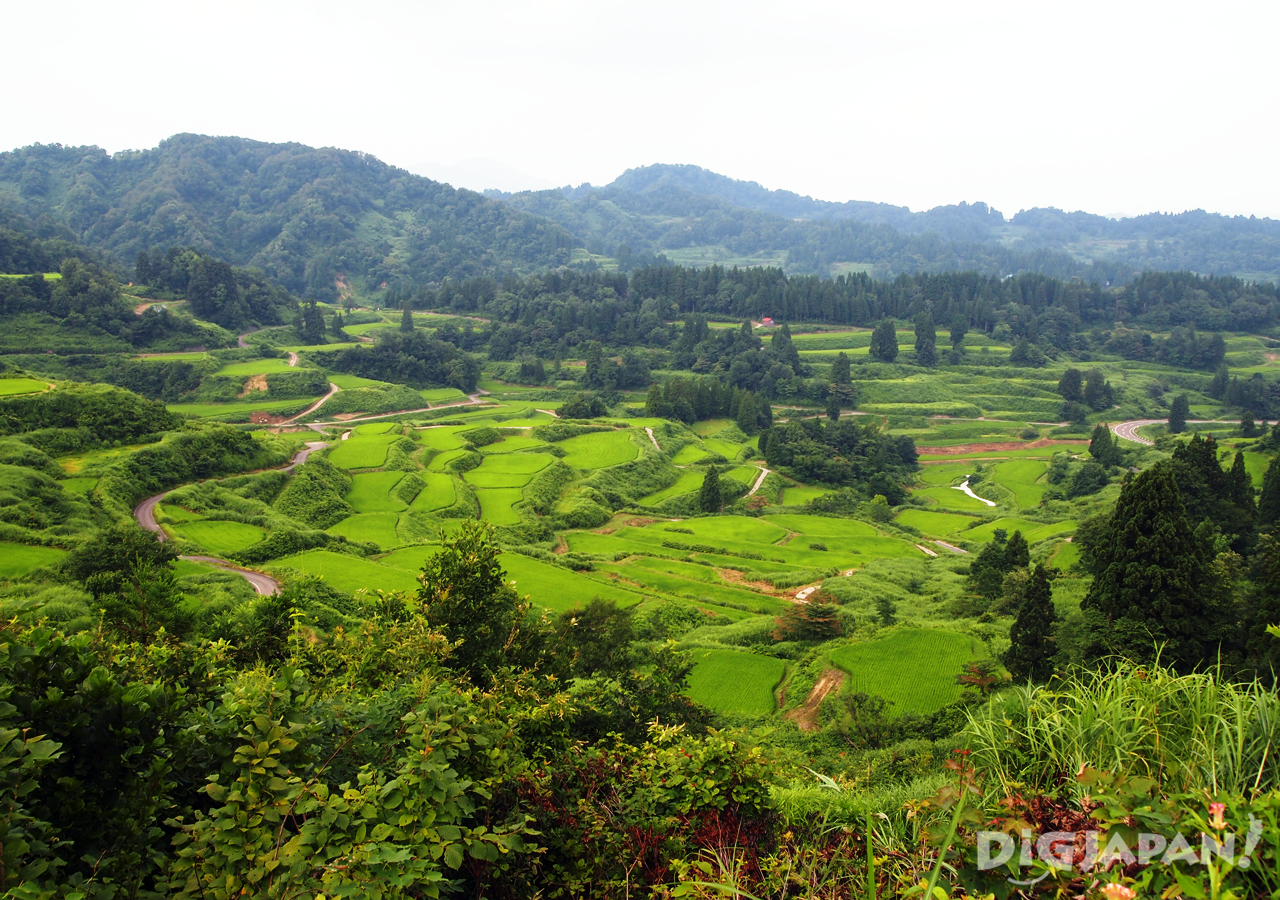 Japan today faces a unique problem. Fewer children are being born. Furthermore, those children born in rural areas tend to move to cities in their adult lives. As a result, you get towns with dwindling populations where more than half of the residents are over the age of sixty-five. The visible effects of these phenomena are sobering. Towns and villages get combined for lack of residents. Schools close for lack of children, their empty shells interspersed here and there among rice fields and stunning mountains. All this has an effect on the residents, too. They’ve watched their town and their way of life begin to age, thin, and ultimately disappear. As a result, they were beginning to lose their genki, that necessary energy that makes life worth living. 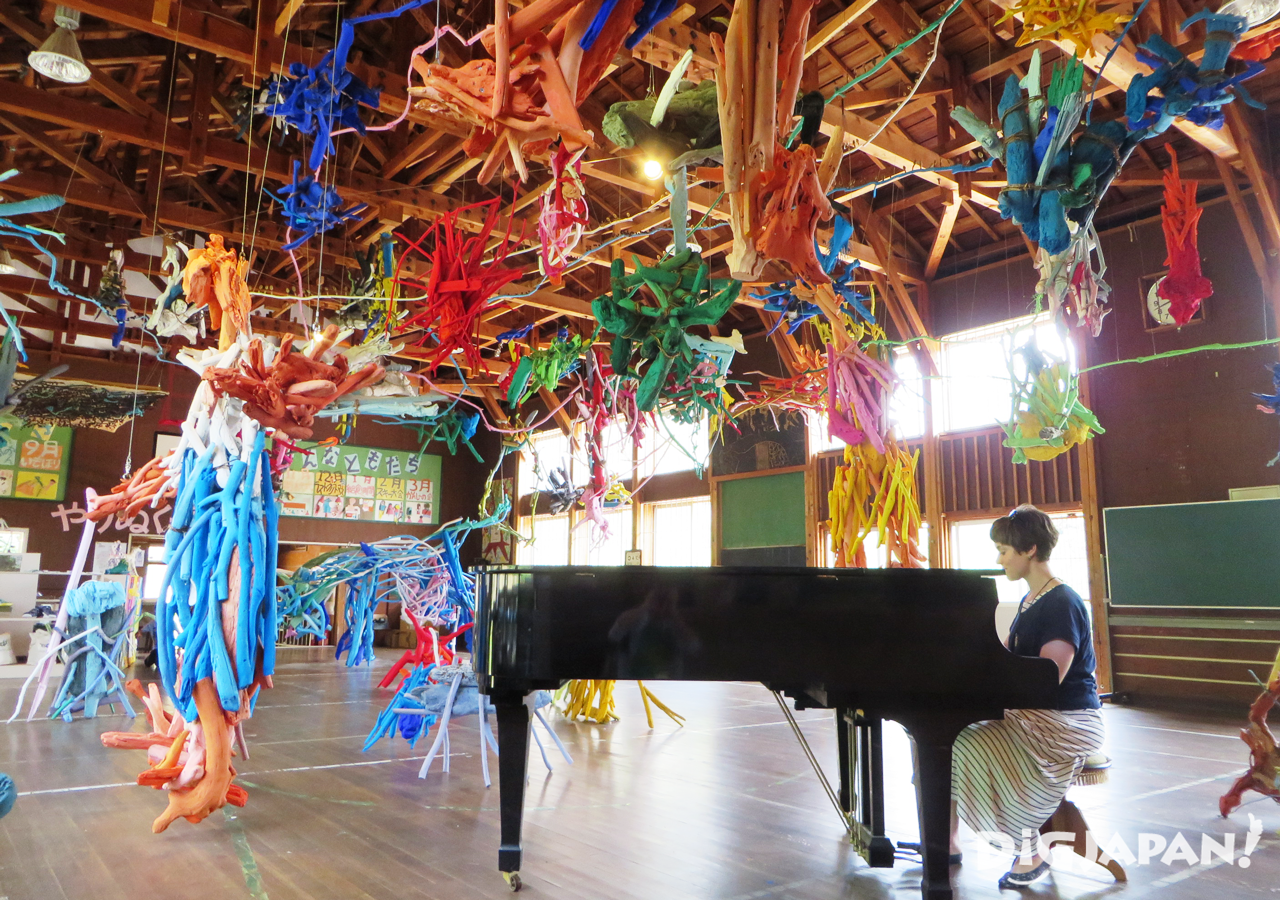 There were only three students still enrolled at Sanada Elementary School when it closed in 2005, thus ending its 130 year history. Thanks to the Triennale, the entire school has been re-opened as a walk-in picture book based on the story written about those last students by Japanese picture book artist Seizo Tashima. There's also a cafe inside.

In 1996, Niigata-native and graduate of Tokyo University of the Arts Fram Kitagawa had an idea: use modern art to showcase the charms of the Echigo-Tsumari region to increase local tourism. Though the unusual idea was initially met with skepticism from the local residents, the artistic efforts in the area eventually grew into the first Echigo-Tsumari Art Triennale in 2000. 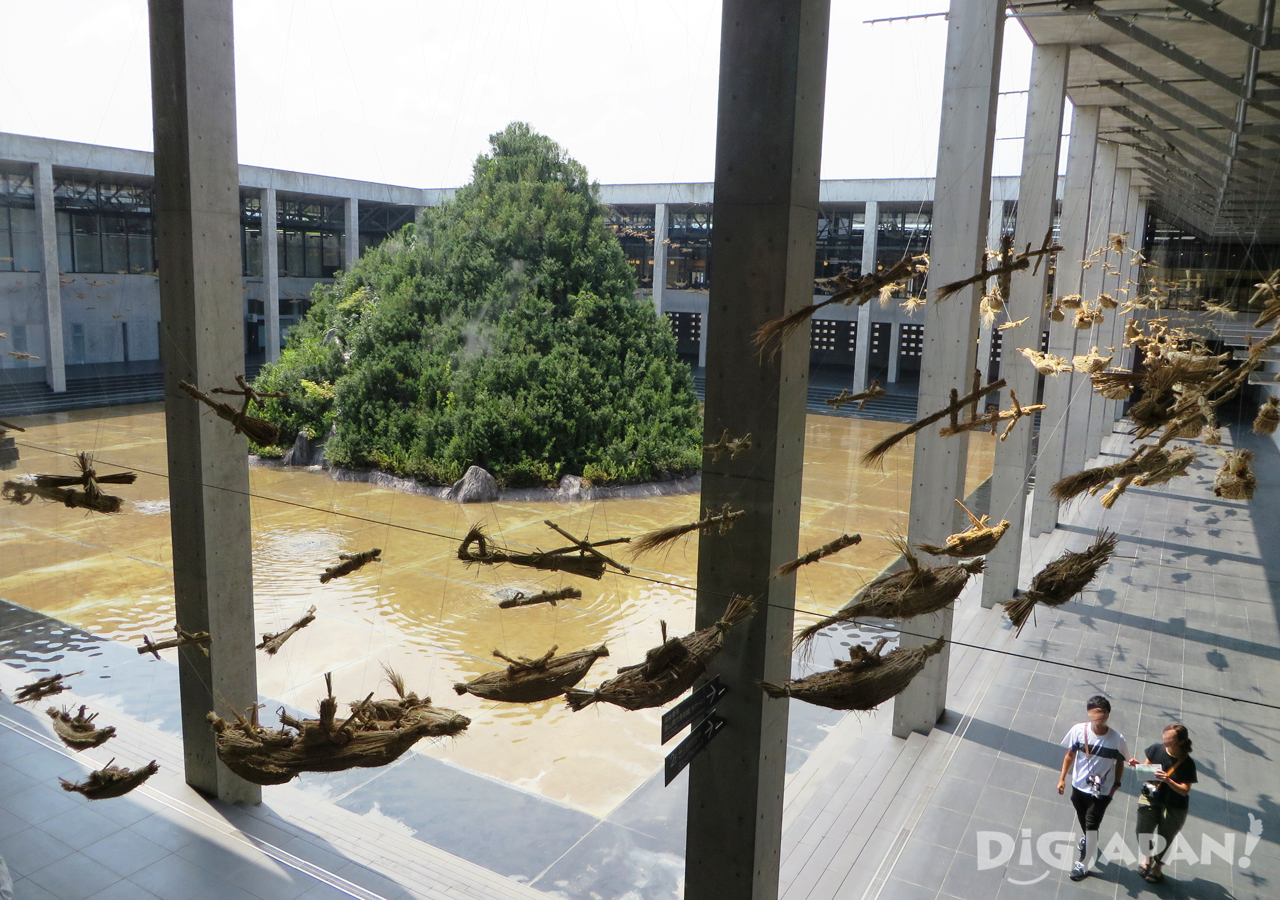 To make a long story short, it’s working. The Echigo-Tsumari Art Triennale is now one of the largest art festivals in the world, attracting guests in the hundreds of thousands; the previous Triennale in 2012 had an attendance of 488,848. Over the past twenty-years leading up to this year’s Triennale, nearly 1,000 works of art have been produced, some of which are permanent installations. Among these works include those by artists from such places as China, Taiwan, France, and the United States. 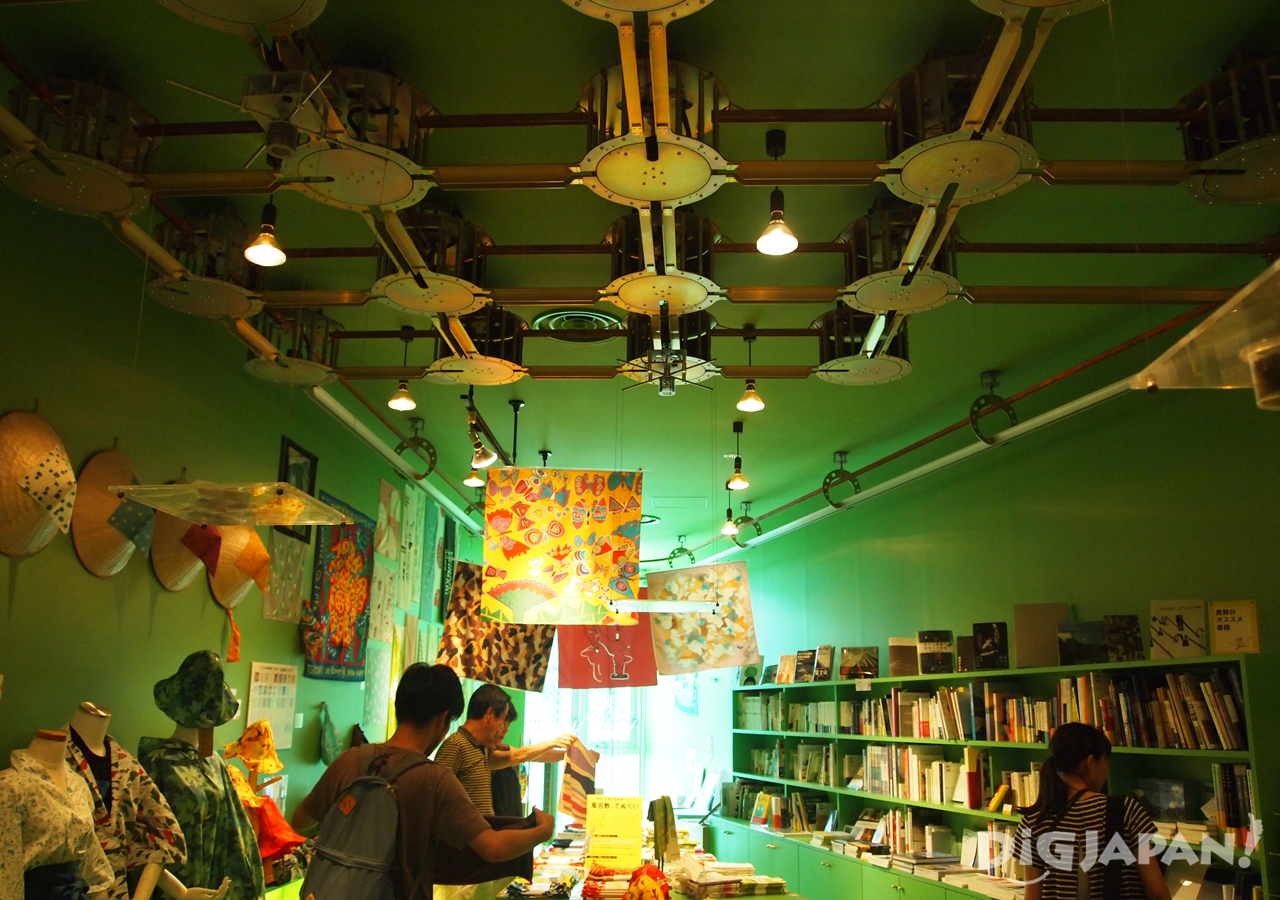 The museum shop inside the Matsudai Nobutai. It was designed by Japanese artist Tatsuji Ushijima as a piece of art in and of itself titled Unite / Move around / Workings. Inside you can find souvenir goods as well as local specialties of the Echigo-Tsumari area.

What makes the Triennale so compelling is the relationship between the art and the land. The Echigo-Tsumari area is not merely the backdrop for art; rather, the artists who participate in the Triennale have used the area as part of their artwork. By doing so, they have highlighted the inherent charms of the landscape and local culture, creating an exhibition unlike that of anywhere else. This has helped to rekindle a sense of pride and purpose among the local residents, many of whom volunteer at the various art sites. 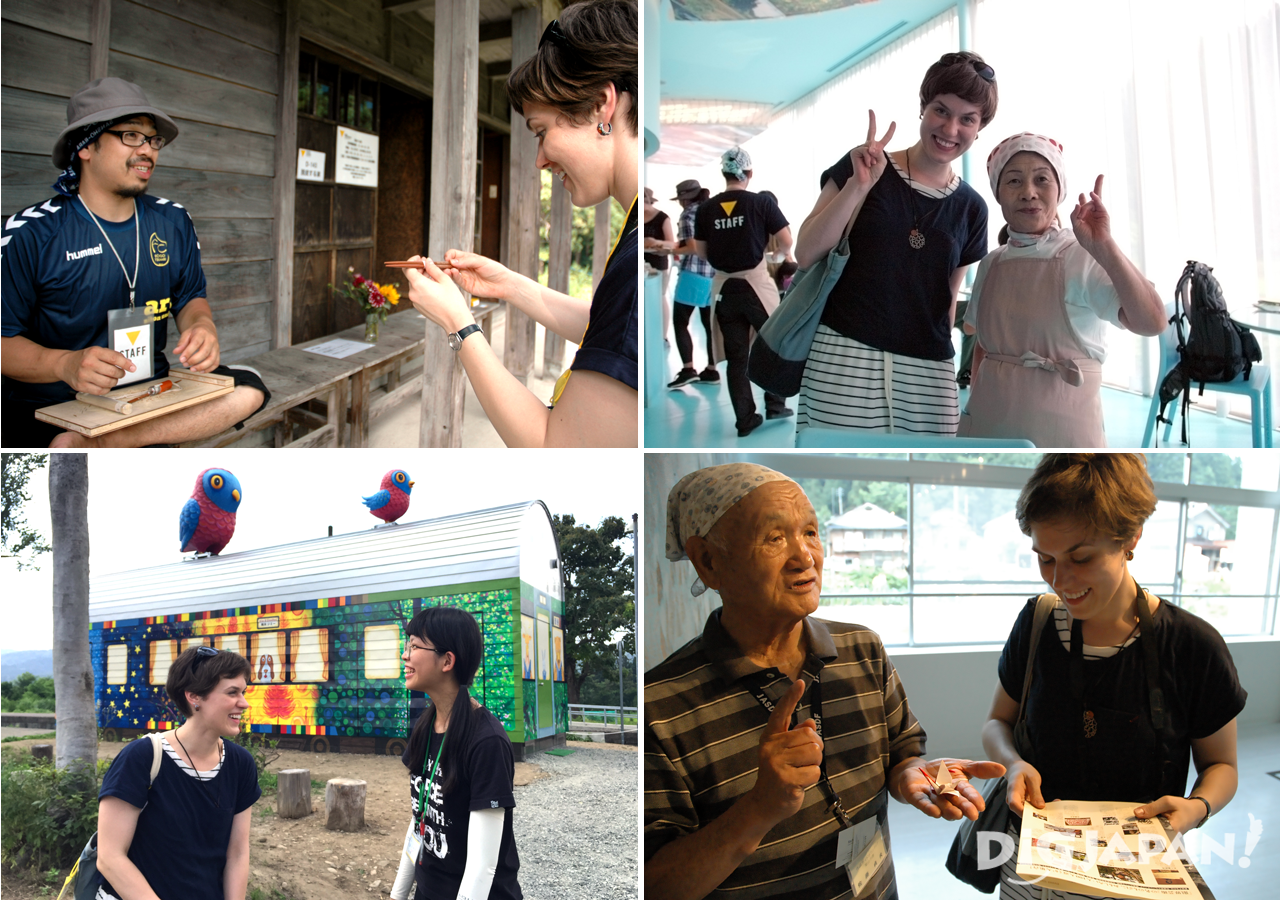 Some of the volunteers at the Echigo-Tsumari Art Triennale 2015

By visiting the Echigo-Tsumari Art Triennale, one has not only the opportunity to see impressive works of art, but also to experience a side of Japan that cannot be found in large cities or typical tourist destinations. As it only takes place once every three years, it’s an opportunity that should not be missed. 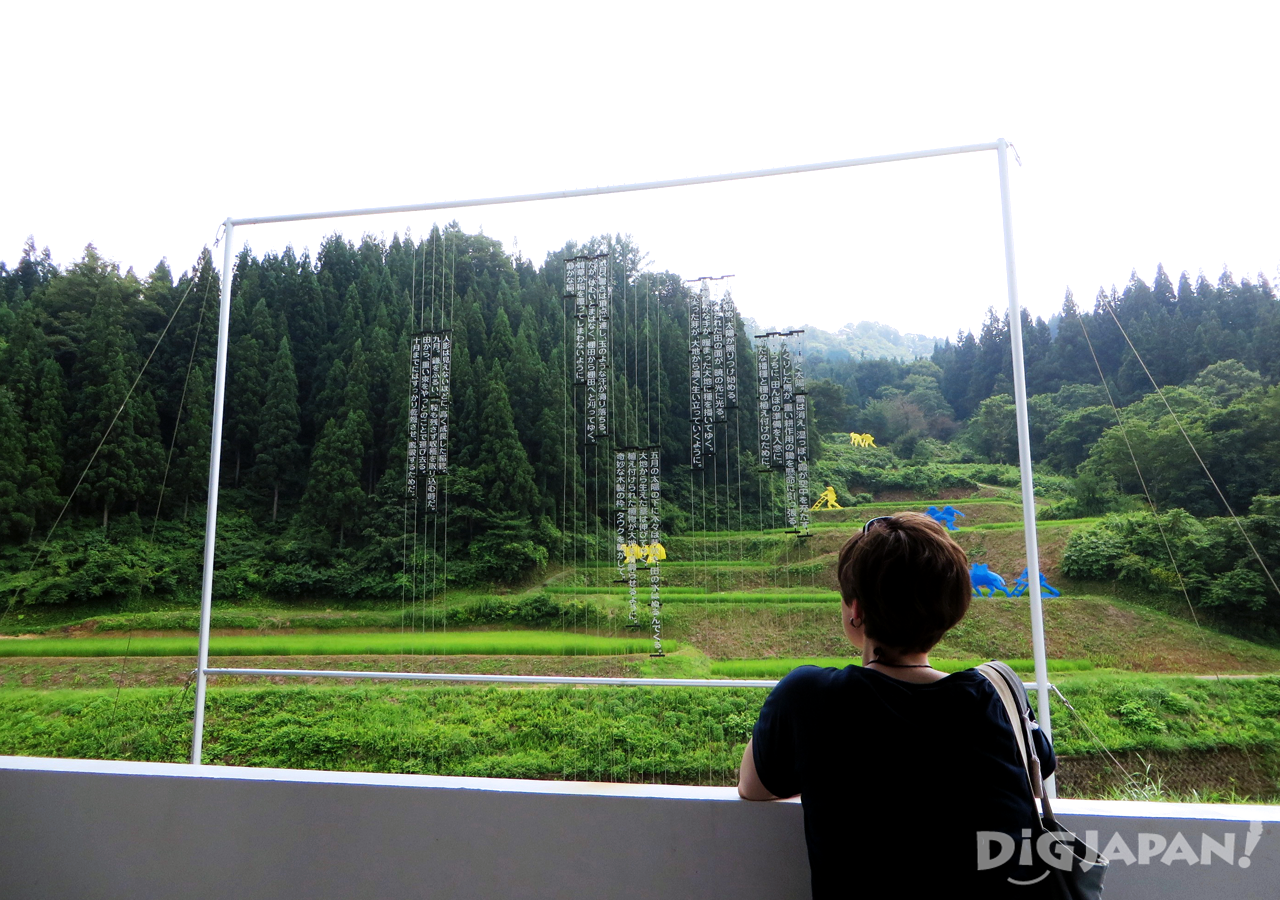 The Rice Field by Ilya & Emilia Kabakov (Russia / USA) features the silhouettes of farmers working in a field. The text suspended close to the viewing area gives the impression of looking at an edited photograph. This is one of the approximately 50 artworks that are scattered around the Satoyama Field Museum, the center of which is the Matsudai Nobutai Snow-land Agrarian Culture Center.

How to Experience the Triennale


What: Echigo-Tsumari Art Triennale 2015
Where: Tokamachi and Tsunanmachi, Niigata (Echigo-Tsumari Area)
When: July 26 thru September 13, 2015
Recommended length of stay: The Echigo-Tsumari area covers approximately 760 square kilometers and contains around 370 artworks. Given the size of the area as well as the large number of artworks, it’s estimated that it would take about a week to see every piece. As such, a stay of 1-2 nights in the area would enable you to see a good amount of art. 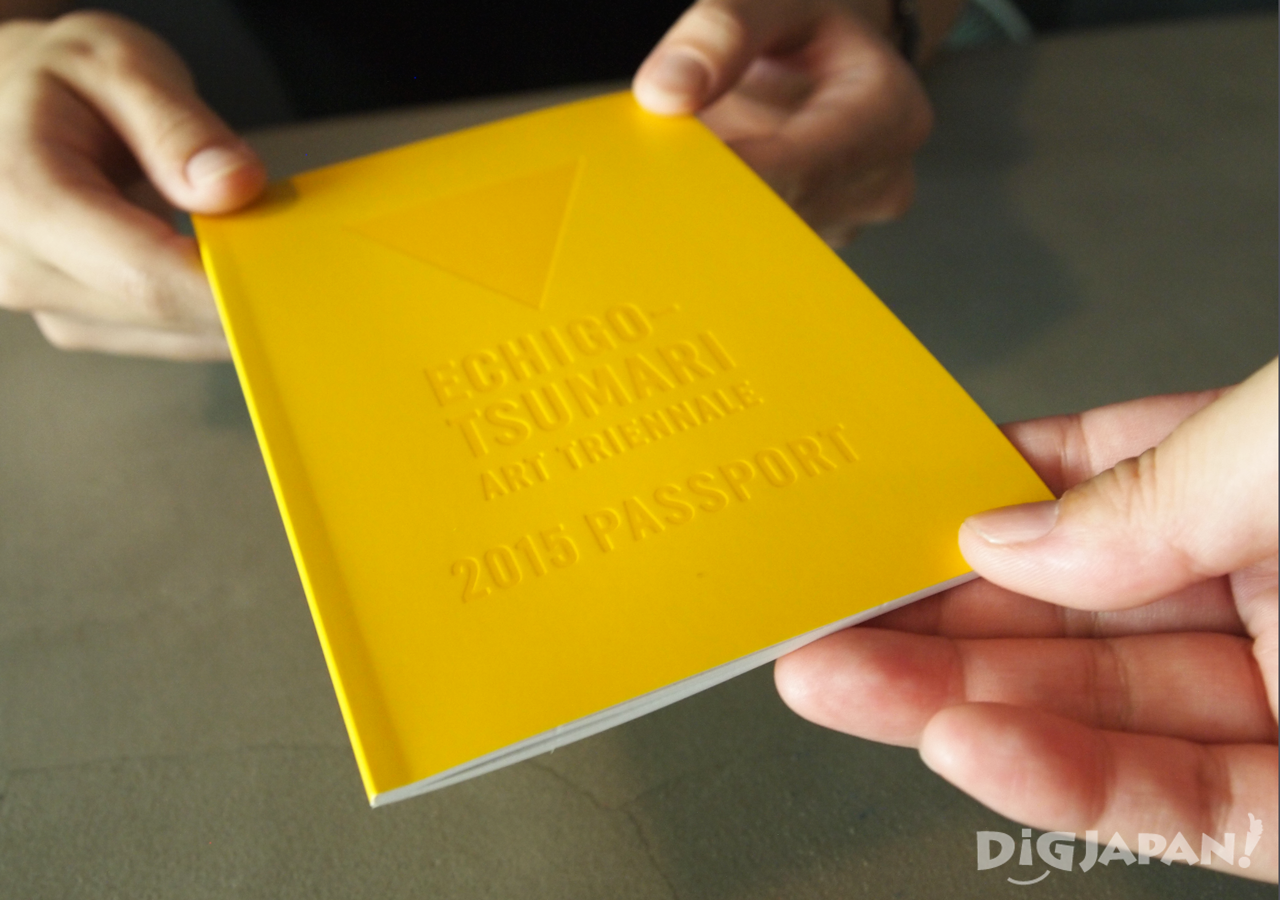 The art sites at the Triennale cost money to view. Unless you’re only planning to visit a few sites, it is worthwhile to purchase an Echigo-Tsumari Art Triennale Passport. You can use this passport to enter sites for free and receive discounts on fees for special exhibitions and performances. These bright yellow passports also include a place to collect special stamps from many of the art sites to keep track of which ones you have visited. Passports can be purchased at Triennale information centers as well as at main art sites.


Getting Around the Triennale

There are rental bicycles in some areas such as in front of Tokamachi Station, but there’s only so much ground you can cover on two wheels. Renting a car is probably the best option if you want to have complete control over what you see and how much time you spend at each site. If you’d rather leave the driving to someone else but still want some control over which artworks you see, there are area-specific bus tours and taxi services available. There are also bus tours that follow predetermined courses covering several areas. For more information about transportation services within the Echigo-Tsumari area, please visit the Echigo-Tsumari Art Field website. 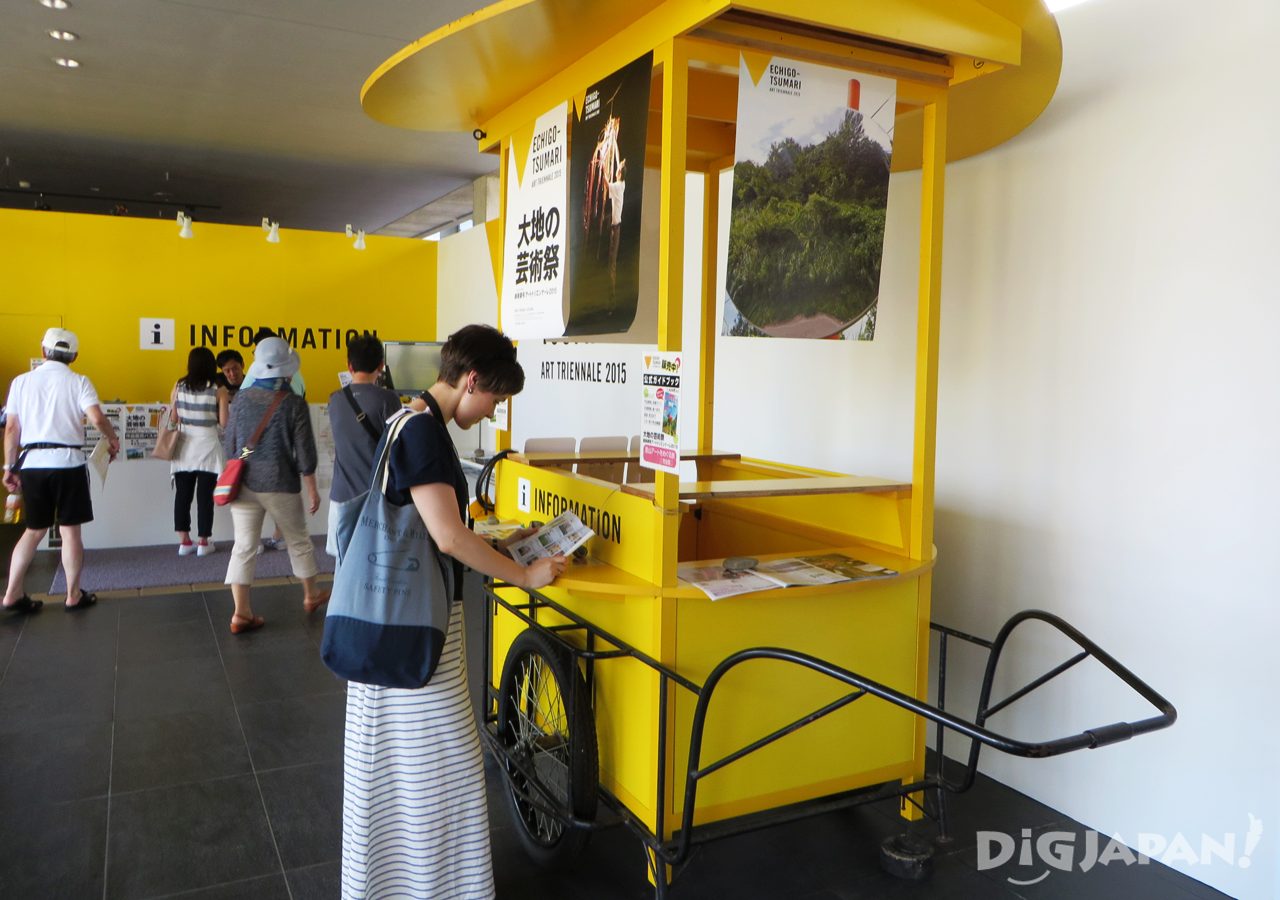 Getting to the Triennale

While the Triennale is the main event of the area, there are other programs that run throughout the year which that are worth a look.

What is the Echigo-Tsumari Triennale? | DiGJAPAN!