Learn a little about the history of and how to enjoy one of Niigata's beloved meals: hegi soba! 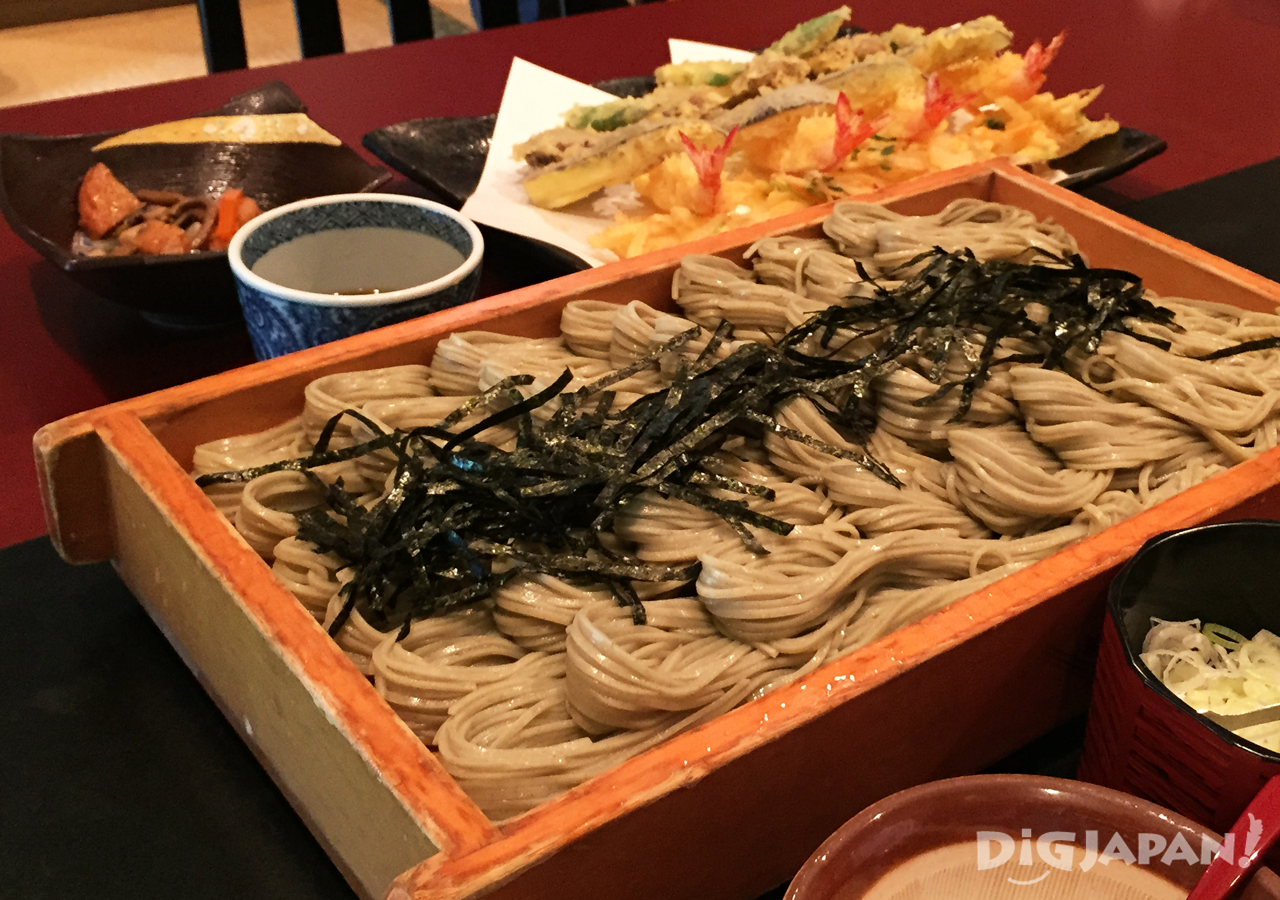 Japan is obsessed with regional specialties, or meibutsu in Japanese. These meibutsu often take the form of food. No matter where you go in Japan, every region is bound to have at least a few. And you can be sure that when Japanese travel, they make a point of eating them. One of the best parts of these meibutsu (besides being delicious) is that they often reveal a lot about the culture of a particular region. An example of this is one of Niigata prefecture’s most famous meals: hegi soba.

First, a little history. Soba has been around since the Edo period. In Niigata, it was mainly produced in an area called Uonuma. Because Uonuma did not grow wheat which was usually mixed with soba flour to make noodles, the people of the region used local vegetables like ground burdock root instead.

In addition to soba, Uonuma was famous for producing beautiful textiles. When weaving the cloth, a type of seaweed called funori was ground and applied to the weft to stiffen the fibers and make the process easier.

Maybe someone forgot to go out and gather burdock on soba making day, or maybe someone was feeling really creative. Whatever the reason, one day someone decided to try adding the funori to the soba flour and hegi soba was born. 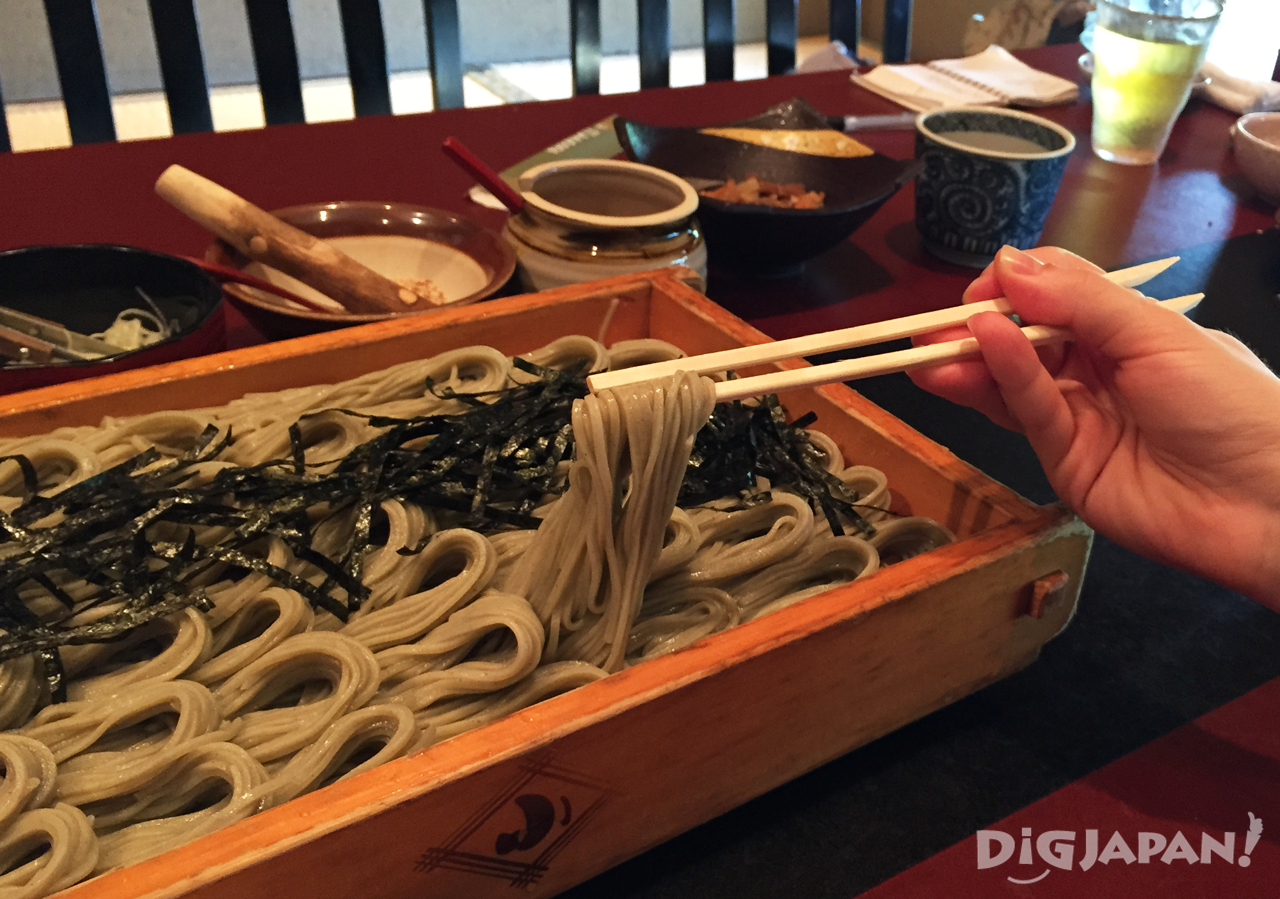 The soba noodles are wound up in mouthful-sized portions and layered in the tray.

You might be wondering where the “hegi” in “hegi soba” comes from. Excellent question. Like zaru soba, hegi soba gets its name from the dish in which it’s served. The verb hagu, to strip or to peal, is pronounced hegu in many of the dialects of the Kanto region. Trays made from planned wood were called “hegi.” Thus the soba, wound by hand into mouthful-sized portions and layered in the tray, is called “hegi soba.” 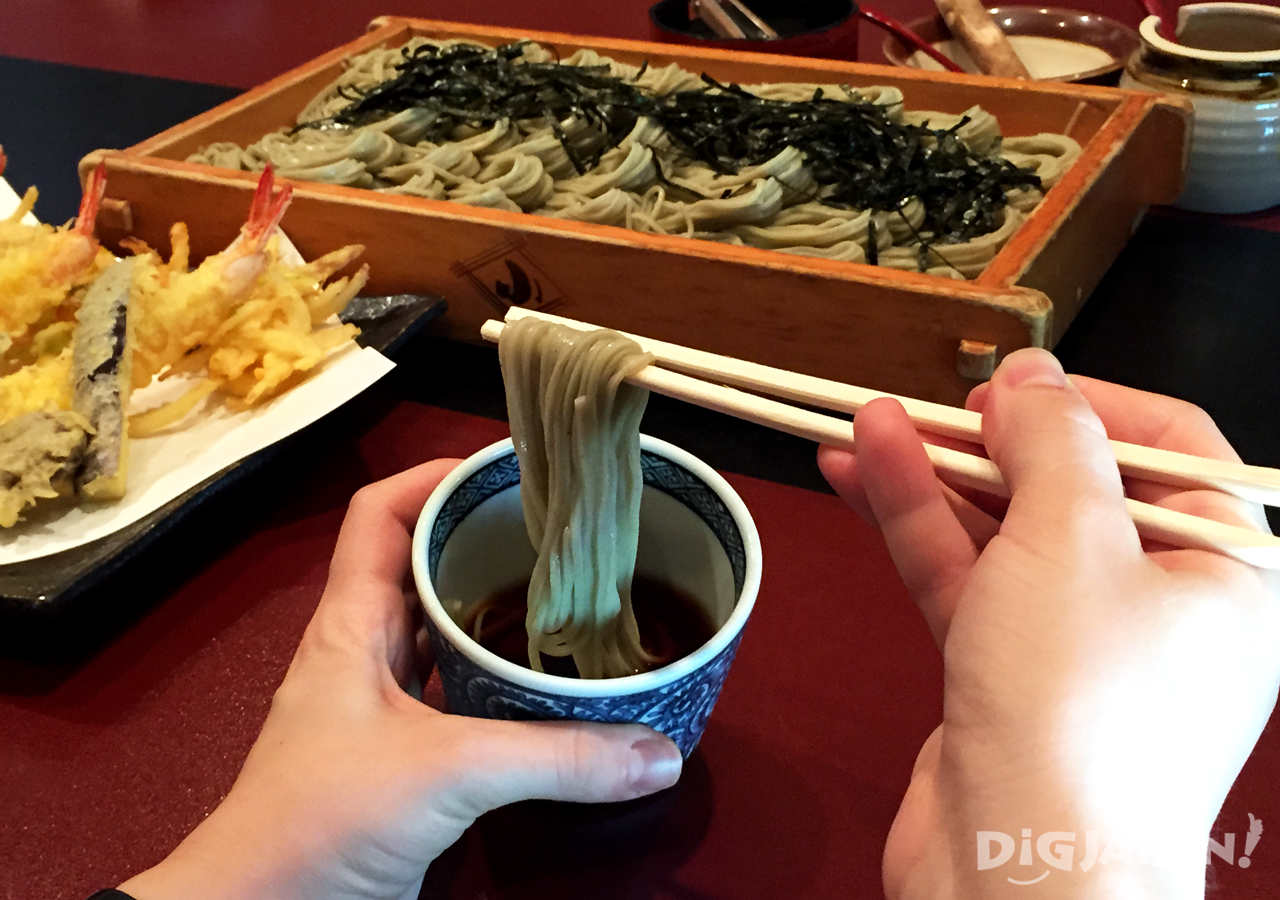 Dipping my hegi soba in the mentsuyu.

Now about the taste. The funori makes the noodles a little more slippery, even bouncy, compared to regular soba noodles. I don’t find that the taste differs that much, though. The kick comes from the mentsuyu, or dipping broth, and the seasonings you add to it. According to Mr. Minagawa of the restaurant Kojimaya-Souhonten in Tokamachi, there is a suggested order for enjoying hegi soba. First, dip your noodles in the mentsuyu just as it is to get your flavor baseline. Next, you should try the soba with some hot Chinese mustard. Spread a little mustard on a part of your soba, then carefully dip your noodles in the mentsuyu. Don’t let the mustard and mentsuyu mix. Then, add some finely sliced green onions to your mentsuyu. Dip your noodles in and notice how the flavor has changed. Last, you can add some ground sesame seeds. 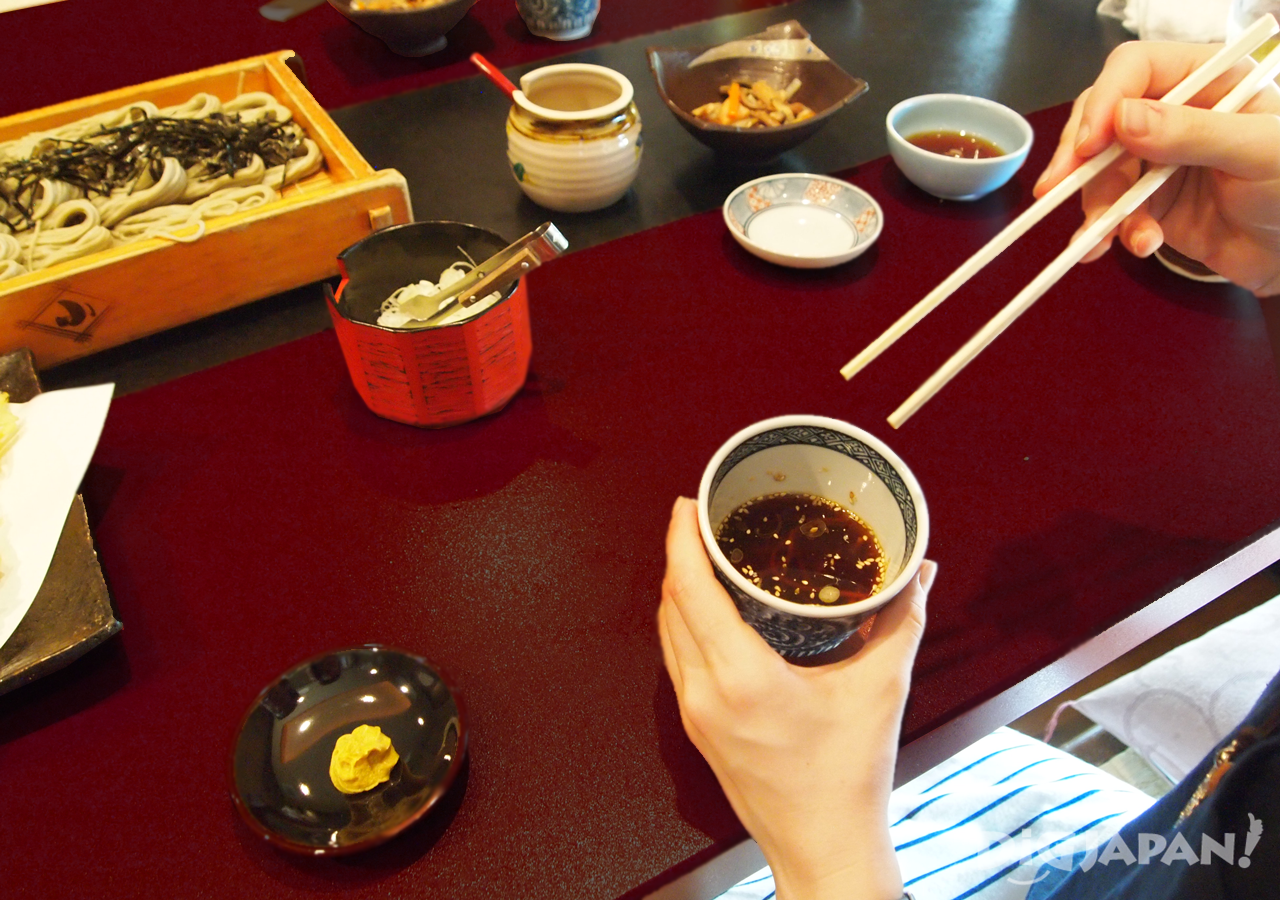 To season your hegi soba, there is mentsuyu, hot Chinese mustard, green onions, and sesame seeds.

If you’ve had zaru soba before, you might be surprised that there’s no wasabi to go with your noodles at Kojimaya-Souhonten. The reason for that is wasabi was not originally grown in the area, so they decided to keep it off the menu.

Hegi soba is a thing of pride in Niigata. The city of Tokamachi has even created a special Soba Ticket to share the hegi soba love with foreign tourists. You can pick up a Soba Ticket from the Tokamachi Tourist Information Center located at the west exit of Tokamachi Station. This will get you two 500-yen vouchers for soba. The vouchers can be used at 14 different restaurants in the city. You get two so you can taste-test the soba of different restaurants. The ticket also comes with additional coupons for use at other facilities in Tokamachi. Don’t forget to pick one up if you’re planning on taking a trip to Tokamachi! 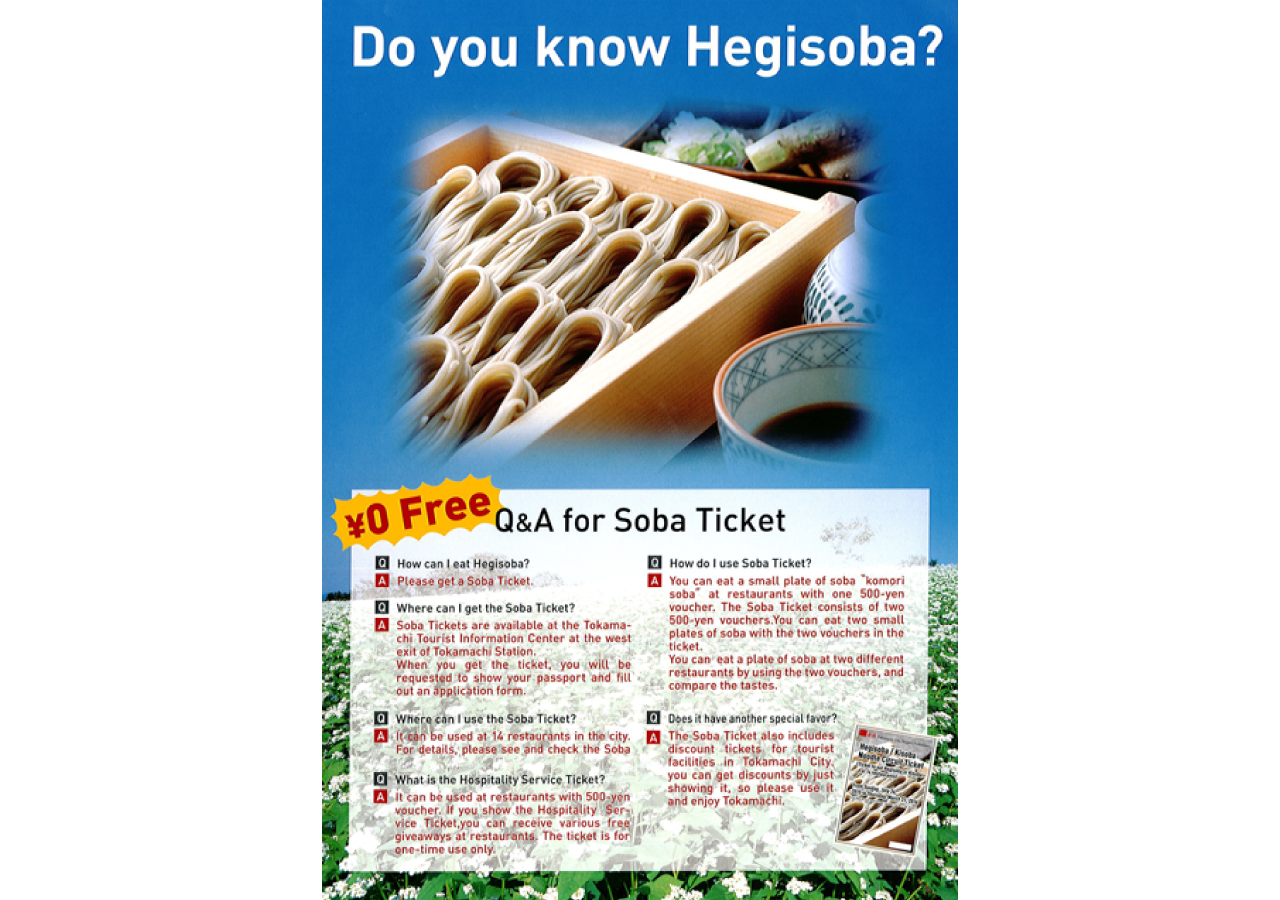 The Hegi Soba Ticket is available at the Tokamachi Tourist Information Center.