Although Kyoto is a fantastic destination any time of year, first time travelers to this treasure of a city should strongly consider visiting in the spring. Imagine the sight of Kyoto’s thousands of temples and shrines surrounded by sakura, or maybe even catching a glimpse of a geisha through the softly falling petals. These are the kinds of sights that make for lasting memories. Get inspired for your springtime visit to Kyoto with DiGJAPAN!’s list of 10 must-see sakura spots. 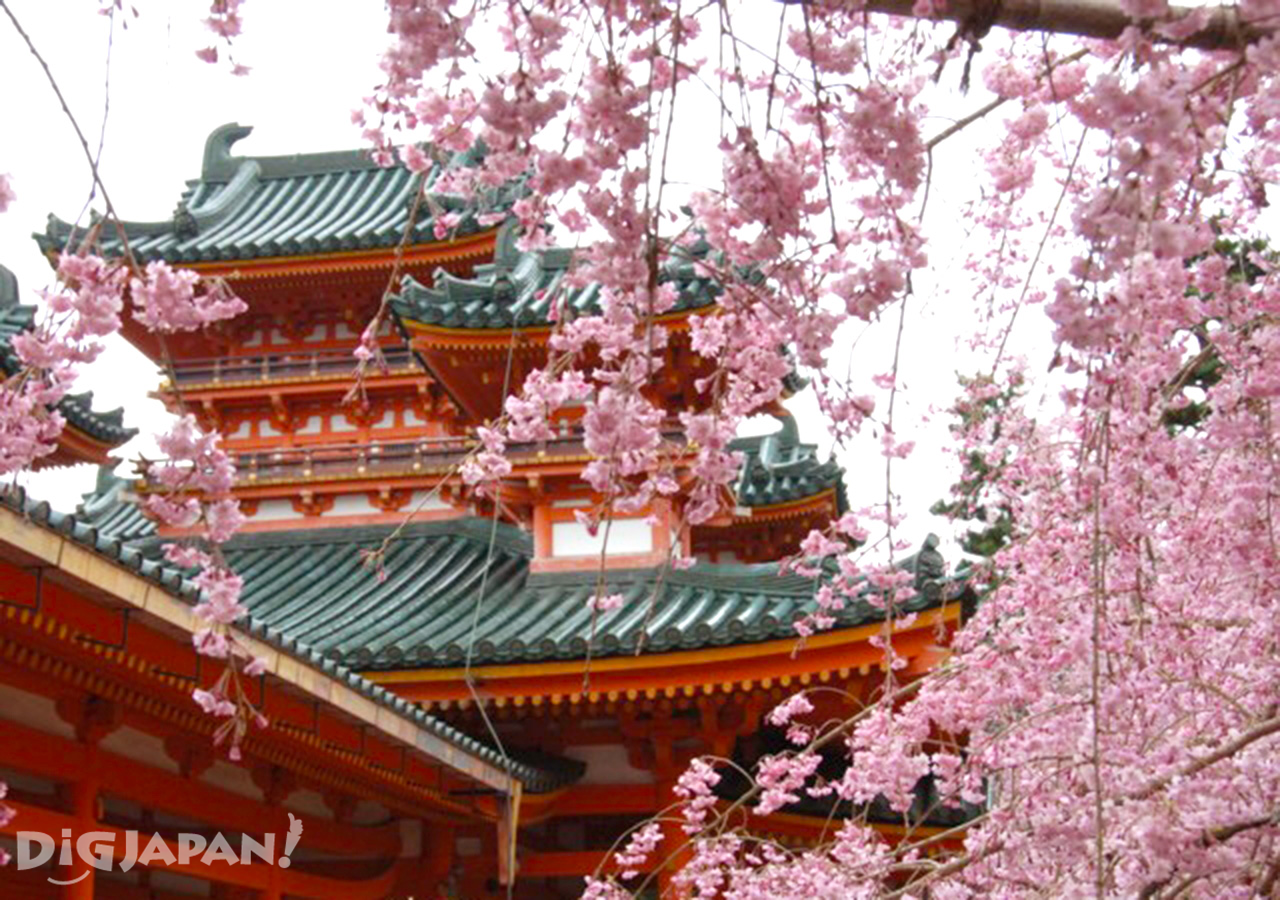 Perhaps best known as the site of the Jidai Matsuri, Heian-jingu Shrine is also a popular spot for sakura. While here, stop by the garden to see yaebenishidare sakura blooming by a peaceful lake. The shrine’s giant torii surrounded by cherry blossoms is also a great photo spot. 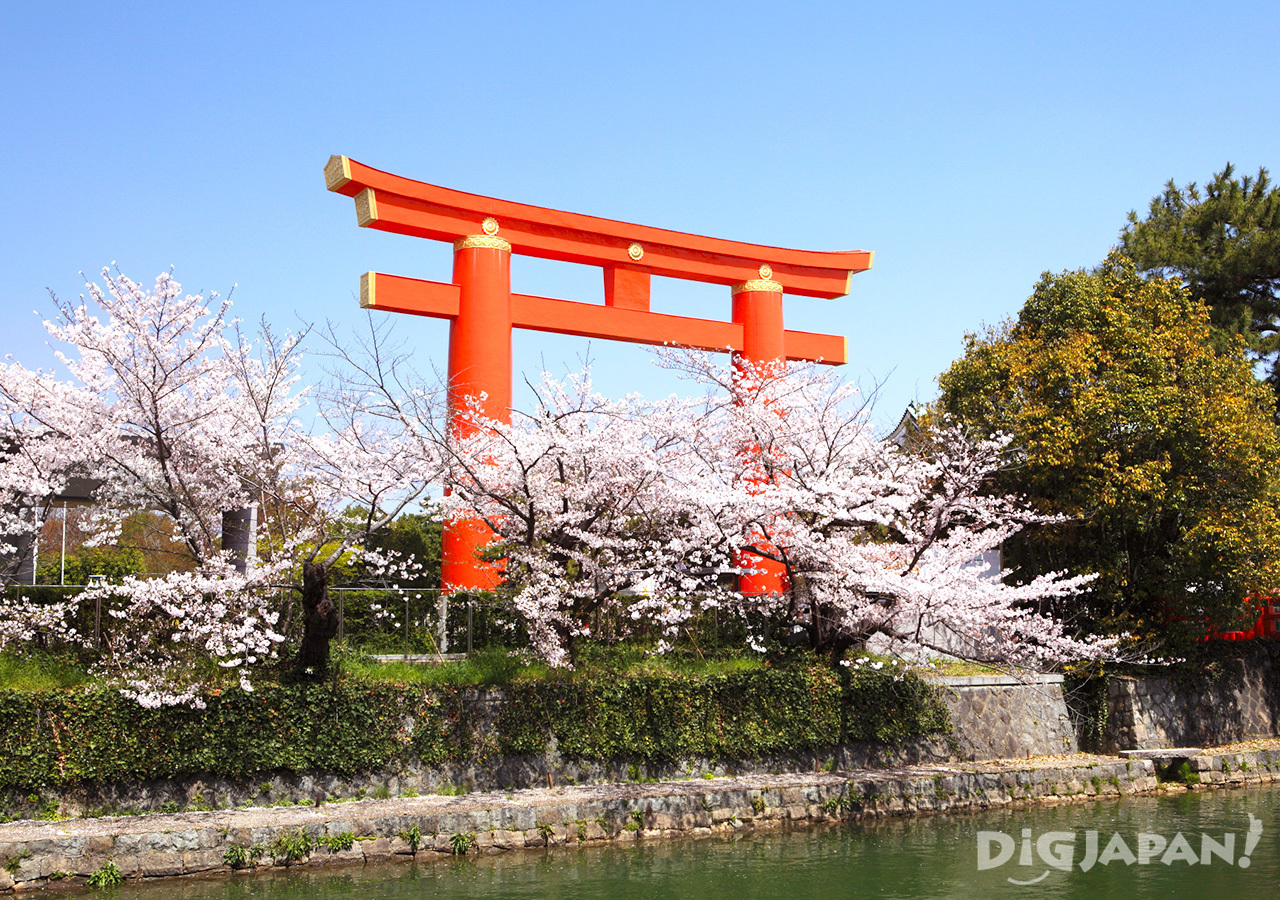 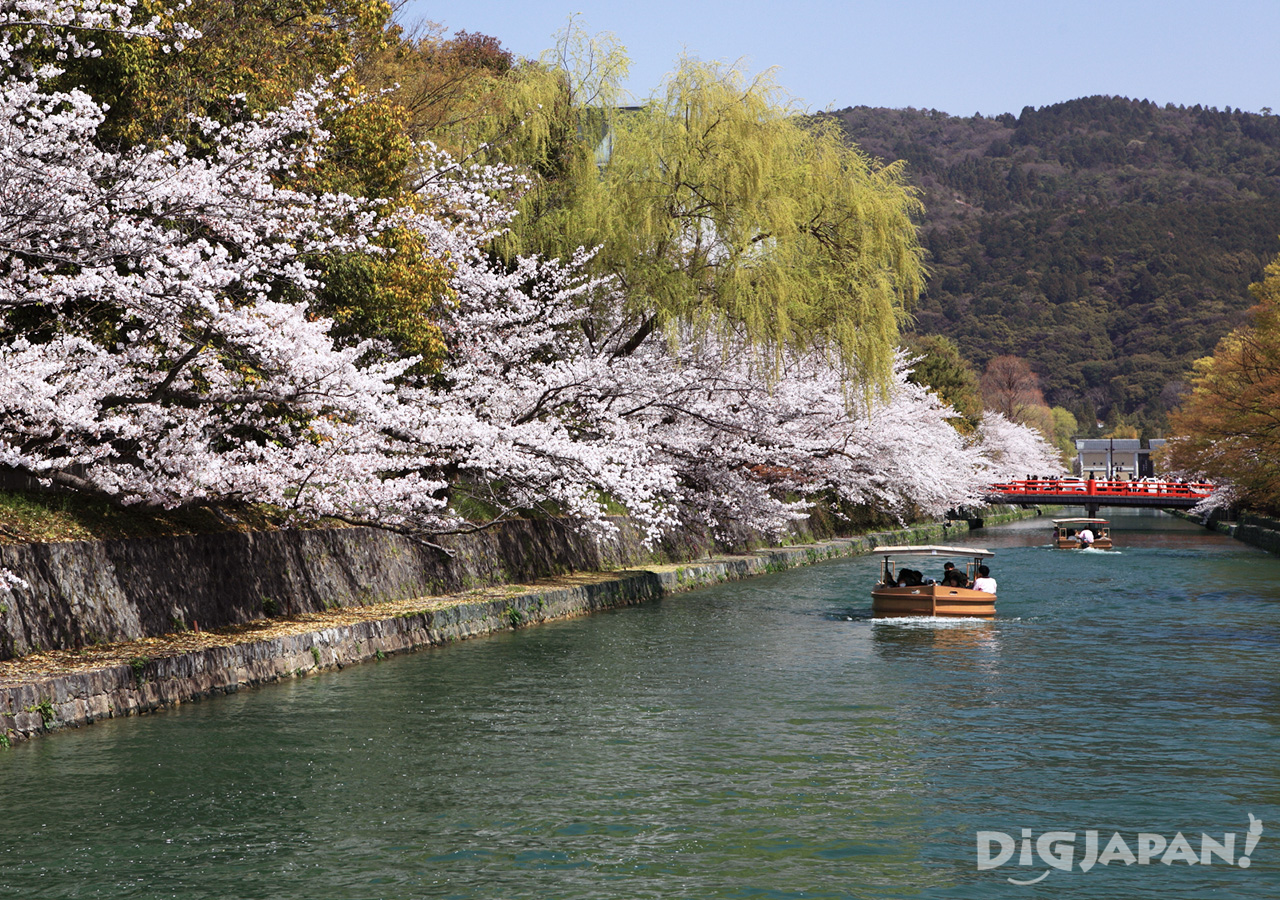 After visiting Heian-jingu Shrine, head over to the nearby Okazaki Canal which connects Lake Biwa with the Kamo River. You can get a great view of the sakura lining the canal on a boat tour. Once you return to shore, stop by the Keage Incline. Once used to move boats from the Okazaki Canal to those at higher elevations, this section of defunct railroad is home to nearly 100 sakura trees. 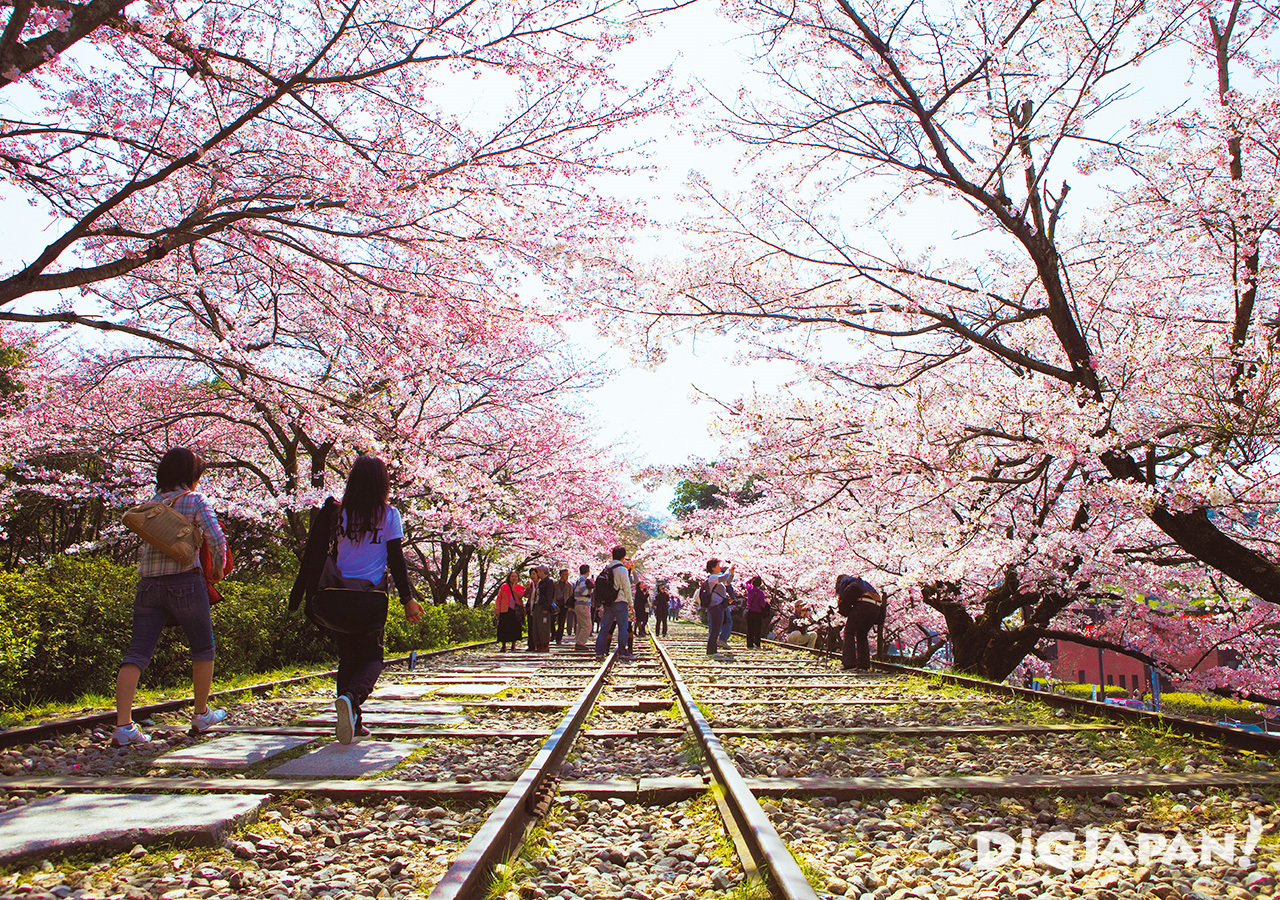 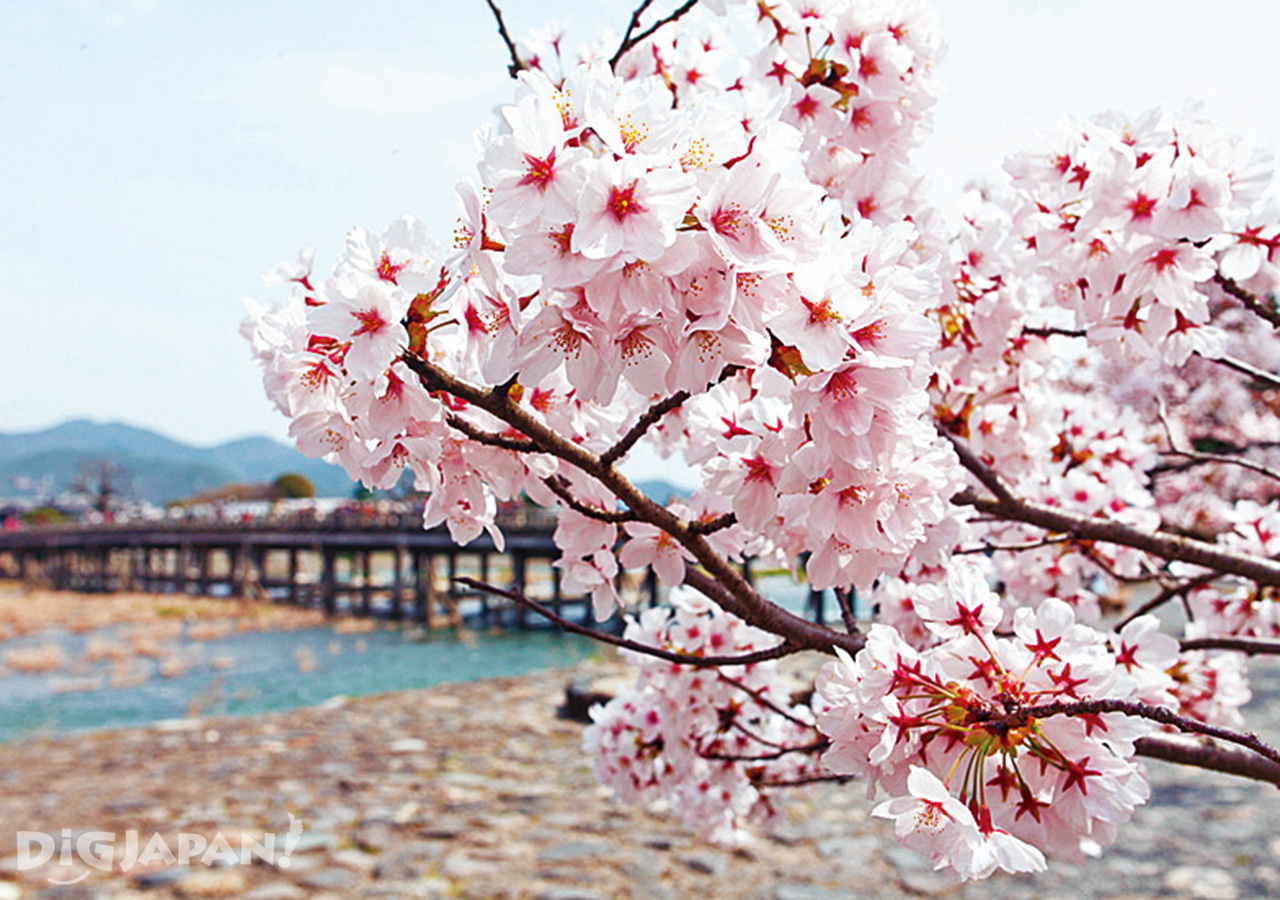 The mountains behind the Togetsukyō Bridge are dyed in shades of pink when the sakura bloom in April. The trees and bridge are illuminated at night and reflect in the river below. 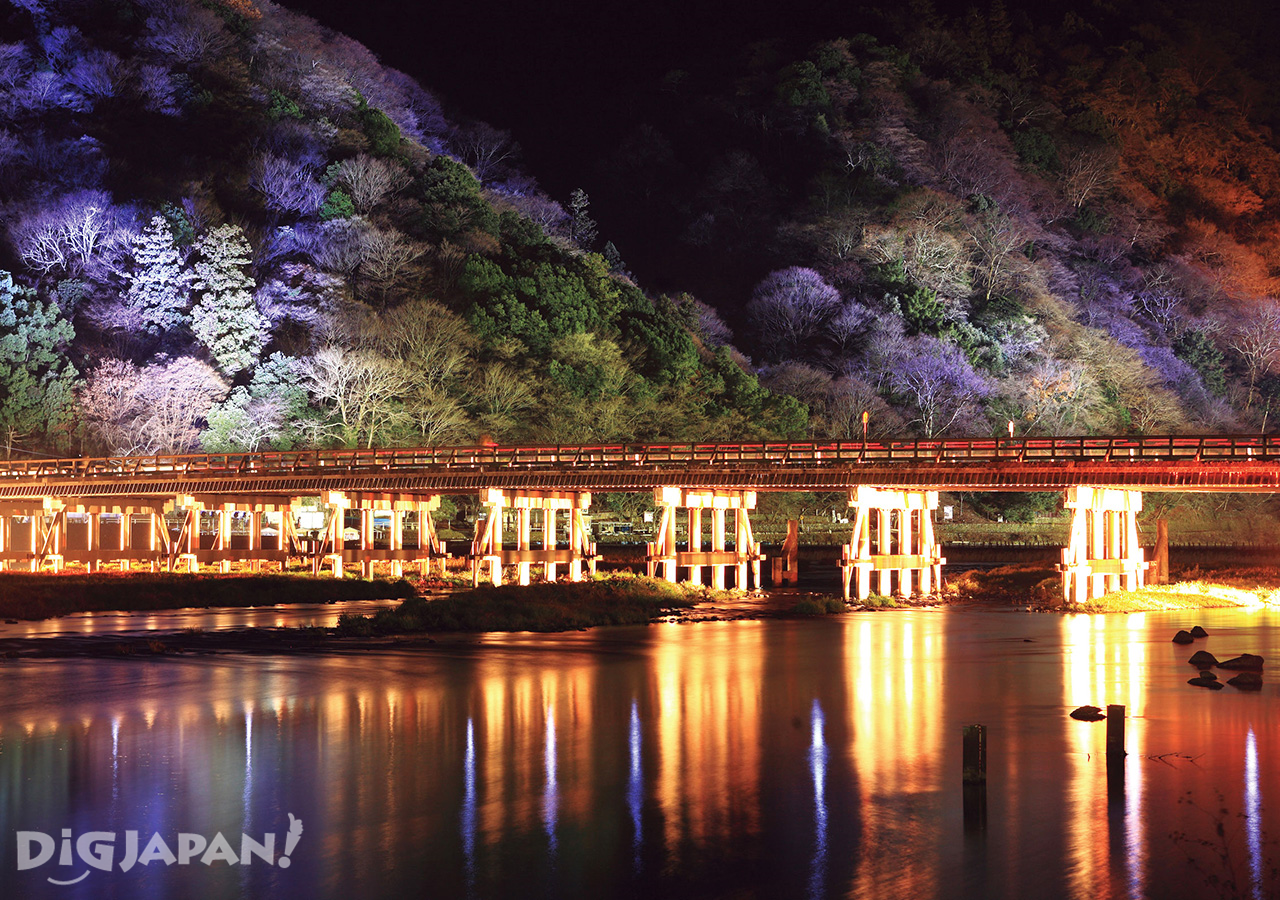 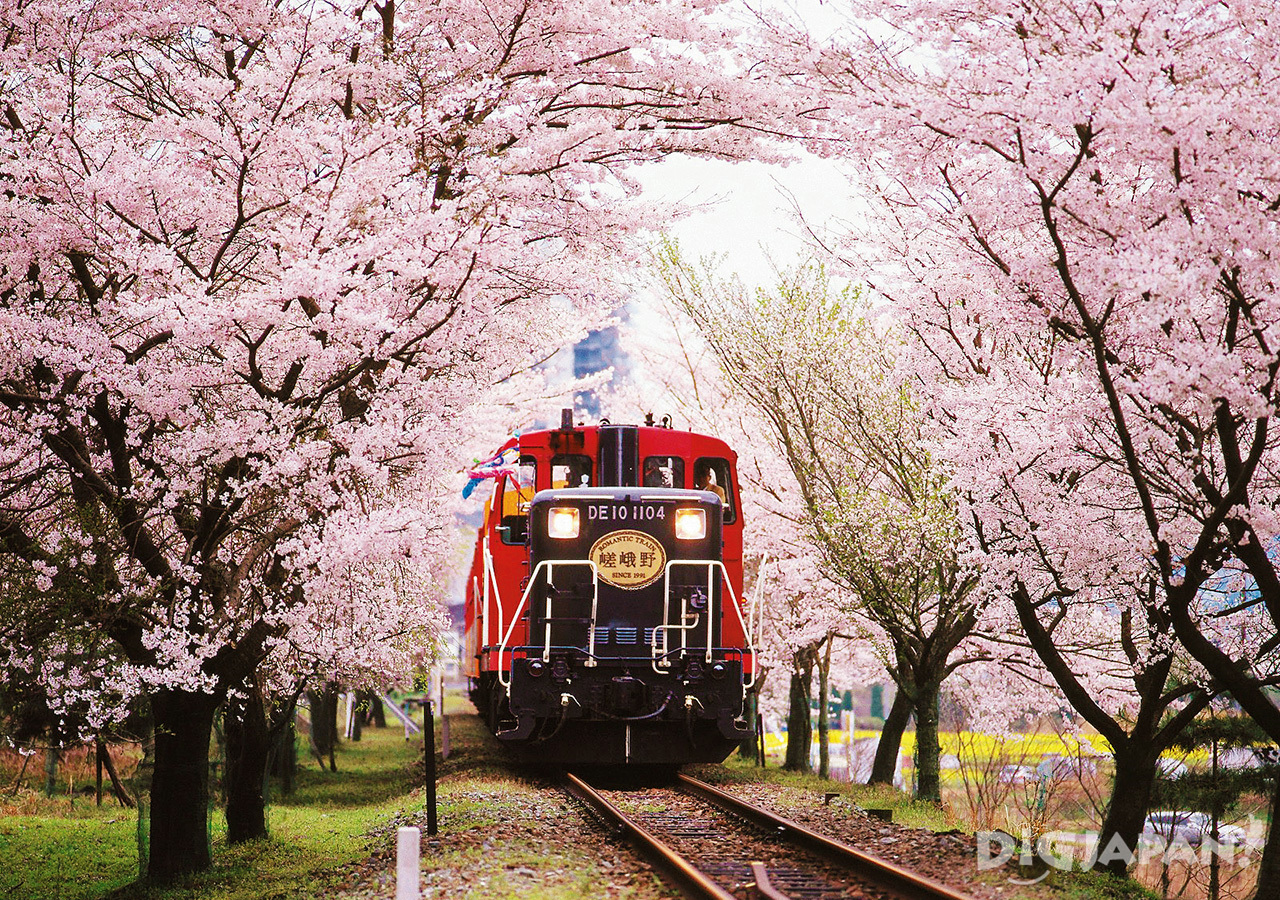 Enjoying a leisurely ride on the retro Sagano Romantic Train is a must in the spring. Some 4.5 miles (7.3 km) of the track which runs along the majestic Hozu River turns into a tunnel of sakura at the peak of the blooming season. 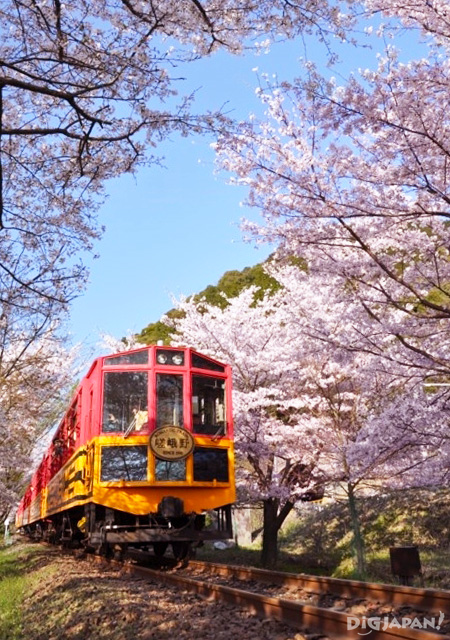 
Tetsugaku No Michi (The Philosopher's Path) 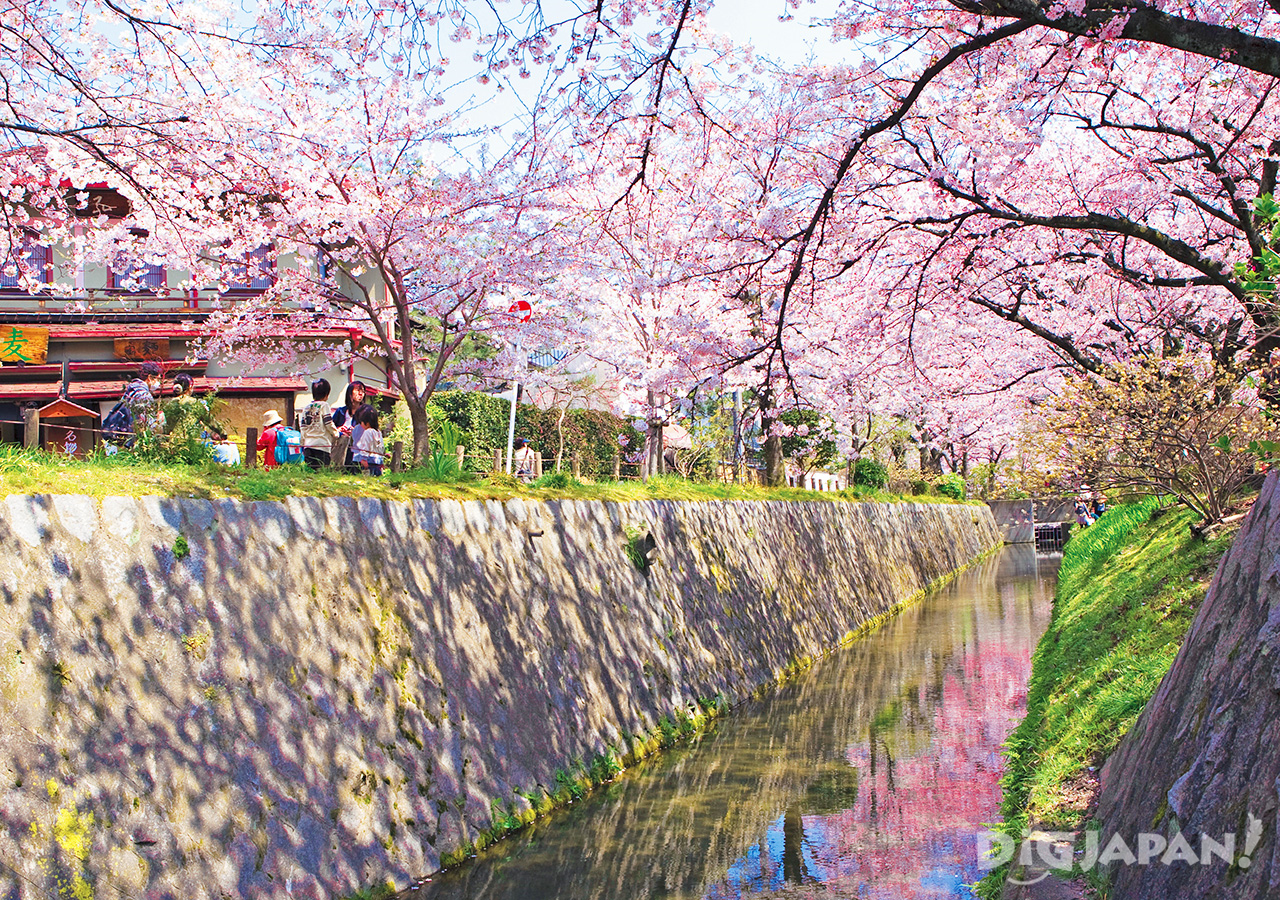 Get philosophical on a stroll down Tetsugaku No Michi or the Philosopher's Path. Running between the area around Nanzen-ji Temple and Ginkaku-ji Temple, this path gets its unique name from the prominent Japanese philosopher Nishida Kitaro. He is reported to have said that the path was a good place for meditation. The sakura blooming along the canal which cover the path like a canopy and the fallen petals underfoot make this one of Kyoto’s most popular spots for sakura. 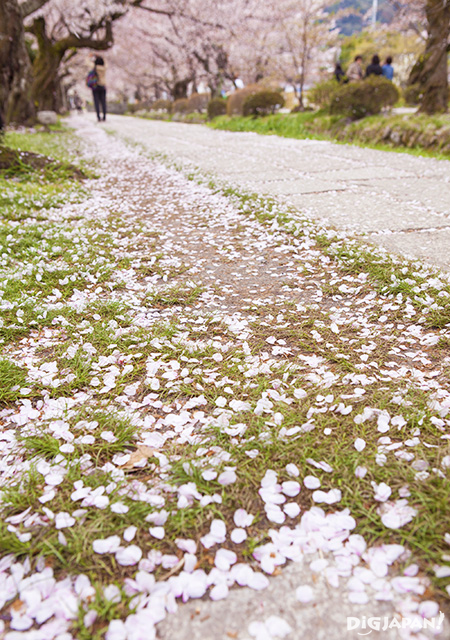 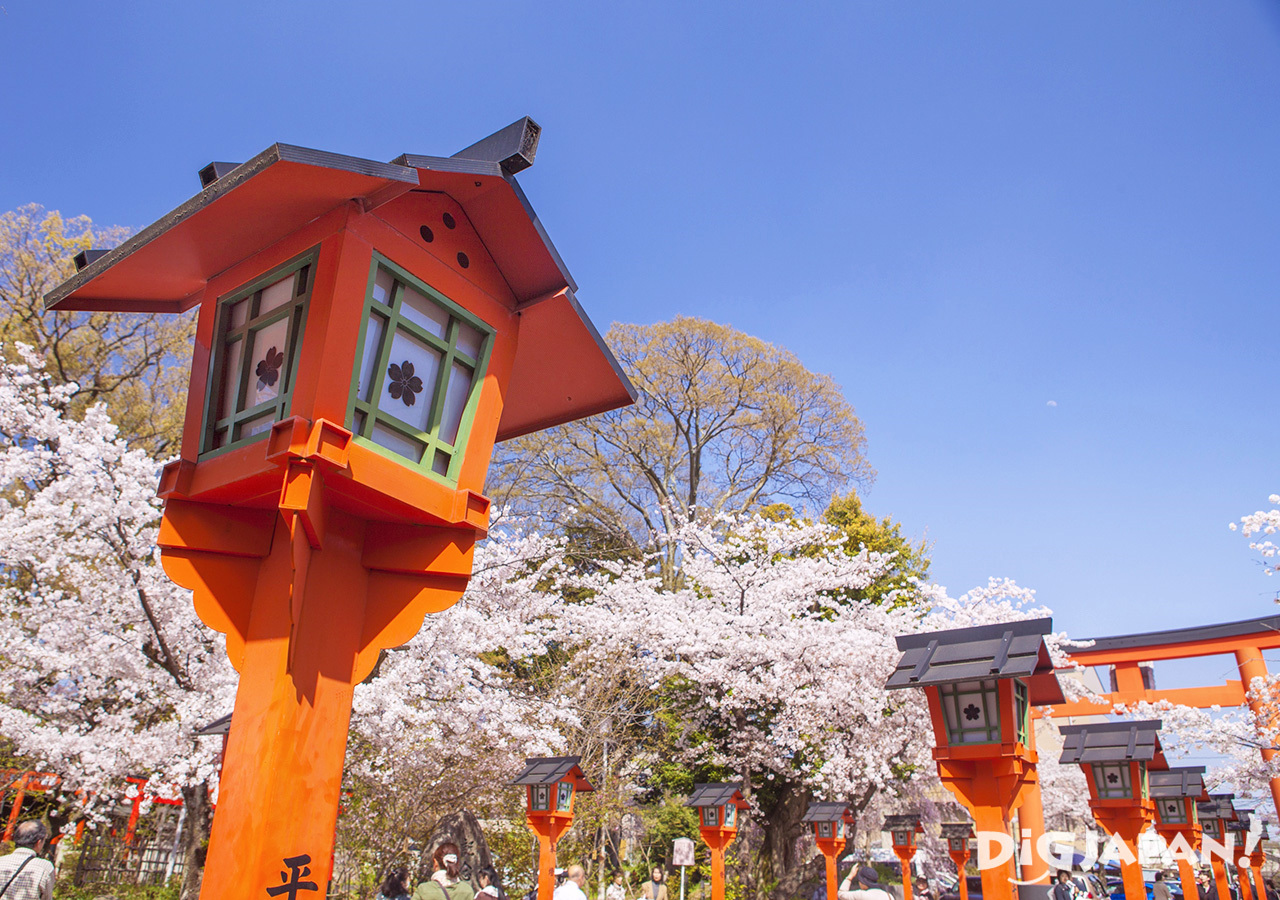 Hirano-jinja Shrine is home to several species of sakura that bloom in various shades of pink at different times during the spring, creating a gorgeous gradation. Don’t miss the nightly light displays! 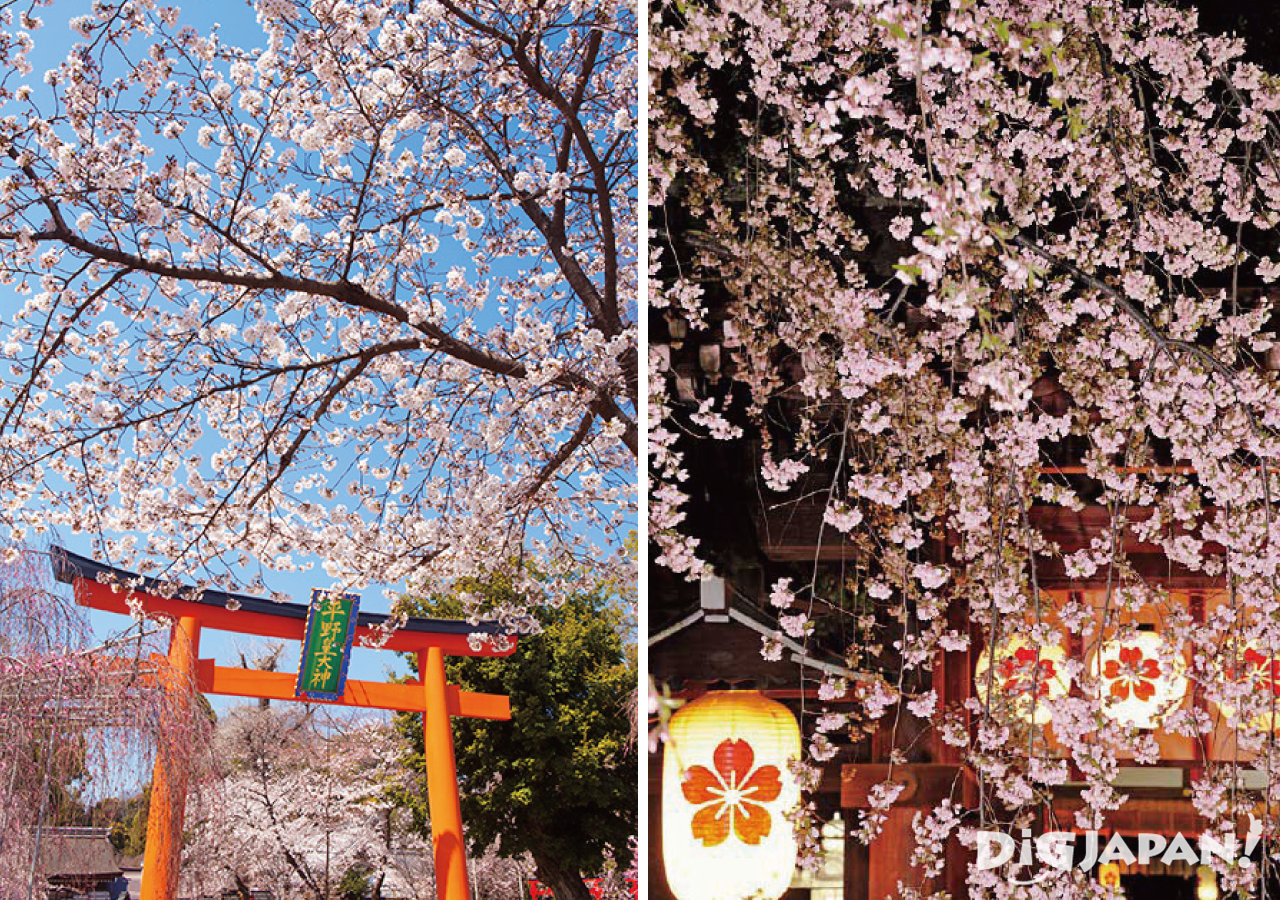 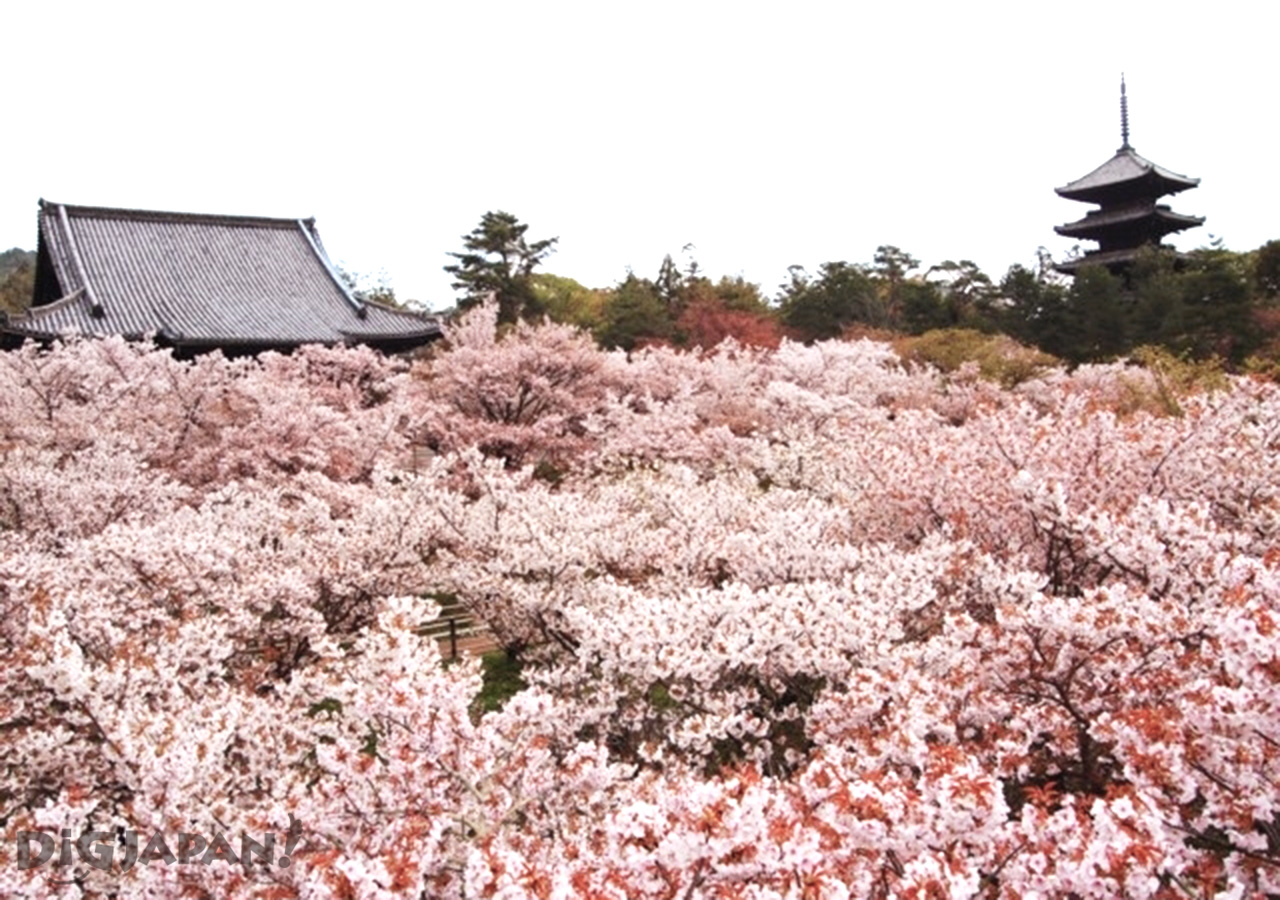 If you’re planning to visit Kyoto a little later in the spring, Ninna-ji Temple is a good place to see sakura at their peak. The omurozakura here are among the latest blooming varieties. The sight of the main temple and the five-story pagoda peeking over a sea of pink sakura makes this spot particularly popular among photographers. 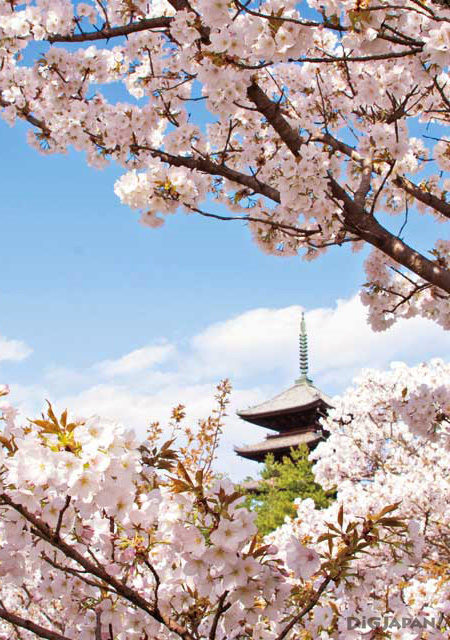 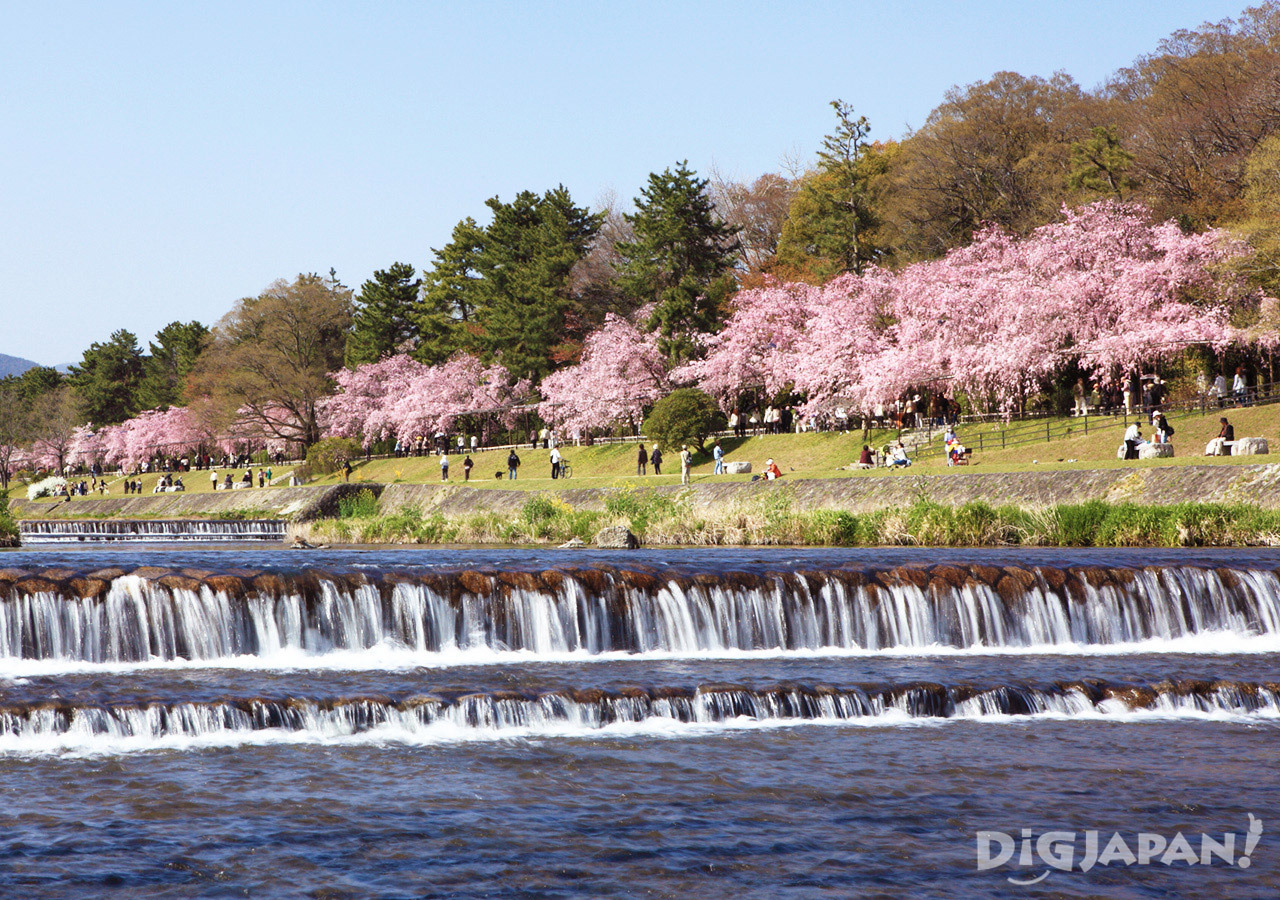 Upstream from where the Kamo River joins with the Takano River around Demachiyanagi, the path on side of the river between the Kitayama Ōhashi and Kitaōjibashi Bridges is known as Nakaragi No Michi. An extremely popular spot for hanami among local residents, it’s not uncommon to see people picnicking under the trees at almost any time of day. Take your lunch to go and join in the fun! 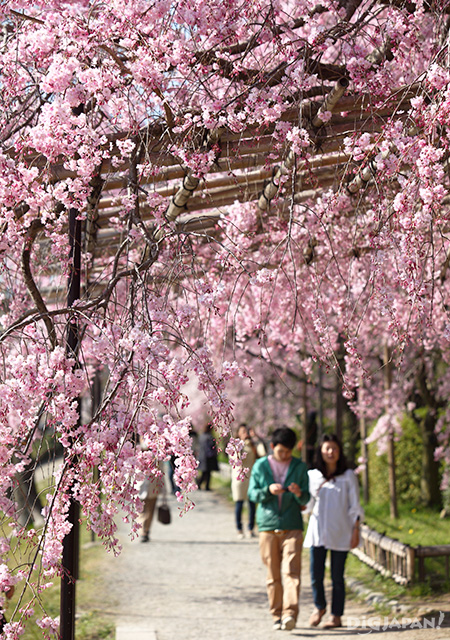 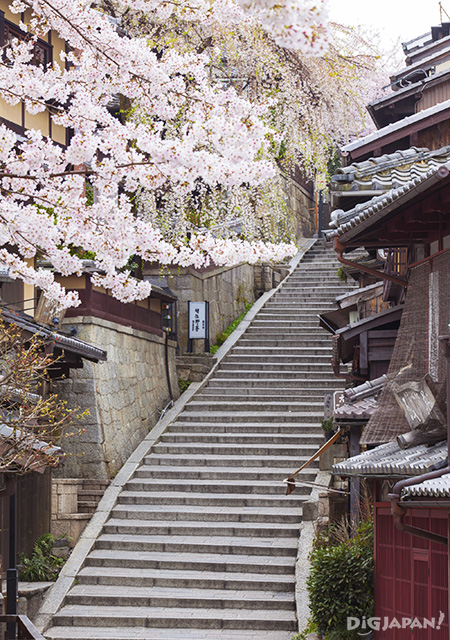 Enjoy some of Kyoto’s most picturesque scenery at Sannenzaka, a neighborhood located just slightly to the north of Kiyomizu-dera Temple. The somber gray of the stone paths and stairs contrast nicely with the gentle pink of the cherry blossoms. 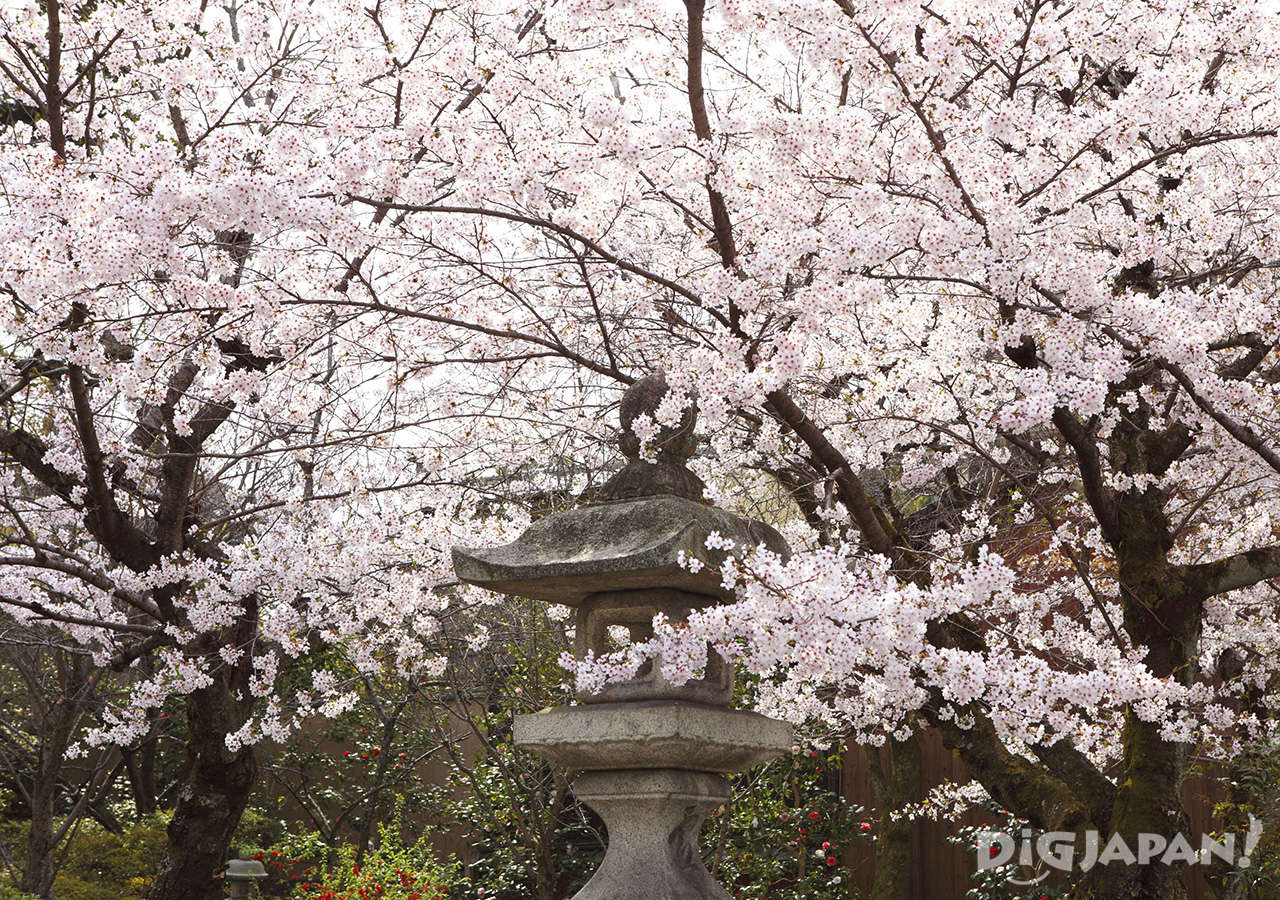 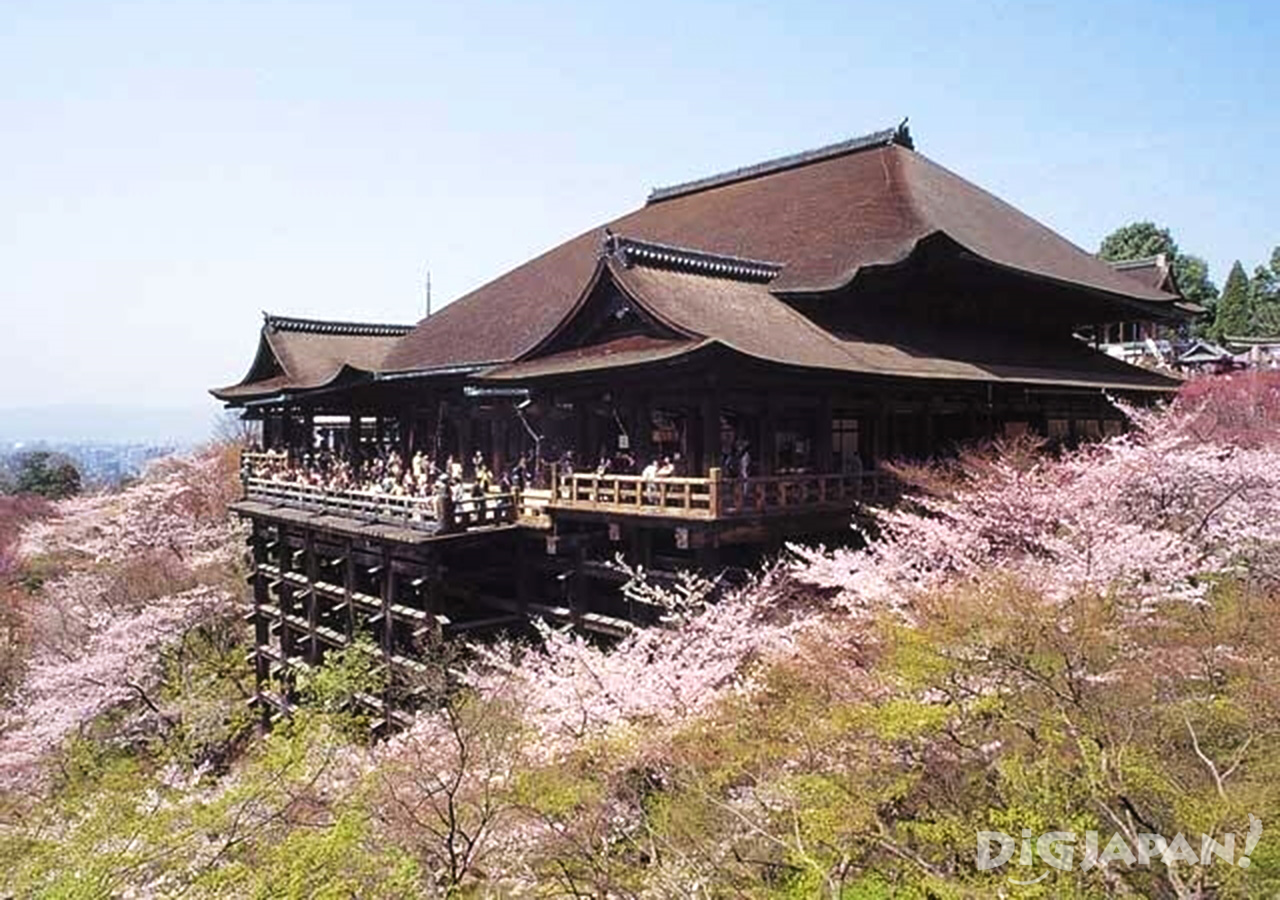 Last but not least is Kiyomizu-dera Temple. While the balcony provides a great view of the sakura growing on the hillside, don’t forget to check out the sakura blooming by the pond located near the exit of the temple. The sakura located around the base of the three-story pagoda is also a must-see spot. Visit in the evening to enjoy illuminated sakura. 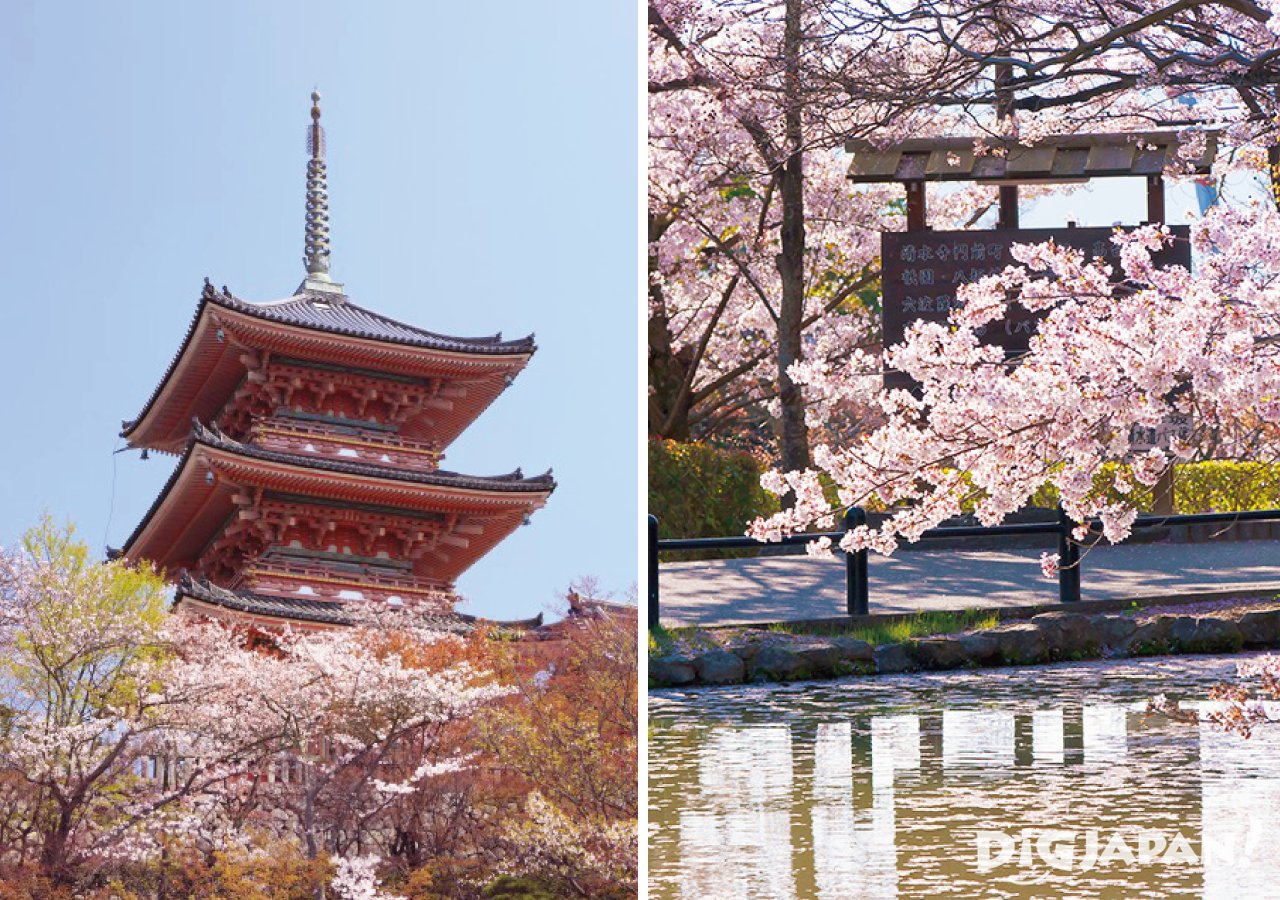 These are just some of the many places to enjoy sakura in Kyoto. Do you have a place you'd like to recommend? Let us know in the comments!

※ Please note that the blooming periods listed in this article are based on predictions. Weather can greatly influence when sakura will be in full bloom.


Map of the Places From This Article 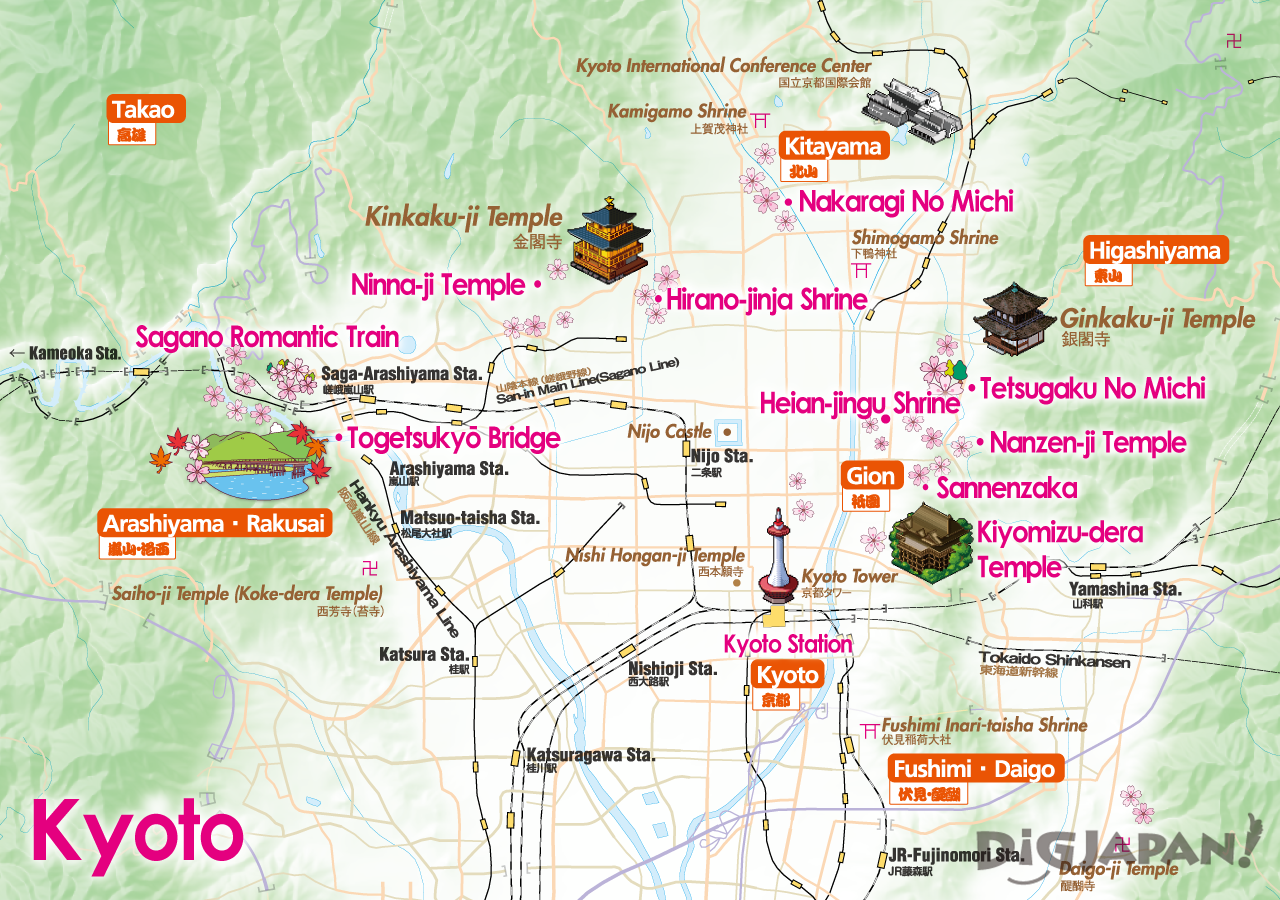