What Kind of Place is Tokyo's Shitamachi?

When speaking about Tokyo, shitamachi refers to the area located south-east of what is now the Imperial Palace. The word shitamachi is often translated into English as downtown, but shitamachi is actually a little different. Downtown refers to a city’s central area or center of business and commerce; however, shitamachi actually refers to the physical level of the land as shita can mean both down and low.

These areas thrived in the Edo period. And while Tokyo has obviously changed a great deal since the Edo period, you can experience traces of Tokyo’s past in its shitamachi. Broadly speaking, this area is divided in different neighborhoods, each with its own unique characteristics. Visiting them all is highly recommended. To get you started, here’s a primer on the neighborhoods that make up Tokyo’s shitamachi. 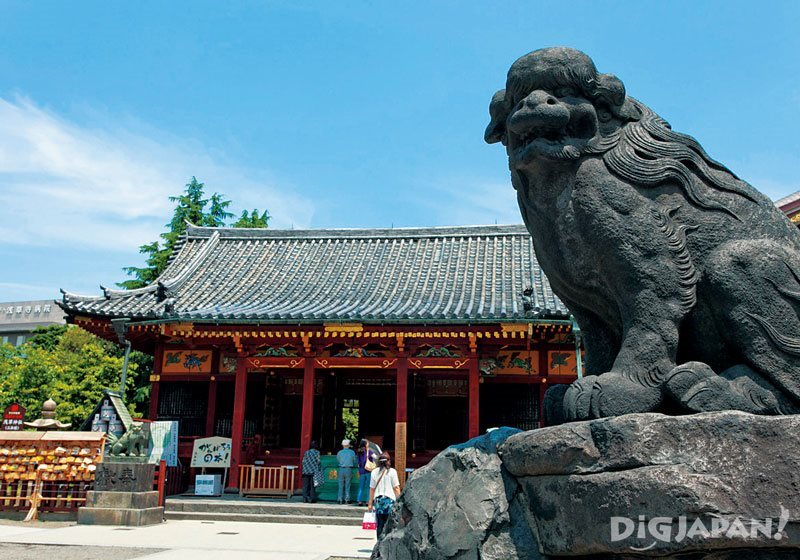 Asakusa was an entertainment district during the Edo period. The area has many famous landmarks including Senso-ji Temple, the shop-lined street known as Nakamise that runs from the Kaminari-mon Gate to the temple, Asakusa-jinja Shrine, and much more. There are many great places to eat in the area including long-standing restaurants and more recently established trendy cafes. 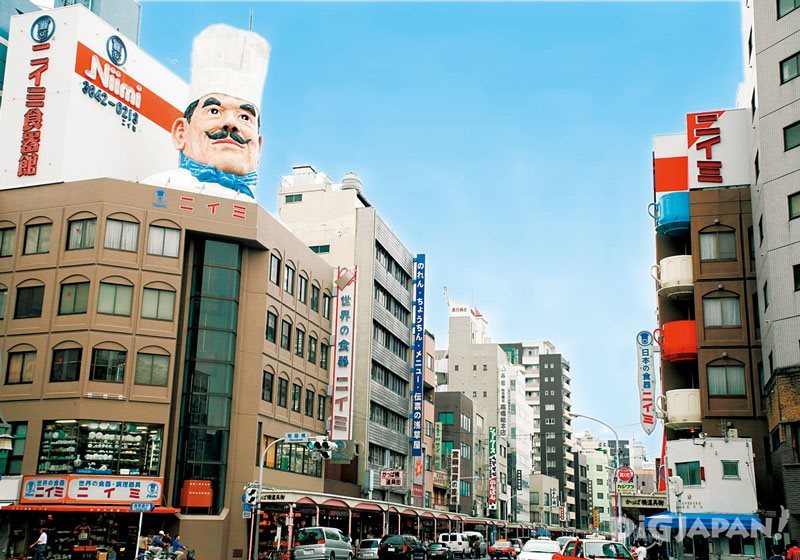 Start at Asakusa Station, accessible by both the subway Asakusa and Ginza lines as well as the Tobu Skytree line. From there, enter Nakamise via the Kaminari-mon Gate and head to Senso-ji Temple. Feel free to pick up some delicious snacks like ningyo-yaki (small sponge cakes in various shapes filled with anko red bean paste) as you walk towards the temple. There are also plenty of places to pick up souvenirs. Next, walk west on Kokusai-dori Street. In about five minutes, you’ll reach Kappabashi Kitchen Street. This area is famous for its many stores selling kitchen equipment as well as the plastic food models used in restaurant displays. Finish up with a stroll along the Sumida River. 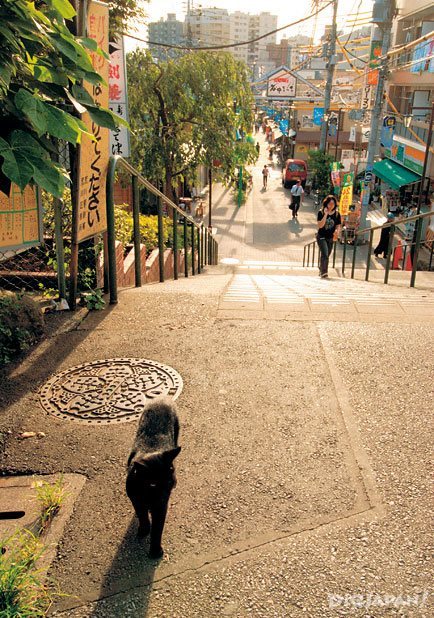 While Yanaka, Nezu, and Sendagi are separate areas, they are best known together by the portmanteau Yanesen. MM東京下町15 P4. Many Buddhist temples gathered in this area during the Edo period, and even now this area retains the feeling of being a “temple town.” On the other hand, this area is often said to be very retro in feeling. There are also many unique art galleries and atelier in the area that continue to ensure the popularity of this area. 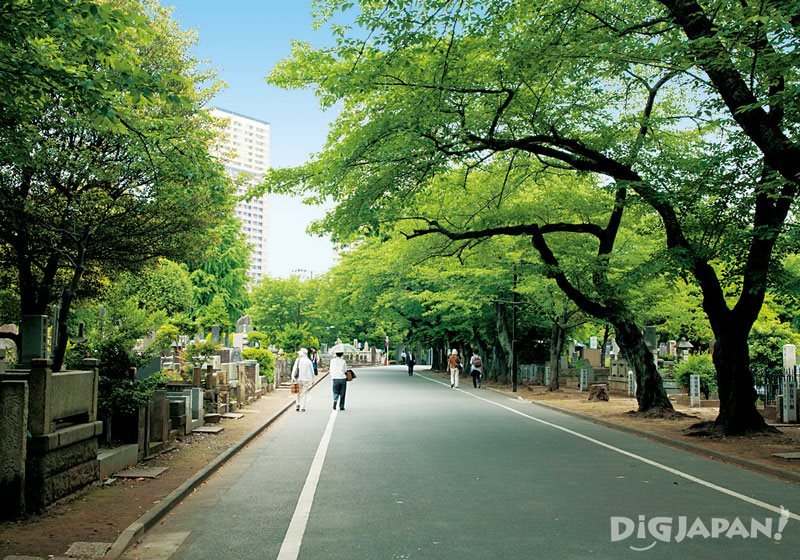 If you’d like to explore the area by foot, it’s best to explore the area around your starting station. If you’re planning to get off at JR Nippori Station, then spend some time exploring the shops of the outdoor shopping arcade known as Yanaka Ginza, which is famous for its many cats! There is also Yanaka Cemetery, which is home to lovely sakura trees.  If you get off at subway Sendagi Station, you can start off with the area known as Dangozaka (lit. dumpling hill). Getting off at Nezu Station provides great access to Yanaka’s many temples. There are many famous shops hiding on the back streets of this area, so feel free to go exploring. Also, there are rental bike services in the area that will help you see more in one day. 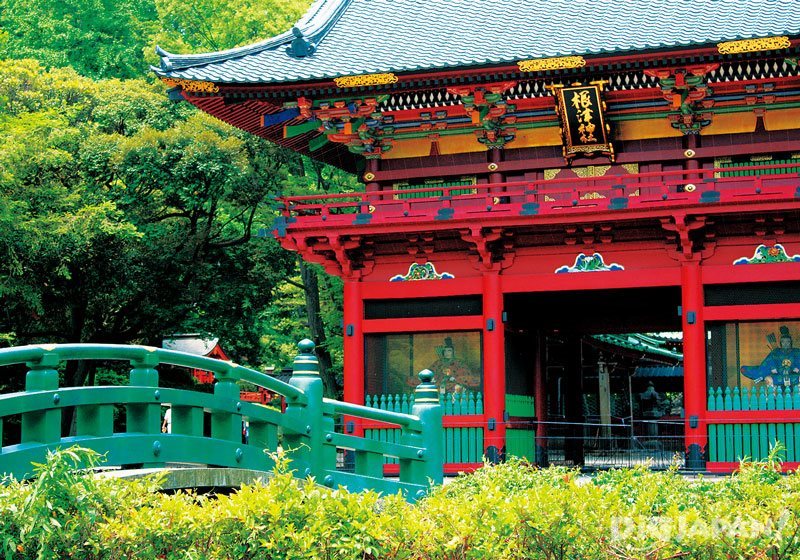 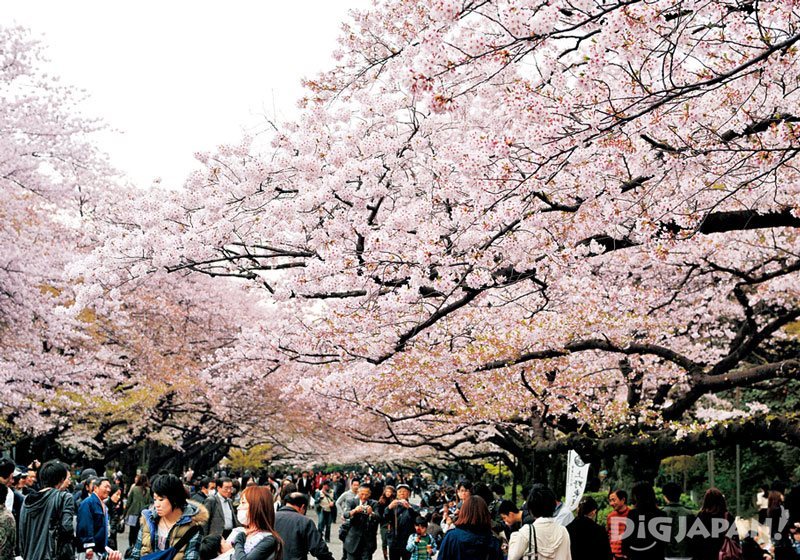 Tucked away inside the beloved green of Ueno Park are a variety of museums that are perfect for some family fun (as well as great choices on rainy days!) as well as Ueno Zoo. There is also the lively shopping area known as Ameyoko (lit. American alley) which is perfect for shopping. You can also visit Ueno Zoo which is famous for its panda bears. Meanwhile in Yushima and Hongo, there are many places connected to scholarship and literature. 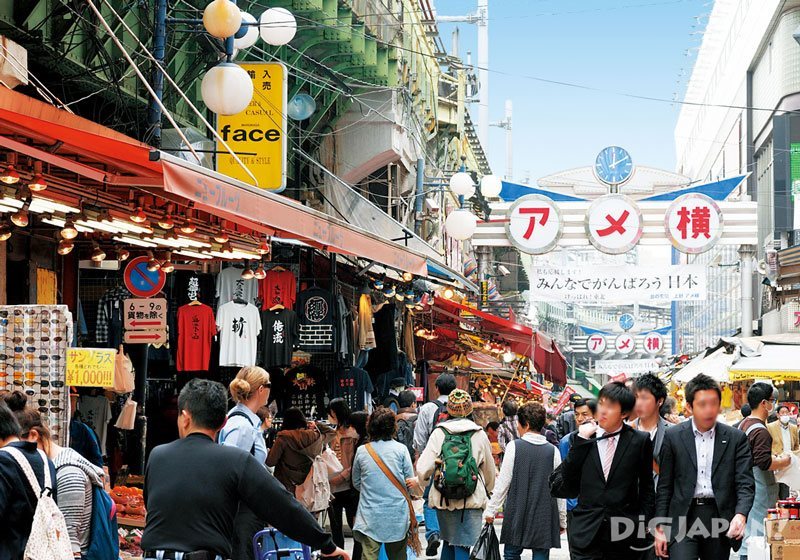 After enjoying some time in Ueno Park, head towards Okachimachi via Chuo-dori Street. Then pass through Yushima towards Hongo on Kasuga-dori Street. Compared to the bustle and noise of Ueno, Yushima and Hongo are rather tranquil places. It’s also easy to get to Yanesen from here. 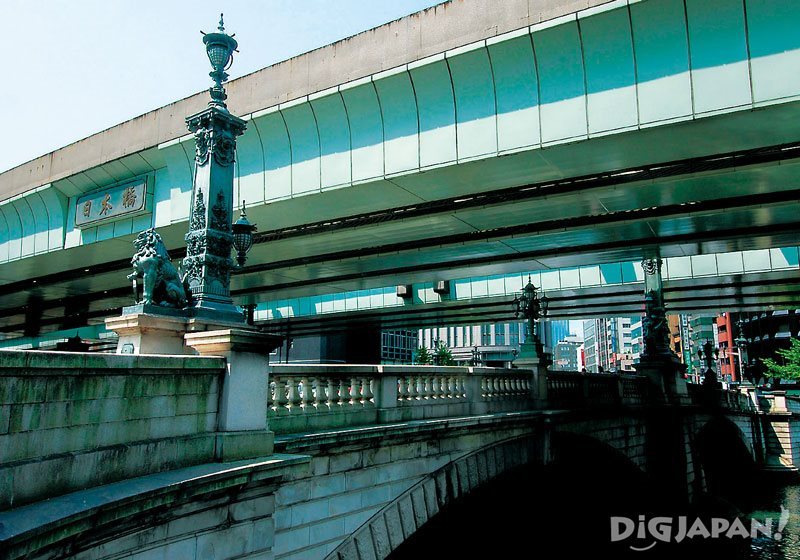 Nihonbashi is a unique place in Tokyo. During the Edo period, is served as the starting point for the Gokaido-- the five routes which connected Edo to the outer provinces. Even today, Nihonbashi is the starting point for calculating miles to and from Tokyo. While the area around Nihonbashi has become home to many highrise buildings in the recent years, you can still find many long-standing shops here and there. Ningyocho literally means doll town. This area was so named because of the many puppetry theatres that were established in the Edo period. 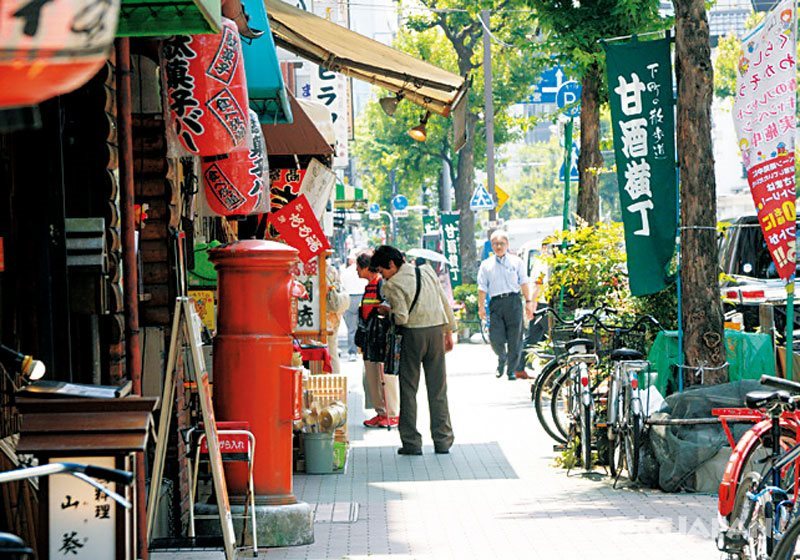 There are many famous sightseeing spots scattering on the north and south sides of Nihonbashi around Chuo-dori Street. Meanwhile, the best area for exploring Ningyocho is the section of Ningyocho-dori Street which runs between subway Ningyocho and Suitengumae Stations. It takes only about ten minutes to walk from Nihonbashi to Ningyocho. 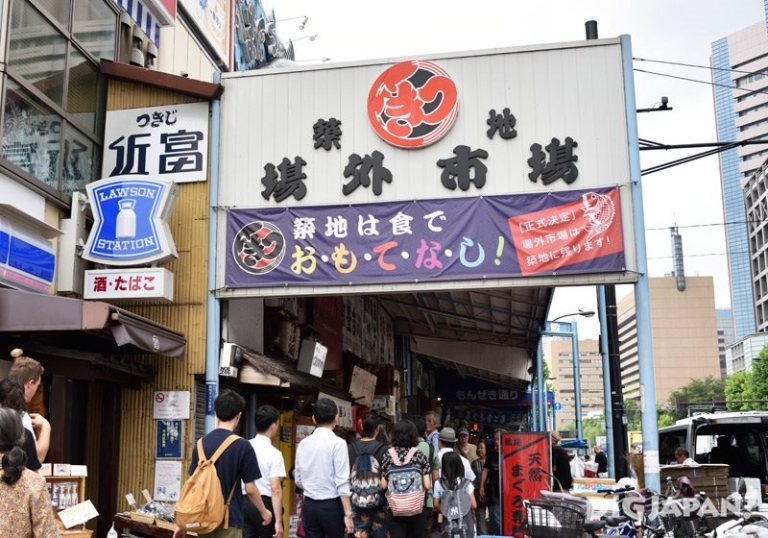 This area is a foodie’s paradise. Called the kitchen of Tokyo, Tsukiji is famous for it’s amazing fish market, delicious sushi shops, as well as Tsukiji Hongan-ji Temple. Then there’s Tsukishima, which is famous for its street lined with restaurants selling monjayaki, a dish similar to okonomiyaki, but with a runnier texture. Be sure to bring your appetite when you visit here! 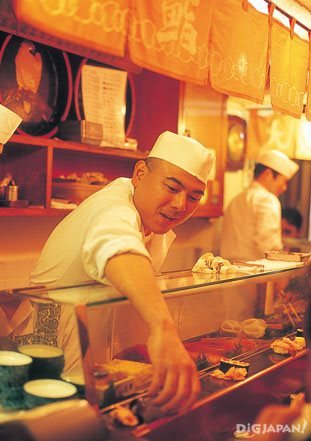 Inside a sushi shop in Tsukij iMarket

Check out some great places to eat at Tsukiji Market here! 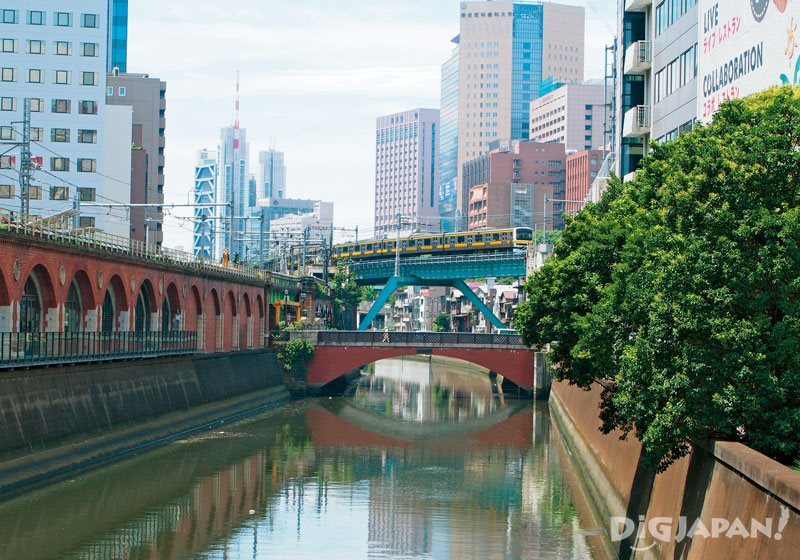 Among the many buildings in the area, there are still traces of the Edo period remaining here and there. Known during the Edo period for many places of scholarship, it’s is home today to colleges and vocational schools. There are also many stores specializing in used books, musical instruments, and sporting goods. 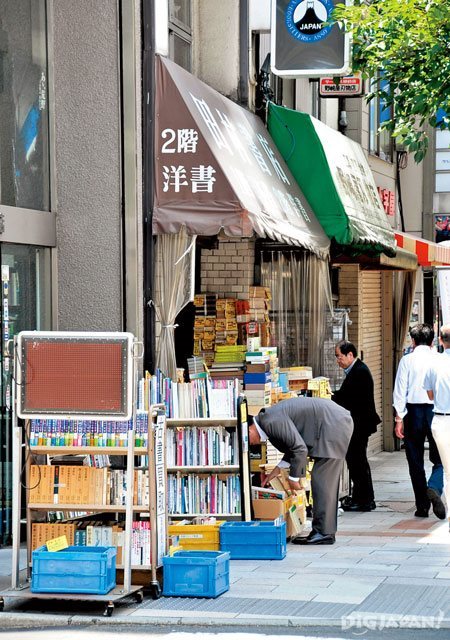 The best places to experience the feeling of the old capital in this area is around Yushima Seido Temple and Kanda-jinja Shrine, both of which are accessible from JR Ochanomizu Station. If you exit subway Jinbocho Station and walk along Yasukini-odori Street, you’ll see one of the biggest collections of used bookstores in the world. 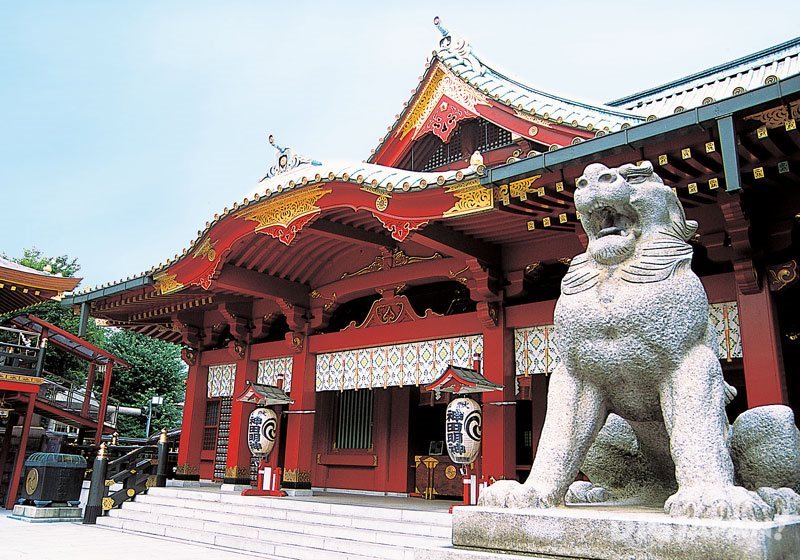 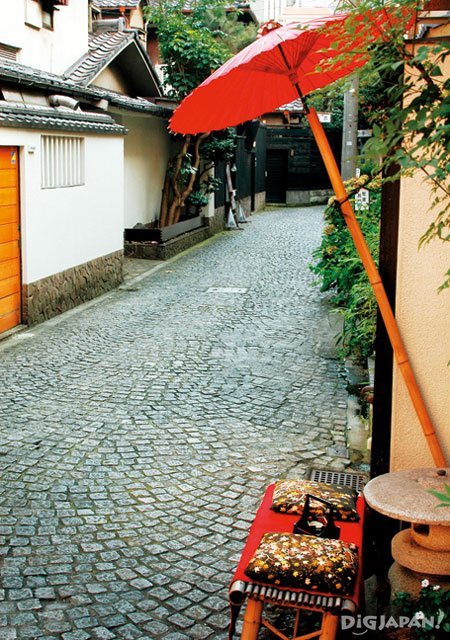 A street in Kagurazaka

The narrow streets of Kagurazaka wind like a maze. This area was once a prospering hanamachi, or geisha district, and remains to this day a place of traditional culture. This area is now also home to many delicious French restaurants. 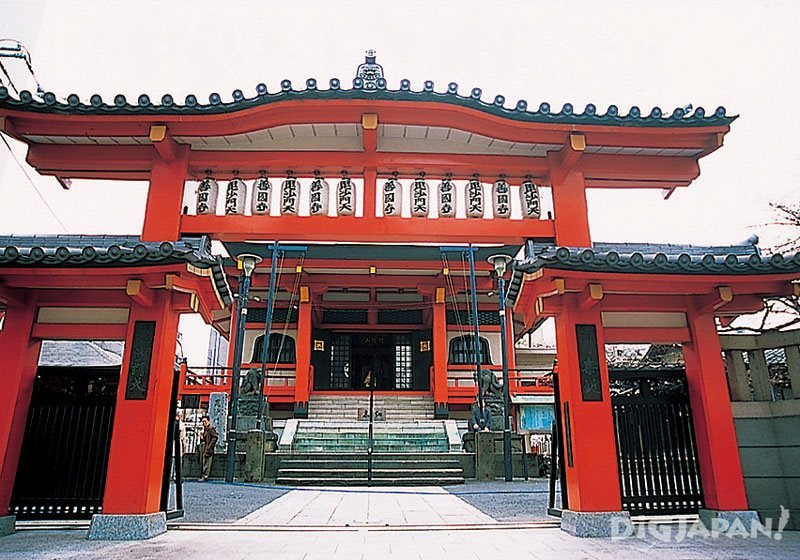 Spend most of your time between Kagurazaka-shita Crossing, located close to JR Idabashi Station, and Kagurazaka-ue Crossing. There are many alleys branching off from the main Kagurazaka-dori Street on which many famous stores and restaurants are hidden away. Be careful not to venture into the residential area as you may get lost on the winding streets! 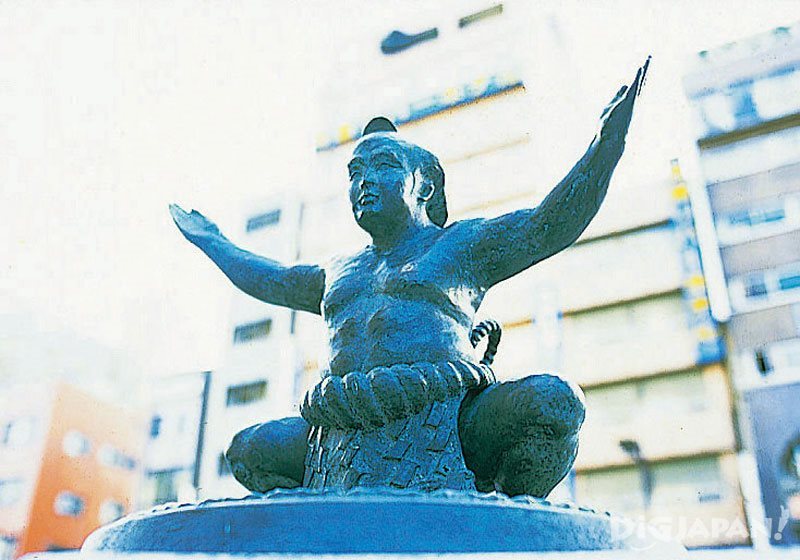 A statue of a sumo wrestler

Ryokoku is best known for the Kokugikan, a stadium built for sumo matches. There are many sumo stables-- places where sumo wrestlers practice-- in the area as well. As such, it’s not uncommon to see sumo wrestlers walking around! Nearby is Kuramae. This area famous for wholesale shops as well as trendy cafes and artists’ ateliers. 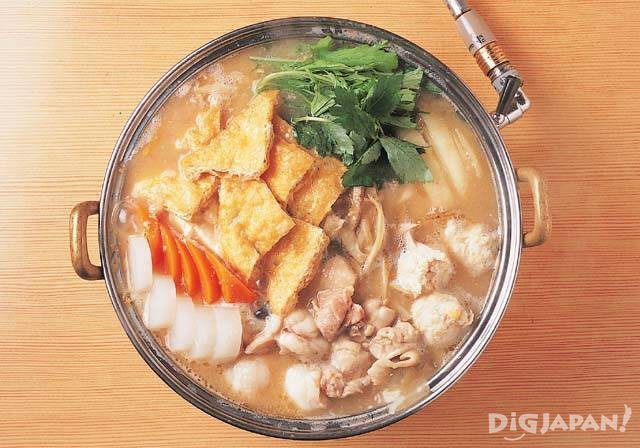 You can find many sightseeing spots as well as restaurants specializing in chanko nabe, a stew commonly eaten by sumo wrestlers, in Ryogoku by walking along Kokugikan-dori Street and Keiyo-doro Road. Meanwhile, there are two wholesale shopping areas around Edo-dori Street in Kuramae. 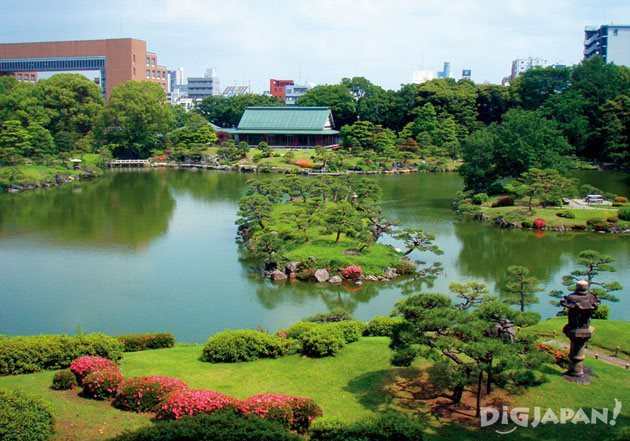 This area is home to many famous temples and shrines such as Tomioka Hachimangu Shrine and Fukagawa Fudo-do.There is also the lovely Kiyosumi Garden. It is a four-season garden, so you can enjoy beautiful scenery whenever you go. The Fukagawa Edo Museum with its replicas of what the Saga-machi area of Fukagawa looked like during the Edo period is another great choice especially on wet or cold-weather days. 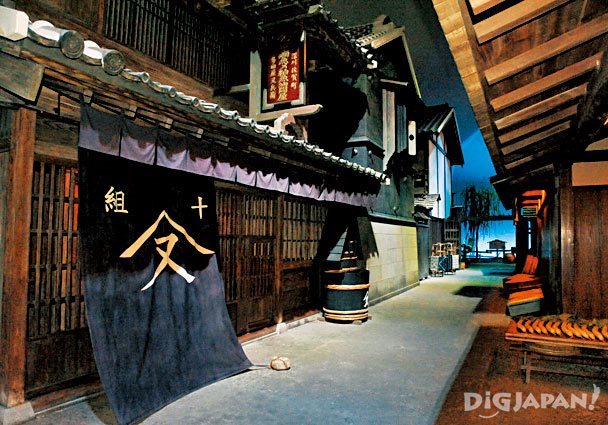 Part of the Fukagawa Edo Museum

After getting off at Subway Monzennakacho Station, head towards Morishita following Kiyosumi-dori Street. There are many sightseeing spots, galleries, and cafes in this area. Following this route will also take you to Kiyosumi Garden as well as over several rivers.

Do you have a favorite place in Tokyo’s shitamachi? Let us know in the comments!

What Kind of Place is Tokyo's Shitamachi? | DiGJAPAN!